Kilian Plunkett, the art director for Star Wars: The Clone Wars, is back to offer his final tips on cosplaying your favorite Clone Wars characters.

When we learned that Star Wars: The Clone Wars was returning with new episodes, we could barely contain our excitement (or, honestly, our tears) knowing that the adventures of Anakin Skywalker and his former-Padawan Ahsoka Tano weren't over yet.

But truth be told, fans have never stopped loving these characters, and the depth and breadth of storytelling that the animated series added to a period in Star Wars mythology that began as a single line of dialogue in A New Hope. Today, Kilian Plunkett, who served as art director for both Star Wars: The Clone Wars and Star Wars Rebels, is back with some tips for cosplayers perfecting their Togruta montrals and experimenting with Jedi general robes.

"As with Rebels and Resistance, there are two different basic approaches to take for cosplaying The Clone Wars," Plunkett says. "Either create an exact replica of what we saw on the screen or take some license to interpret what we saw into a more real world or, if you like, live-action movie look. Whichever way you choose to go, don't be afraid to experiment with materials and fabrication to achieve a costume you're happy with."

Previously, Plunkett and Amy Beth Christenson helped fans achieve their dreams of joining the Aces in Star Wars Resistance, and remembering Star Wars Rebels with insights and images to guide cosplayers in their crafty creations ahead of Star Wars Celebration Chicago. Today, Plunkett offers his final lessons in recreating some of the main looks from later seasons as well as a few special variations. 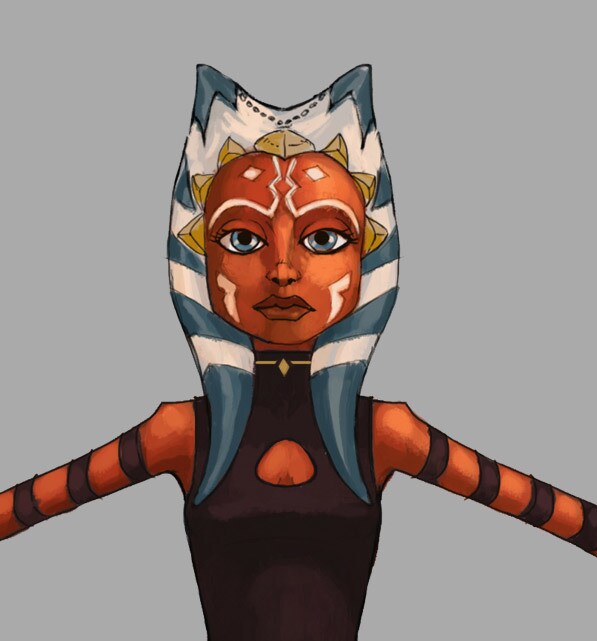 When the series leaped ahead in time for Season 3, so did the design of the characters. Ahsoka's look was more mature, reflecting the fact that she was older, taller, and maybe even a little bit wiser. "The Ahsoka Season 3 outfit looks like it would be a challenge," Plunkett says. There is a fair amount of detail, even in her animated design. A live-action version could include finer detailing in the leather tooling of her belt, boots, gloves, and tabard."

The designs were intended to help bridge the gap between Attack of the Clones and Revenge of the Sith by making characters like Anakin, who appeared on screen and in animation, look closer to their counterparts in the second film. Other intricate live-action Jedi costumes, like those of Ahsoka's fellow Togruta Shaak Ti, can also help guide you on your crafting journey. "Looking at the kind of stitching and engraving on live-action costumes like Shaak Ti and Luminara Unduli will give you a sense of what extra seams, buckles, and even ribbing could be added to Ahsoka's costume," Plunkett says.

Costumers and make-up artists up for an even bigger challenge may want to consider transforming this cosplay further -- to channel Ahsoka possessed on Mortis. "For the most part, the costume is the same as her standard Season 3 look, although it is covered in a layer of soot/ash to make it more sinister in appearance," Plunkett says. The look also calls for special Sith-like contacts. "Her eyes are Sith eyes in this version, just like Darth Maul's." And the usual orange make-up will need to be highlighted by a web of veins. "All of her exposed skin is covered in dark veins and her eyes and fingers have taken on a dark, bruised look," Plunkett says.

Anakin in Season 3 and pilot gear 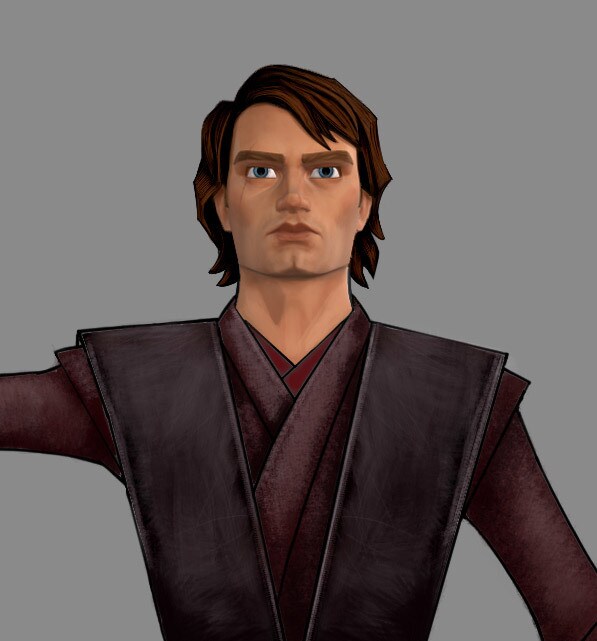 To transform into Anakin Skywalker as he steps closer to the edge of his downfall in Revenge of the Sith, designers updating Anakin's look for Season 3 consciously tried to bridge his more carefree and colorful armored costume from the start of the animated series, and get closer to his live-action counterpart's look in Revenge of the Sith. "The glove he wears in his right arm is much closer in detail to one seen in Revenge of the Sith, as is his tunic and leather tabard," Plunkett says. "If you're going for a live-action interpretation, the right glove, belt and boots could match pretty much exactly what's seen in his final Episode 3 Jedi look," he advises, "although the colors are a slightly warmer dark brown on the glove and tabard rather than the black of Revenge of the Sith. The cloth sections of his outfit are also lighter and warmer in tone."

For an alternate challenge, craft Anakin's Naboo pilot outfit from Season 2. The costume was based directly off of Captain Typho's uniform from Attack of the Clones, Plunkett says. "It was tailored to fit Anakin's proportions but all the fabrics and details on the costume are intended to make Anakin look like a typical Naboo pilot."

If you're aiming for realism, the Naboo pilot helmet seen onscreen in the first two prequel films is what you're looking to match. And you can even add back in elements that were left out for the animated series, like the goggles.

To create Obi-Wan's costume from Season 3, Plunkett and his team looked to Episode 3 again for inspiration.  "It's a close match to his Revenge of the Sith look with the exception of the sleeves on his tunic," Plunkett says. "The idea was that they have been gathered and tucked inside standard Clone forearm armor."

Completing the look can be as simple as copying the animated details on both the armor and Obi-Wan's gear, including his belt, boots, and lightsaber, "or swapping them out for the higher-fidelity live-action version," Plunkett says. "In either case, a small extra comlink device has been added to his left forearm. In a realistic interpretation, this could be based on the comlink we see Qui-Gon use while he's in Mos Espa in The Phantom Menace." 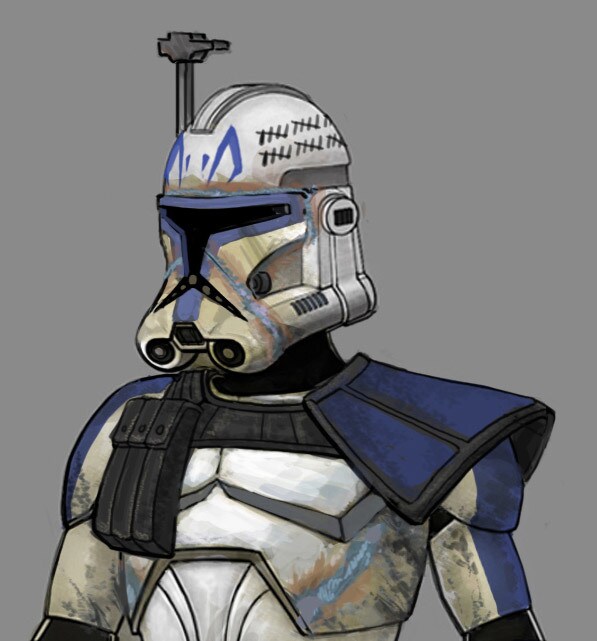 If you already have early Captain Rex armor in your cosplay closet, recreating his look from later seasons will take just a few special modifications that you can make yourself. "The thinking was that Rex trusted the first set of Phase 1 armor he wore and so he welded only a few new sections of the Phase 2 armor into place himself," Plunkett reveals. To account for the changes, animators drew in discolored blue-ish seams as evidence to the most discerning eye as to where the two sets of armor have been joined. "The chin on his helmet, for example, is Phase 2, but the rest of his headgear, apart from the 'fin' on the head, is still the original Attack of the Clones-era armor," Plunkett says.

The key to making Rex's armor look more realistic is to keep pieces from looking like too much of a match. "This gear is battle-worn, pitted, scratched, and scorched. There's a great opportunity to really weather this costume," Plunkett says. "Different sections of armor, even within the same piece, can be slightly discolored and mis-matched. From head to toe, it can be distressed, including the leather pauldron, holsters and kama." This is one case where organic imperfections in the crafting process can actually make the cosplay feel more authentic. 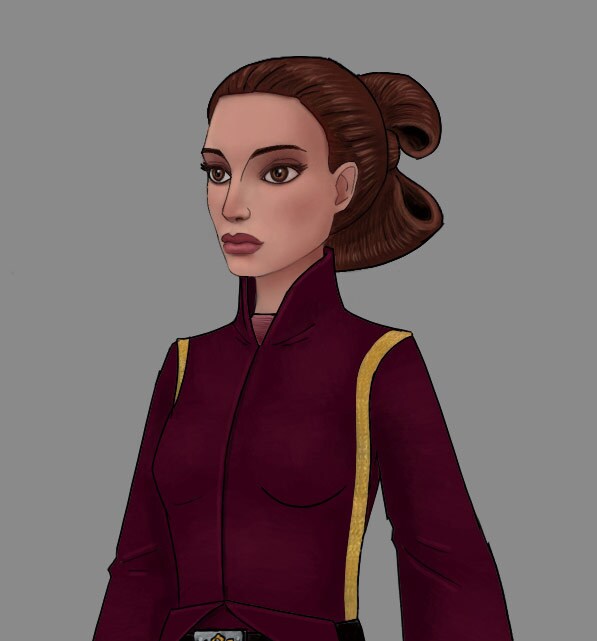 Padmé wore no less than 22 different outfits over the course of the show, sometimes channeling her live-action counterpart. For example, in Season 3, animators recreated her costume from the end of The Phantom Menace, as she stormed Theed Palace. "There's a lot reference for this costume, we really just simplified it  for The Clone Wars version," Plunkett notes.

"The same materials found on the screen-used version will look best," Plunkett says. "Some kind of velvet seems to have been used here, along with a more rigid metallic fabric for the shoulders. As with any of the characters we interpreted into The Clone Wars style, we pared down the amount of detail on things like boots and holsters, as well as the engraved hair clip." 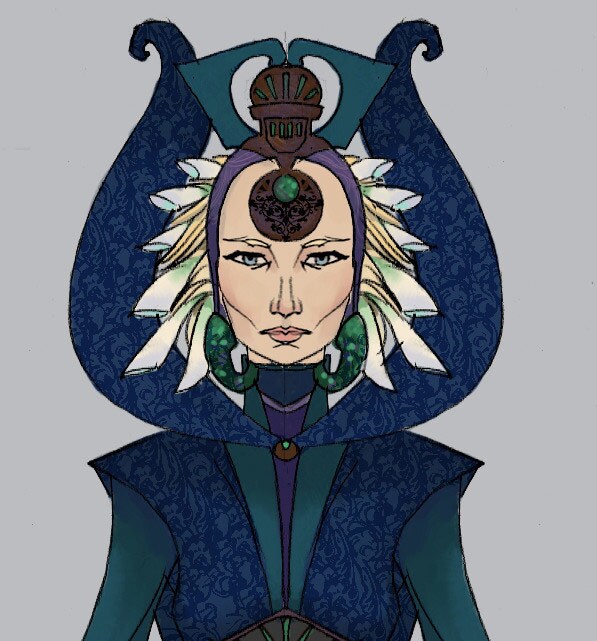 "In comparison to Padmé, Satine kept her wardrobe to a spartan seven different costumes throughout her run on The Clone Wars," Plunkett says, maybe even eight depending on how you're keeping track. Ambitious cosplayers may want to try their hand at recreating her intricate attire from "Voyage of Temptation."

"This gown is very ceremonial, very regal," Plunkett says. "It's designed to make a statement and involves multiple layers of printed or woven silk-like fabric."

Early designs called for vents in the skirt to give Satine some freedom of movement, but she was still limited by her massive headdress. "The headdress, made of a stiff frill with copper accents and flowers woven into the hair, along with jade earrings, is definitely a challenge," Plunkett says. "The orchid-like flowers could be recreated in a light fabric like satin but the rest of this outfit, with its draped layers and tassels along the hem of the jacket, would be quite heavy."

There's also the corset-like belt with inlaid copper piping. Plunkett recommends either leather or another silk-like cloth for that piece. "Both would be effective." 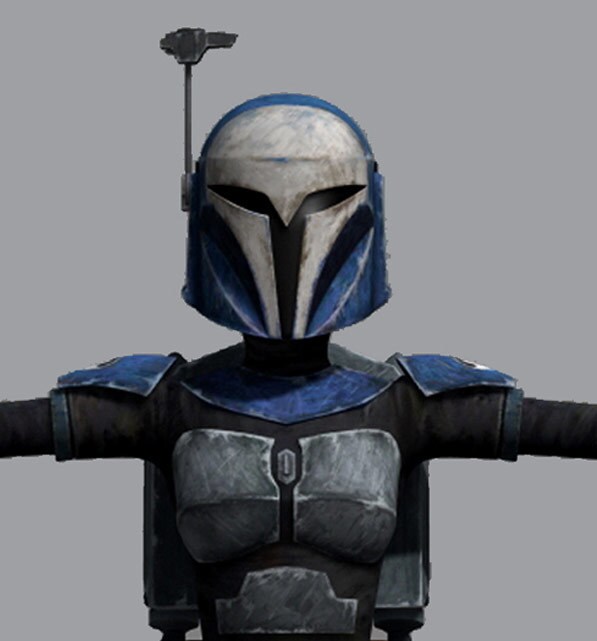 Ever the proud warrior of Mandalore, cosplaying as Satine's sister Bo-Katan means crafting traditional Mandalorian armor. "In many regards, it hews closely to the classic look sported by the Fetts, apart from the 'Night Owl' visor shape," Plunkett says.

Animators made Bo-Katan's armor form fitting, and you could create your own costume in this same style. Or, "taking the idea of this outfit into the real world, I'd consider using a base flightsuit that is much closer to Boba Fett's," Plunkett says. "Tailored or left loose, it'd be a good layer to build on for this costume."

As you add layers, stick closely to classic Mandalorian materials -- metal-looking armor, leather-look straps and holsters, and a padded upper tunic -- to complete the look. 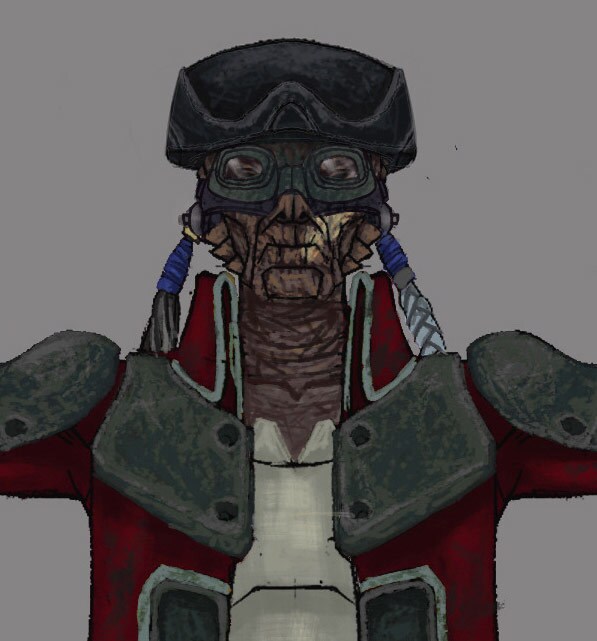 We recently got our first look at how the Walt Disney Imagineers have brought Hondo Ohnaka to life for Star Wars: Galaxy's Edge. "They did a great job translating him into real life," Plunkett says.

If you've also always wanted to be a Weequay marauder, Plunkett has just one recommendation: "Hondo is a pirate. He gets himself and his crew into enough trouble that none of his clothes are going to be pristine."

In other words, here's another cosplay costume where it's beneficial if it isn't too perfect. "Scuffing, fraying, and staining Hondo's outfit might help add another layer of interest to the most interesting Weequay in the Galaxy," Plunkett jokes.

We hope you've enjoyed Cosplay Command Center and we can't wait to see what amazing costumes you create for  Star Wars Celebration Chicago!