StarWars.com looks at the best moments from last week's comics, including the landmark finale of Marvel's Darth Vader series.

Comic Book Galaxy is back with a vengeance, with not one, not two, but three new Star Wars comics from last week that will be a fine addition to your collection. We look back on Han Solo #4, Star Wars: The Force Awakens #5, and the final issue of Darth Vader. Issue #25 of this landmark series was the one we’ve been waiting for, and we look at some of the high points (or, low points, if you just so happened to cross the Dark Lord) from this blockbuster finale. 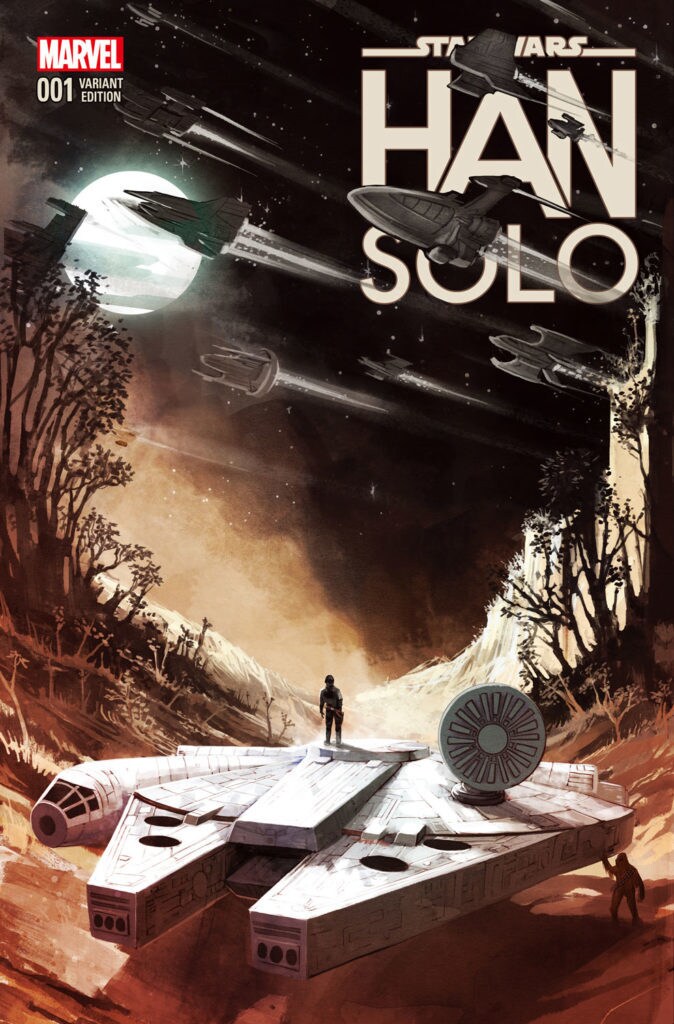 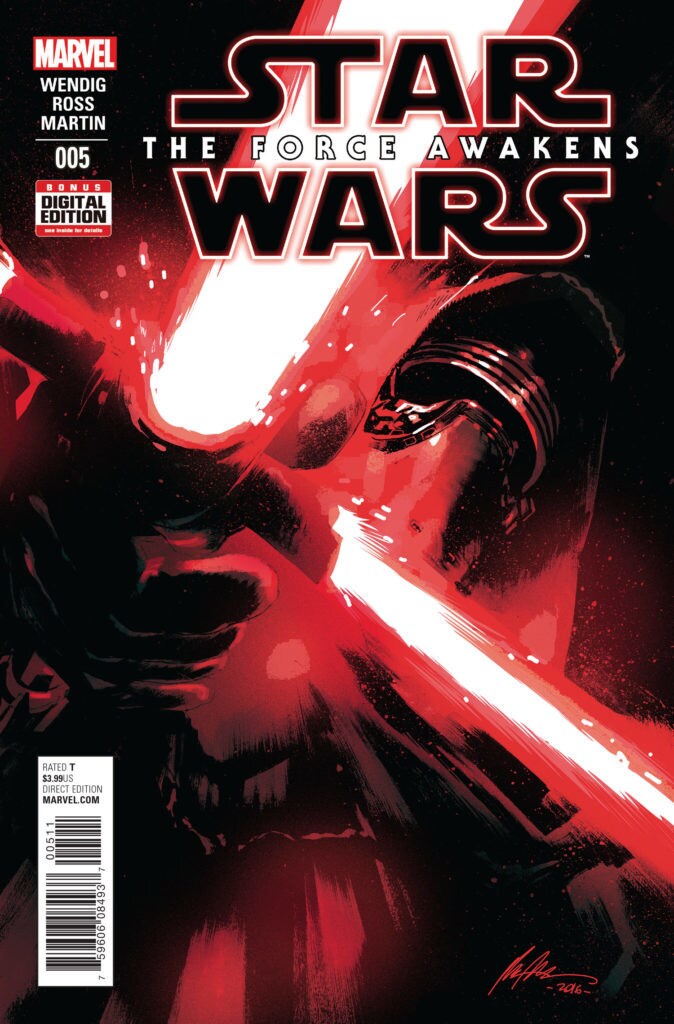 Alas, no new Star Wars comics today. However, there is still plenty to reflect on from last week. Off to Word Balloon!

SPOILERS BELOW! Please read Darth Vader #25 before you proceed. The Emperor commands it.

With the phenomenon that is Kieron Gillen and Salvador Larroca’s Darth Vader, a lot of expectations had been placed on how the series would wrap up. Many plot points and character conflicts needed to be resolved: what would happen between the Emperor and Aphra, and how would that impact the relationship between Sidious and his apprentice? How would Vader assuage the threat of Dr. Cylo’s regenerative capabilities? Will Triple-Zero and Beetee learn to play nice? Let’s proceed in chronological order. 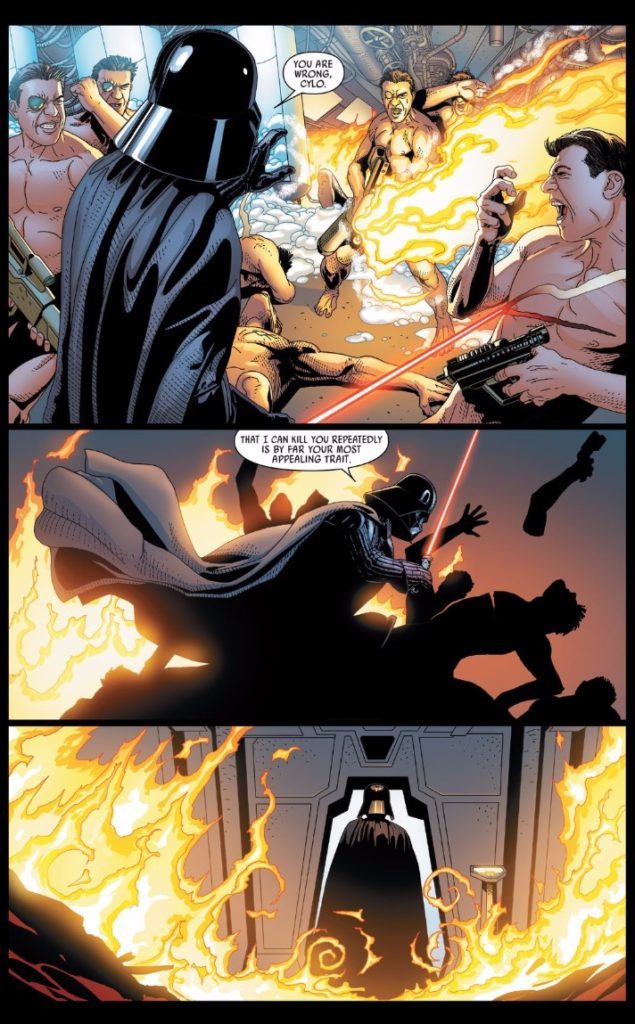 In issue #24, Vader seemed to put an end to the threat of Cylo, but the wily half-man/half-machine is able to resurrect himself as needed. Fast forward to issue #25: Vader is in “hot” pursuit of Cylo’s ship, with the intent of wiping him out. All of him.

We get to see the full arsenal in Darth Vader #25. Everything that makes Vader the most intimidating and dangerous force in the galaxy is represented here. It’s practically Vader’s greatest hits!

Let’s go down the list. Incomparable pilot: check. Master of the dark side of the Force: check. Lightsaber wielder extraordinaire: check. And let’s not forget, Vader is a man of few words -- but when he does speak, gravitas and evil emote through his mouthpiece. In other words, Vader talks some smack, and it’s awesome! Check out the wordplay as he stalks his prey.

Cylo isn’t coming back. Vader sees to that, and adds quite a bit of poetic irony, as well. Anakin Skywalker was transformed into the black armor of Darth Vader on the fiery planet of Mustafar, and Vader returns the favor by catapulting Cylo and his regenerative machinery into the sun. It’s Vader at his most vicious and unforgiving, and it’s hard to imagine Cylo coming back from this. Elimination of Cylo: check. 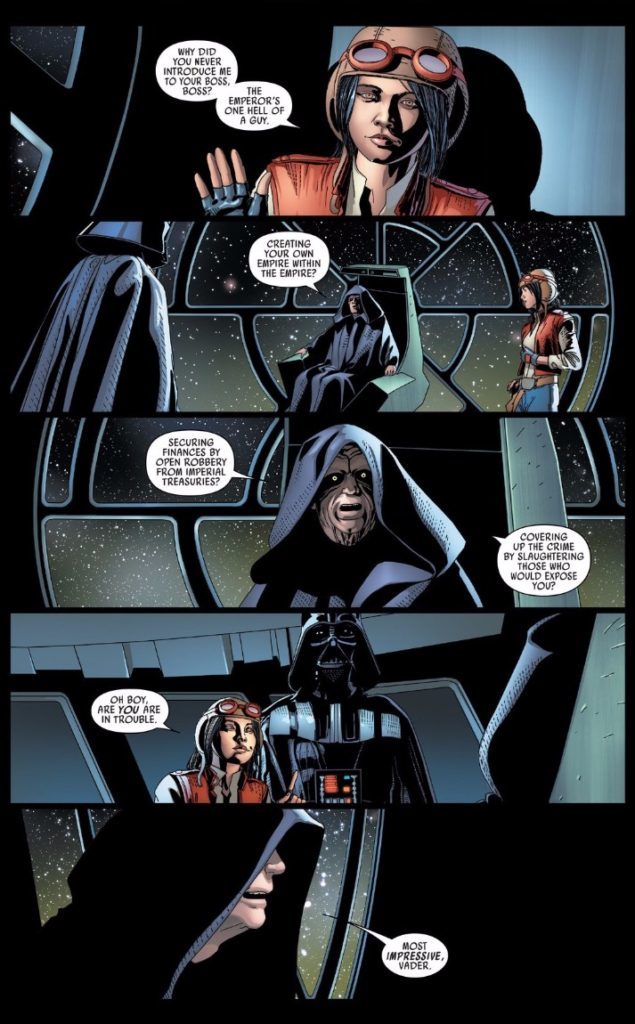 Dr. Aphra has an ace up her sleeve. She is well aware that Darth Vader plans to kill her, and since there’s really no safeguard for this, she needs to do something rather rash. The wheels were in motion at the end of #24, when she sought out the Emperor in his throne room. On purpose! No wonder Star Wars fans are enamored with her. She redefines what it means to be an antihero in the Star Wars universe.

The results are certainly not what she hoped for. Palpatine is full of surprises, and ironically, Aphra is the catalyst for even more danger and destruction in the galaxy. The reason: Palpatine is practically giddy that his apprentice has used stealth and subterfuge to subvert Palpatine’s will. It’s fair to say he’s overjoyed, and even complements Vader as a true Sith.

This mental chess game will have immediate impact on the galaxy, and it’s brilliant storytelling. Aphra’s attempt at betrayal ends up glorifying Vader’s betrayal, and ignites Vader’s rediscovered authority and voice in the Imperial regime. The Empire Strikes Back has more weight (if that’s even possible), because we know what got Vader back on top. He should thank Aphra, but we all know that isn’t going to happen. 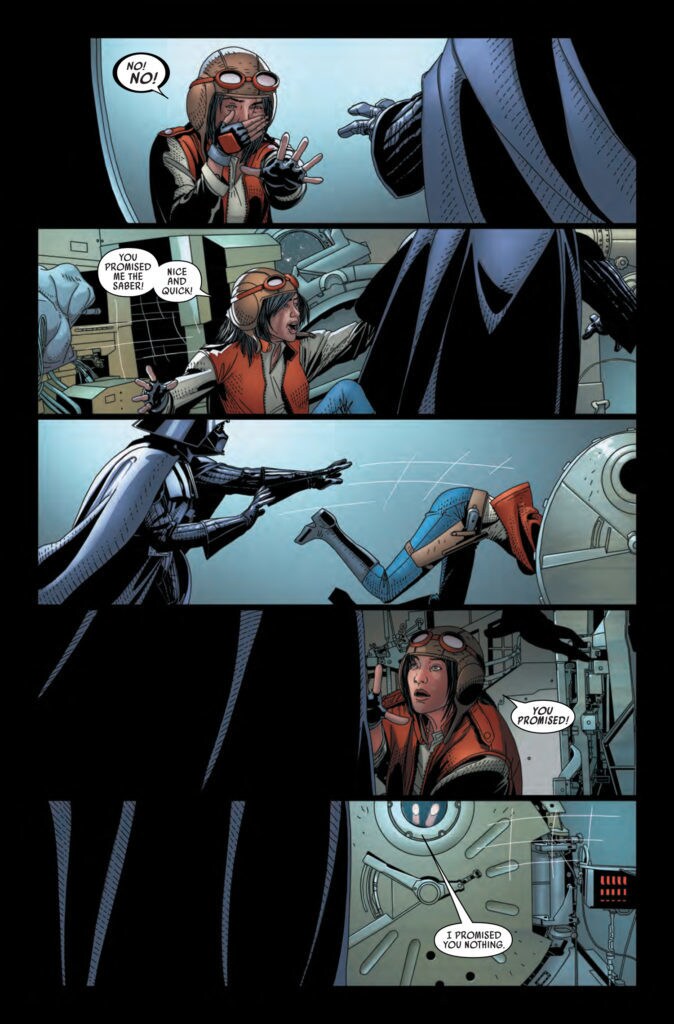 One of the nicest surprises about issue #25 was the fate of Dr. Aphra. StarWars.com and The Star Wars Show revealed the exciting announcement that Dr. Aphra would have her own series. But, how did we get here? Aphra was in Vader’s sights, and that’s not something you escape from. Not typically. Not ever.

But, Dr. Aphra is a new breed of clever in the Star Wars universe. At the conclusion of the first story in issue #25, Vader -- despite Dr. Aphra’s pleas for him to show mercy and use a lightsaber (as he originally promised) -- sends her out of an airlock and into deep space. The story ends. The reader gasps, laments the loss of the beloved rogue, and we turn the page.

This brings us to the second feature in the issue. Aphra lives! How? She’s crafty, that’s how. She uses the same device from the Son-Tuul Pride, and lives to see another comic book series. She actually dupes Vader, and manages to not only survive his wrath, but out-clever him. Knowing we will be able to talk about her further adventures in Comic Book Galaxy is awesome. Bonus: she’s bringing the trio of Triple-Zero, Beetee, and Black Krrsantan with her. Life is not going to be dull, or void of entertainment. We can’t wait!

What did you think of Darth Vader #25? How many times have you reread it? Are you as excited about the return of Dr. Aphra as we are?! Let us know in the comments below, and we will see you at the comic shop next week!