The story of the legendary Jedi duo is one of tragedy, friendship, and redemption.

Every Jedi needs a teacher -- and every Sith apprentice aspires to be a Sith Lord. Always Two follows the stories of teachers and students throughout the Star Wars saga, exploring their role in the story and what they learned from one another.

When I sat down to write about Anakin and Obi-Wan, I wondered what I could bring to them that hadn’t been said before. As heroes of the Clone Wars, Obi-Wan and Anakin suffered not just the tragedy of their duel during the fall of the Republic, but also the aftermath, almost two decades of living on opposite sides of the galaxy-spanning war. So much has been written about them before, and about how Palpatine slowly and subtly chipped away at Anakin’s trust in the Jedi in general and Obi-Wan in particular. So I'm going to talk about how that trust manifested in the prequel trilogy -- about how their relationship was built on it, how Palpatine manipulated Anakin’s trust, and how that trust was bent to breaking.

I’ve written before about Obi-Wan as a Campbellian archetype when it comes to his role in Luke’s story; he is the “supernatural helper” who guides the hero. However, when Anakin and Obi-Wan are introduced to one another they are both just starting their hero’s journeys. Anakin heeds his call to adventure, while Obi-Wan is just about to experience what Joseph Campbell calls "the Abyss," or a tragedy -- the death of Qui-Gon Jinn. The fact that the two Jedi met after such formative experiences -- Anakin leaving his mother and Obi-Wan losing a father figure -- might have made them even closer to one another. They were the only family they had left, and their brotherly connection made both of them stand out in the Jedi Order. Although Jedi were not supposed to form attachments, Anakin and Obi-Wan clearly established an almost familial relationship. The Jedi Council and Palpatine both noticed this and both sought to use it as leverage, playing Obi-Wan and Anakin against one another in Revenge of the Sith. 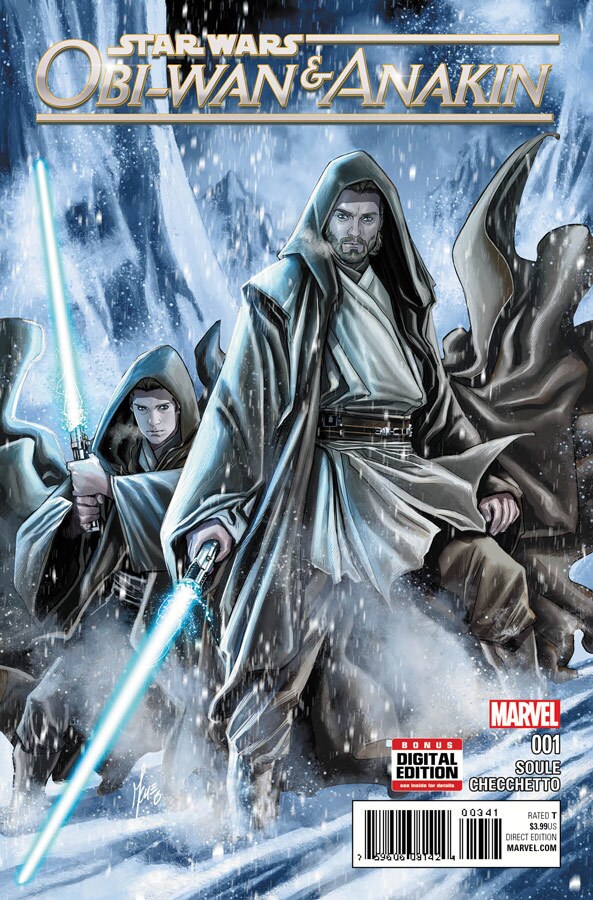 Some cracks show long before that, though. In the Obi-Wan & Anakin comic book series, the two Jedi are sent on a rescue mission to the ruined planet Carnelion IV. Anakin was considering leaving the Jedi Order, disturbed by what he saw as the hypocrisy of the Republic. For some Star Wars fans, this was a major revelation: Anakin had considered leaving the order before Revenge of the Sith, trading the life of a Jedi for a peaceful civilian existence? (Maybe he would have ended up as a navigator on a spice freighter. What a different world it would have been if Owen Lars had been telling Luke the truth.)

Leaving the Jedi wouldn’t have changed Anakin’s desire to help people, though. He wants to solve the galaxy’s biggest problems. When confronted with the warring factions on Carnelion IV, he immediately tries to find a way to take action, asking “what are we supposed to do?”

Obi-Wan’s goals in the same situation are more specific. He devotes himself to saving the crew of one airship, a temporary but kind gesture that Anakin didn’t spot in his need to solve the planet’s systemic problems. Anakin’s ambition is already affecting the way he sees the world: he is concerned less for individual people and more for grand reform.

That reform sometimes includes himself. In the comic, Anakin realizes that his decision to leave his mother might have been more about his perspective on life as a slave than about what was actually best for him. At this stage, Anakin doesn’t feel stifled by the Jedi Order per se, but feels wanderlust for the rest of the galaxy and turns to introspection when he can’t physically leave the temple on his own. He wants to leave both because he wants to have an adventure and because he isn’t sure that he made the right decision in the first place. Now that he has more context, his own young life with the Jedi looks different to him.

Obi-Wan respects this choice, and it’s notable that Obi-Wan does not argue with Anakin here. Instead, he goes to Yoda, who suggests that Anakin and Obi-Wan go on one more mission together because they both have a lot to learn. The comic also suggests that Anakin’s desire to fidget with machines is a manifestation of his need to make changes to the environment around him. He’s restless, and droids or pod racers can move at speeds fast enough to outrun his uncertainty.

By the end of the comic, Anakin has agreed to stay in the Jedi Order, but his inaction has opened him up to Palpatine’s pressure once again. One of those manipulations leads to another trauma for Anakin: when Obi-Wan faked his death in order to infiltrate a group of bounty hunters assigned to capture the chancellor. In Season Four of The Clone Wars, Anakin reacts to Obi-Wan’s death by devoting himself to violently hunting down his killer. It’s ironic when you think about what Darth Vader would later do.

The arc in which Obi-Wan goes undercover doesn’t focus on Anakin’s words after he finds out that Obi-Wan is alive. Instead, it shows him taking action. He becomes increasingly focused and increasingly determined to save the chancellor -- the very same one who preyed on Anakin’s insecurities in the first place.

We see Anakin’s self-destructiveness lead to tragedy in a much more literal way in the Darth Vader comics, in which Vader has a vision of himself literally killing the person he used to be. Like in the Obi-Wan & Anakin comic, Anakin examines his own choices and finds them lacking, declaring to his former self: “You were a child. I am well accustomed to killing children.”

Anakin re-imagines himself in both series, but one has much more violent outcomes than the other. His conflicted feelings toward his own upbringing -- and the loss of his mother in Attack of the Clones -- destroy his sense of self-control and cause him to lash out. When he can’t control the people around him, he begins to want to control the entire galaxy.

The bounty hunter arc of The Clone Wars Season Four also illustrates Obi-Wan’s willingness to deceive the people closest to him for the greater good, something that we also see later, in the original trilogy. The relationship seems repaired, but it is a patch over a wound -- one which Palpatine is happy to exploit.

The story of Anakin and Obi-Wan is not just a story of a friendship breaking. It’s also a story about two people who did a lot of good together, despite their differences. From starting a precarious peace on Carnelion IV to protecting the chancellor and bringing their skills to the many battlefields of the Clone Wars, Kenobi and Skywalker represented the best of the Jedi -- for a little while.