The author and Lucasfilm creative executive discusses bringing The Force Awakens characters to DK's hit book and much more!

Keeping track of who’s who in the galaxy far, far away recently got a little bit easier, with the release earlier this month of the Star Wars Character Encyclopedia: Updated and Expanded from DK. Written by Pablo Hidalgo of the Lucasfilm Story Group, this hardcover explores more than 220 characters and creatures seen in Star Wars films, including many new faces from The Force Awakens. This reference book combines fantastic imagery with essential facts and key biographical information to pull you into lives of heroes, villains, and others simply trying to make their way in the galaxy. With this new book coming out, StarWars.com turned to Pablo Hidalgo to answer some questions about this guide covering everyone from Aayla Secura to Zuckuss. StarWars.com: The new Star Wars Character Encyclopedia: Updated and Expanded covers characters and creatures from all the
Star Wars live-action movies, including at least 40 from The Force Awakens. How were characters for this edition selected?

Pablo Hidalgo: Space was tight in a book like this, since we could easily double it and still run out of room for characters. But that said, this book had to follow a specific format and a specific price-point, so we could only expand it a little bit. Knowing how many extra pages/characters we could tuck in there, the editors at DK proposed some characters. We also had to make the tough call of cutting out some of the characters in the original 2011 edition that just hadn’t had much storytelling added to their histories.

StarWars.com: What was the collaboration process like between you and co-author Simon Beecroft? Did you each have your own specific sections of expertise, or did you work together on the same pages?

Pablo Hidalgo: In this case, I wrote the new The Force Awakens entries. Simon is the credited author of the original entries. I also suggested edits made to the original entries to better reflect what we know about the storytelling now and where it’s going. The main reason DK tapped me to do the new entries is because I had just finished writing The Force Awakens Visual Dictionary at the time, so they knew I was grounded in the material. The long lead times in publishing meant that this book needed to be completed before the movie came out, so I had access to the necessary information. 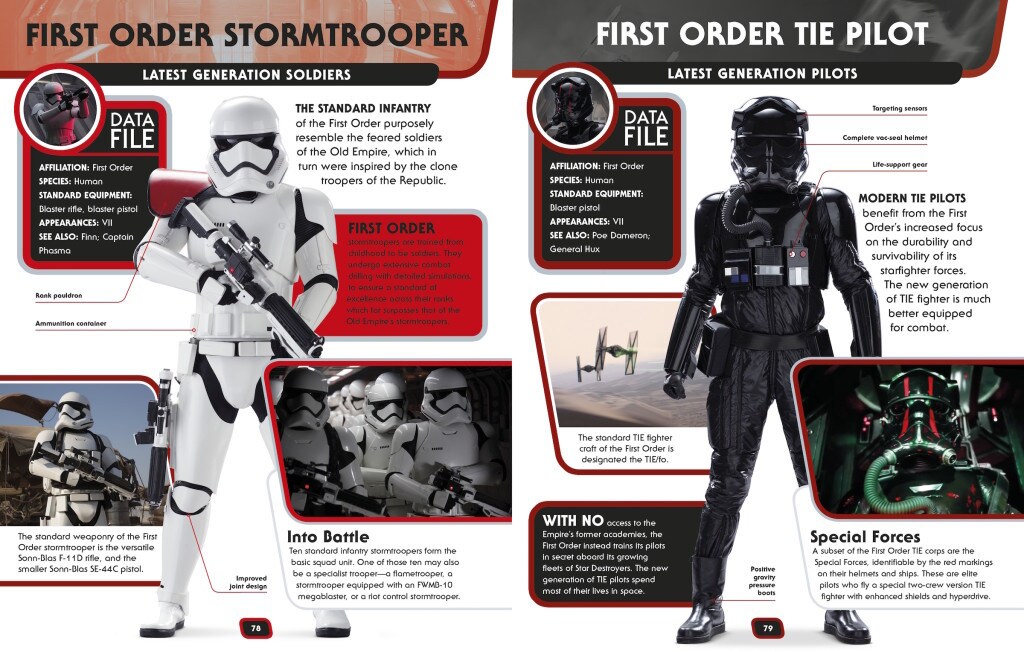 StarWars.com: A key component of DK guidebooks is the prominent use of images. What was the process of selecting images to be the main image of that character, especially when the character appears in more than one film?

Pablo Hidalgo: Again, this is where the experience DK had with the Visual Dictionary came in handy. They already had an awareness of what imagery existed for what characters, as well as what didn’t exist. So, for example, no print-ready imagery of Snoke existed at the time, so we couldn’t include him (though we would have liked to). In cases where there was an opportunity to update a character with a new image from The Force Awakens, we took it. It was great to see Nien Nunb properly represented (as opposed to inheriting a recolored Ten Numb photo). Because of when the book went to print, months ago, we still couldn’t use any new imagery of Luke Skywalker, though. Next update, then.

StarWars.com: What was the overall process of creating a layout? Do the images come first, or does the text?

Pablo Hidalgo: For the most part, the images came first. This book has a very heavily templated design, which makes it very browseable. As was the case with the Visual Dictionary, the book was designed first. Then I write to the design. There are X number of text blocks to fill, and even the annotations are called out visually first, and I write to the callout. In some cases, I’ll suggest a change to where a callout should point to if there’s something more interesting to identify.

StarWars.com: For characters of the saga that appear in lots of stories, such as Obi-Wan Kenobi or Princess Leia, how was it trying to write a profile that would still fit on one page?

Pablo Hidalgo: It’s tough condensing some rich character histories, but the idea is this book is similar to a pocket guide (although oversized). It’s meant to give you just enough of a grounding and be something you pluck off the shelf when your memory is nagging at you, or when you want to page across something new. So it was never intended to be a cradle-to-grave overview of any character. It isn’t even set at any particular time. The “present” is sort of specific to the character. 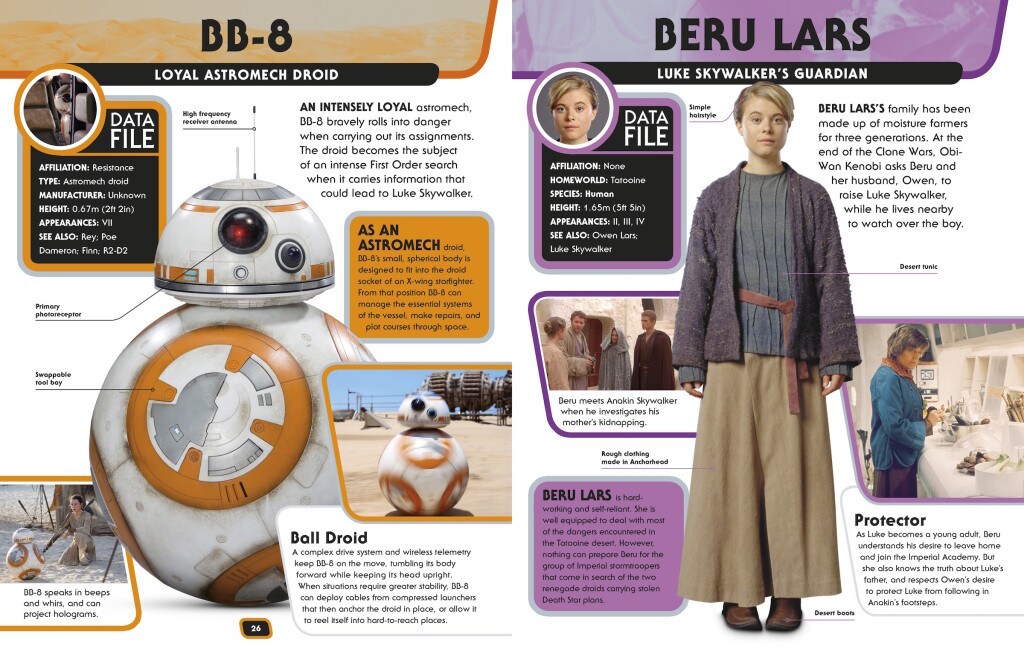 StarWars.com: Many of the pages simply summarize existing information from other sources, but every now and then, you were able to insert new knowledge about the characters, such as the name of Cliegg Lars’ first wife. How did you balance reviewing existing material (including pulling in information that was previously viewed as Legends) with inserting new information?

Pablo Hidalgo: Sometimes that is informed by something that is in development. Sometimes it’s information that seems solid and unlikely to change in the future. There weren’t that many outdated Legends ideas that needed to be reined in: Depa Billaba’s specific fate on Haruun Kal, General Veers’ family life, for example. The last edition of the book from 2011 already did a great job of emphasizing the screen canon of George Lucas’ universe and less so the Expanded Universe lore of the time.

StarWars.com: While only imagery related to the movies was used, there are references to characters and events from The Clone Wars and Star Wars Rebels. How did you decide when to include that information?

Pablo Hidalgo: Generally if it was noteworthy to the character’s history. For a character like Barriss Offee, you had to include material from Star Wars: The Clone Wars, as it was quite literally the most important thing to happen in her life. 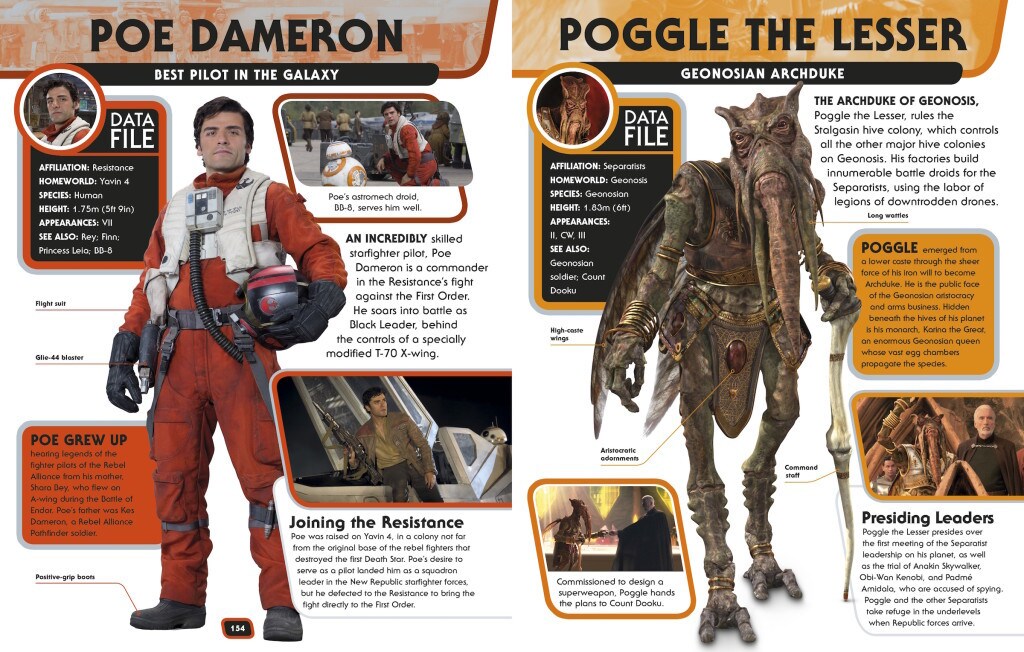 StarWars.com: This encyclopedia is designed to be accessible to readers of all ages, yet contain enough depth to satisfy serious fans. As you developed it, how did you work to achieve both goals? Also, how was the balance in revealing story information versus not revealing certain plot points of the saga?

Pablo Hidalgo: This book shouldn’t become a substitute for the stories referenced inside. We knew it skews to a younger audience, so it’s less about being an exhaustive account of a character’s history and more an accessible entry point for kids who want to know more.

StarWars.com: I noticed that some characters such as Queen Jamillia and Biggs Darklighter get mentioned and pictured in other entries but lack their own individual profiles. Are there any characters or creatures that you wish you had the space to include?

Pablo Hidalgo: As a huge Ratts Tyerell fan, I do wish the podracers were broken out to individual entries. But, there are 18 of ‘em and it’s hard to justify getting all of them in there.

StarWars.com: I bet if you did have a guide that contained all the podracer pilots, Sebulba would love to get his hands on it!