Get a first look at Devin Schoeffler’s beautiful new image set, available now in a timed release, and hear insights from the artist himself.

When artist Devin Schoeffler was growing up, Star Wars was more to him than just a few exciting space fantasy movies.

“My dad introduced me to Star Wars when I was a kid. I remember watching them on VHS on our small color TV. At the time I think the themes and plot were maybe a bit over my head, but I was definitely drawn to the overall aesthetic of the films,” he tells StarWars.com. “They just looked so cool.”

That early exposure and appreciation of the films’ art design reflect brilliantly in his new Star Wars poster series. Schoeffler has created three beautiful paintings for ACME Archives, all celebrating the films of the original trilogy -- "The Fourth" (Star Wars: A New Hope), "The Fifth" (Star Wars: The Empire Strikes Back), and "The Sixth" (Star Wars: Return of the Jedi) – that look something like long-lost cover art for the coolest VHS box set that never was. Each focuses around the iconic design of one classic character -- C-3PO, a stormtrooper, and Darth Vader, respectively -- with heroes and villains peppering the right side of the image. Together, they tell the story of the movies. “The films definitely made an impression on me,” Schoeffler says, “and helped form my love for everything sci-fi and pop culture.”

Schoeffler’s posters ($45 each, $125 for the set), printed on pearlescent paper, are available from now until Monday, July 6, at 9 a.m. PT. on DarkInkArt.com. StarWars.com is thrilled to reveal the three images below, and asked Schoeffler for commentary on each, along with a peek at his process. 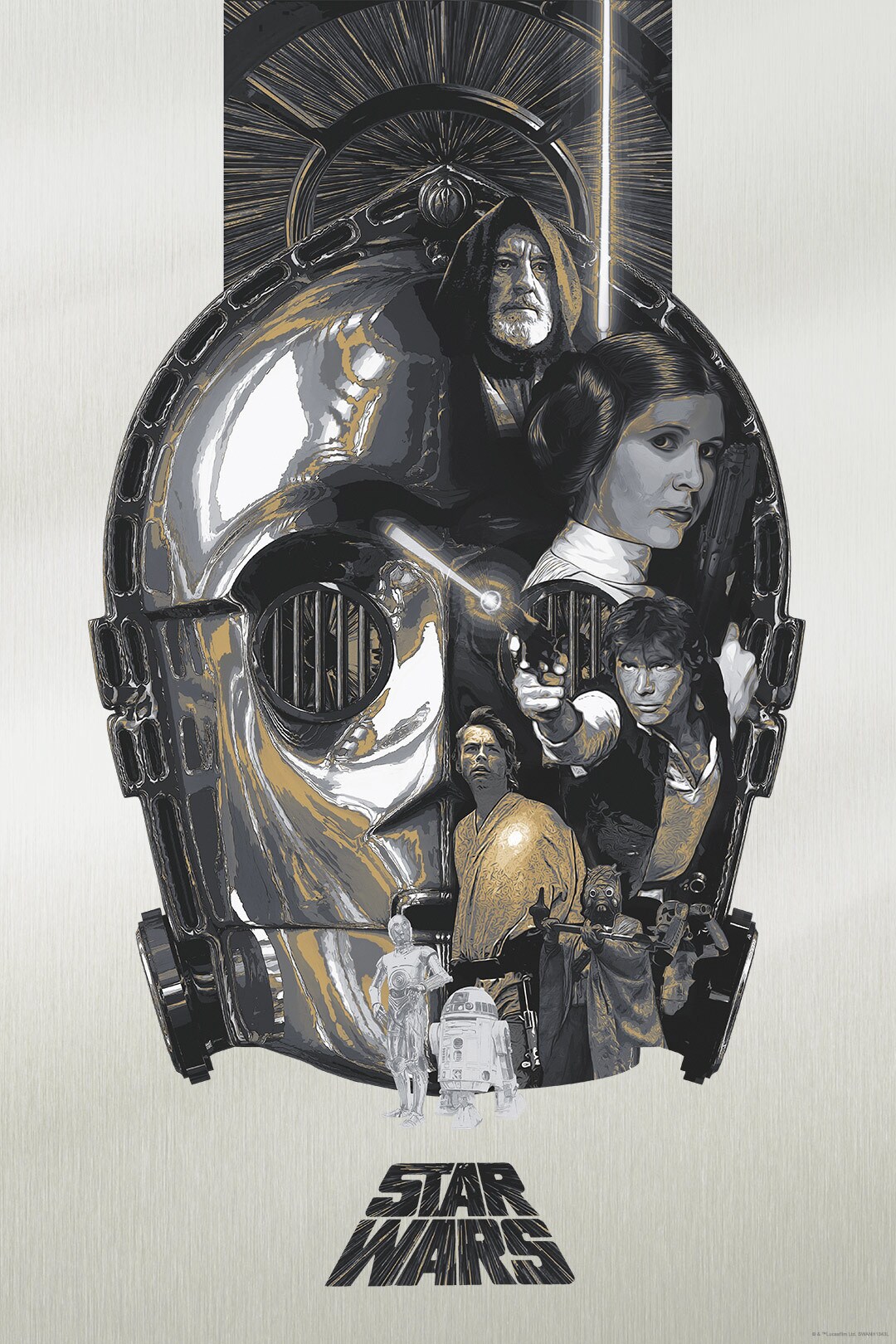 “Once I decided on a direction, I started with a couple of quick sketches to figure out the types of compositions I thought would work. For A New Hope, I chose to feature C-3PO prominently because the highly reflective nature of the mask looked really interesting and detailed. Each of the masks were actually rendered in 3D then toned and re-drawn to give it a more graphical look.” 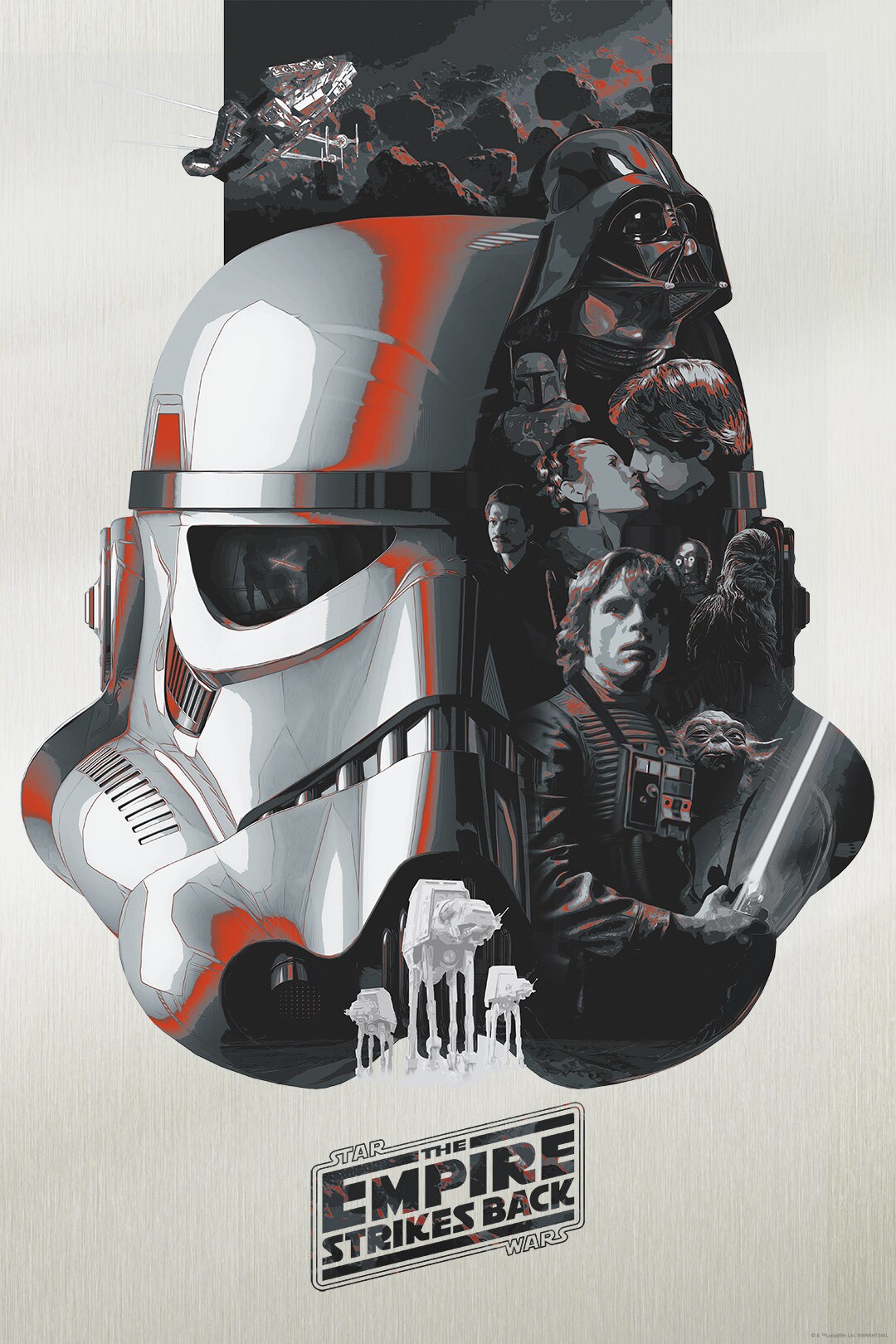 “On Empire Strikes Back, I initially thought about featuring a snow trooper, but I kept coming back to that classic trooper design. I do like how the bottom of the trooper’s mask helps form the snow banks for the AT-ATs. In each of the pieces, I had more going on in the negative space but ultimately decided to drop a lot of it to keep the compositions cleaner. Empire has so many more featured characters than A New Hope -- it was tricky to fit them all in without it feeling too cluttered.” 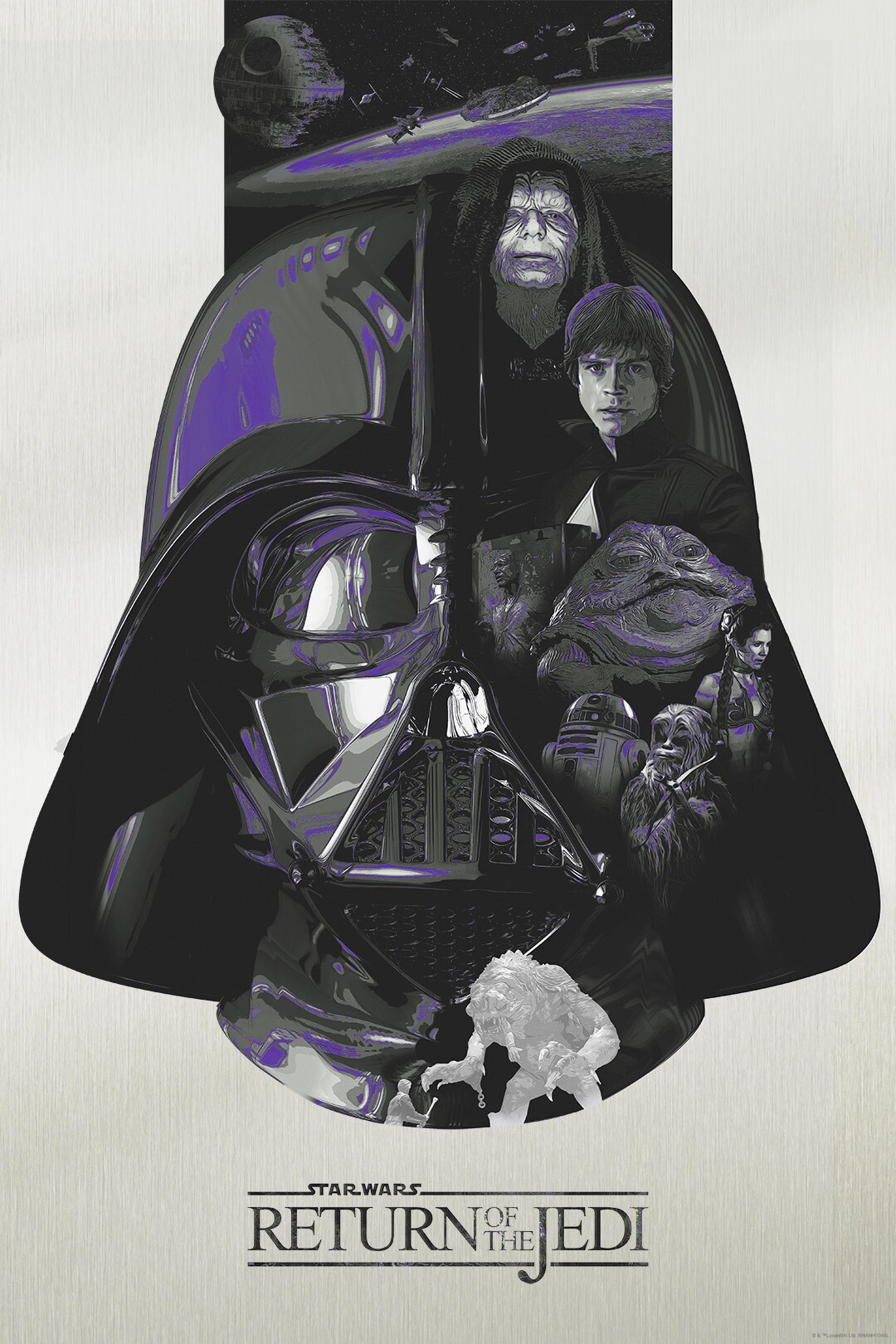 “The most challenging part on the Return of the Jedi piece was figuring out a good highlight color. I started with green since that was the color of Luke’s new saber, but it just didn’t fit quite right. After some discussion with the folks over at Acme Archives Ltd., they suggested I try purple and I think it really fits well with the other two pieces.” “For all of the pieces I use a variety of techniques to build out the final piece, including using 3D renders, hand-drawn elements, and photos all combined and unified digitally to give it cohesive feel. I hope fans like the mix of nostalgia with the more highly stylized graphic-design spin. I really wanted to make something that was a balance of retro and modern design elements that could work on their own or together as a series.”