5 Iconic Star Wars Sound Effects and How They Were Made

Want to play a game with your friends? Open the Star Wars Soundboard and choose a list of your favorite sounds from the films. Play them and see how many of the effects your friends can name. The sounds of Star Wars are so eminently recognizable that they stick with you even if you've only seen the films a few times. Sound designer Ben Burtt did remarkable work by gathering sounds in the field and manipulating them in imaginative ways. His efforts added to the worldbuilding and made the Star Wars universe a more realistic, complete place. These are five of the iconic sounds from the saga:

1. Beeps and boops.
R2-D2 wouldn't be the same without his whistles and beeps. They tell us what he's thinking and feeling; he wouldn't have as complete a personality without them. Burtt said his first attempts at creating Artoo's voice were too electronic. He used a synthesizer, but he couldn't capture emotion with it. He tried something else. He said, "We ended up with a 50/50 mix of electronic synthesizer-generated sound and my voice making funny inflections. The combination camouflaged the two sources, and we found that we could get Artoo to act. But it was something that we arrived at very slowly." [Source: Starlog Magazine 103]

2. The breathing heard around the world.
You can sometimes hear Darth Vader before you can see him. The sound of the Sith Lord's breathing adds to the intimidation factor. It emphasizes the fact that he's more machine than man and makes him more ominous. Burtt created the sound by placing a microphone inside a regulator on a scuba breathing apparatus and breathing into it in different ways. [Source: The Sounds of Star Wars]

3. The sound of battle.
When attending any sort of Star Wars event, the sound I hear fans replicate the most is the distinctive thrum of a lightsaber. The elegant weapon comes with a range of noises -- powering up and down and strikes in combat -- but they're all familiar. Burtt said the noise was there from the beginning: "Oddly enough, it was the first sound I ever made for Star Wars. When I read the script, I immediately had something in mind. It was an old motor on a projector at the USC Cinema Department. I went and recorded it right away. The humming sound was partly based on that motor." [Source: Star Wars Insider #26]

4. Start your engines.
The roaring sound of cars speeding around a race track is memorable, and it's the same with podracers. The variety of noises present in the podrace is staggering; they immerse you in the event. The sounds of the engines throughout the race particularly stand out. Each vehicle was different because Burtt gave each of them a personality. His team used the sound of actual engines from cars such as Porches and Mustangs and tools such as the Kyma (a sound synthesizer) and wave-table chopper to make the podracers come to life. [Source: The Sounds of Star Wars] 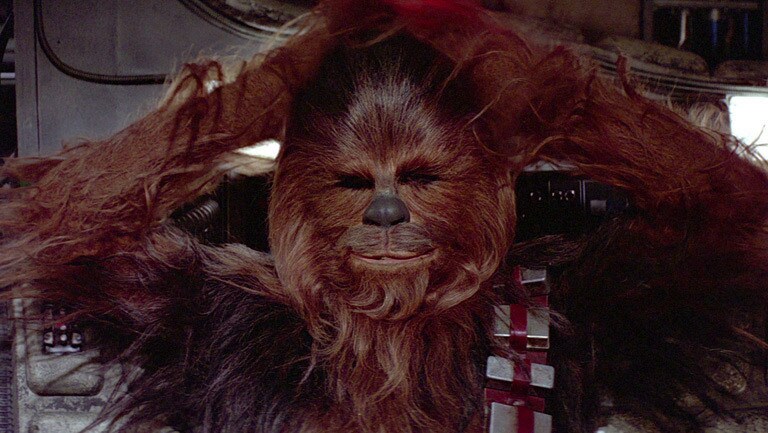 5. Growling and howling.
Though many people can imitate the sound of the Wookiee language of Shyriiwook, it's not a spoken language. Burtt put together Chewbacca's voice using sounds he collected from animals such as bears, badgers, and walruses. He took pieces from each recording, categorized them by emotion, and cut them together to make Chewie's speech. [Source: Ben Burtt Interview]

Which Star Wars sounds would you add to this list?