5 Highlights from Star Wars Forces of Destiny: “Bounty of Trouble”

Leia and Sabine must outwit some stormtroopers...and survive IG-88.

In a fitting finale to the eight-episode arc, the Forces of Destiny micro-series brings together two formidable heroines on a covert mission for the Rebellion, pitting them up against one dreaded bounty hunter and a whole legion of stormtroopers. This time, the rebels must capture Princess Leia and a stolen data tape of Imperial base locations without blowing her cover. The short emphasizes the importance of working together and serves as a reminder that whether you're a senator or a citizen, operating as part of a team or on the outside looking in, we can all make an impact by doing our part. Here are five highlights from the short, “Bounty of Trouble” — which you can watch below!

Leia's capture takes advantage of Forces of Destiny's medium and tone, between the lasso that pulls her around the corner to safety and the bomb that goes off with a splatter of...paint? It's a gentle reminder that even though the characters and situations are familiar, this series retains its own sense of style. Speaking of style, Sabine's vivid blue hair from the second season of Star Wars Rebels is back, hidden beneath the unique helmet of her Mandalorian armor. The two characters previously came together in “A Princess on Lothal,” but it's great to see them teaming up to once again outsmart a legion of stormtroopers. 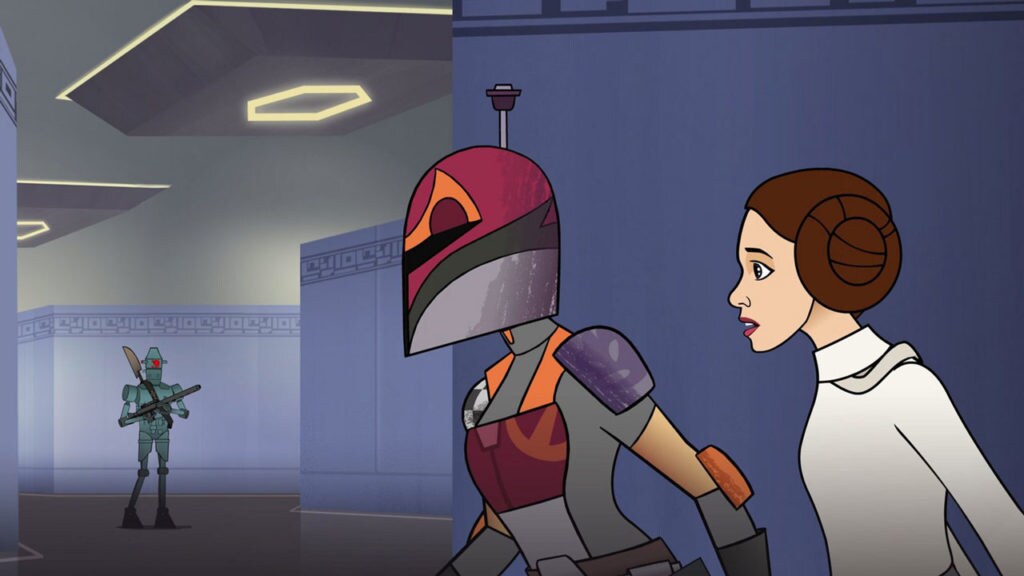 The battered chrome exterior. The clanking sound in every step. Leia may be surprised by the appearance of IG-88, but Sabine has that same resignation in her voice she's perfected over countless missions that never go quite according to plan. (And really, how great was it to see IG-88 in action?) Leia has always been a quick thinker, but pitting both her foes against one another is a fine showing of the young senator's shrewd cunning. Plus she delivers the order with all the confidence of an Alderaanian royal and future general. As the two heroes say their goodbyes, Leia pulls her hood back over her intricate hair. It's the inverse of that first moment we met Leia in A New Hope, when she pulls down the hood and steps into the shadows after stowing a different set of plans in Artoo. A fitting tribute to the saga's original heroine.

What were your favorite moments from “Bounty of Trouble”? Let us know in the comments below!

The Galaxy Far, Far Away and Motherhood

Quiz: Which Leia Organa Are You?