15 of the Scariest Star Wars Villains

Adventure? Excitement? Not when you run into these folks.

When you truly think about it, the Star Wars galaxy can be a terrifying place.

Whether sneaking through the darkened passageways of a Hutt’s desert stronghold, running steps ahead of slavering rathtars aboard a heavy freighter, or simply trying to get a drink in a spaceport cantina…every step around a blind corner can bring one face-to-face with unusual creatures and sinister faces. Despite a universe packed with deadly beasts (the Sarlacc, anyone?), though, it's the villains that truly strike fear into our heroes' -- and our own -- hearts. Their horrible visages, terrible backstories, and malicious actions make these few intimately and instantly scary.

Here then, are 15 truly frightening Star Wars characters -- just in time for Halloween!

Glowering down from the deck of the Executor, clutching his Relby-v10 mortar gun in his grip, the Trandoshan bounty hunter with a thirst for Wookiee pelts makes quite an impression on Admiral Piett in Star Wars: The Empire Strikes Back. Despite his silent debut, Bossk proves himself a wild card and a threat again and again -- particularly when partnered with Boba Fett and his Syndicate during the Clone Wars. But it’s Bossk’s presence…the scales and fangs, and his penchant for hissing…that earns him a place on our list.

With deep-set eyes and bone-white skin, bounty hunter Aurra Sing stirs up visions of skeletal horrors as she guns her unfortunate prey into oblivion. Aurra gleefully partners with the worst the galaxy has to offer, including Cad Bane and the aforementioned Bossk, with whom Sing coldly jettisoned a pod filled with Republic cadets into space simply because they knew too much. Her skills as a sniper make her one of the most notorious -- and feared -- hunters in the galaxy. 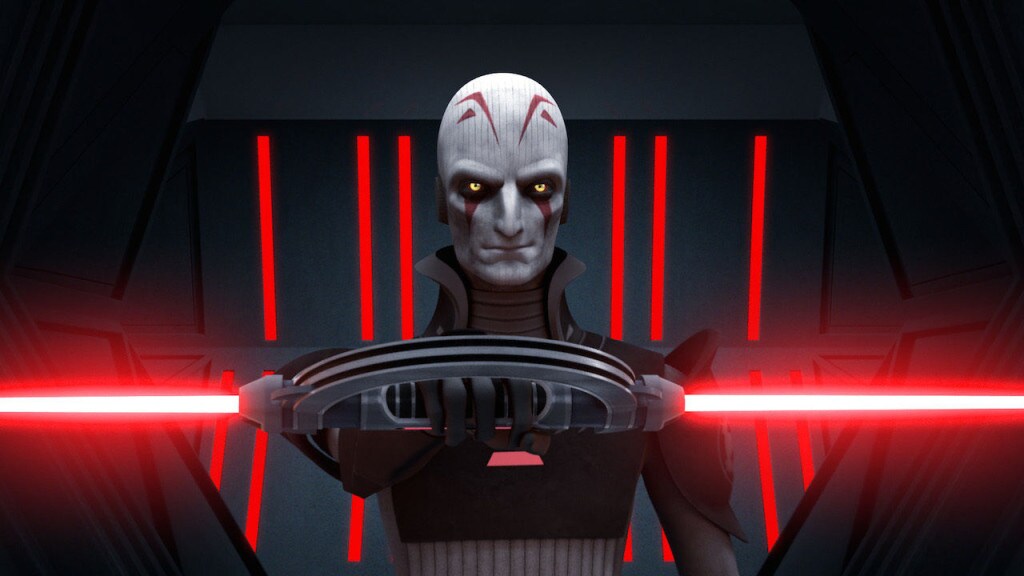 Piercing yellow eyes, razor-sharp teeth, and a cruel, double-bladed lightsaber provide pause for any who dare run afoul of the Grand Inquisitor. Like most Pau’an males, the Inquisitor is gifted with an intimidating appearance that serves him well on his hunt to track down and eliminate the last of Jedi following the Clone Wars. 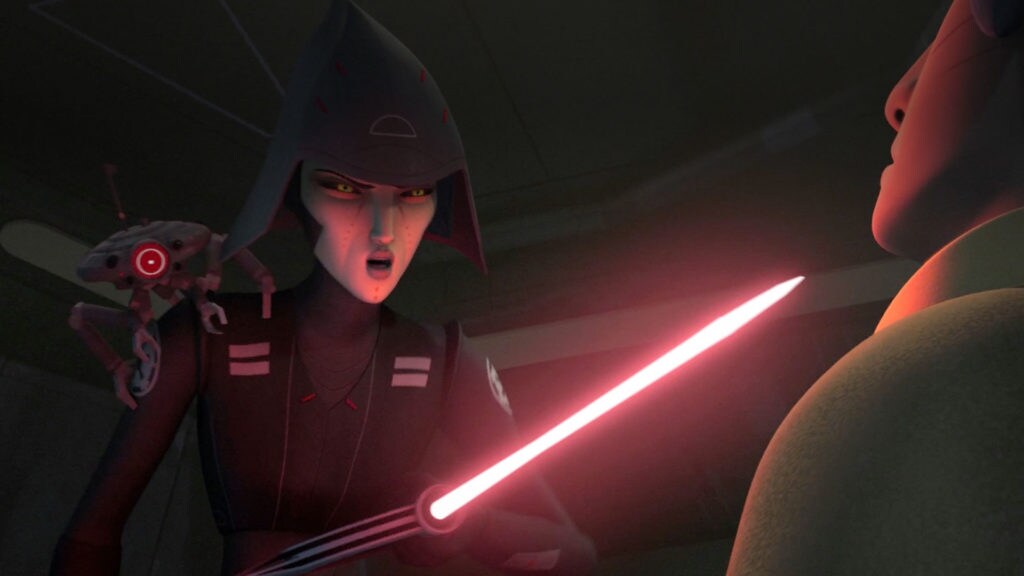 Several other elite Jedi hunters became known to Ezra Bridger and his band of rebels -- including the Seventh Sister. Armed with a cadre of ID9 seeker droids, the Spectres first ran afoul of the Mirialan Inquisitor as she stalked Bridger and Sabine Wren aboard an abandoned medical station. With a plan and the bold cunning to carry it out, the Seventh Sister proved a dogged enemy to both the rebels and former Padawan Ahsoka Tano as the latter fought to prevent Inquisitors from seizing Force-sensitive children throughout the galaxy. Deadly with a lightsaber, determined, and manipulative, the Seventh Sister remains a constant, menacing threat to Bridger’s friends. 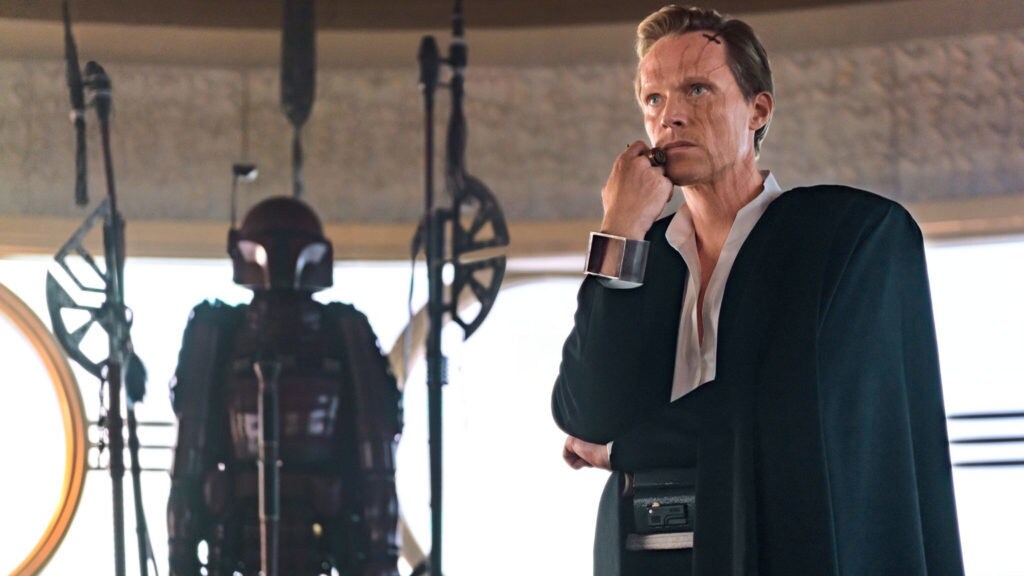 A gentlemanly veneer and refined taste for art can hardly hide the gangster's taste for ruling through fear. Though Vos surrounds himself with exquisite antiquities and the very best the galaxy has to offer, his cultured exterior masks the vengeful murderer beneath. With a smiling, glad-handing demeanor that can turn to rage with little to no warning, Dryden Vos earns his place on a list of scary villains by virtue of both his calm, understated ruthlessness and his fiery, vindictive anger.

A dead world full of whispers and ghosts is Dathomir, awash in blood-red light and littered with ruins and haunting forests. Beneath their stone fortress, the witch-clan known as the Nightsisters practices dark magicks and remain separate from galactic politics. Calculating and sinister, serene in their power and total in their control over the Nightbrother males, the coven of warriors and witches led by Mother Talzin make for a ghastly sight to anyone foolish enough to cross them. 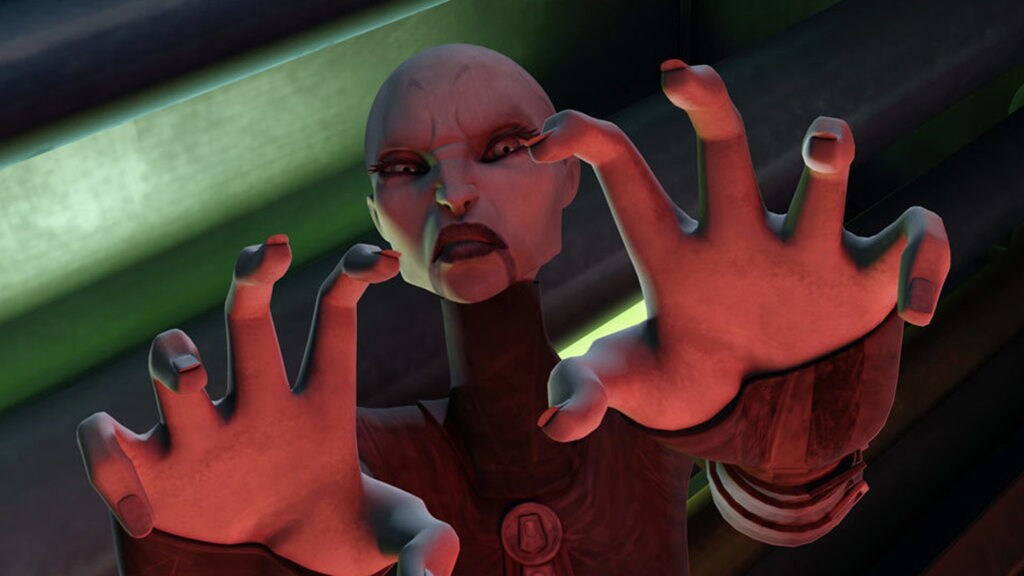 One cannot speak of the Nightsisters without mentioning their most well-known assassin, the failed Jedi Asajj Ventress. Sharp features, cold eyes, and even-colder presence make Ventress a force to be reckoned with by any who dare to cross her path. Armed with twin, blood-red lightsabers and dividing herself between Nightsister roots and new bounty hunter companions, calculating Ventress truly elevates herself into a class of fear all her own. 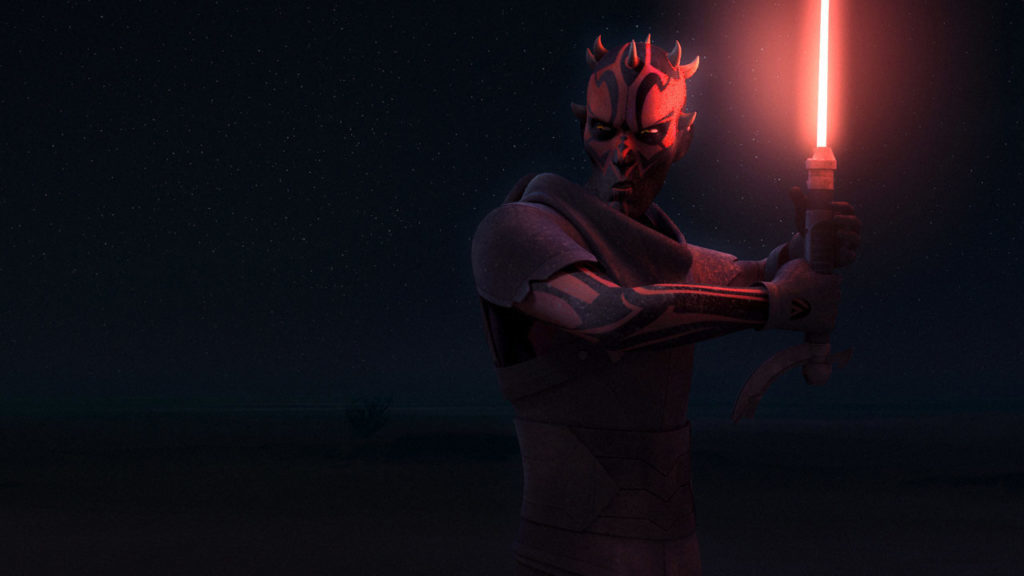 First beheld as Darth Sidious’s apprentice in Star Wars: The Phantom Menace, the Zabrak chills us to the bone with his soft-spoken ways and deadly skill with a lightsaber. Over time, Maul proves no evil to be above his undertaking -- from the outright murder of Qui-Gon Jinn on Naboo, to the stranglehold on the galaxy’s crime syndicated during the Clone Wars, right up to his seduction and eventual betrayal of Ezra Bridger on both Malachor and Tatooine. A whirling dervish, a devil with a two-bladed saber, Maul’s shocking tattoos caught our attention from the start, and all of his subsequent, frightening appearances have left both dread in her hearts and chills down our spines. 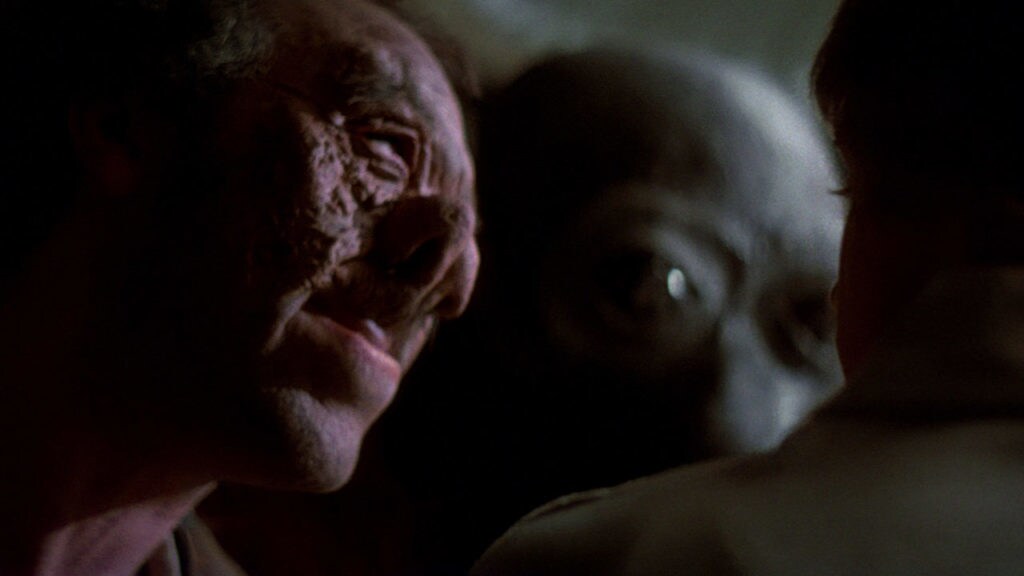 He really doesn’t like you. That’s cool, though -- the off-kilter former surgeon doesn’t like most people, according to his soon-to-be-armless Aqualish pal, Ponda Baba. Known for conducting illegal and dangerous medical experiments, the filthy smuggler picked the wrong being to hate when he attempted to bully and attack Luke Skywalker in the Mos Eisley cantina. 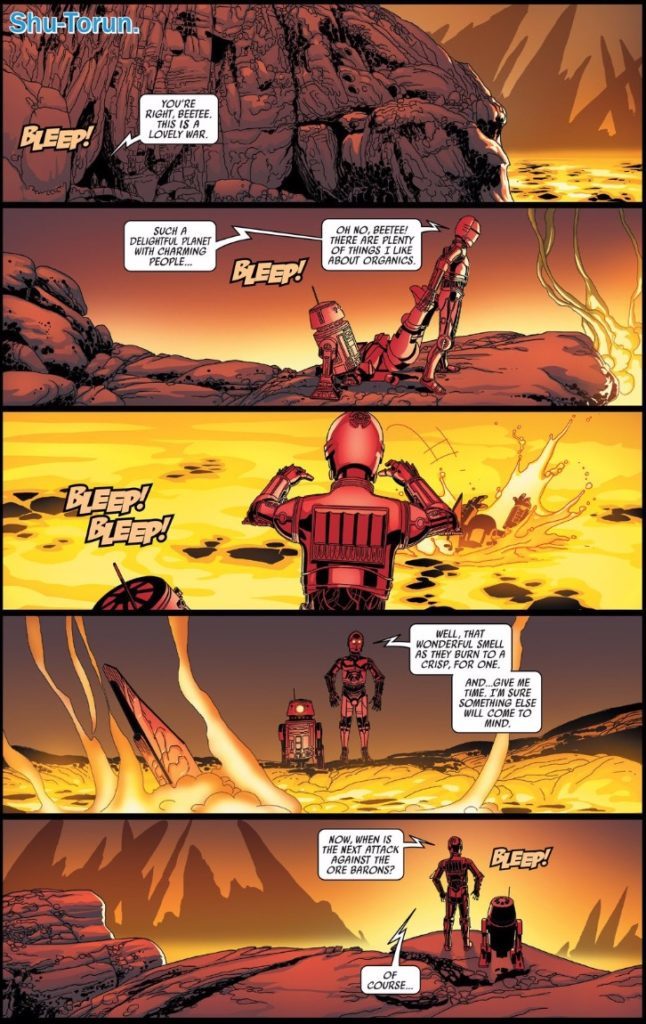 A pair of homicidal inorganics with bloodlust in their circuits and the tools to get the job done. Regularly partnered with Doctor Aphra, this pair is downright evil, just waiting to destroy.

Garbed in the salvaged remains of a shattered Nubian yacht, towering Captain Phasma acts as the gruff, effective commander to the First Order’s legion of stormtroopers. Expressionless and unreadable while behind her helmet, harsh to those who follow her lead -- and harsher still to those who don’t -- Phasma’s tough, no-nonsense demeanor on both bridge and battlefield strikes terror into the heart of her enemies as well as those of her subordinates.

Speaking of First Order leaders with terrifying, expressionless helmets, how can we ignore the malevolent personage of Kylo Ren? Once the son of galactic heroes, Ben Solo was seduced to the dark side and transformed into the First Order’s most dangerous asset in their war against the Resistance. Carrying a cross guarded lightsaber, angrily spitting crimson plasma as he advances on a foe, Kylo himself reflects his weapon in terms of sudden, inexplicable fits of rage. More dangerous than an emotionless warrior whose skill with a lightsaber and strength in the Force make him formidable? One that is emotionally unpredictable. 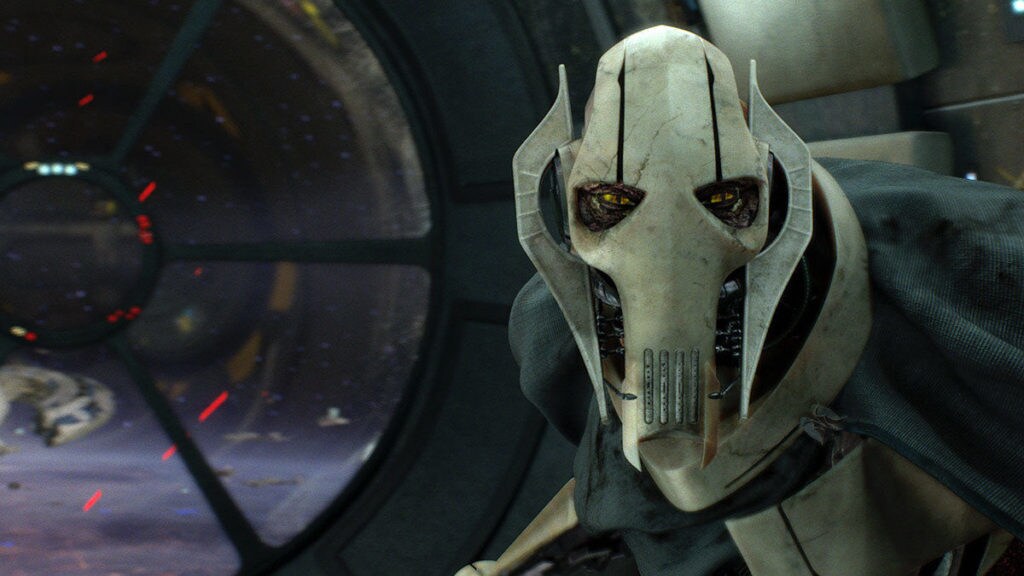 Towering above his mechanical minions, a skull-like mask upon his face with presence akin to a gargantuan arthropod, General Grievous has struck fear into the hearts of his enemies since arriving on the side of the Separatists during the Clone Wars. Not to mention his ever-present quartet of lightsabers, tokens to remember his Jedi victims, secreted under the tattered cape he uses to hide his broken skeletal body. Grievous’s terrifying appearance is only enhanced by the viscous sacs of fluid visible beneath his rib cage and the strident cough hacking from within his torso.

That raspy voice. The flinty yellow eyes glaring from the folds of his cowl. The ravaged face, the clutching fingers and the mocking laughter cold enough to chill any foe’s bones. And that’s before he even lifts a finger. The dread lord Darth Sidious -- also known as the Emperor, formerly known as Sheev Palpatine, Supreme Chancellor of a long-dead Republic -- has been the galaxy’s key proponent of evil, fear, and terror for a long, long time. Not only is he hard to look upon, and his demeanor truly terrible to behold, but Sidious is scary because he’s a being with a plan. And that plan -- like his fashion sense and love of crackling, purple lightning bolts -- scares the Midichlorians out of most sentients with the good sense the Force gave them.

A nightmare in jet-black armor, wielding a blood-red lightsaber, Vader encapsulates fear. Hidden behind a dispassionate helmet, brooking no failure and suffering no fools, the Dark Lord of the Sith has been frightening fans long before they heard of Maul, Sidious, or the capacious appetites of Jabba the Hutt's rancor. More sinister than scary? Bear witness to Vader’s swift, slashing march through darkness and haze, cutting down rebels left and right in the final moments of Rogue One: A Star Wars Story. The mixture of reds and blacks in that scene, juxtaposed against Vader’s oncoming, merciless attack, will send shivers through the bones of any young rebel with thoughts of entertaining a counterattack. Also, the trial Luke faced in a cave brimming with dark-side power, in which he suddenly encountered his greatest foe: a ghostly, ghastly Vader, silently gliding closer, lightsaber ignited and ready for battle. There are dozens more examples -- from Vader’s heart-wrenching reunion-slash-battle with a grown Ahsoka Tano on Malachor to the vicious, calculating snare he set for Luke in Cloud City. There might be good in him, but Vader inspires fear like few others.

It’s a scary galaxy out there. Keep a sharp eye around corners and stay away from Dathomir this month, okay?