Who Is Poe Dameron?

In a special guest post, the writer of Marvel's Star Wars: Poe Dameron series reflects on crafting a new tale for the Resistance's best pilot.

My experience seeing The Force Awakens the first time might have been a little different from yours. When I walked in and sat down, I already knew that not very long after the credits rolled, I’d have to get started writing the first installment of a comic book series about one of its new characters -- a hotshot Resistance pilot named Poe Dameron, played by Oscar Isaac. I knew who Poe was, in terms of the broad strokes of his character and what he would do in the film, thanks to the good people at Lucasfilm who pulled back the curtains ahead of time to some degree -- but I’d never heard him speak. I didn’t know how he moved, or what he thought about the galaxy or his place in it. Did he make jokes, or was he grim and focused? Was he generally a happy guy, or was he weighed down by the weight of his mission? I had absolutely no idea.

It was an odd feeling, especially when I compared it to the work I’d been doing on two other Star Wars-related comics projects. One was about Lando Calrissian, between A New Hope and Empire Strikes Back, and the other was about Obi-Wan and Anakin, set between Episodes I and II. I know a lot about those characters. I’ve been watching their adventures, reading their stories, playing games starring them, just living with them for many years -- in Lando’s case, for decades. So, writing stories about them was almost like writing stories about really good friends.

But Poe… he was new. We weren’t friends. We were just about to be introduced for the first time. What if we didn’t click? What if I couldn’t find his voice? 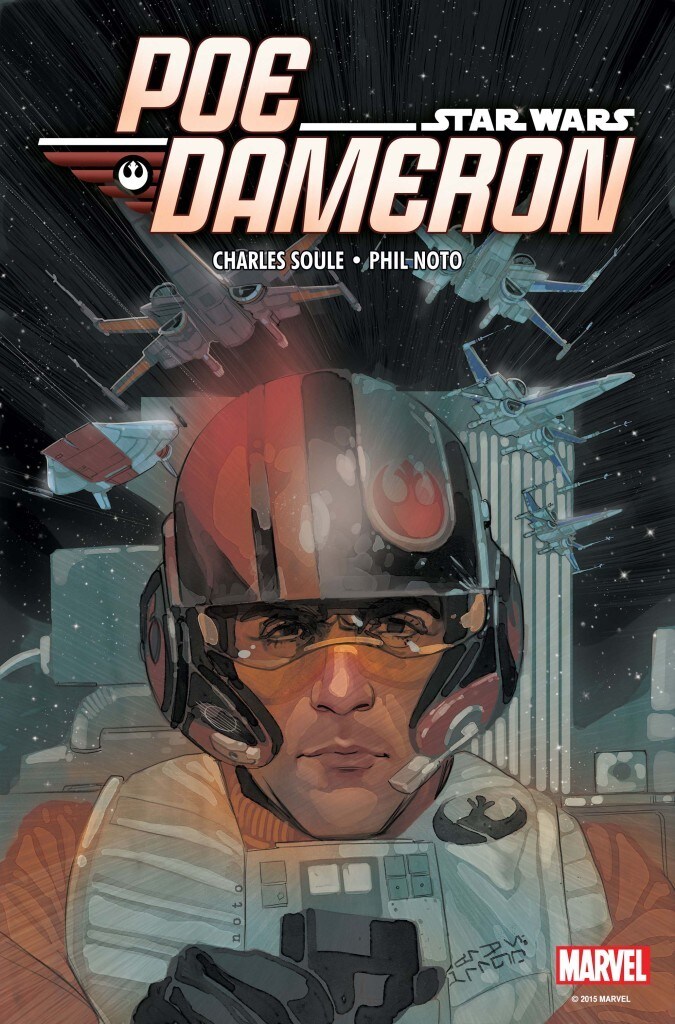 So, while I was obviously pretty thrilled to be seeing Episode VII (and I still get a little rush thinking that I’ve actually seen Episode VII, with VIII and IX on the way, fulfilling little Charles’ recess yard dreams and speculation and arguments), I was really paying attention to Mr. Dameron, with my fingers crossed that I’d be able to do something cool with him.

And so, it was with an enormous sense of relief that I stood up as the credits rolled, knowing that Poe Dameron and I were now best friends. In fact, I sort of feel like Poe is everyone’s best friend, and that’s part of why he’s so fun to watch. All credit to everyone who contributed to that character and performance, from Oscar Isaac to J.J. Abrams and on down the line -- because Poe Dameron is fantastic. Charisma for miles, jumps off the screen, whatever you want to say.

So, I was pretty pleased that I’d be getting to write some further adventures for him, but then the next question popped up -- how in the world would I actually do that? Liking a character in a movie and writing him are not the same thing, not by a long shot. I buckled down, saw the movie another three times -- you know, for research -- and got to work.

Thank goodness I had Phil Noto as my partner on the book, providing beautiful art that just screams Star Wars from top to bottom. Everyone looks as they should, and it all feels right, which is much more challenging than it might seem. I don’t know how I would have done it without Mr. Noto in my corner.

But did it we did. Many outlines and previous drafts perished to bring you this book, but now, at least, you can read Poe Dameron #1, with my name and Phil’s name on the cover, which still seems a bit amazing to me. This issue is just the start of a huge adventure for our best friend Poe, and I hope you’ll stick around for the whole ride. MTFBWY!