For the entire run of Charles Soule’s Poe Dameron comic book series, readers have gotten the chance to experience the wit, bravery, and unselfish nature of the best pilot in the Resistance. We also have been introduced to Black Squadron, a muscular Hutt, and a compelling new villain. With a new storyline coming this May, StarWars.com e-mailed with Soule about what makes Poe Dameron unique, his Black Squadron copilots, and why Agent Terex is the perfect foil for the titular character.

StarWars.com: Ever since fans were introduced to the characters in The Force Awakens, people have been drawn to Poe Dameron. What is it about the character that you find so compelling, and how do you channel that into the Poe Dameron series?

Charles Soule: I won’t lie -- writing a swashbuckling expert pilot with charisma for miles won’t ever be a drag. Poe the character brings an energy to his scenes that’s pretty undeniable, like a feedback loop of fun and focus. Now, I know I’m writing about a fictional character as if he’s a real person, making me just the scribe jotting down his adventures as they happen, but sometimes it feels like that. Poe is sort of a force of nature.

StarWars.com: While Han Solo and Poe Dameron are a type of foil for one another, and both use unconventional methods at times, they are more dissimilar than they are alike. Compare and contrast the two pilots and what makes them tick.

Charles Soule: I’m tempted to do this in terms of Dungeons & Dragons alignments, but I don’t want to mash together too many fictional worlds here, so I’ll stick to Star Wars. Han is just a darker guy in general than Poe. You can rely on him, if he decides you’re worth his time and energy, but that’s not a foregone conclusion. I don’t think you’re ever quite sure where you stand with Han Solo, which is part of what makes him a great character. Poe is a more selfless character, just in general. I don’t see him ever trying to cut and run as long as there’s still someone he might be able to help. That said, Poe’s rampant idealism and self-confidence absolutely gets him into trouble, much the way Han’s sense of self-interest causes problems for him, as well. They’re both pretty awesome, though!

StarWars.com: Let's look at your incredible run on this series so far. The series is initially set before the events of The Force Awakens and has taken Poe on a number of adventures. What stands out to you from your run so far, and what have been some of your biggest challenges as a storyteller?

Charles Soule: I’ve been really happy with the new characters we’ve introduced to the Star Wars universe, especially Poe’s nemesis Agent Terex, former Imperial stormtrooper and sometime officer in the First Order Security Bureau. He’s always a blast to write, almost a negative-image of Poe himself. Suralinda Javos and Oddy Muva are standouts as well, but even fleshing out characters from the films like Snap Wexley and Jess Pava has been fun, too. As far as challenges… I’d say the biggest thing was creating a compelling, strong adventure for Poe and Black Squadron that fit within what’s really a pretty small window in the Star Wars timeline -- directly before The Force Awakens. We knew where the story ends, to a degree, so finding drama in the journey to get there was a tricky proposition. However, as is often the case in writing, solving the challenges was not just a great time, but resulted in a better story. 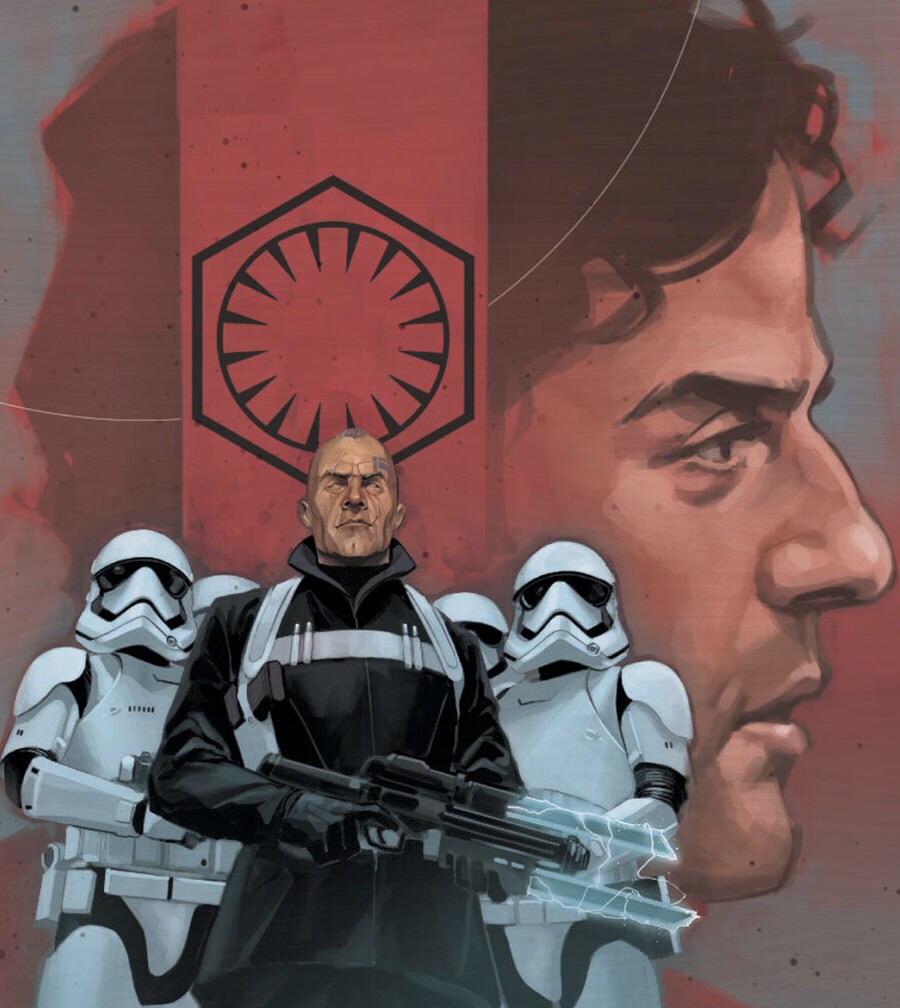 StarWars.com: Agent Terex is not the traditional "bad guy" in a First Order uniform and is much more than an archetypal villain. And, despite Captain Phasma's best efforts, he seems to have an iron will. How much fun is this character to write, and what can you tell us about his character arc?

Charles Soule: Right -- Terex! As I mentioned, he was an Imperial stormtrooper, even present at the Battle of Jakku. He became a galactic crime boss in the intervening decades, a truly ruthless man, but he was always pining away for the lost Empire, which he thought was a pretty cool institution. So, when he heard rumors of this thing called the First Order, he signed up, offering his immense network of contacts and favors owed to them. For a while, that was fine, until he began to tangle with Poe, as they both searched the galaxy for the missing explorer Lor San Tekka, in the hopes he could lead them to Luke Skywalker. Poe can be a frustrating opponent, and we’ve seen all sorts of things happen to Terex on his journey in the series. Personally, though, I think he ends in a really good place, and I’d love to see him pop up elsewhere. We’ll see!

StarWars.com: Through this series, we have also gotten to know the elite pilots of Black Squadron. What makes them such a perfect complement to Poe, and how do they keep one another "grounded," especially considering how gifted they are at what they do?

Charles Soule: Black Squadron has evolved a bit over the course of the series, as any cast of characters should. We began with Poe, Temmin “Snap” Wexley, Jessika Pava, Karé Kun, L’ulo L’ampar, and their loyal(ish) ground tech and aspiring pilot Oddy Muva. We lost both L’ulo and Oddy, as well as more than a few astromechs assigned to Jess, but a new member joined -- the one-time journalist and New Republic Navy veteran Suralinda Javos. Snap and Karé got married at the end of #25, too, which was a storyline I built for a long time in the series. I think they all love each other, and would do anything for each other, but these are fighter pilots. They’re competitive. Still, they usually manage to channel those tendencies into the fight against the First Order, where it should go.

StarWars.com: We also meet Ivee, the incredibly brave astromech (see Poe Dameron #25) that has a rather strong bond with BB-8. What inspired this storyline, and what has the response been like?

Charles Soule: It’s been so fun! Ivee and BB-8 clicked immediately, becoming extremely fast friends, connected in a deep way that organic beings probably can’t completely understand. I thought it might just be fun to give BB-8 sort of a… well, I don’t know if you can call it a romance, exactly, but certainly a very close friendship with another droid. The response has been strongly positive. It’s sort of amazing to me what you can do in comics, and storytelling in general, to imbue a hunk of metal, plastic, and wires with what really feels like “humanity” -- whatever that means in a universe filled with all sorts of non-human sentients.

StarWars.com: You clearly have a talent for finding the voice of so many iconic Star Wars characters, and nowhere is it more apparent than when you write Leia Organa. It's a tribute to your writing prowess that you are able to add to her wonderful legacy. How do you maintain the nuance of this character and keep her so fresh and engaging?

Charles Soule: Leia’s awesome, and really, writing her is not that different from writing any of the characters in any of my Star Wars projects. I just do my best to put myself in their position and let them talk. Leia is a master politician, incredibly empathetic, but also wry and funny. She’s faced with the re-emergence of an evil force she thought she’d defeated decades before, and now she’s doing everything she can to prevent it from taking over the galaxy. She’s under enormous stress, but she handles it with charm and grace. She also takes zero crap from anyone -- that’s a big part of writing her, too. 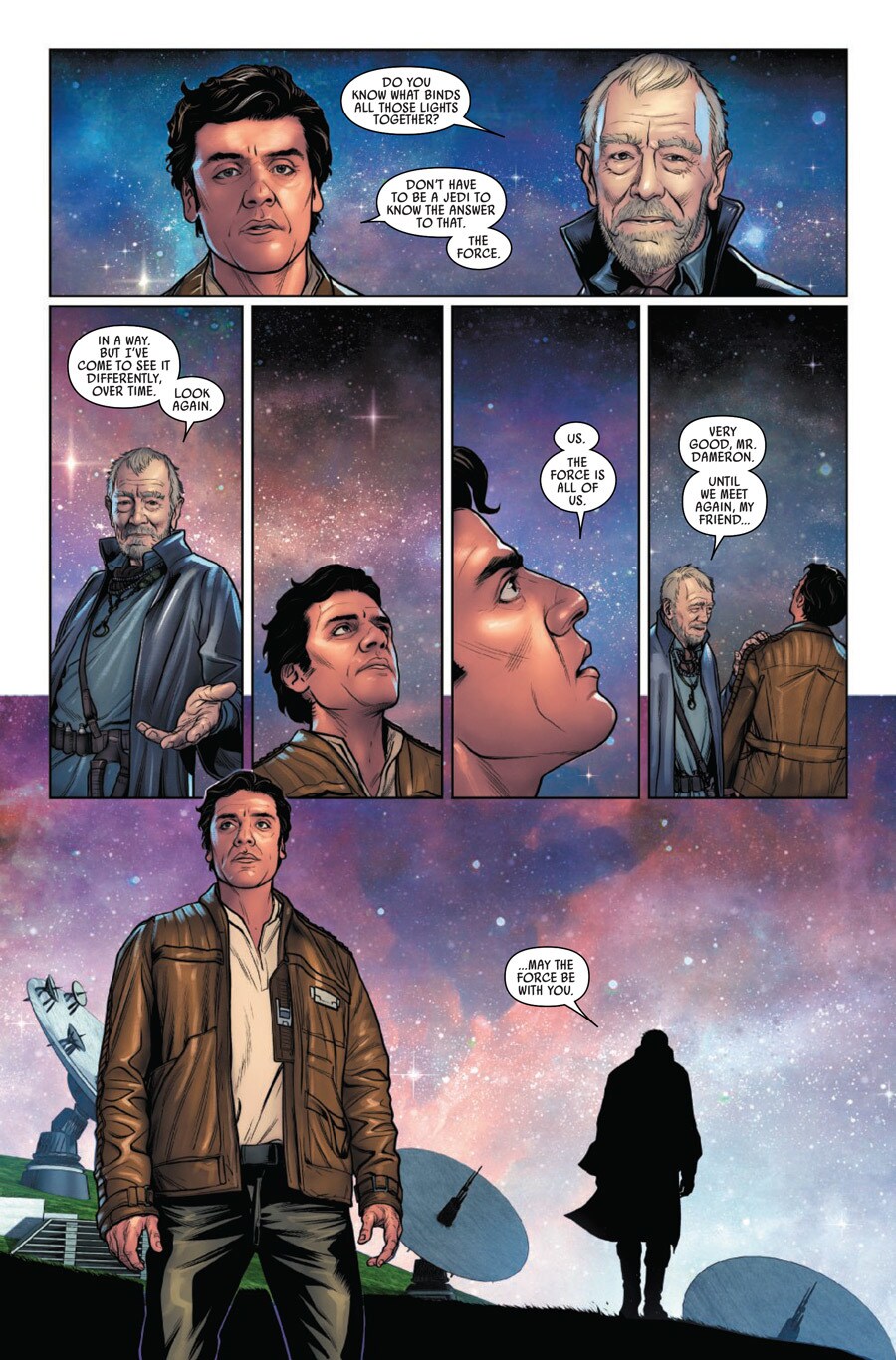 StarWars.com: The "Legend Found" arc features a poignant conversation between Poe and Lor San Tekka in which they discuss the nature of the Force. It's a great way to see the Force from the perspective of non-Jedi characters, but also teaches us a bit more about this mystical energy field. What do we learn from this conversation?

Charles Soule: The biggest thing, I think, is the way a character like Lor San Tekka who’s been studying the Force his whole life views the “hero Force-wielders.” Jedi and Sith, essentially. Lor understands why they get all the attention, as agents of the Cosmic Force, but he knows they’re just a small part of the immense whole that is the Living Force. For Lor, and for the vast majority of beings in the galaxy, it’s all about the Living Force. I hadn’t seen The Last Jedi yet when I wrote that sequence, but now that I have, I think it’s pretty fair to say that Luke Skywalker would probably agree with Lor San Tekka’s point of view, at least in part.

StarWars.com: In May, you have a new arc in store for readers. What can you tell us about it?

Charles Soule: The bookends of Poe Dameron issues 26-31 are set moments after the events of The Last Jedi. I don’t want to suggest that it’s a direct mini-sequel or anything like that; the story is told as a flashback in a conversation following the Battle of Crait. It just gives fans a taste of where things are after the film wraps up. It also takes a look at both The Force Awakens and The Last Jedi from the point of view of characters we didn’t necessarily see in the movies, and will catch us up on what Black Squadron was up to during Episode VIII in particular. I can’t wait for these issues to begin coming out -- they were so much fun to write!


Dan Zehr is a high school English teacher with an MS in Teaching and Learning, and is the host and co-creator of Coffee With Kenobi, a podcast that examines Star Wars’ mythology from a place of intelligence and humor.
Comics star wars comics Marvel Charles Soule Poe Dameron (Star Wars)