Who is Beilert Valance?

Here’s everything need to know about the storied bounty hunter stalking the galaxy in Marvel's Target Vader.

Beilert Valance might be one of the oldest Star Wars characters you’ve never heard of; the bounty hunter has a long legacy that stretches back to 1978. That’s right, years before we met Bossk, IG-88, Dengar, and more for-hire scum in The Empire Strikes Back, there was already a bounty hunter in Marvel’s Star Wars comic books making a name for himself. He returns to the hunt with writer Robbie Thompson and artist Marc Laming’s new story in Target Vader, now available in comic book stores everywhere. 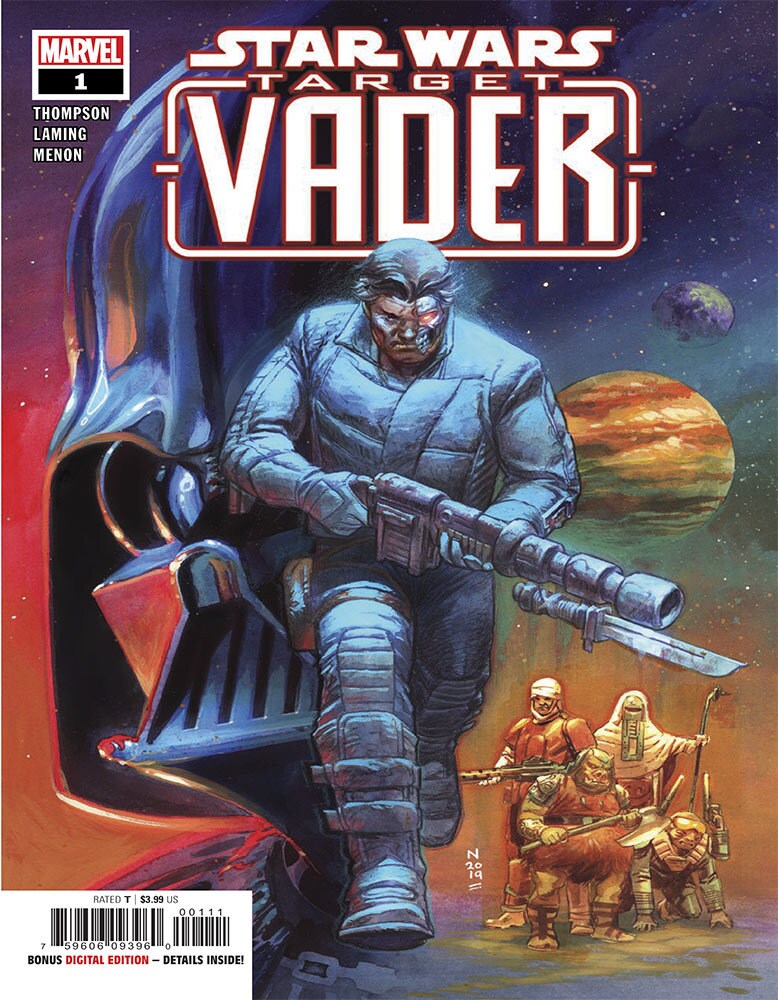 There aren’t a lot of bounty hunters who would take on a Dark Lord of the Sith as a target, but Valance is no ordinary mercenary. Whether you want to catch up on the character’s appearances in the Legends-era comics or you’re intrigued to find out more about the antagonist of Marvel’s Target Vader, it’s time to meet the hunter Beilert Valance. 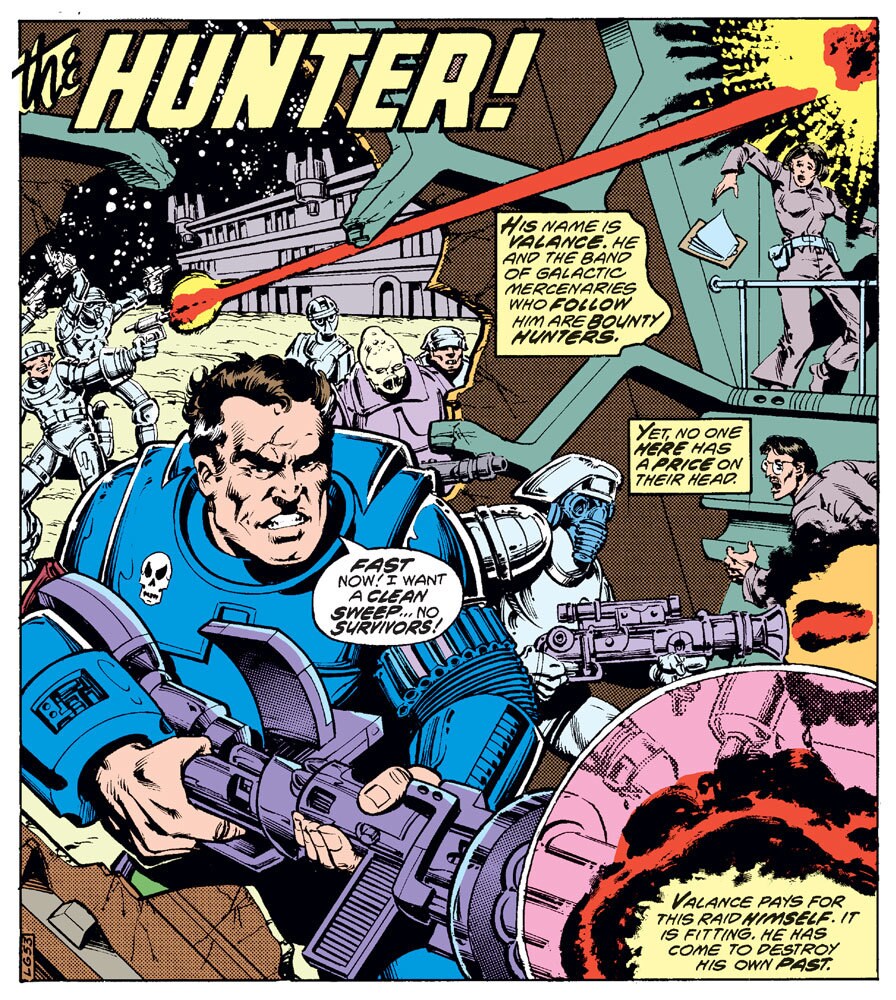 The beginning of a legend

Comics industry luminary Archie Goodwin created Valance with artists Walt Simonson and Bob Wiacek in Star Wars #16. Published in 1978, the book opens with explosive action as “the hunter” isn’t on a mission for any bounty, but instead determined to erase his past. He’s a former Imperial, violent and ruthless -- especially when it comes to droids. While the iconic characters of Star Wars are noticeably absent from this issue, they’re mentioned several times as Jaxxon, the green rabbit-like Lepi, battles the bounty hunter head-on. 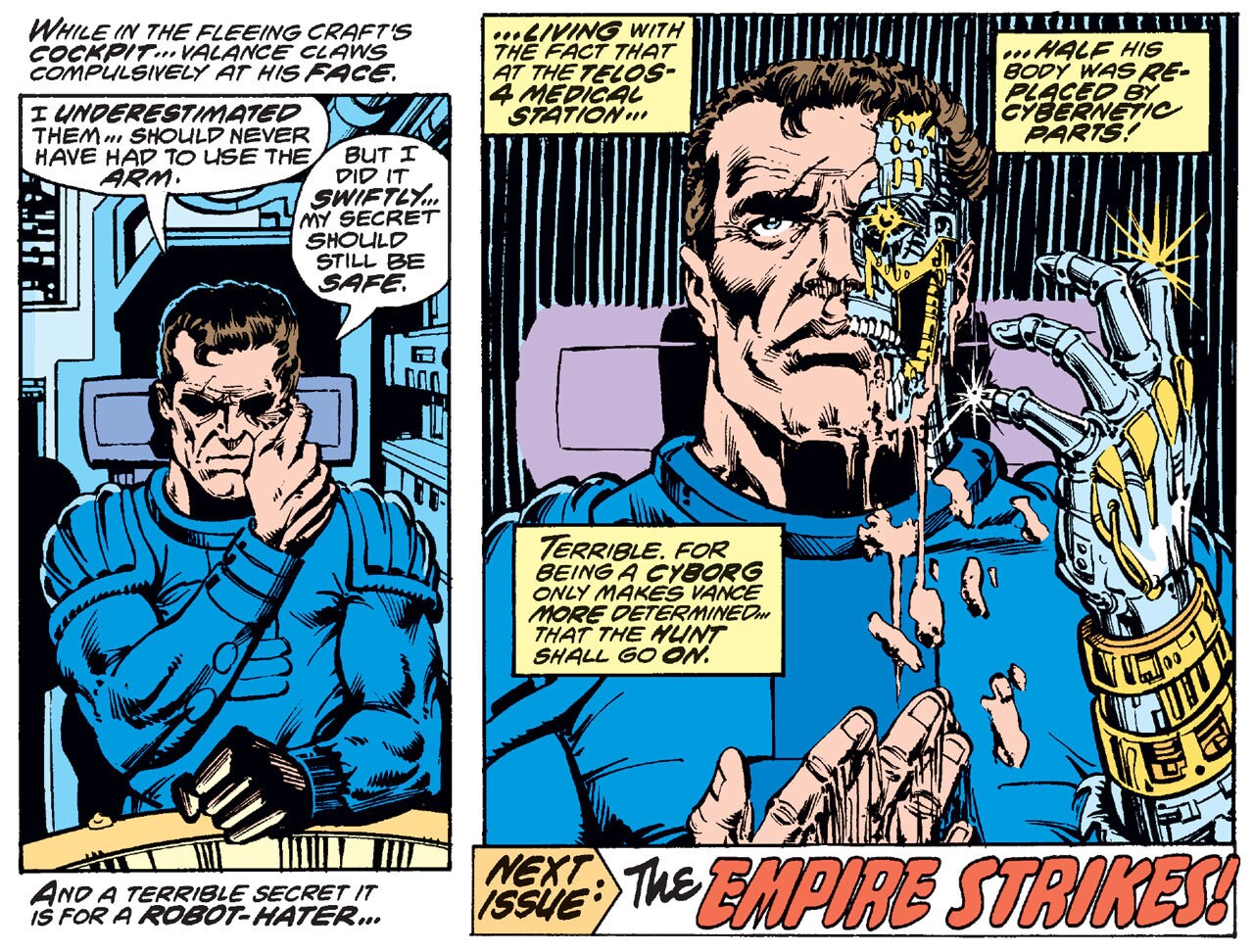 The end of the story reveals the dark irony of Valance’s burning hatred for “mechanicals”: parts of his own body were replaced with cybernetics to keep him alive after a rebel attack, and he abhors what he has become. 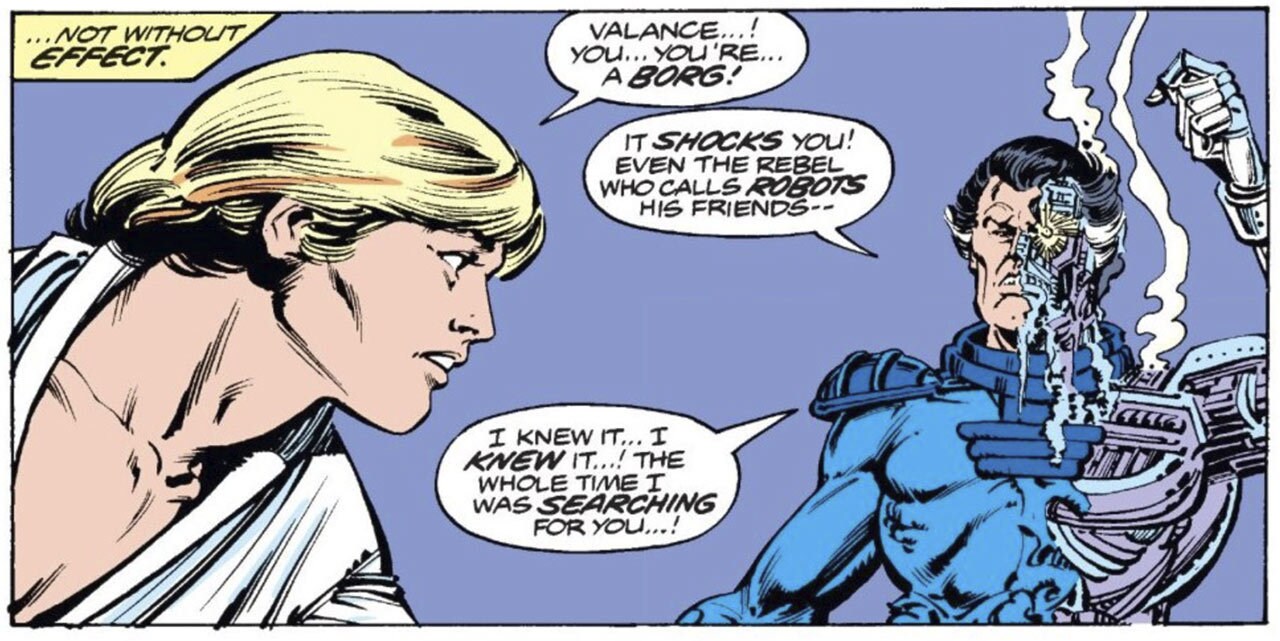 Valance returns to the classic comics in 1979’s Star Wars #27, written by Goodwin and drawn by Carmine Infantino (speaking of legends) and Wiacek. This time Valance has set his sights on the hero of Yavin 4. Disgusted by Luke Skywalker’s affection for R2-D2 and C-3PO, it’s a personal vendetta, not a bounty, that earns the hunter’s ire. But when he tracks down the farm boy and the protocol droid, C-3PO saves the day by convincing Valance to have an unexpected change of heart. 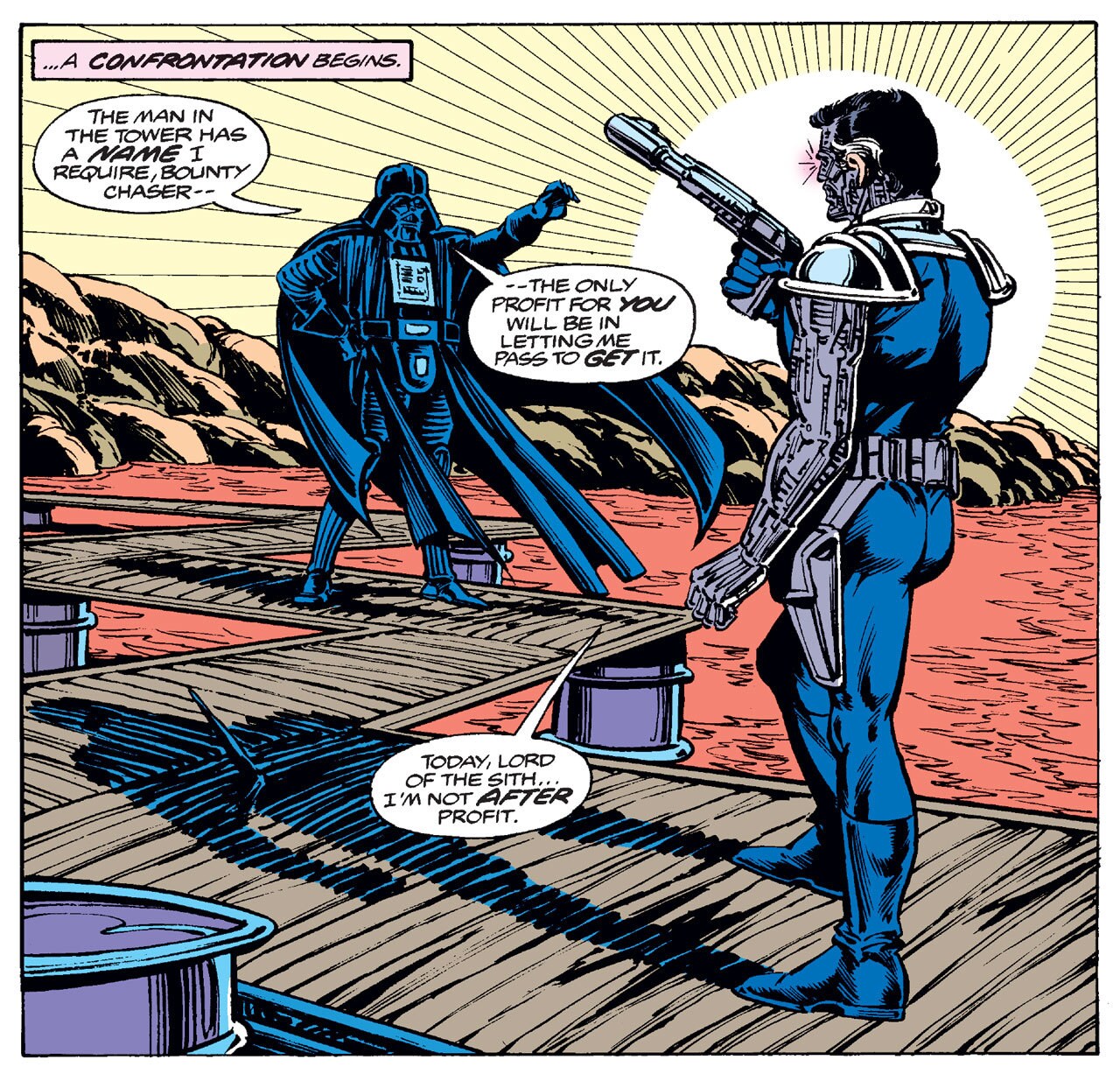 That same creative team brings Valance and Vader together in a clash of wills and weapons in Star Wars #29. They’re both on the hunt for a former rebel who fled in a fit of cowardice when the Death Star arrived at Yavin 4. Darth Vader has learned that the runaway knows the name of the pilot who destroyed the Death Star, a secret that Valance knows as well -- and refuses to let Darth Vader discover. His story ends at Vader’s hands. 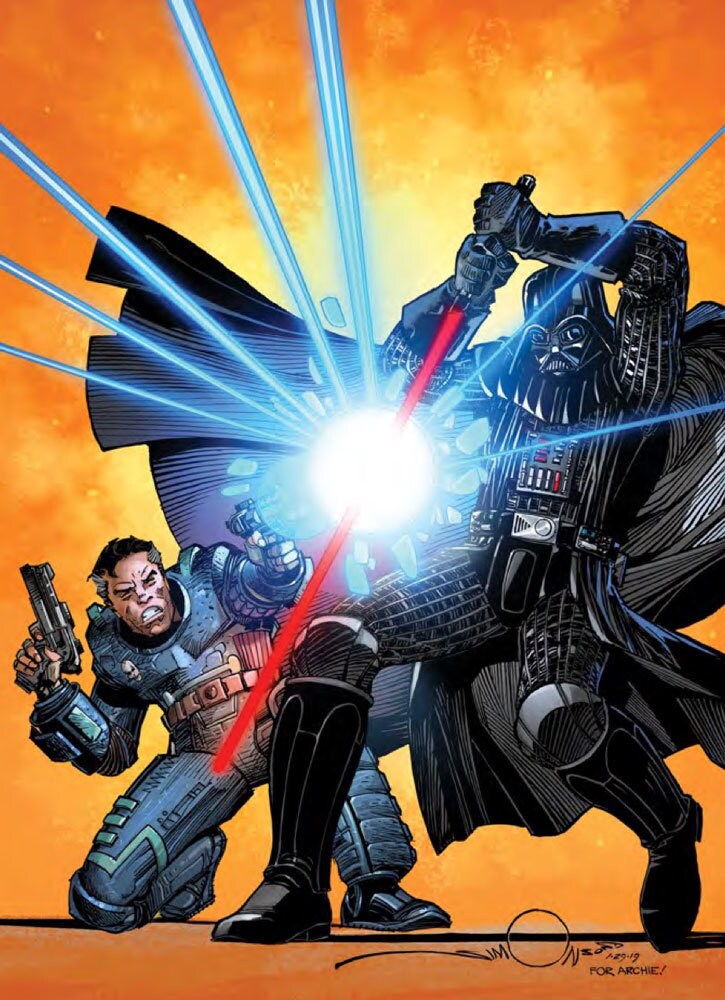 To celebrate Marvel’s 80th anniversary, Star Wars returned to the Legends era for one time only in a special throwback issue. Cover-numbered “#108” (the original Star Wars run ended in 1986 with issue #107), this new tale provides a brief history of Valance the Hunter before diving in to a brand-new story about the relentless bounty hunter. A large creative team tells the final Legends story of Valance the Hunter, who, incredibly, survived his encounter with Darth Vader.

Years later, after the Battle of Endor, Valance’s cyborg body is salvaged and comes back to life. He finds himself onboard a ship that’s in league with Domina Tagge, a villain who once tried to spread a galaxy-wide disease called the Crimson Forever. [Editor’s Note: See 1981’s classic Star Wars #50!] He learns that the source of the disease, two mysterious jewels, could also cure heal his broken body, so Valance sets out to claim them for his own.

Along the way he once again crosses paths with Luke Skywalker, to whom he feels indebted for redeeming some of his humanity. Valance saves Princess Leia, and the entire galaxy, before finally being at peace. 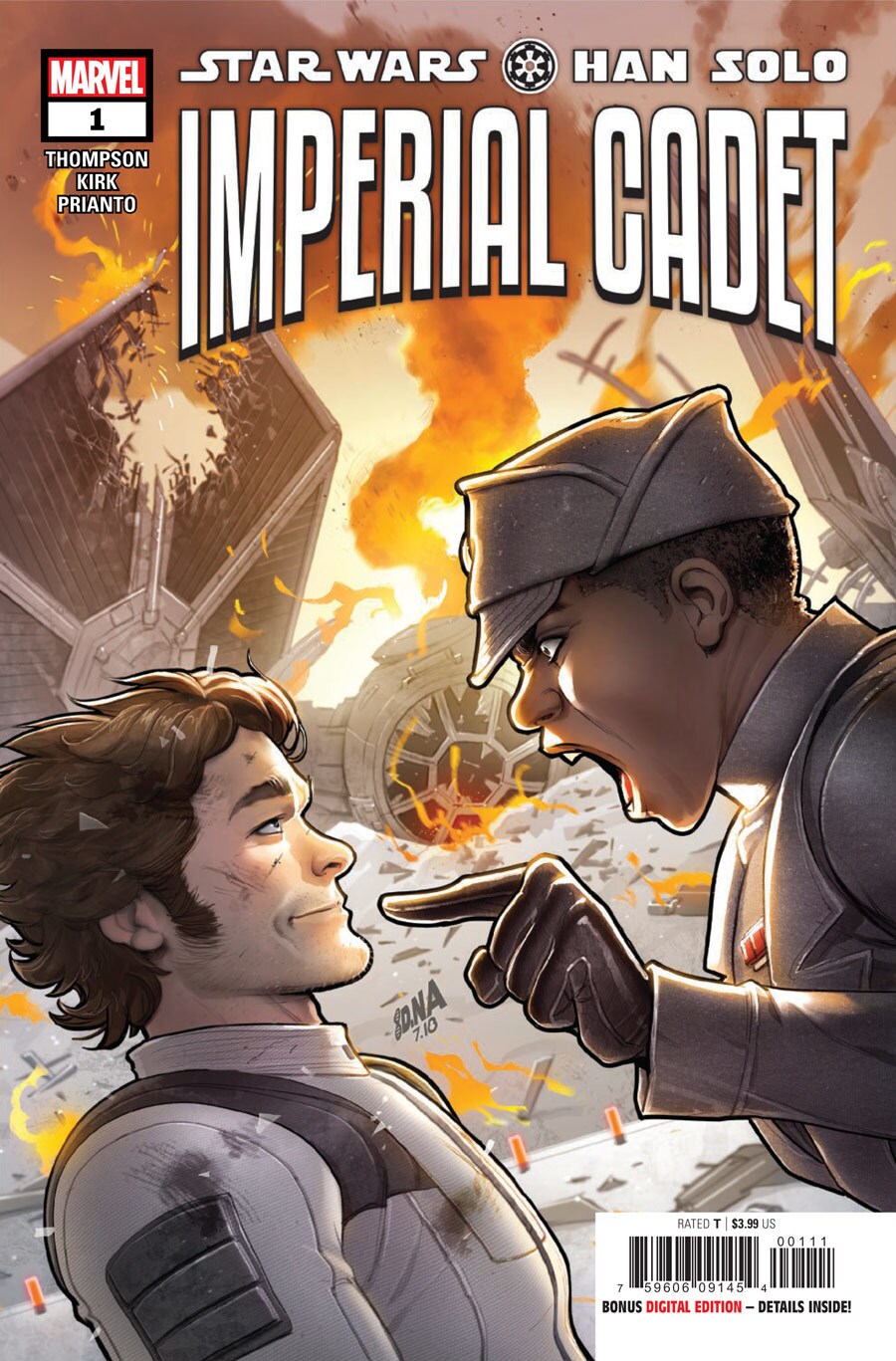 Valance officially joins modern Star Wars continuity with his debut in Han Solo: Imperial Cadet, a miniseries from Robbie Thompson and Leonard Kirk! Beilert Valance is an egotistical, haughty hot-shot pilot -- in other words, the perfect Imperial. He’s part of young Han Solo’s pilot cadet class and the two don’t exactly see eye to eye. But when his life is in danger after his TIE fighter is downed in battle, it’s Solo who breaks the rules to save him.

The attack costs him an eye and a leg, and the Empire refuses to pay for the medical expenses to replace them with cybernetic parts. He’ll never be able to fly for the Imperials again. 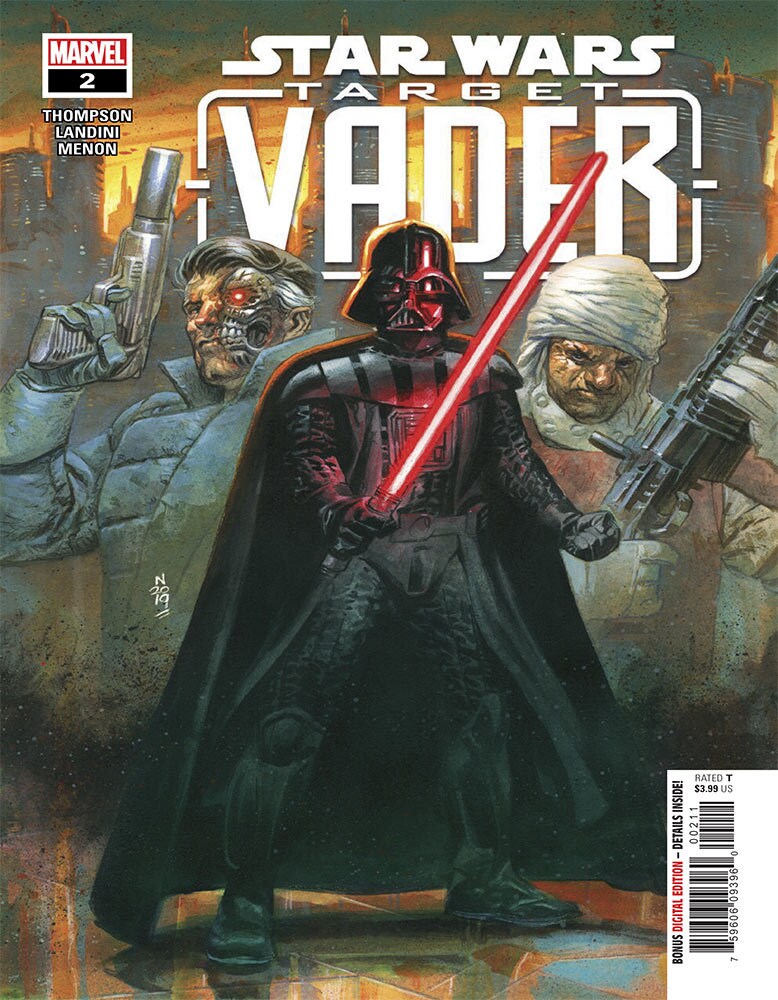 Target Vader, from the creative team of Robbie Thompson and Marc Laming, once again puts Vader in Valance’s crosshairs. It’s been years since his Imperial academy days, and Valance is on the outs with the Bounty Hunter’s Guild. The former Imperial has been recruited by a crime syndicate to take out the Dark Lord of the Sith, and he’s teaming up with Dengar and other unsavory bounty hunters to get the job done.

Will the next meeting between Valance and Vader be just as legendary as their first? Find out at your local comic book store as the Target Vader miniseries continues!

Kelly Knox is a Seattle-area freelance writer who loves creating Star Wars crafts with her daughter. Follow her on Twitter at @kelly_knox.