Learn how the writer of The Star Wars adapted George Lucas' original screenplay into a comic book!

How do we get from a scene in George Lucas' rough draft to a page in The Star Wars comic book? By transcribing its key visual “frames” and its most essential dialogue (feeling, plot, character, not necessarily in that order) to the comic book format. Fortunately, cinema and comic books tell stories visually (usually).

Issue #1, however, was difficult for all: for me, editor Randy Stradley at Dark Horse, and artist Mike Mayhew. Mike had a whole lot to design, from characters and locales, to ships, to props, and so on -- before he could even start on his layouts. For my part I sort of naively jumped into my first professional comic book gig (I guess we can’t count the many I did as a teenager and before), but fortunately Randy took the time to explain some of the finer points (and some of the basics).

The scene being examined is the first appearance of Jedi general Luke Skywalker, pages 14 and 15 in issue #1. As written in the rough draft script, Lucas' establishing shot of the Palace of Lite on Aquilae would’ve taken several panels to show (more or less): one for the long shot of the palace and the kids, another of the kids entering the palace, and a third of the kids running through the hallway. It was simpler to start with the large establishing shot and get right to the crux of the matter: King Kayos’s meeting with his council and the impending war. The kids could come running in at the end of the meeting without being foreshadowed.

To get an idea of the adaptation process, take a look at this sequence in Lucas' original screenplay and my comic book script version.

If you compare the ensuing dialogue of the rough draft with that of the comic book script, you’ll see the order of who said what is transposed a little to get the idea of “war” into readers’ minds at the outset of the scene. The idea of war contrasts nicely with the beautiful setting. And I’d been asked to have dialogue on as many panels as possible (with exceptions here and there), so that readers will take a little bit longer to look, read, and see the artwork, before moving on.
To save a space and speed up the story, Zavos’ second line was deleted and Count Sandage’s speech edited down. (Zavos’ fiddling with the leather scrap had to go -- not ideal for the format -- as did the non-essential aide closing the door.)
When Mike did his layouts, before final pencils, he felt that page 14 could have two panels instead of one, which freed up more room for the all-important intro panel of Luke Skywalker on the next page. While George’s intro of Luke would’ve worked fine in a film, with everyone’s head turning as Skywalker silently enters, we needed a more comic book feel to Luke’s entry and wanted him to assert his authority right away. As George had written that Sandage meekly sits down, that became an order issued by Skywalker, “Count Sandage, sit down.” Amazing, right? 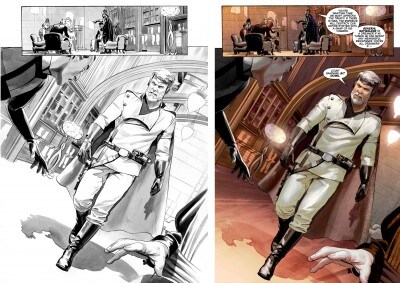 So this sequence was pretty straightforward. Some scenes, even the following dialogue on the next few pages, was trickier. Often long script passages had to be condensed, action reduced to its simplest form -- while some things need to be added to or expanded upon; every scene, each moment was different.

All that said, our aim was and is to create a completely fluid read, full of action, with believable and sympathetic characters -- having the adventure of a lifetime in The Star Wars.

(And thanks to Pablo Hidalgo for suggesting this subject and to Matt Martin for requesting another blog on The Star Wars.)

Look for The Star Wars #1 in comic shops everywhere on September 4!