SWCE 2016: 15 Things We Learned from the Rogue One: A Star Wars Story Panel

All the biggest news and highlights from the Rogue One: A Star Wars Story panel in London!

The filmmakers and cast behind the upcoming Rogue One: A Star Wars Story came together tonight -- in a special panel hosted by Gwendoline Christie -- at Star Wars Celebration Europe 2016. They talked about their characters, their experiences making the movie, and much, much more. Here are 15 of the biggest insights, highlights, and surprises from the panel.

1. Rogue One will look and feel unique from all other films set in a galaxy far, far away. “It’s a style that is unlike any other Star Wars movie,” Lucasfilm president Kathleen Kennedy said. She recounted seeing director Gareth Edwards, camera on his shoulder, testing shots guerilla-style as sign that this movie would be different. “I think that’s what’s so amazing about his style," she said. "This is going to be an incredibly immersive experience when you see Rogue One.”

2. Gareth Edwards was star struck when he met a certain Jedi. “It’s just been the most insane, most surreal experience,” Edwards said. One day, someone nudged him and asked, “Do you want to meet Luke Skywalker?" Mark Hamill was visiting the set and wearing a Godzilla tee shirt; Edwards had directed 2014's Godzilla. “I don’t know what I said to him," Edwards said. But he had one thought: "Please Lord, somebody be taking a photograph of this.” Later, Edwards revealed that one George Lucas also paid a visit, and took a moment to pay tribute to the Star Wars creator. “None of this would be happening if not for George Lucas," he said. "The guy’s a genius.”

3. The concept for the film -- the Rebels' theft of the Death Star plans -- dates back to the once-planned live-action Star Wars TV show, discussed around 13 years ago. The idea came from John Knoll, digital effects innovator at Industrial Light & Magic, who thought a Mission Impossible-style tale would be a good fit for the show. He dropped the idea, however, when he heard the timeline for the series, which wouldn't fit with a pre-A New Hope story. But when Lucasfilm announced the standalone series of movies, Knoll recalled his story. “I was thinking, 'That original idea could make a good standalone film,'" he said. The more people he told the idea, the more he was encouraged to formally pitch it. Finally, he did, and the rest is Star Wars history. Knoll thought, “If I don’t [pitch], I’ll always wonder what might’ve happened if I had.”

4. Prepare to visit the sunny beaches of Scarif -- that's the beach world seen in the teaser. And shooting in such a real-world location was (not) hard for everyone. "Just so happens it was set in paradise," Edwards said. "So we had to go to paradise to film it.” 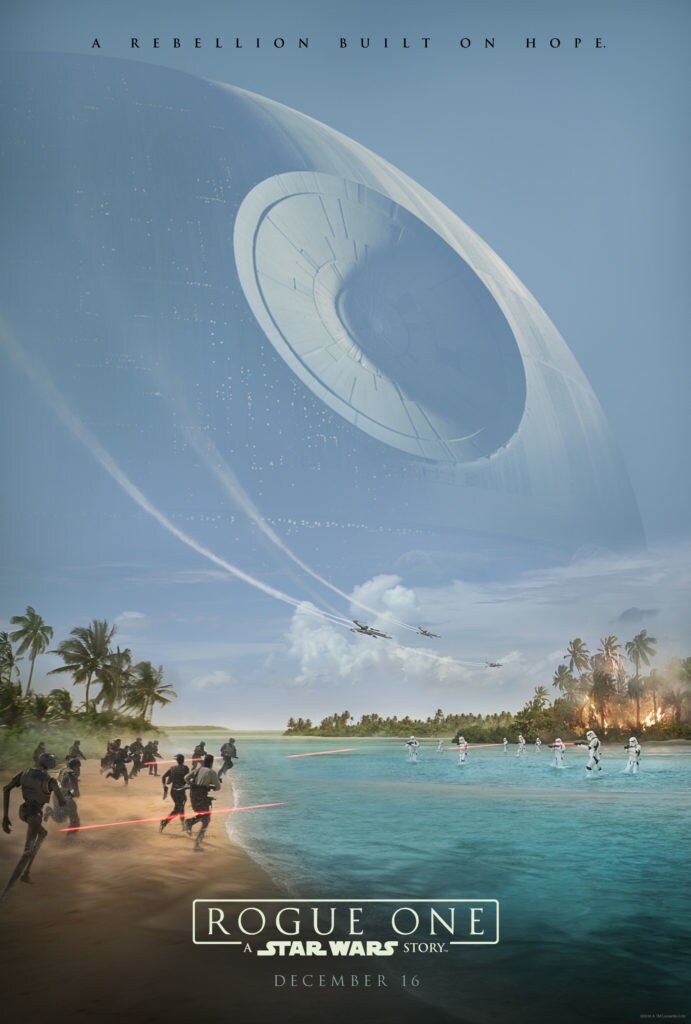 5. New poster revealed! See above. 'Nuff said. (And everyone in attendance received one at the end of the panel!)

6. Director Krennic knows how to make an entrance. Ben Mendelssohn, who plays the film's caped villain, took to the stage in full costume, flanked by death troopers. It was pretty awesome. He would return later, dressed for this galaxy.

7. Jyn Erso is making the leap from the big screen to your toy shelf: Gwendoline Christie revealed the 6-inch Black Series figure of the character, coming from Hasbro. “I feel very privileged to have joined the Star Wars doll universe," said actress Felicity Jones. "She’s got a pretty cool Han Solo-style gun belt." This is also the first Rogue One toy revealed!

8. Felicity Jones sees Jyn as a new kind of Star Wars hero. “I feel there’s one major difference between Jyn and other Star Wars heroes, Rey and Luke. She’s not a character asking, 'Who am I and where did I come from?'” Rather, Jyn knows where she came from and that propels the story and her journey.

9. We now know Cassian's job. The character, played by Diego Luna, is Rebel intelligence. Within the team assembled for the mission, he's somewhat of a peacekeeper, smoothing things out when there's friction. And he also has a rather strange "best friend."

10. K-2SO, the droid voiced by Alan Tudyk, is close to Cassian -- but he also may have a screw loose. Literally and figuratively. The droid was originally an Imperial, and was reprogrammed by Cassian. Yet something didn't quite take.“He’s not quite all there," Tudyk said. "He speaks his mind and says things that could be unsettling. Very honest. If you know any old people, he’s like that.” Which probably made the role all the more fun for the actor. “It was great to play him,” he added.

11. You wouldn't think someone on this squad would wear the Imperial cog on his sleeve. But one does! Bodhi, played Riz Ahmed, sports the Empire's insignia because he serves in the Empire, plan and simple. “Bodhi is a pilot and he works for the Empire to earn a living," Ahmed explained. "You know, people work at big organizations, they don’t agree with everything they do. He’s kind of questioning things.” The city he’s from is an occupied planet, and the Empire's actions there make him "question his career counselor.”

12. There were even more revelations on characters and planets. Jedha is another new world in Rogue One, and home to Chirrut, Donnie Yen's staff-wielding, blind warrior. "I can’t see but I can feel with my heart and believe in the Force,” Yen said.  Chirrut also has a friend -- the gruff Baze. Of Baze, actor Jiang Wen said, "Baze has a gun. He has a huge gun.” Sounds like he and Chirrut will make a good combo. Forest Whitaker, playing Rebel veteran Saw Gerrera, described his character and his rebel faction as being extreme, willing to defeat the Empire by "any means necessary." He added that he's gone back and watched all of Saw's episodes of Star Wars: The Clone Wars, which show his rise as a rebel leader and time fighting alongside Jedi.

13. Star Wars is often a story of family, and that theme will be present in Rogue One. Galen Erso, played by Mads Mikkelsen, is Jyn’s father. Yet he still remains a mystery. “He’s a scientist and he had invented something so beautiful, so fantastic, that it might change the universe,” Mikkelsen said.

14. Darth Vader will sound like Darth Vader: James Earl Jones is once again voicing the Sith Lord. Edwards recounted traveling to New York for the voiceover session with Skywalker Sound's Matthew Wood. When Jones delivered the line, "POWER," Edwards summed up their reactions succinctly. "We looked at each other and had nerdgasms.”


15. There was a special behind-the-scenes reel shown, now released for fans. It's got aliens, explosions, and a few surprises. Watch it above and get ready to rebel.