The Jedi Prepare for a New Mission in Star Wars: The High Republic: Into the Dark - Exclusive Excerpt

These guardians of peace and justice are in for a surprise.

In StarWars.com's exclusive excerpt of Into the Dark, the young adult Star Wars: The High Republic novel by Claudia Gray, Jedi Orla Jareni, Cohmac Vitus, Reath Silas, and Dez Rydan are about to start a new mission. First, however, they must rendezvous with the ship and its crew that will provide transport -- and they're not at all what our heroes expect. Read the preview and listen to a clip from the audiobook edition below, and get ready for the arrival of Into the Dark on February 2. 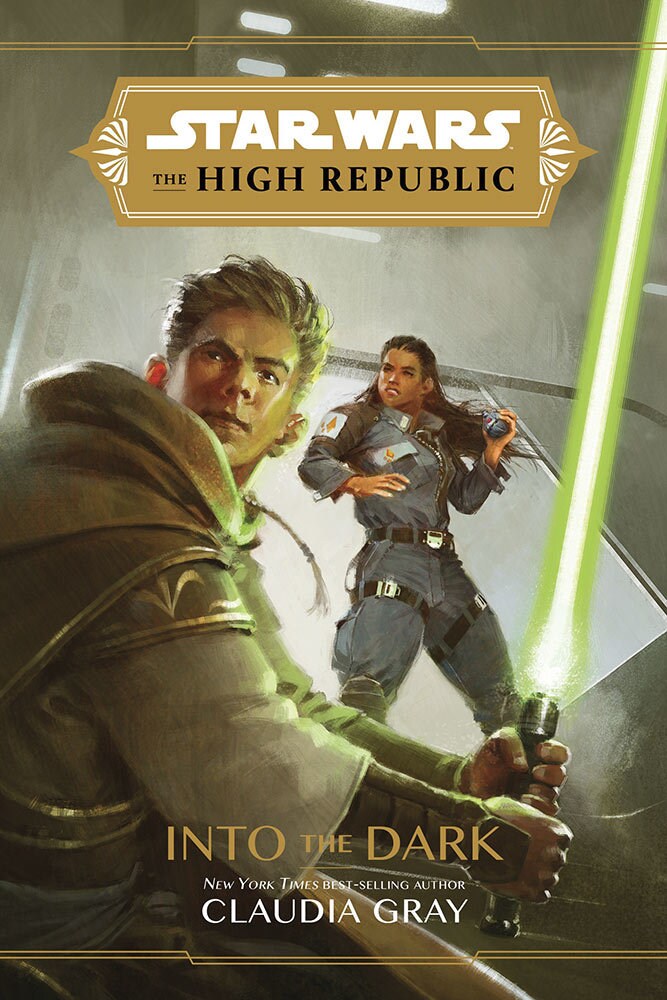 At that moment, Reath’s attention—and everyone else’s—was distracted by a ship flying through the spaceport, rather low, then landing squarely on the pad where their transport ought to have been. It was an unusual ship, at least to Reath: its plating was dark blue, and its cockpit and engines both rounded to the point of being bulbous. Either it had been built a very long time before, or the beings who built it didn’t bother keeping up with technological developments—which was a troubling thought. As it settled onto the pad, the Jedi all exchanged glances.

“Looks more like a transport ship than a passenger craft,” Master Cohmac said.

“Who cares? It can make hyperspace, can’t it?” Dez grinned as displaced air ruffled their hair and robes with a hiss.

No sooner had the ship settled onto the platform with a heavy metallic clunk than the hatch popped open. From it emerged a young girl—possibly Reath’s age, no more than a year or two older, with tan skin. Her long brown hair hung free as she strode toward them wearing a normal pilot’s coverall, an unusually neat, pressed one, in the same distinctive shade of blue as the ship itself. On the sleeve was stitched a star-shaped crest in dark orange. She put her hands on her hips and studied them all as though disappointed. “You’re the passengers for Starlight? I thought we were picking up a bunch of monks or something. You look . . . normal.”

“We are your passengers, and could be called monks of a sort,” said Master Cohmac without any sign of surprise and only a slight pause before asking, “Are you the pilot?”

She grinned and pointed her thumb at the door. “Of course not. I’m the copilot, Affie Hollow. He’s the pilot.”

A teenage copilot seemed questionable to Reath, but when he looked in the direction she was pointing, all those questions vanished, replaced by far more pressing ones. Questions like: Is that man’s shirt open to the waist? Is he holding out his arms to us like he wants a group hug? Does he want a group hug? Is that guy on spice?

No—how much spice is that guy on?

“Beautiful children,” said the pilot, with a laconic drawl and a huge grin. “I’m Leox Gyasi, and I hereby welcome you to the vessel.”

There was a brief pause, which made Reath feel better; even experienced Jedi weren’t totally sure how to approach this guy. Dez finally stepped forward with his usual charm. “Dez Rydan. A pleasure to know you. What’s the name of your ship?”

Leox and Affie shared a glance, clearly in on a joke that was about to be sprung. “Already told ya,” Leox said. He was a tall, tan, and rangy human, and his wavy dark blond hair looked as though it might not have been combed recently. Possibly ever. “Our vessel is called . . . the Vessel. I named it not for the container itself, but the space within the container that gives it its value and purpose. To remind me to look beyond the obvious, you know?”

That sounds like Master Yoda on spice, Reath thought. Which was either a very good sign or a very, very bad one.

“Love it,” Orla said with apparently genuine relish. “So, can we see our bunks?”

Affie made a face. “About that. We’re really more of a transport ship”—Master Cohmac gave Dez a look that seemed to say, Just our luck—“but we’ll set up some partitions and cots for you.” Affie’s narrow face lit up when she smiled. “Just because we’re a last-minute substitution doesn’t mean we can’t make it comfortable.”

Leox cut in: “That is, if you’re not super particular about your personal definition of ‘comfort.’ ”

Orla was the first to head toward the gangway. “We are Jedi, Mr. Gyasi. We don’t require pampering.”

Affie wrinkled her nose. “So, are the Jedi monks or not?”

That stopped Reath short before he realized what this must mean. If they didn’t even really understand what the Jedi were . . . “You guys have to be from out on the frontier, huh?”

“To us, it’s not a frontier, son.” Leox led them all after Orla into the Vessel. “It’s home. But if you mean we’re not used to this stretch of the galaxy, that’s the truth. Never been this close to the Core before, not by a long shot.”

“The Byne Guild handles shipping throughout the sector.” Affie sounded proud. “We’re just one of the Byne Guild’s ships—one of the smaller ones, honestly—but Scover Byne still gave us the first-ever mission to Coruscant.”

Reath, embarrassed by his tactlessness about “the frontier,” was eager to move the conversation forward. He felt sure that this was his opening to ask more about Leox and Affie, their ship, and why they’d earned this particular honor. He also found himself eager to explain the Jedi Order to people who somehow had never heard of it.

But all conversation came to an end as Leox and Affie stopped their group at the edge of the cockpit. “And this here,” Leox said with a grin, “is our ship’s navigator, Geode.”

Standing in one corner of the cockpit was a rock.

About as tall as and slightly wider than Reath himself, dark gray, with rounded edges and a flinty, flaky surface. Impressive, as rocks went. But still, it was just a rock, wasn’t it? Reath frowned, sure this was some kind of weird joke.

“He’s a Vintian, from Vint.” Leox lazily wrapped an arm around the rock’s “shoulders,” just like anyone would with a friend. “Geode’s a nickname, by the way. Turns out you can’t pronounce his name correctly unless you don’t have a mouth.”

Reath tried to parse that, and failed. His main consolation was that Dez and Master Cohmac looked as confused as he felt. Orla Jareni, however, wore another of her knowing grins.

Affie briefly patted Geode’s side. “He’s a little shy at first, but just wait until he gets to know you.”

Leox cackled as he began leading them from the cockpit into the ship. “Yeah, you just wait. But I don’t want to give you fellas the wrong idea. Geode’s a wild man, for sure, but when it comes to steering the ship, he’s all business.”

“Solid, you might say.” Orla raised an eyebrow. “Very well. Let’s get a look at our bunks.”

“Well, we sort of have to create your bunks before you can see them,” Affie admitted. “Might as well get started.”

Great, Reath thought as he turned to follow the others. Not only am I headed to the back end of the galaxy, but the job of getting us through hyperspace belongs to a rock.

Sometimes the Force had a sense of humor.

Star Wars: The High Republic: Into the Dark arrives February 2 and is available for pre-order now.

Claudia Gray Star Wars: The High Republic Into the Dark