Did you hear? They’re going to do a digital model of Bea Arthur from the 1978 Star Wars Holiday Special and make her a bartender in Episode VII!

Did you know? The next Star Wars trilogy was actually fully plotted out in 1966 before George Lucas even graduated from the University of Southern California!

Do you believe it? In Episode IX, Princess Leia and Han Solo finally get married after previous multiple marriages to other beings, and the combined families of 27 children and 36 grandchildren live with them in a crowded tree house on Endor!

Ahem. What do Star Wars fans like to do almost more than anything else? Speculate about things they do not know, of course. It’s a fun pastime, any number can play, and it doesn’t matter how absurd the postings are since someone out there will likely believe them. Even now I get a worried chill that somebody is going to repost one or all of my three absurdities as gospel despite their ridiculousness.

In a way, speculation can be seen as another aspect of the passion that Star Wars fans have for this multi-generational saga, a space opera of good versus evil. Star Wars fans hate a void; open the airlock of their imaginations, and rumors and fanciful ideas whoosh in. And thus it has been since 1977 when, at the end of the first movie, Darth Vader’s TIE Fighter was last seen spinning out of control going…somewhere.

Rumors spread slower back in the day. Yes, younglings, there was a time before there was Facebook, Twitter, blogs, fan sites, and message boards. We did have a couple of magazine stories, a paperback version of the novelization, and the first three issues of the Marvel comic adaptation before May 25, 1977. But despite 500,000 copies of the novel sold by early that year and multiple Marvel reprints, with no Internet, cable television, or much general media interest in entertainment news, there was practically no advance buzz about the movie. 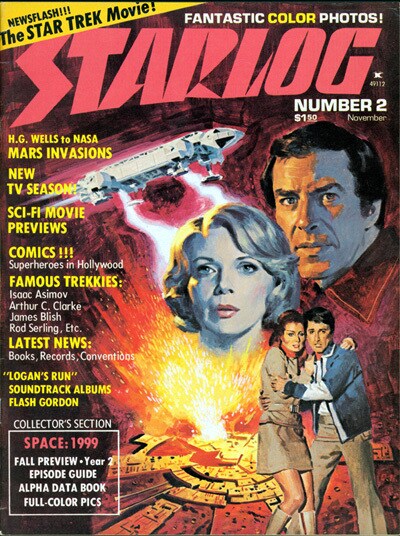 In a great Huffington Post piece, senior writer Mike Ryan went through two-and-a-half years of Starlog magazine in its heyday and made note of the following, among many other delicious genre movie rumors:


In the long down period between Return of the Jedi and the official confirmation of the prequels, I was bombarded with phone calls in the early 1990s from people who insisted that they knew that George Lucas was making a new Star Wars movie “right now!” As the months rolled on, the rumors became more specific, with where the film was being shot, how the production was being hidden, and eventually the biggest wish-fulfillment rumor of all: The movie was finished and it was going to open around the U.S. under a cover name so that people would be shocked but thrilled that they had paid their $4 to see the new Star Wars movie! None of it made sense, of course, and I was a skeptical newspaper reporter -- but I so wanted it all to be true!

Many of you will recall being flooded with near-daily prequel rumors, from alleged plot details to which actor might be cast for the central role of Anakin Skywalker as a young man. Of course, there were some wild stories that turned out to be true, such as Michael Jackson seeking a role in the prequels and most of the ’N Sync guys almost making it onto the screen as Jedi extras in Episode II.

How much speculation is there already about Episode VII? How many atoms in a grain of sand? (Try 78 followed by 16 zeroes.) Actually, a Google search shows only about 4.5 million references online, but that result took a little less than two seconds, so it could be a bit off. There are very few people who know anything about the next movie -- and I’m not one of them, so don’t bother to ask.

Actually, Star Wars movies have always managed to hold surprises. Darth Vader is Luke’s father? Luke and Leia are twins? Anakin and his mother are slaves? Boba Fett’s dad is the source of millions of clones -- including Boba himself? Palpatine is really an evil Sith Lord? OK, scratch that one -- but even after Episode I there were some fans who insisted that Darth Sidious and Senator/Chancellor Palpatine were separate characters. I can forgive that. Frankly, I was one of the few who, after watching The Empire Strikes Back, thought Vader was lying. Let the speculation continue!