Secrets Revealed at Special Fan Screening of The Clone Wars 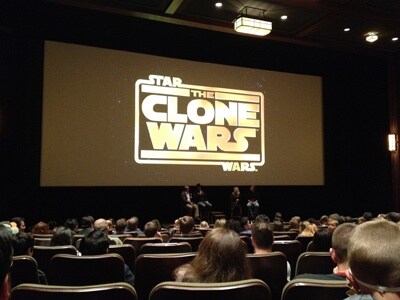 Obi-Wan Kenobi once said, “In my experience, there’s no such thing as luck.” Maybe he was wrong. The Clone Wars Season Five doesn't begin until this Saturday, but some select fans have already seen the first two episodes—on the big screen—and had the opportunity to ask the show's creators questions about the series' past, present, and future. Sounds pretty lucky.

On Friday, September 21, a small group of Star Wars fans were invited to Lucasfilm's Premier Theater and treated to a special screening of the first two episodes of the upcoming season of The Clone Wars, "Revival" and "A War on Two Fronts." A post-screening Q&A moderated by Lucasfilm's Pablo Hidalgo followed, featuring supervising director Dave Filoni, producer Cary Silver, and actress Ashley Eckstein, who portrays Padawan Ahsoka Tano on the show; the talk covered everything from stories about the show's production to the themes of Star Wars, but the group first discussed what it was like seeing the episodes in a theater with fans.

"This is how you should be watching The Clone Wars—on the big screen," Eckstein said to great applause. Recounting how she first watched "A War on Two Fronts," Eckstein said she saw a preview copy on her laptop at home, which didn't compare to the just-held big screen viewing. "It is amazing to watch it with everyone...I loved everyone's reactions."

For Silver, seeing the episodes in this setting brought about a different feeling. "One of the things that kept striking me," Silver said, "is how far we've grown from this point. Obviously, gorgeous stuff is going on [in "Revival" and "A War on Two Fronts"]. But with the things we're working on now, the animation has even gotten that much better. The acting, the emotion, the expressions. That's really the joy for me...Though this is incredible, we've got things coming up that we think are even better."

Filoni noted how some characters seemed to resonate with the audience. "When I see how much you guys like certain characters, it does inspire us [to feature them in future episodes]...then it's just a matter of figuring out, okay, we want to do that, but is there a story worth telling? And that's the hardest thing about this." But it does seem as if some fan favorite characters will be returning. Discussion then turned to the making of the show.

Asked why he was credited as episodic director for "A War on Two Fronts," Filoni—who is the driving force behind the series, but only directs select episodes—was honest. "I get to direct the episodes I want to," he said. "That's the best part. If I see a script and I like it, I say, 'I'm directing this one.'" But Filoni also said that he directs "to test the pipeline to see how the procedure is going, to see if there's any way we can improve the way we do things...I like to get in there and look under the hood." A great deal of the night was then spent addressing characters on the show—who they are and where they might be going.

In discussing Ahsoka's journey so far and what's to come, Filoni talked about her development and teased what she'll be facing this season. "Jedi, by their nature, by their studies, are such disciplined people," he said. "So that's what we see a lot and we tend to put them in that box. But at heart, [Ahsoka] is a teenager. And at a certain point, she is going to be challenged by the things that everyone in life is challenged with." A fan asked if the show would address the fact that the Jedi code forbids relationships, and thus Ahsoka cannot have one. "She can't have an attachment. That's a difference," Filoni responded. "You can't be so bound to the person...Ahsoka's at the very beginning of understanding the dogmatic views of the Jedi. She has to apply it, and she has to figure that out: Can she have a relationship? She can have a relationship, but what kind of a relationship, I think, is the bigger question for her...It does beg the question: What if she knew about Anakin's relationship, and what would she think about that?"

Asked what her favorite episodes of the show featuring Ahsoka have been thus far, Eckstein said, "I love the Mortis trilogy and I loved going to the dark side. I liked going to the dark side just a minute and then coming back, because I think Ahsoka is good through-and-through." Filoni agreed, and addressed how well Eckstein developed Ahsoka and handled early criticism of the character, building her into the fan favorite she is today.

"I knew when we started this, the fans would be pretty much against [Ahsoka]," he said, "because she was being brought into the big pantheon of characters with Obi-Wan and Anakin. She was very young, she said 'Artooy,' she said 'Skyguy.' I think what [Eckstein is] as a person is in the character, and in the end, I think that's why people like her so much."

But there were some challenges from the audience as well, including one fan wanting to know how a certain Sith Lord could survive being cut in half at the climax of The Phantom Menace, only to return as one of the central villains of The Clone Wars.

"What you have to understand about the Sith, ultimately," Filoni said, "[is] they thrive on hatred, they thrive on fear, they thrive on anger. They don't see an existence in life beyond death. There is nothing for them [after death]. Their power is bound to the physical; they live in the now. They think if they die, that's it, they're over, and they're right, because they've given everything to evil. They're not selfless. If you're selfless, and you lead a good life, then you can go beyond and become apart of the Force...Ultimately, Darth Maul, by holding onto his anger, he tortures himself into something unnatural—and that's what Palpatine talks about to Anakin in Revenge of the Sith. So it's an unnatural thing for him to have kept himself alive, and he's a twisted thing and he's a tortured thing." Filoni went further, showing the connections Maul's survival has with the overall themes of the Star Wars saga. "That's the difference between good and evil. It's selfishness versus selflessness. Hold onto that, and pretty much everything in Star Wars makes sense. Luke can't kill Darth Vader; he has to be selfless and love his father, above all things, and throw away his weapon. If he does that, then and only then, will he defeat the Emperor. If he tries to kill the Emperor, then he's just the Emperor himself."

Ultimately, Filoni sees the return of Maul as one of the hallmarks of The Clone Wars and Star Wars in general, as it was George Lucas himself who made the decision to bring the Sith Lord back. "George has a great sensibility for where we need to go with the story, and he's always challenging us to do new things," he said. "And that's something that I think is good to challenge you guys with, anytime [we] tell a story: try to do new things and things that haven't been done. And frankly, a guy that's been cut in half, thrown down an exhaust port shaft...never seen [someone killed that way] come back to life before. So we did it."

Considering it was Obi-Wan who had cut Darth Maul in half, it's understandable why he might not believe in luck. But the fans in attendance at the Premier Theater still might disagree.