Secrets of the Solo: A Star Wars Story Creature Shop

Solo: A Star Wars Story wasn't just a return to the dusty Western, gunslinging roots of Star Wars. It was also a creature feature, filled with strange aliens and terrifying monsters, many of which were brought to life the old fashioned way: with puppetry and costumes -- incredible puppetry and costumes, at that. Under the leadership of Neal Scanlan, the Solo creature shop made some of the most detailed, lifelike, and impressive other-worldly beings yet seen in a Star Wars film. There's the Corellian hounds, or dogs-turned-nightmare fuel; Lady Proxima, the towering worm-thing with a taste for jewelry; and of course, some intimidating sabacc players from around the galaxy. Marking today's release of Solo on Digital and Movies Anywhere (and its upcoming September 25 release on 4K Ultra HD, Blu-ray, DVD, and On-Demand), StarWars.com spoke with puppeteer Brian Herring -- a creature shop veteran of every modern Star Wars film, who's performed BB-8, porgs, and thala-sirens -- to uncover some of their behind-the-scenes secrets. 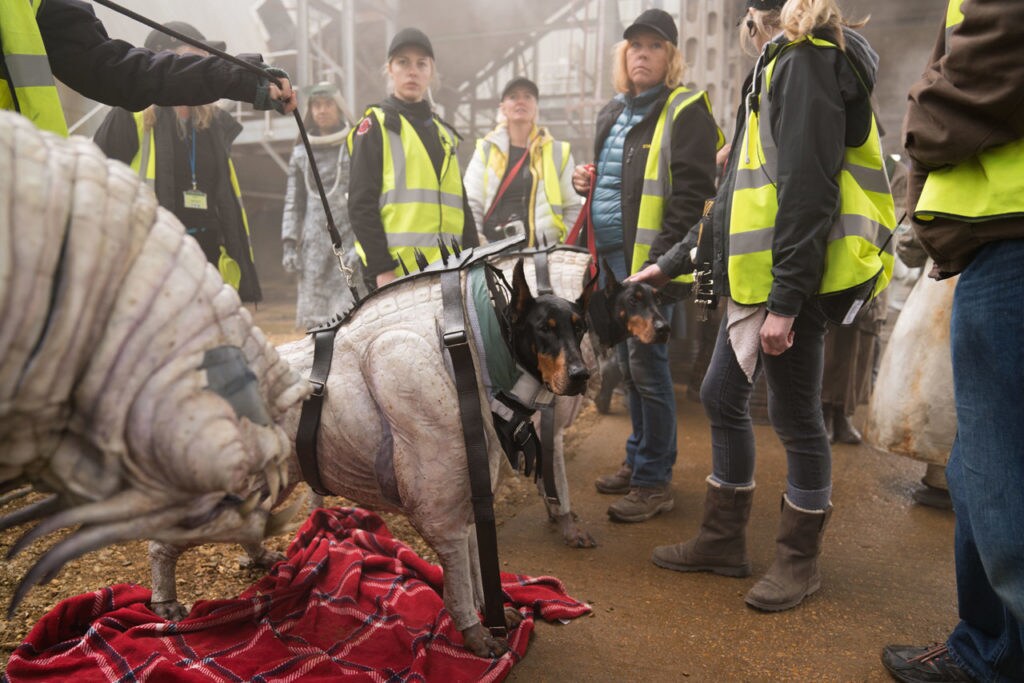 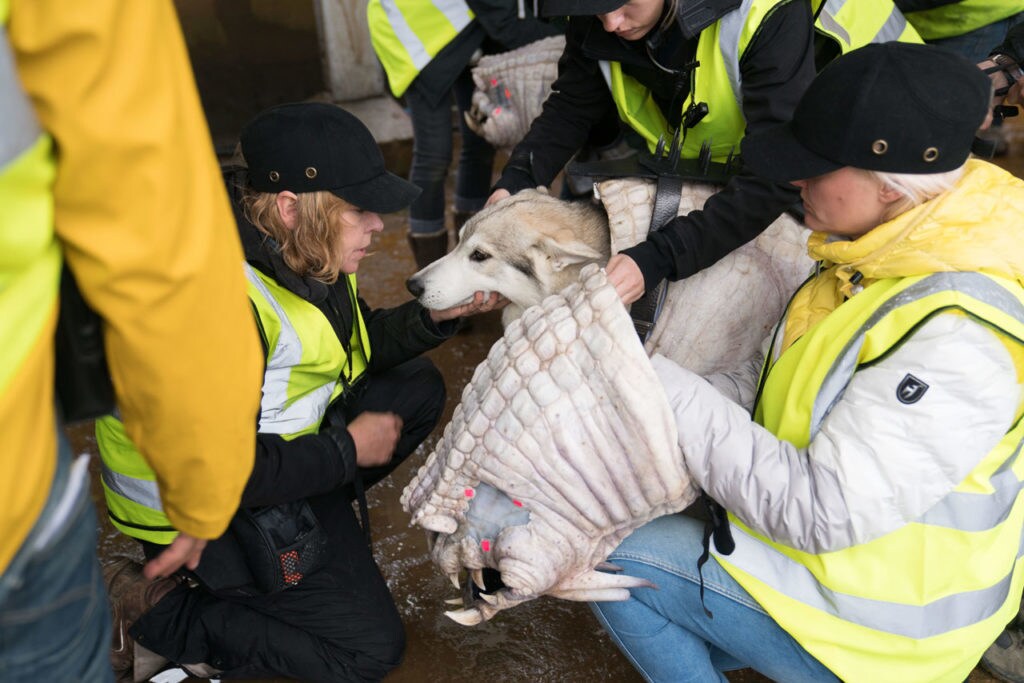 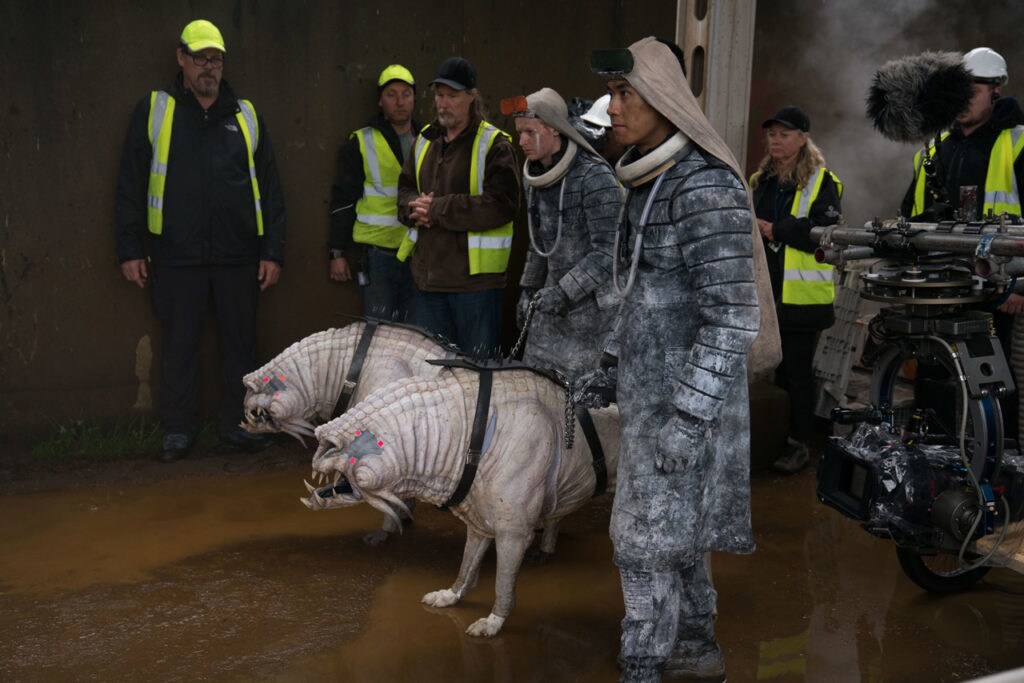 "The Corellian hounds were played by real dogs: two Dobermans named Blackie and Boyce and two Northern Inuits called Saxon and Elsa. They wore specially-fabricated net suits with muscle structures under foam latex. These costumes were fabricated in exactly the same way as that of a human performer, and the process of developing these creatures took over six months. Great care and attention was taken to develop a suit that would be comfortable for the animals to wear and give them the freedom of movement needed to perform in. They had a wide field of vision and ample breathing room. You can tell how much they enjoyed their role by how fast they take off when Moloch sends them after Han and Qi’ra! They were quite a sight at full speed. ILM did digital work on their faces. These dogs are no strangers to the spotlight. Blackie has appeared in Hugo and Saxon and Elsa have played Dire Wolves in Game of Thrones.

"We had puppet versions for several sequences. Some were automated for the high-speed shots in Moloch’s speeder and there were also rod puppet versions, which for several set-ups required Colin Purves -- he provided Nien Nunb’s facial performance in The Last Jedi -- and myself to be crammed into the cargo hold of the vehicle!" 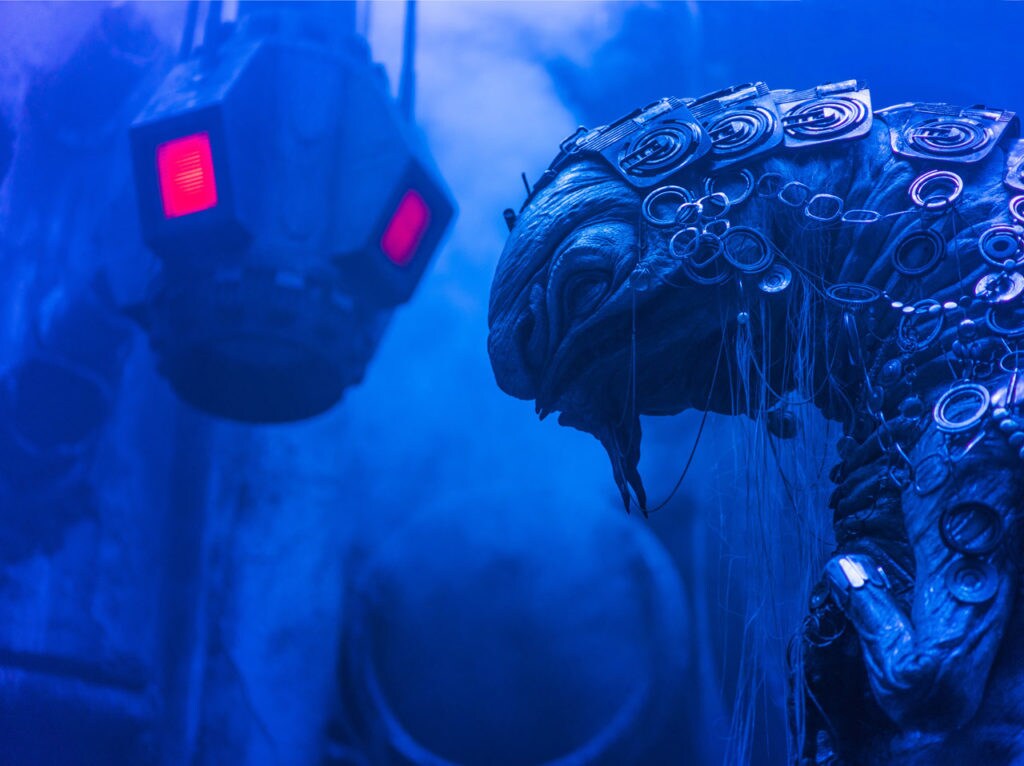 "Lady Proxima was yet another practical puppet. Nine performers worked in or around the 20-foot-deep water tank, providing arm and body movement to the 20-foot-long serpent. The puppeteers performing the arms often had to tread water as the giant creature moved around her pool -- I got a dunking a couple of times. Dave Chapman was the principal performer for Proxima, puppeteering the animatronic face and giving her vocal performance on set. Dave also portrayed Rio Durant in disguise on Mimban and gave on-set vocal guidance for the acrobat Katy Kartwheel and the cast to respond to." 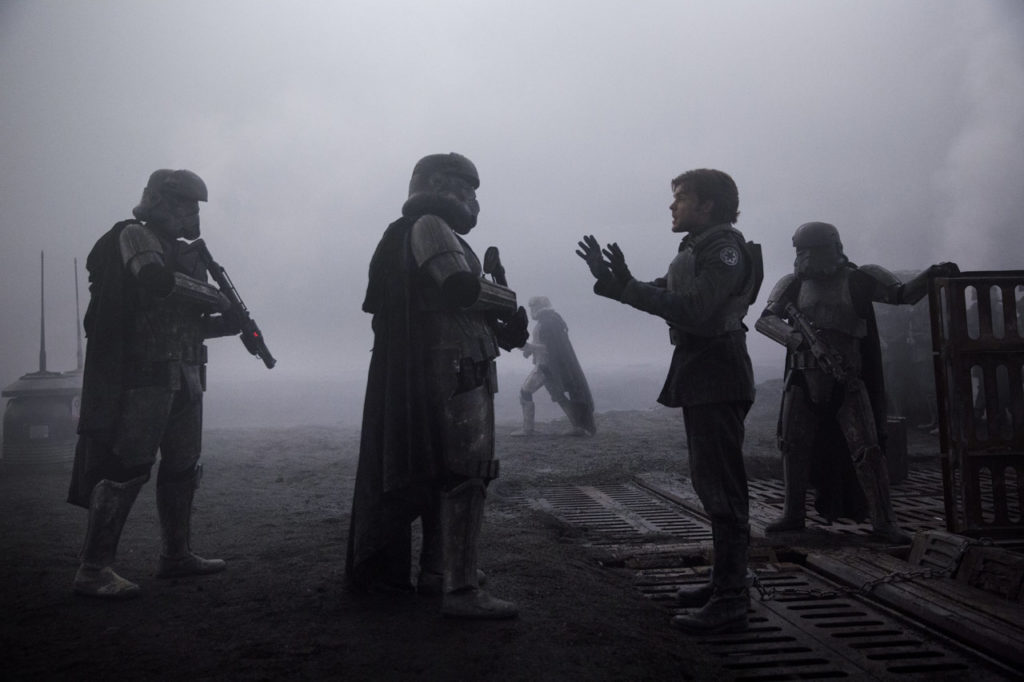 "As a bonus fact, Dave and fellow puppeteer Damian Farrell -- both of whom were Team Porg and Team Yoda in The Last Jedi -- played the two Mimban stormtroopers who threw Han to 'The Beast.'"

"Solo is the first Star Wars film not to feature R2-D2. It did, however, have six other R-units in various roles. This brings the total number of different R-units in the new movies up to 17 -- 18 if you include C1-10P, a.k.a. Chopper, in his cameo in Rogue One. Most of these droids were built and operated by members of the UK R2-D2 Builders Club." 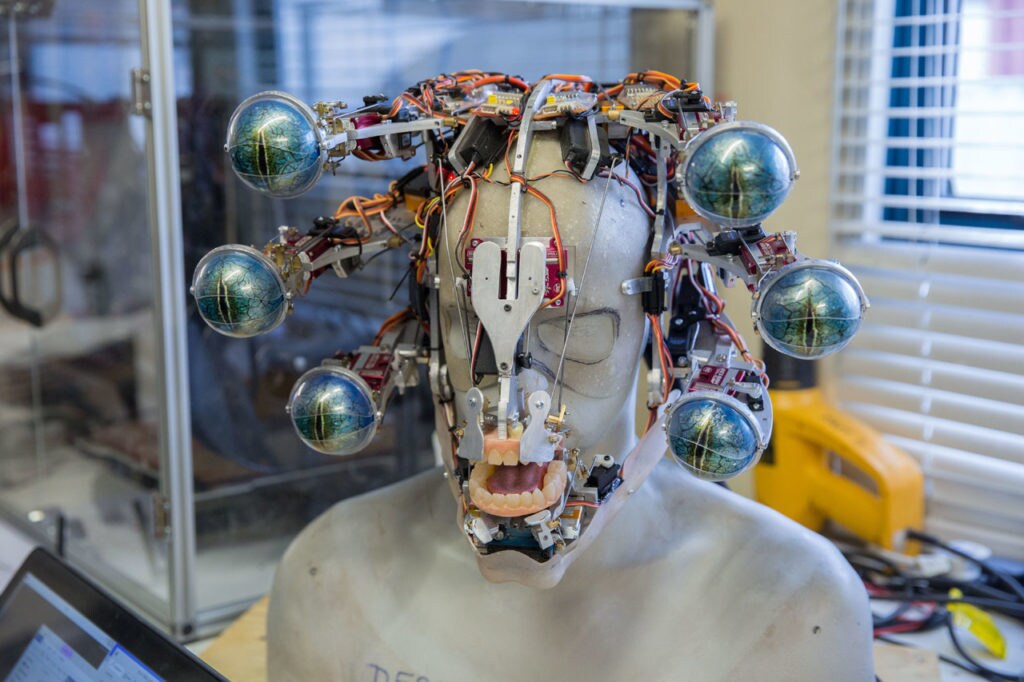 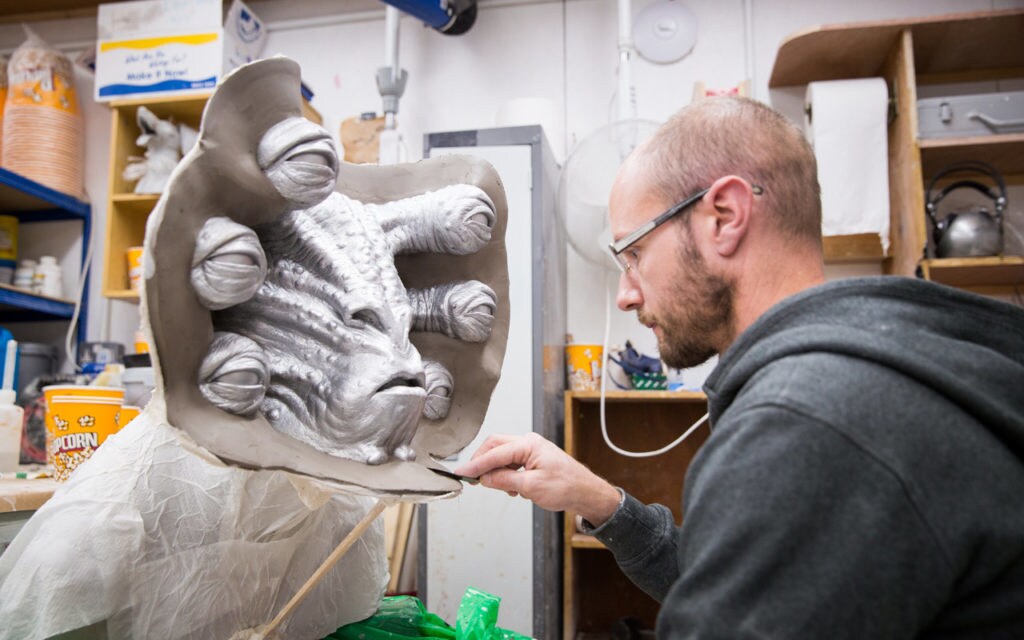 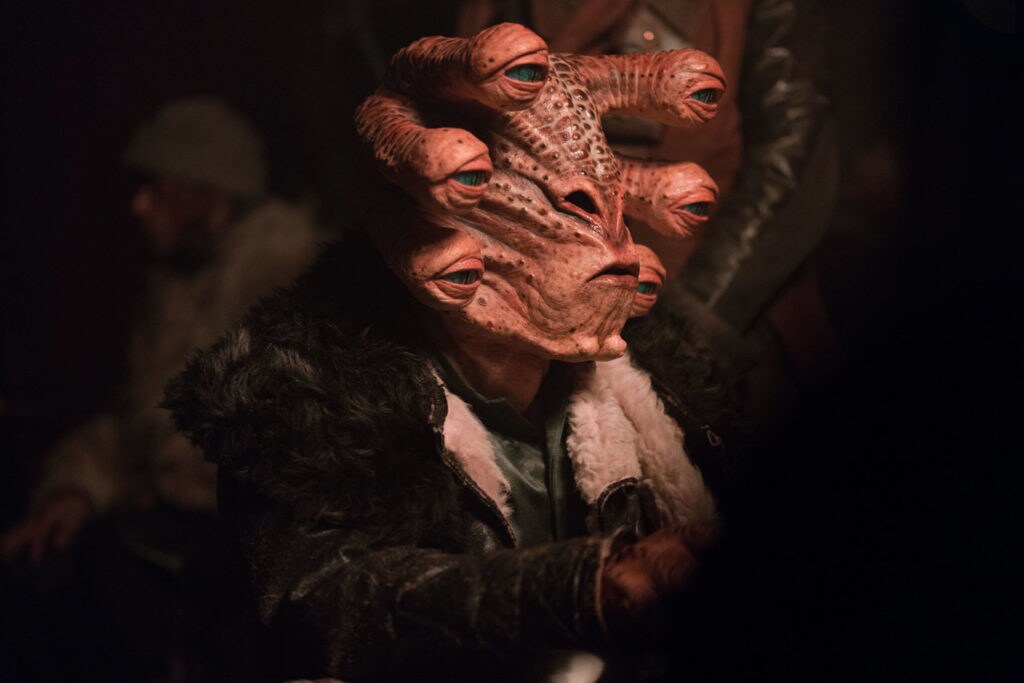 "It was widely believed that Argus 'Six Eyes' Panox is a CGI creation. He is, in fact, a fully practical creature! Actor Derek Arnold, who also played Pao in Rogue One, performed the physical movements while Richard Coombs and Matt Denton puppeteered his face. The head itself weighted approximately 8 pounds, contained 50 servomotors, and utilized a special gyroscopic rig designed and programmed by Denton, which allowed the eyes to react to Derek’s head movements and return naturally to their resting position. Each eyestalk could also be puppeteered individually to give Argus full ocular advantage during the game, to great comedic effect." 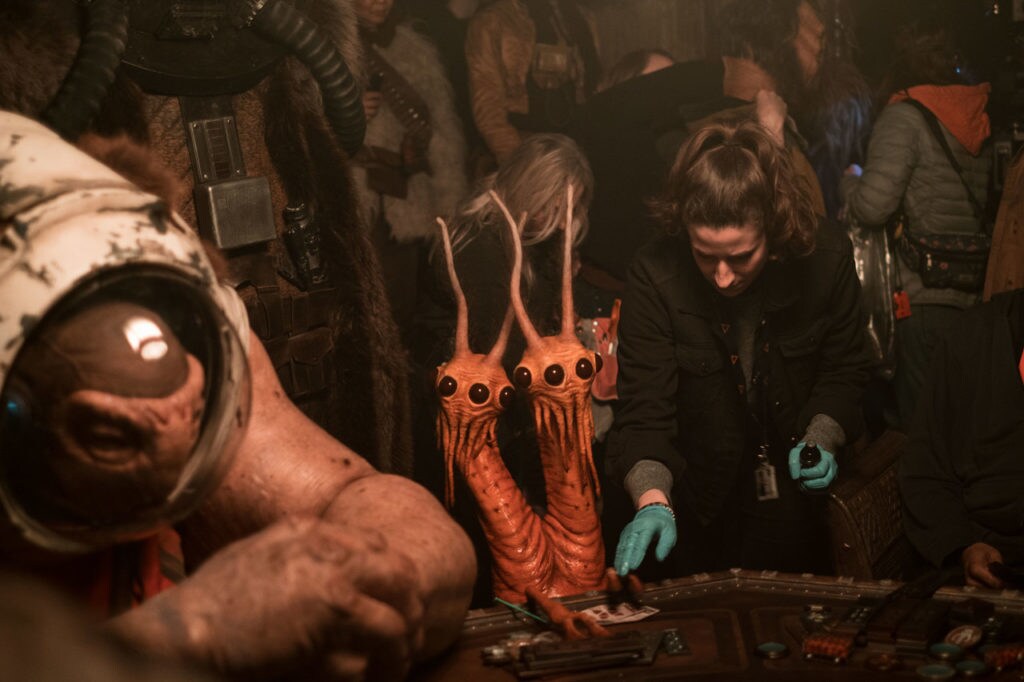 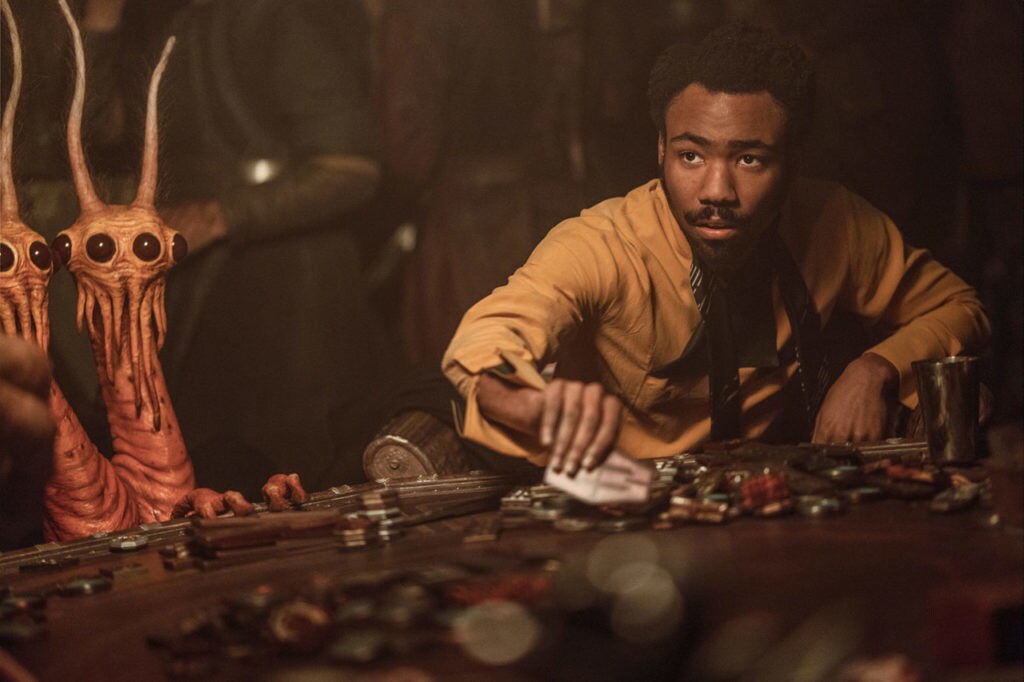 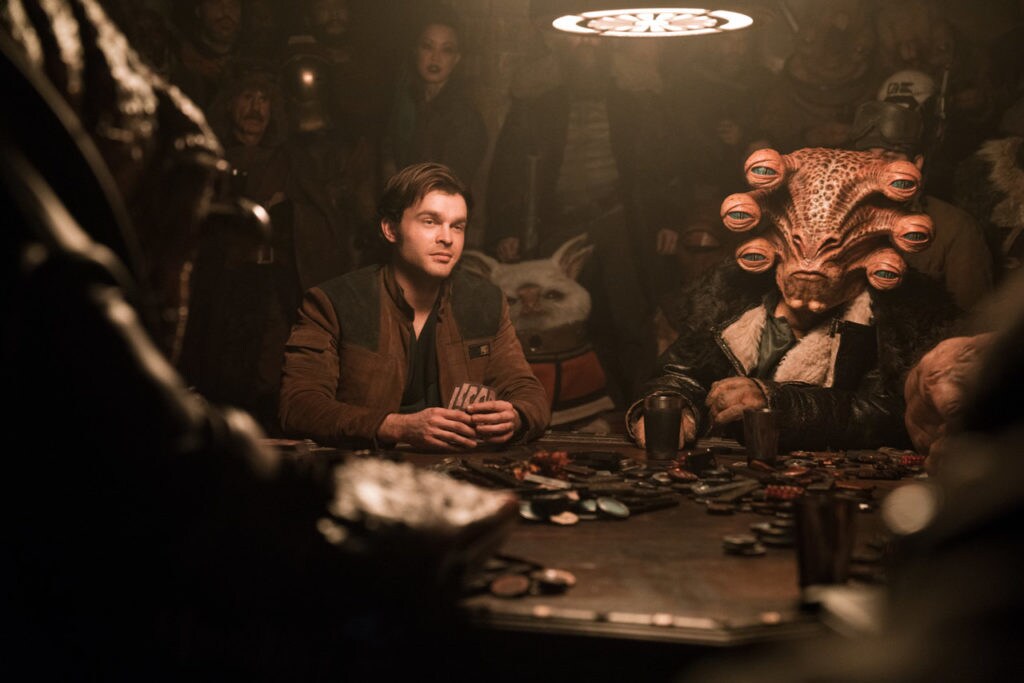 "The various creature performers around the gaming table went to a three-day sabacc school, along with actors Alden Ehrenreich, Donald Glover, and Joonas Suotamo to learn the intricacies of the game and add an air of authenticity to the scene.

"For the Fort Ypso lodge scene, the creature effects department had 30 crew members working alongside 44 performers to bring 23 creatures and droids to life." 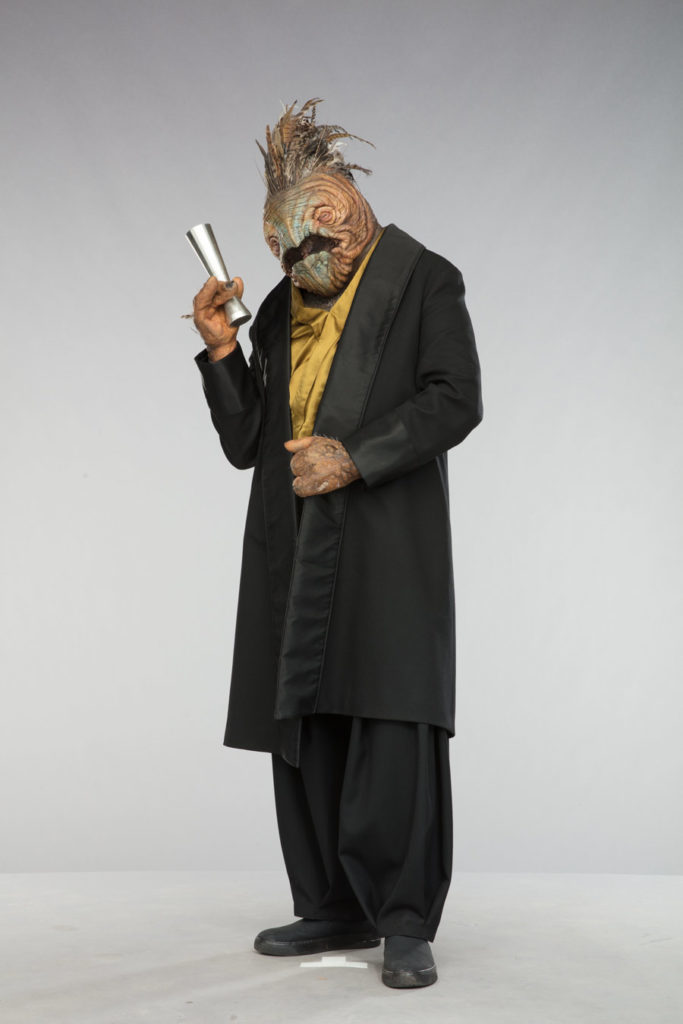 "I got to play Hirang Birren. Originally known as parrot man, the character is seen fleetingly on Dryden’s yacht, and later in the film his ‘frontier cousin’ can be seen congratulating Lando after he wins the first sabacc game. Chris Clarke, who built the mechanics of the head, performed the face and puppeteer Colin Purves was in my ear giving me directions, as my vision was very limited. I was thrilled that the character is named anagramically after me!" 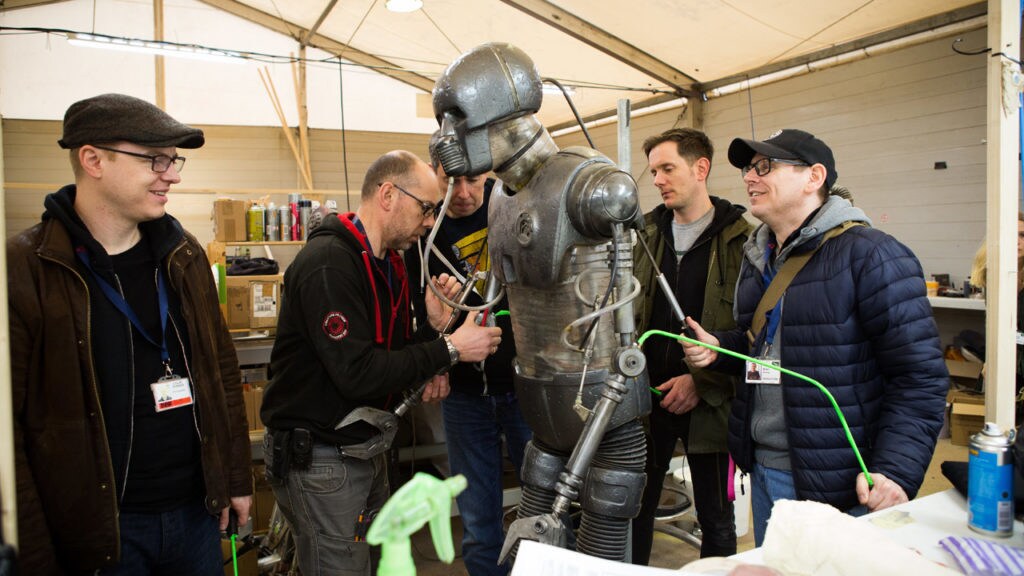 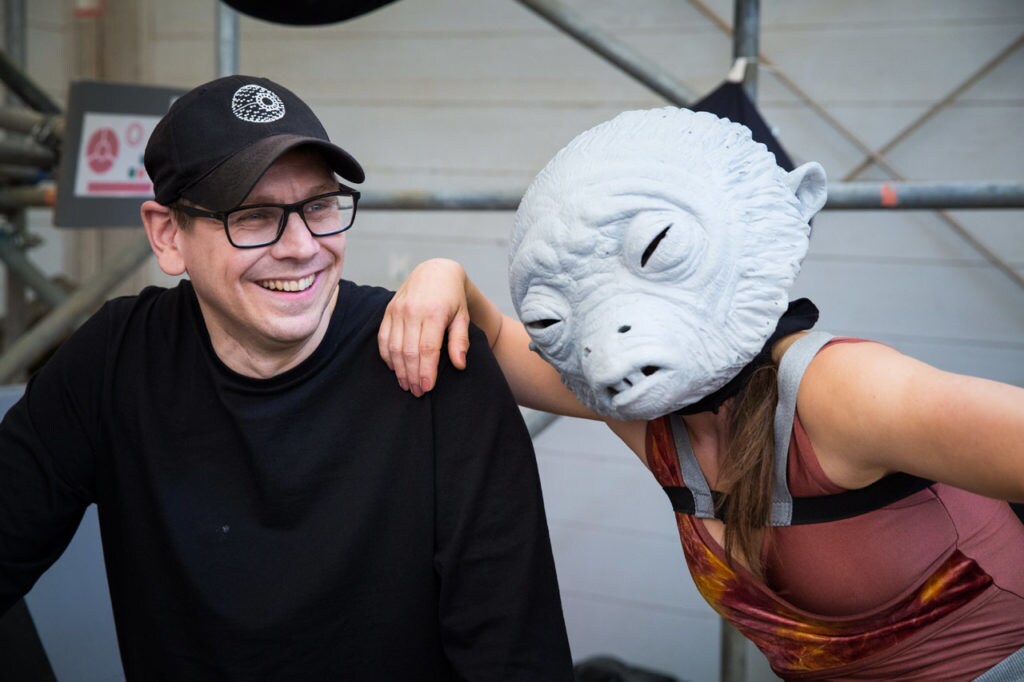 Herring's Thoughts on His Work with the Creature Shop

"As a Star Wars fan of over 40 years, working in the creature shop is a career highlight. Sometimes our work is heavily featured, sometimes it’s seen in shadows as the action passes by. But it is the creatures and droids that make up the backdrop against which these epic stories are told, and I for one am very happy that practical effects are as important in the Star Wars universe today as they were when George Lucas first took us on this adventure a long time ago."

Solo: A Star Wars Story is available on Digital and Movies Anywhere, and arrives on 4K Ultra HD, Blu-ray, DVD, and On-Demand on September 25.