SDCC 2018: 12 Things We Learned from the Star Wars: The Clone Wars Panel

Plus never-before-seen concept sketches and photos from the instant-classic discussion. #CloneWarsSaved!

Today's Star Wars: The Clone Wars 10th anniversary celebration at San Diego Comic-Con will be, to paraphrase a certain Sith Lord, long remembered. The panel, moderated by Amy Ratcliffe and featuring Dave Filoni (supervising director), Athena Portillo (line producer), Ashley Eckstein (voice of Ahsoka Tano), Matt Lanter (voice of Anakin Skywalker), and Kevin Kiner (composer), was filled with fun stories, emotional reminiscing, and some really, really huge news. Here's our full report from inside the room where it all happened -- along with a collection of never-before-seen Filoni sketches shown throughout the discussion, as well as photos from the panel.


1. The. Big. News. At the end of the panel, Ratcliffe related that Filoni had something he wanted to share with the fans. "It's an anniversary," he said, " been 10 years. And you guys deserve something for being so great. A present, if you will....We thought if there's one thing we could give you, what would it be. So here you go." The lights dimmed and the above trailer began to play. When it became clear what this was -- an announcement that Star Wars: The Clone Wars was coming back -- the room erupted. When the lights came up, there was a standing ovation. It was a you-had-to-be-there moment, and will go down as a great one in Star Wars history. "Obviously, we wanted to do this. I think it's going to be great," Filoni said. "The early stuff we've been getting in on the show just looks phenomenal. I wasn't sure if we could ever do it again. But I think the goodwill that you guys have had to believe in this show is shared by the crew, and they are so intense about making this thing incredible for you." #CloneWarsSaved, and thanks to you.

2. Star Wars Celebration IV attendees can thank George Lucas for that first look at The Clone Wars. Filoni opened the panel by playing the very first Star Wars: The Clone Wars trailer, which was the very first footage of The Clone Wars ever shared with an audience. It only screened at Star Wars Celebration IV in Los Angeles in 2007. "It was hard to find at Lucasfilm," Filoni joked. "We had to go through... I can't tell you how many drives to find that thing. The whole trailer came about because we were editing. It was basically the Friday before the week of Celebration....George liked what he saw, and said, 'Well, this will be great. What are we doing next week at Celebration?' I said, 'Oh, we're not doing anything. We were told we're not showing anything.' And he was like, 'What?'" Lucas made a phone call to someone and relayed that a trailer would be ready -- and he asked to see a finished version on Monday. Filoni and Jason Tucker worked over the weekend, grabbing music from Revenge of the Sith and cutting the piece together quickly. "Then we went to George's house and showed it to him on Monday," Filoni said. "We had a trailer. It thought it was a special thing that you guys should see."

3. The Clone Wars was a new creative outlet for George Lucas. The Star Wars creator launched The Clone Wars for a simple reason: he had stories to tell. "I think it was just to explore the many different stories that he had in mind over the years," Filoni said. "Making the films, he had so many ideas. He was focused on the Anakin Skywalker story for the films, and he wanted to go down and see what all these other characters were about, and introduce new characters." 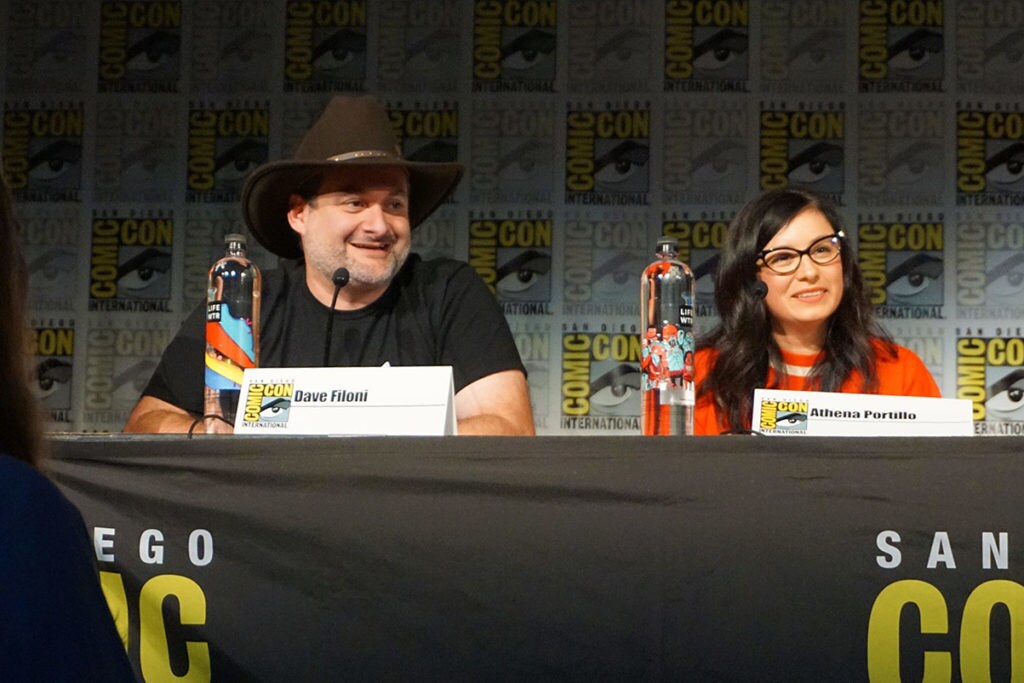 4. Filoni didn't originally think that The Clone Wars would feature the galaxy's most famous Jedi. Showing old sketches from the early days of The Clone Wars, the supervising director of the series recalled how he first thought that Kenobi and Skywalker would be off-limits. Filoni and company came up with something that was more of an "original trilogy idea of a crew: two Jedi that worked with these smugglers in the black market." He was in for a surprise. "When we took this idea into George, he looked at it and was like, 'Mmmhmm. So, Anakin Skywalker is going to be doing this. And Obi-Wan Kenobi is going to do this.' We just never presumed that we would be working with those characters. You know, because who am I to write Anakin Skywalker, this hugely important character? But George was like, 'I'm going to teach you all about this,' and he did. So, we ended up with the show we did under his direction."

5. Writing The Clone Wars was like a marathon and sprint combined. With a photo of George Lucas at a whiteboard during a story meeting, Filoni discussed the demanding schedule for breaking a season. "We would sit in that room for two weeks straight -- me, George, and the writers -- and we would hash out all the stories. All 26 episodes for a whole season in two weeks. I think we had to do about three episodes a day." If Lucas ever left the room and work continued, he'd come back and often erase whatever was added to the board, Filoni joked. "It was just really fun....It was really fun for him to basically be teaching us Star Wars every day."

6. Ashley Eckstein has her own collection of Dave Filoni original art. Filoni is admittedly not precious about archiving his concept work and sketches. All the better for Ashley Eckstein, voice of Ahsoka Tano. "After our sessions, he'd have like, a stack of sketches," she said. "I'd scrounge and collect his sketches. And I have a folder, I've kept it all these years, of your sketches."

"Lucasfilm would probably be interested in that," Filoni said, garnering laughs from the crowd.

"It's my most prized possession!" Eckstein replied. Finders keepers, we say. 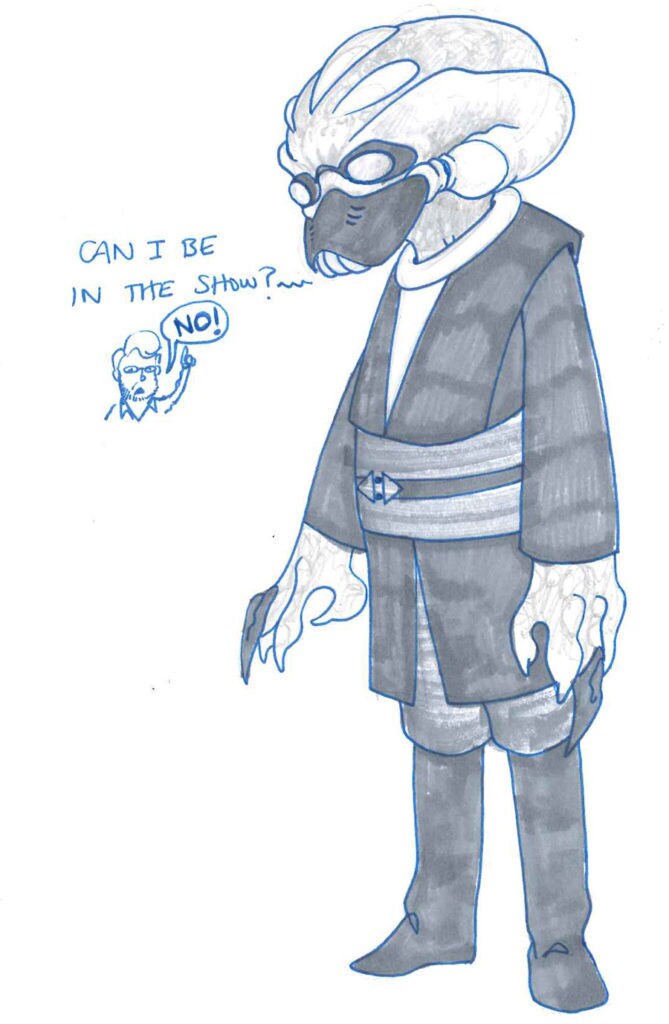 7. Filoni pitched a baby Plo Koon. It didn't fly with the boss. But the crowd at SDCC approved! 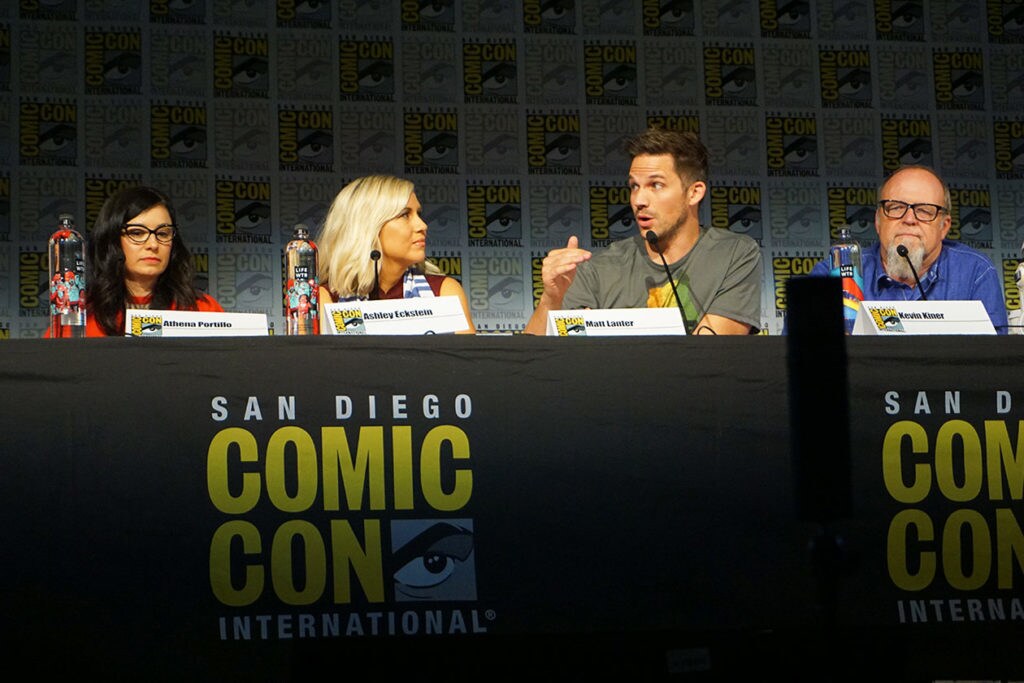 8. The "Clovis" arc was meant to show that Anakin and Padmé weren't a perfect couple. Rush Clovis, a politician who eventually joined the Separatist movement in The Clone Wars, was a friend of Padmé's -- but he wasn't that well-liked by her secret Jedi husband. Filoni wanted to add dimension to Padmé and Anakin's relationship. "It needs to have conflict in it. Any relationship, over time, would naturally have that. So we liked the idea of putting pressure on them, and maybe they weren't this completely 'utopic' couple during the Clone Wars. They were stretched apart. They had to combat to stay together and fight for what they believe in in each other." Matt Lanter discussed how Anakin's confrontation with Clovis illustrated how the Jedi could quickly lose his temper, filling in an important trait about the character before Revenge of the Sith. Still, the actor remains bemused by one aspect of their fight. "Anakin doesn't even use the Force against Clovis. He's just so upset, he uses his bare fists."

9. Recording the final Season Five arc, in which Ahsoka leaves the Jedi Order, wasn't easy for the actor behind the Padawan. "Dave pretty much worked on a need-to-know basis, but he did let me know that Ahsoka was walking away and I wouldn't be back for awhile," Eckstein said. "So for me, it was goodbye. I recorded these episodes and literally, I felt like my heart was beating outside of my chest because I was essentially saying goodbye to these guys and I didn't know when I would be back." Eckstein continued with some kind words for Filoni, which seemed to prompt an innate response of hiding under his hat: "He doesn't like when we say nice things about him, but I have him trapped," she said. "Dave is honestly the best director I've ever worked with." 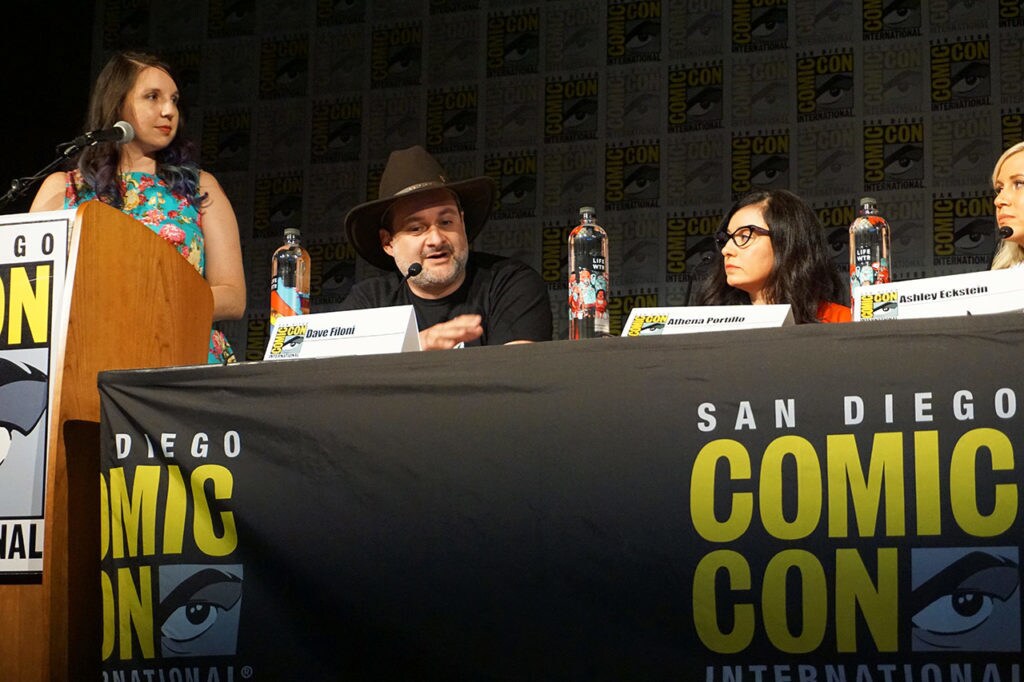 10. Everyone learns and changes. Even our little green friend. That was the point of the "Lost Missions" episodes in which Yoda faces the mysteries of the Force -- battling a dark version of himself and going on a journey of personal discovery. "This is a deep dive into the Force that George wanted to explore with Yoda, and Yoda confronting his own dark side, just to kind of show that everybody has challenges, even Yoda," Filoni said. "These characters all evolve." 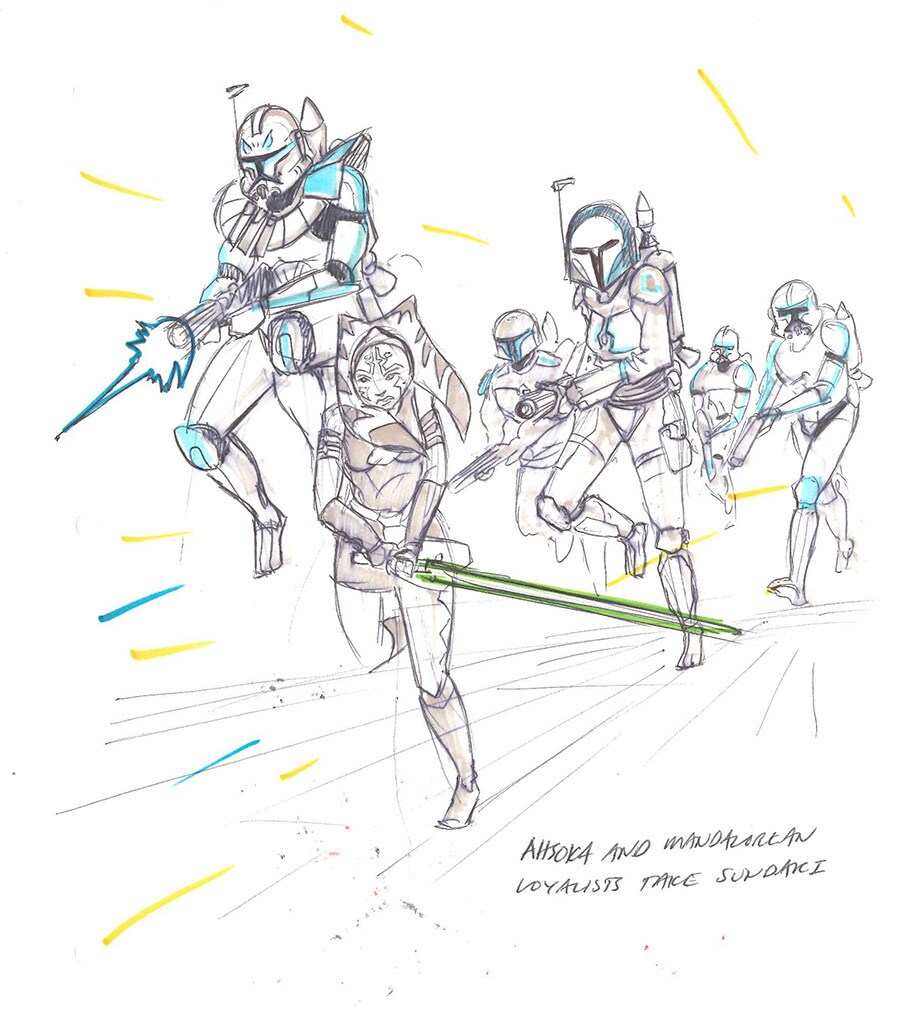 11. Dave Filoni's sketches never fail to inspire. While we've previously established that Ashley Eckstein recognizes that Filoni is an amazing artist, it warrants emphasizing. There were tons of super-cool sketches shown from throughout production, many made in the room with George Lucas during story sessions. Some leaned closer into Revenge of the Sith, like the drawing of the Wookiee Tarfful meditating before a tree -- asking for permission from the forest, in fact, to battle the Separatists there. The image above comes from "The Siege of Mandalore," never produced but referenced in Star Wars Rebels. See below for more!

12. One of the series' most memorable pieces of music -- Ahsoka's final encounter with Anakin outside the Jedi Temple -- was completed in a, let's say, creative way. Filoni had called composer Kevin Kiner, who was recording the finale's score overseas, and asked if they could extend the music for the scene just a bit. Kiner went to his hotel room and, without any instruments, music sheets, or computer program at his disposal, wrote eight bars, by ear, drawing the notes and chart himself. "It turned out okay, I think." They rolled the clip, which brought tears to some in attendance -- including Eckstein.

A collection of Dave Filoni's concept sketches for Star Wars: The Clone Wars: 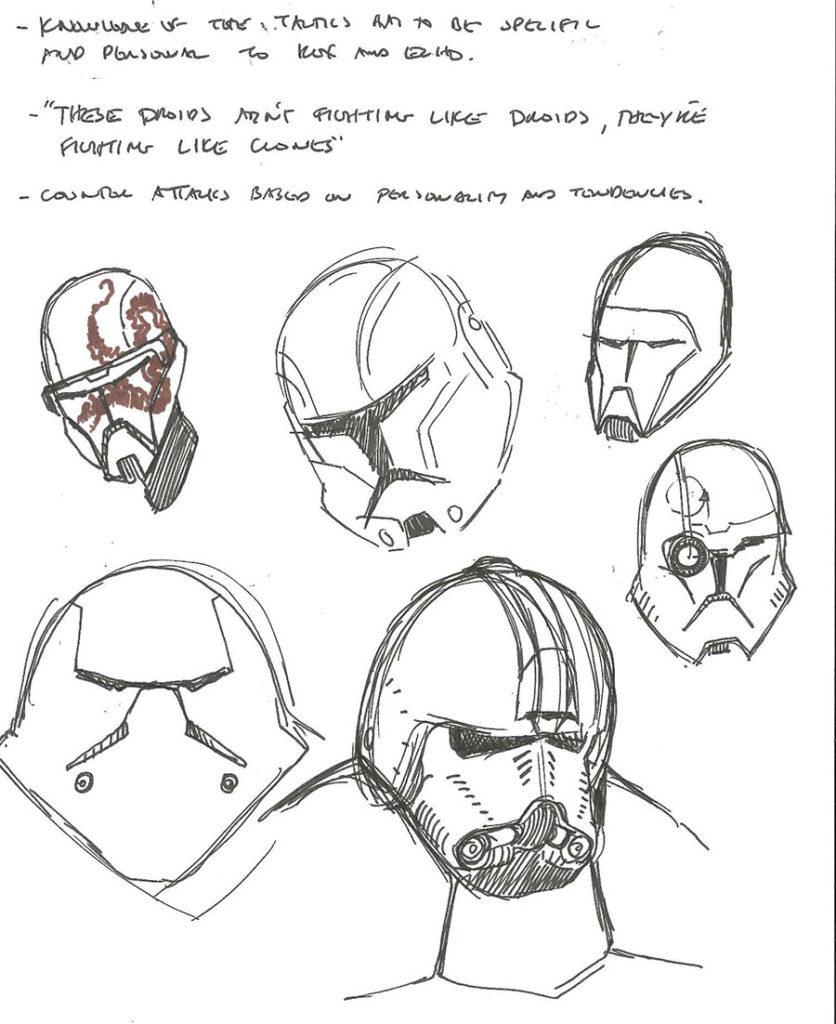 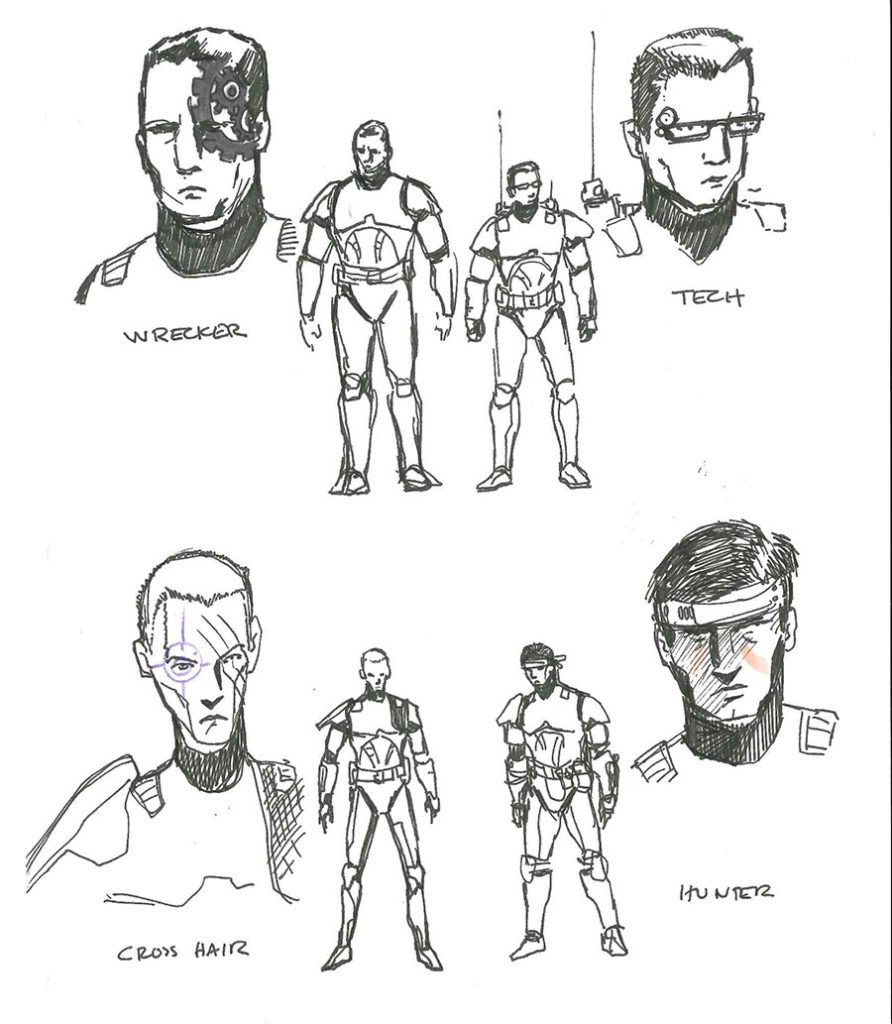 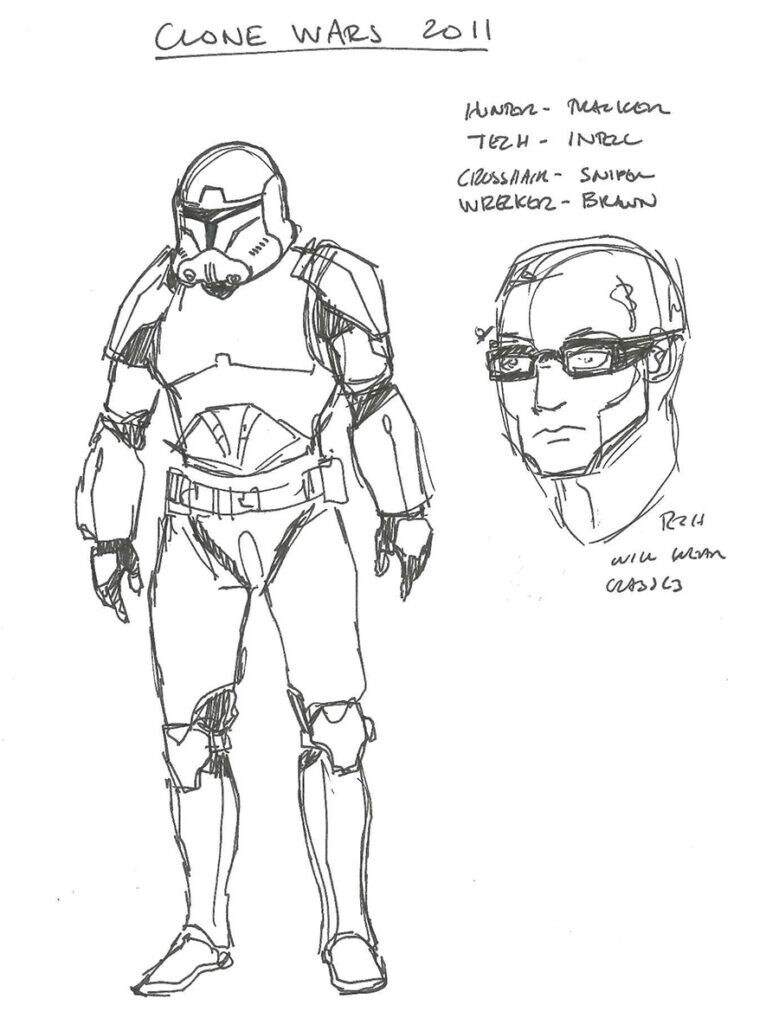 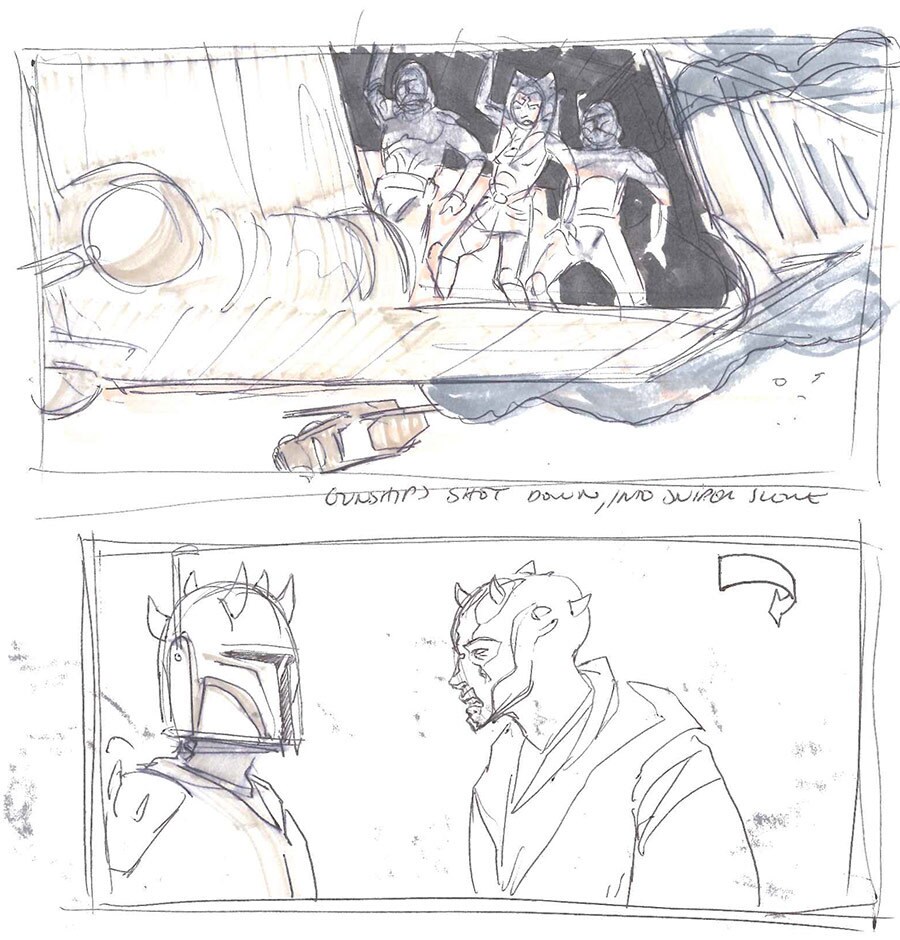 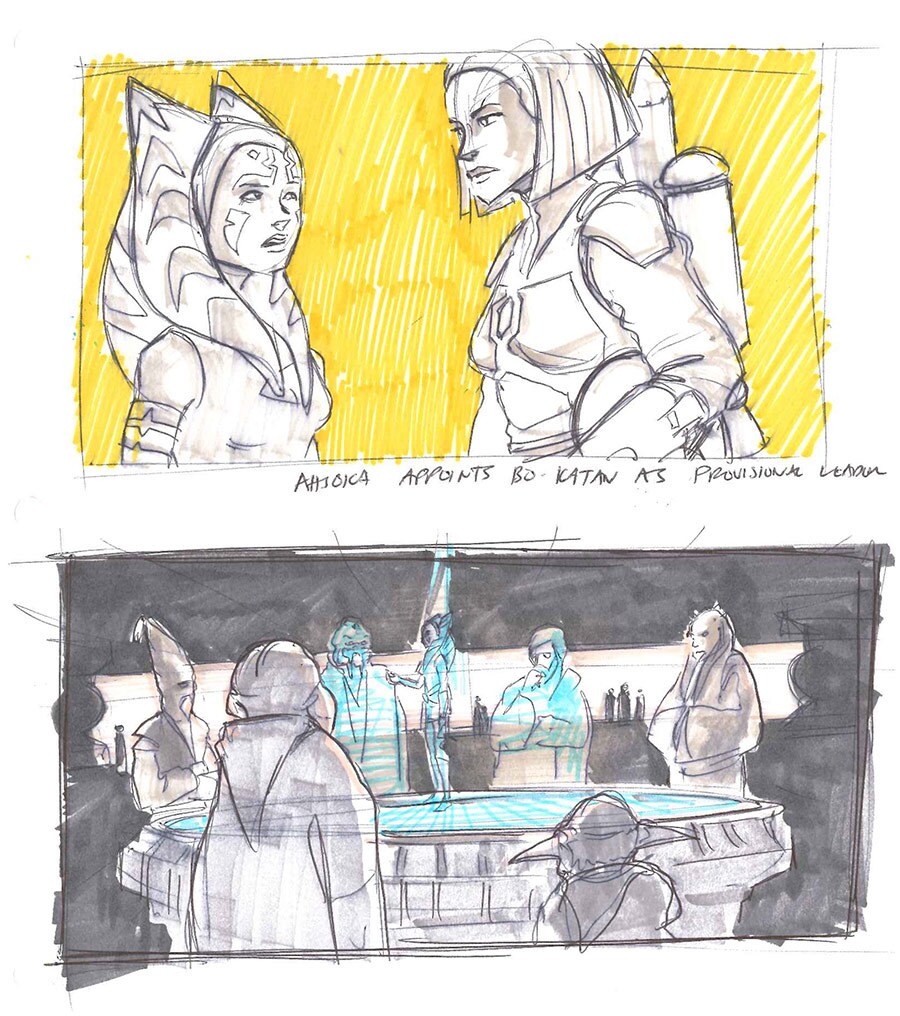 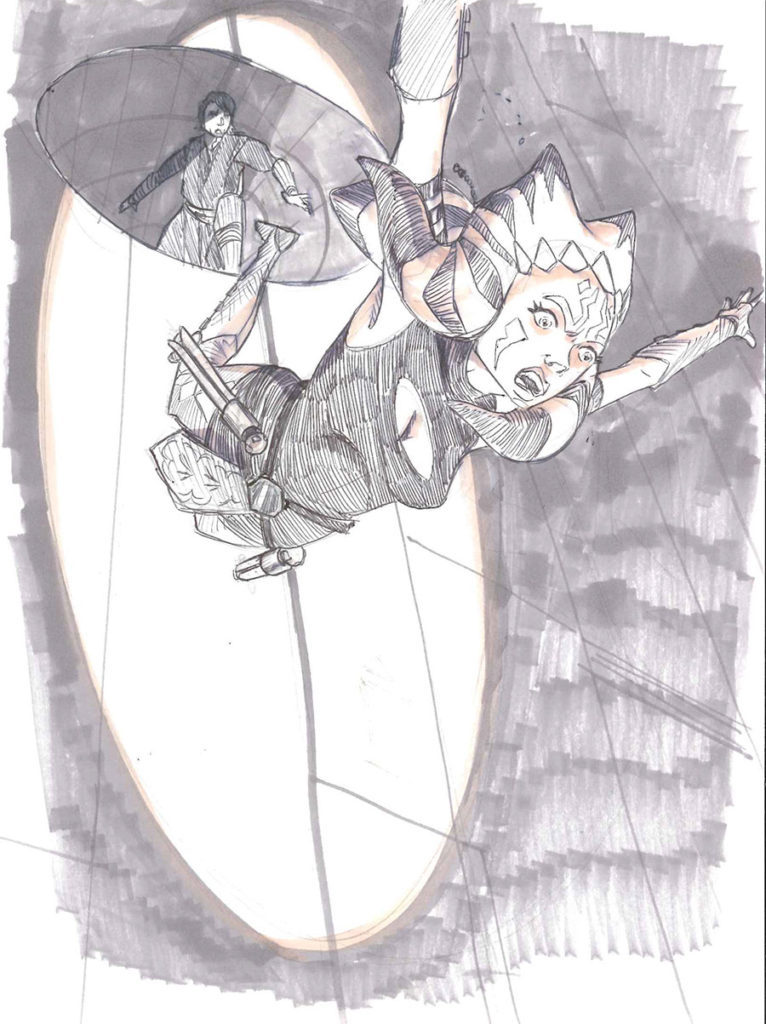 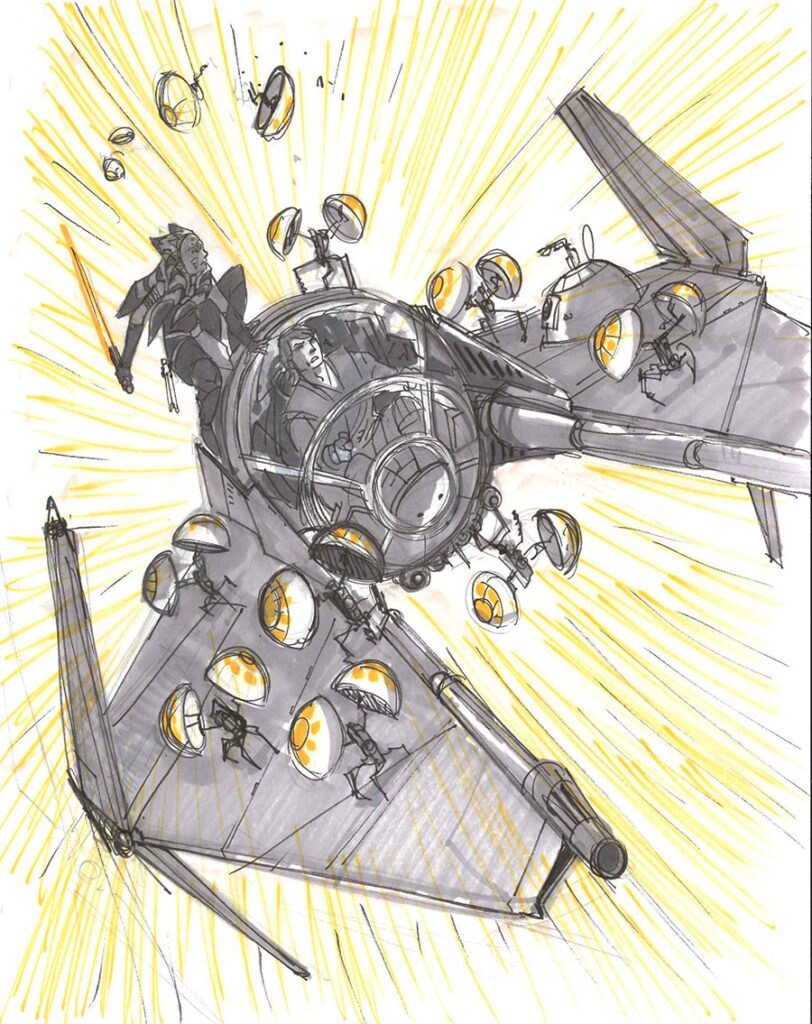