Reimagining a Saga: How Disney-Lucasfilm Press Made the Beautiful Star Wars: The Original Trilogy - A Graphic Novel

The creators of the bestselling adaptation take StarWars.com behind the panels. 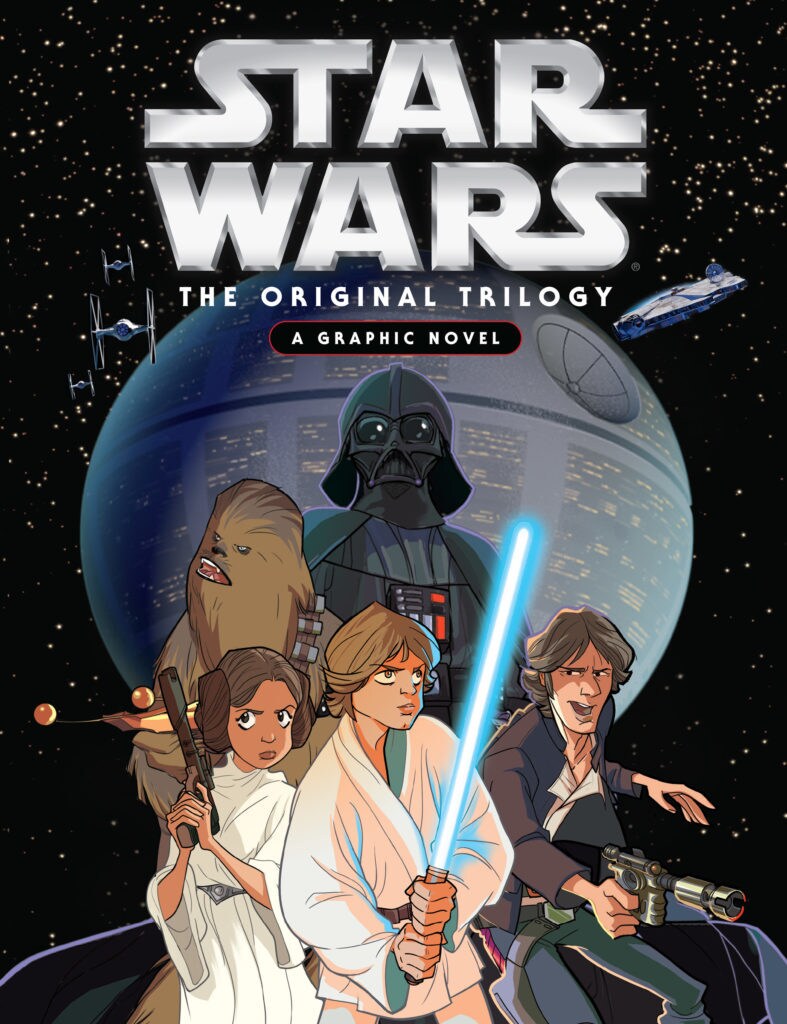 Comic book adaptations of the Star Wars films are something of a tradition, one dating all the way back to 1977 and Marvel's very first Star Wars comics. But these adaptations are not just straight-forward retellings. Indeed, they offer us another way to experience these movies we know so well. Sometimes the film's camera angles are recreated by the artist, sometimes they're not. Sometimes a facial expression is heightened just a bit, giving us a new insight into a scene or character. And we're not just passively taking in the story anymore; rather, we're active participants -- reading, admiring (and, if we want, studying) the art, and connecting the dots between panels. Disney-Lucasfilm Press' Star Wars: The Original Trilogy - A Graphic Novel, featuring all-ages comic book versions of A New Hope, The Empire Strikes Back, and Return of the Jedi, is the latest addition to this legacy, and a major one. The art is beautiful, like Star Wars interpreted as a classic, cel-animated Disney film of yesteryear, with a vibrant pop of color. The storytelling is sharp and efficient, drilling down the drama and action to the essentials but still packing an emotional punch. It would be at home on the shelf of the most serious comic book collector or on the shelf of that collector's just-getting-into-Star Wars young son or daughter. StarWars.com e-mailed with the book's creators for a chat about how it came to be -- and snagged a first look at the upcoming adaptation of Star Wars: The Force Awakens.

StarWars.com: We have had Star Wars comic book adaptations before, but never anything quite like this. Where did the idea come from and what are you most proud of about it?

Guido Frazzini (editor): What is interesting in this scenario is that the span of time between the release of the original Star Wars movies and the latest chapter of the saga spans generations. Star Wars fans who saw the movies in theaters many years ago as kids are now adults, and many of them have children who didn’t really experience the Star Wars phenomenon, aside from what their parents told them or from watching the films on DVD. We recognized that the love for the Star Wars franchise is certainly something parents want to share with their children. And what’s better than a comic book retelling of all the saga films, which can be enjoyed by parents and their kids together? The release of the comic book adaptations were a way for parents to introduce their kids to the Star Wars saga. We wanted to create a series with an extremely simple and readable layout, so that even younger kids could easily get through the story. At the same time, we had to make sure that the story, the action, and the humor were strong, as well as the richness and color of the settings, so that even core Star Wars fans would enjoy it.

StarWars.com: The first thing that really struck me was the art. It’s beautiful and looks almost like the classic Disney animated style -- very expressive, colorful, and alive. What can you tell us about adapting the films to this style, and why do you think this style works for Star Wars?

Roberto Santillo (art director): The style is a precise choice we made when choosing the artistic direction. We wanted to celebrate the original saga as best we could, while remaining fully aware of the fact that younger audiences had never experienced the thrill of seeing the original films on the big screen. We wanted to create art that brings back a sense of wonder and surprise; art that transports people to the worlds it displays, just like in the original saga films. Through the combination of utilizing a 2D format, which is much less realistic than 3D, and the use of vivid colors, we achieved what we set out to do.


StarWars.com: In terms of the art, there’s a nice mix of recreating scenes as we saw them in the original films with new angles or points of view. What was the process like in terms of deciding what to change visually and what to keep the same?

Roberto Santillo: We recognized that certain sequences from the original saga are iconic. Therefore, we approached the art with great care working with the layout artist Matteo Piana who did a very meticulous job in pre-production -- which is unusual when creating comics. Other times, we had to switch up the format in order to fit with our new take on the original story; one that would appeal to all readers. Here, as well, a precise choice was made where we avoided using extreme shots and outrageous perspectives in vignettes. We went with an “open” direction, similar to filmmaking, which allowed us to make the most of the saga’s original matrix.

StarWars.com: I love the small authentic details throughout the comics, like Han’s brown jacket in The Empire Strikes Back -- which is the jacket’s true color, even though it looks blue in the film. What research did you do to add elements like that? Any others you’re particularly excited about?

Roberto Santillo: We paid close attention to the original chromatic references in the films. We sought to replicate the original colors of the costumes, the means of transport, and the accessories without using lighting to over-modify them. In part, we drew our inspiration from Disney’s Golden Age cartoons. It was a choice we made in order to reward our many avid readers, who can recall to perfection the original colors of all the accessories from the original films. Thanks to Davide Turotti, the color artist for the comics’ backgrounds, and the artists at the Kawaii Studio who colored the characters, we applied this chromatic treatment wherever we could. We are certain that all readers, including adult fans, will be satisfied when they see their favorite Star Wars props from the films presented in their original colors.

StarWars.com: How did you approach trimming scenes and dialogue? For example, the Jabba sail barge sequence is only three pages in the comic, yet is still exciting and conveys all the essentials from the film.

Alessandro Ferrari (writer): The hardest part of a graphic novel adaptation is fitting a 120-minute film into half the number of pages. There is one page of comic for every two minutes of the movie, but in any two minutes of a Star Wars film so many things happen! We chose to break up the film sequences into “moments” -- for example Jabba sentencing Luke, Chewie, and Han to death; Luke jumping off the plank; R2-D2 shooting Luke’s lightsaber -- and decided to delete everything else. We concentrated on only the main moments, and then the readers can create the rest of the story inside their minds. 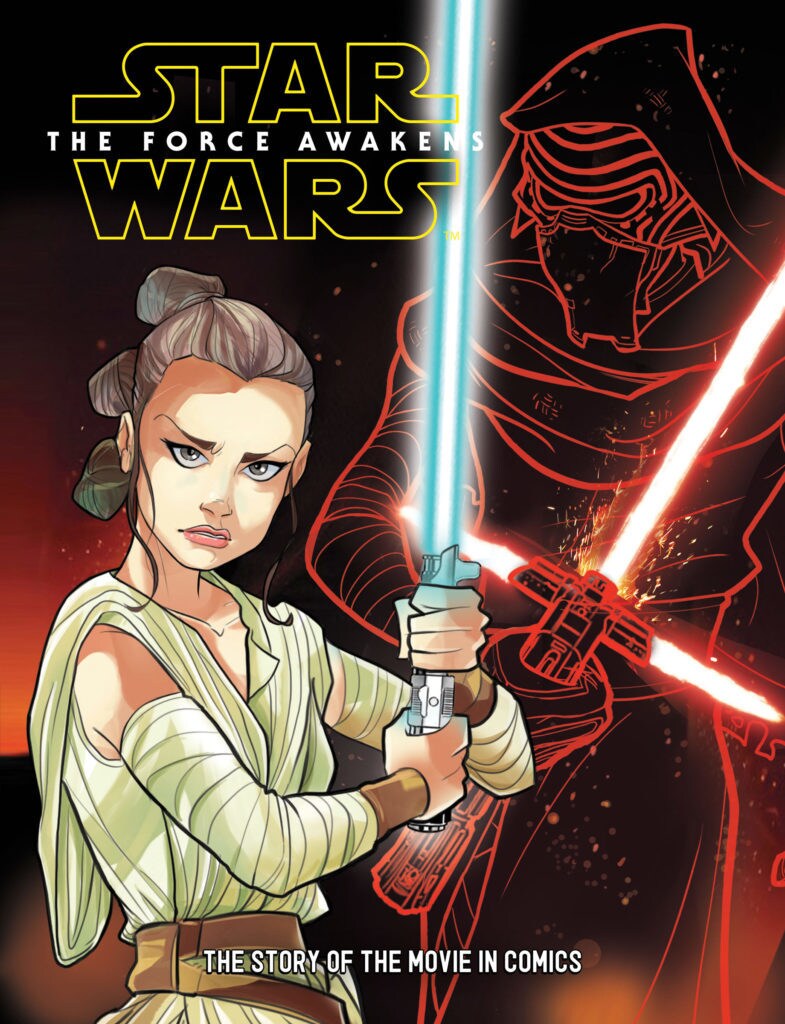 StarWars.com: It was announced at San Diego Comic-Con that graphic novels of the prequels and The Force Awakens are in the works. What can you tell us about them?

Guido Frazzini: We have almost completed our plan to deliver one graphic novel for each of the movies in the saga so far. They have all been delivered and Revenge of the Sith is being given the very final touches. We look forward to the release of the second volume with the prequel trilogy, hoping to match the success of the first beautiful hardcover edition -- collecting Episodes IV, V, and VI -- that hit the New York Times Bestsellers List for 13 weeks!

The prequel trilogy will publish in a hardcover edition collecting all three episodes in April 2017 in the US and, yes, publishers are localizing the Star Wars: The Force Awakens young graphic novel as we speak.

Various creators of Star Wars: The Original Trilogy - A Graphic Novel look back on their experience creating the book.

Alessandro Ferrari (writer): Star Wars has always been one of my favorite stories. I have watched the original trilogy again and again since I was a kid. I know every scene, and I know all the lines by heart. So, when the Disney editorial team asked me to work on a comics adaptation I thought, “This is my dream job.” But when I began trimming scenes and dialogue to build the comic pages I realized it was going to be harder than I thought. The first preliminary studies I saw were so amazing that I got scared: “What if I ruin everything? What if I can’t transfer the original emotions to the page?” My editor, Guido Frazzini, kept telling me to use fewer panels, which was extremely difficult for me because I didn’t want to leave out anything important from the films. I have been adapting movies into the graphic novel format since 2006, so I know how to do it, but for the first time I wasn’t so sure I could do it.

Then I realized that Guido was right. I didn’t have to simply adapt the story; I had to re-tell it, as if I was a father telling a bedtime story to my child. Of course I couldn’t tell them everything, so I had to understand what would really make them feel the emotions inherent in the movies. When I saw the results of what the art team had translated onto the pages, and the way the script was flowing, I finally felt less afraid.

Davide Turotti (background painter): Working in collaboration with Disney is a huge undertaking and there is also immense personal and professional satisfaction.

The day they called me to join the team and told me that in less than two years we would create a comic book version of the entire Star Wars saga, I didn’t know whether to jump for joy or go find some place to hide out of fright. Then I remembered Grand Master Yoda’s advice to young Luke Skywalker: “Do. Or do not. There is no try."

Igor Chimisso (character design and clean-ups): When I was offered to help create new comic versions of the Star Wars characters, I was floored because of the symbolic value of those characters. I was driven to come up with all-new graphics, something really special. A production that kept its distance from a host of previous incarnations: not overly serious and adult and not in an overly cartoon-style. There is a dose of modernity, but the spirit of the all-time classic remains. I was entranced by the idea of focusing on the relationships among the characters. It was an awesome experience, and a truly magical combination.

Matteo Piana (layout artist): Star Wars -- I had followed the conversation with attention up until those two words, when suddenly, I found myself transported back to when I was little and experiencing the feelings I had when I saw Star Wars: A New Hope for the first time. After spending almost 20 years working on comics and illustrations, I never thought I would be transported into the Star Wars universe I had grown up with; and that partly inspired me to pursue this career.

I loved drawing all of these characters, especially Obi-Wan, C-3PO, Han Solo…and Jabba, too! But my greatest joy has been the opportunity to delve into the settings of this world, and to bring to life the places these characters inhabit.

It’s been an exciting learning experience, especially because working in a team pushed me to improve my work and grow professionally. I am proud and honored to have been part of all of this.