The writer discusses his latest book detailing confidential documents from the "bigger, faster, and more intense world" of Star Wars.

In your hands, you hold a top-secret dossier of sensitive information vital to the Rebel Alliance. Rescued from the ruins of an abandoned base, the information inside has new vitality in the age of the Resistance. Classified documents, secret communications, and other intelligence — annotated by some of the most prominent war heroes — once helped to bring an end to the Empire, and may still hold clues to fighting the First Order today. Or at least, that's how it feels when you're gazing at The Rebels Files, enshrined in a portable vault and seemingly ready to spill all of the secrets on the birth of Mon Mothma's Rebellion.

In-universe, the collection was curated by one of the senator's most trusted aides, but the real-life scribe is Daniel Wallace. Wallace previously helped lay down the law for the lawless with The Bounty Hunter Code, channeled the most ancient wisdom of the early masters in The Jedi Path: A Manual for Students of the Force, and turned to the dark side to pen the Book of Sith, among others. He recently sat down with StarWars.com to exchange emails about his latest journey deep into the lore of The Rebel Files. The fully illustrated Deluxe Edition hit shelves last year, complete with the carrying case and stolen plans for the Death Star, with a later release of book alone in July.

StarWars.com: This certainly isn't your first time stepping into the Star Wars universe, having previously penned quite a few essential guides and roleplaying sourcebooks. How would you describe your creative approach to a project like this? After seeing the finished book, it seems like it must have been a daunting task.

Daniel Wallace: There's something fun about planning these kinds of "in-universe nonfiction" books, because you're not quite storytelling but you're not writing an encyclopedia either. My editor, Delia Greve, came up with the idea of making The Rebel Files a scrapbook made up of artifacts like news headlines, diary entries, ship blueprints, top-secret memos, and text conversations.

You're right that it was a daunting task. Both in coming up with unique styles for each individual scrap, and in making the scrapbook feel like a holistic story and not just an assemblage of parts. 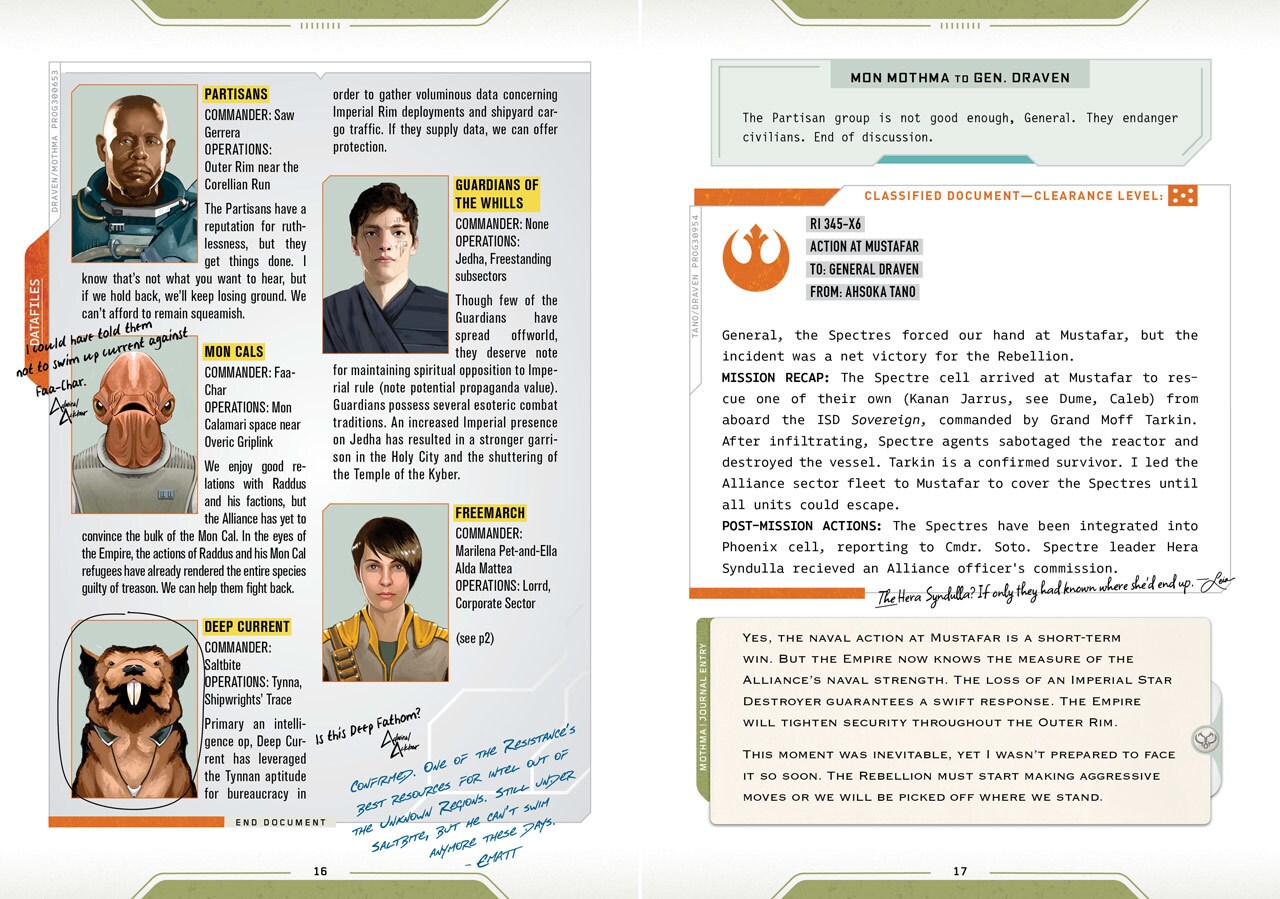 StarWars.com:  Still, this had to have been a tremendously demanding project in terms of the depth and breadth of information, covering so many eras and established films, TV shows, and published material. But the immersive, in-universe Star Wars books are some of my favorites because they plunge us deeper into the minds of the inhabitants, the political climate of the galaxy, and make the universe feel that much more alive. What was the most challenging part of working on this project and what are you most proud of now that it's complete?

Daniel Wallace: The Rebel Files presents an in-universe history of the Rebel Alliance from roughly the time of Star Wars Rebels up until the Battle of Endor, plus an additional running commentary laid down decades later by Resistance members like Poe Dameron and Admiral Holdo. That's a lot of ground to cover, and a lot of scraps to paste into a scrapbook!

I struggled with how to make everything feel cohesive, at least until I zeroed in on Mon Mothma as the central character. Mon Mothma is the most important figure in the Rebel Alliance, but she hasn't really been featured as much as you’d think in the expanded canon. I felt like we had never really discovered what she's all about. That’s why I enjoyed getting into her head, and thinking about how she might react to tragedies like the destruction of Alderaan. The Rebel Files contains private exchanges between Mon Mothma and her aide, Hendri Underholt, and those were my favorite parts to write. 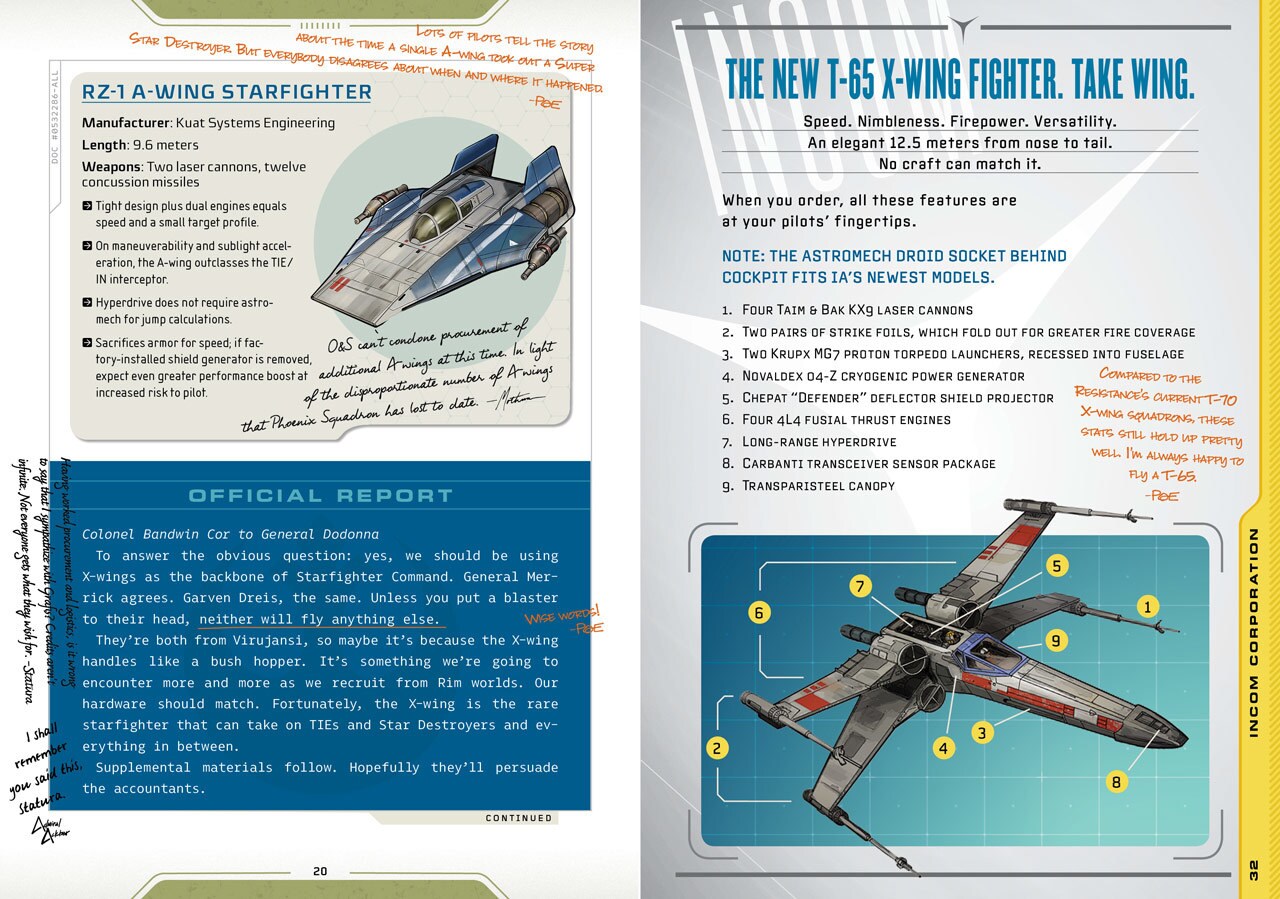 StarWars.com: There are so many layers here: news clippings, wanted posters, field manuals on combat tactics and flight, meeting minutes, scouting logs and classified missives. Official documents in our own universe can be a bit dry and dull. Certainly, the subject matter and the handwritten annotations from the likes of Admiral Ackbar, General Leia Organa, Poe Dameron and Vice Admiral Holdo give it a more lived-in feel here. How did you work under the parameters of the premise but still manage to keep the text lively and interesting? And how do you maintain so many distinct and well-known voices among the many characters represented in first person?

Daniel Wallace: Nothing in the Star Wars universe should be dry or dull unless it’s for comedic effect. I’ve always believed that the Star Wars world is bigger, faster, and more intense than our world. If you watched paint dry it’d be some kind of self-spreading chromatic space paint, and it would be utterly fascinating.

That’s why memos in The Rebel Files tend to get right to the point, and why the book’s references are thick with characters you’ve met before and starships you’ve seen on the big screen. I’ve always had this theory that if you could spend a week in the Star Wars universe, everything would just work. You’d instinctively know what you needed to do and who you needed to talk to. You’d know which hydrospanner to grab in order to fix the hyperdrive. That aesthetic of “simpler and more satisfying” worked its way into how we wrote and designed memos and news clippings.

To your second point, it turns out that maintaining distinct voices for characters like Ackbar, Poe, and Leia is easy when you’ve seen the movies a billion times. In the case of Leia and Ackbar, they actually showed up twice—once during the classic trilogy and again during the sequel trilogy—so I wanted their voices to change across the decades. 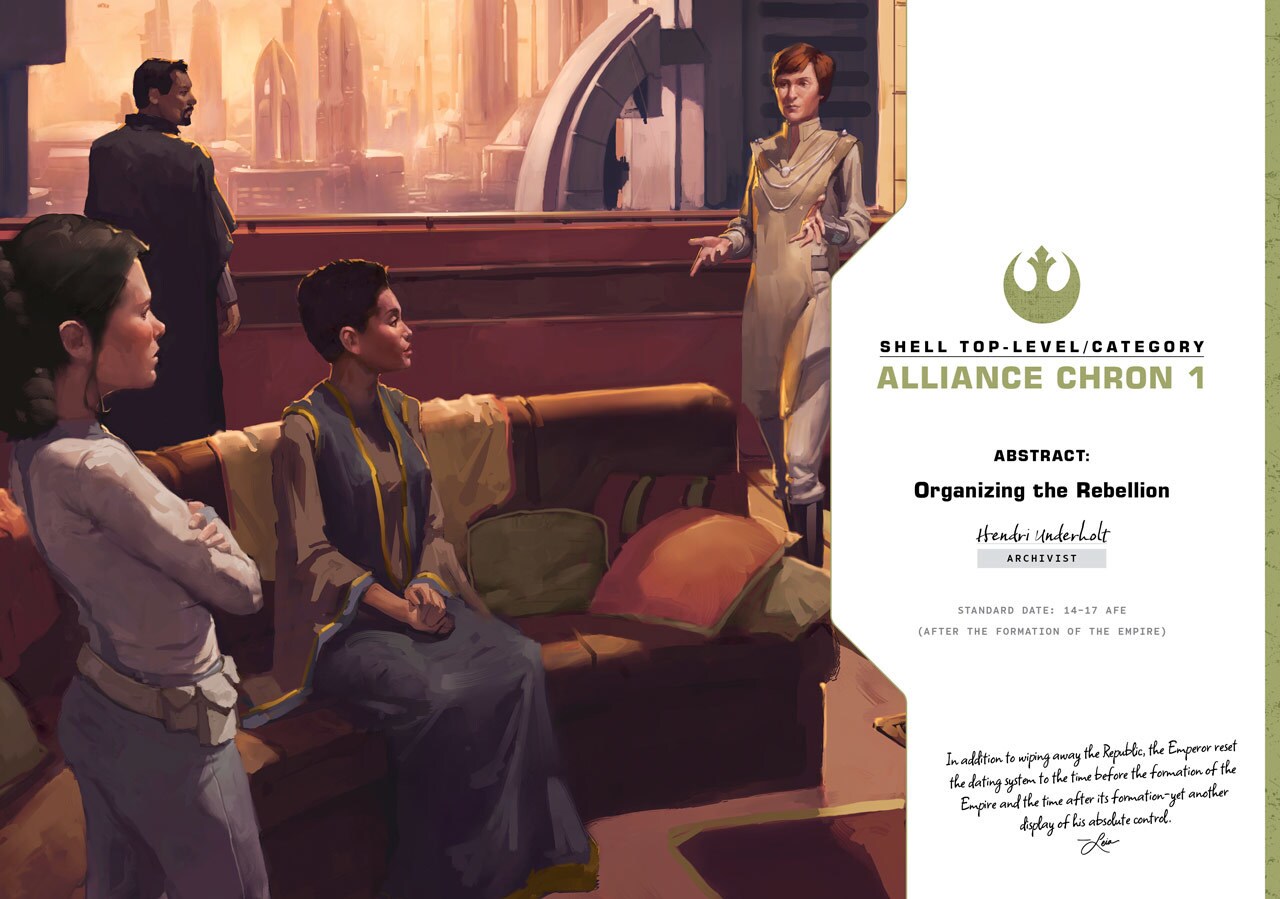 StarWars.com:  But at its core, this is really Mon Mothma's story, almost like a very official and confidential memory box of all the documents she thought would need to be preserved for the future. We get to see her dealing with the big picture as well as smaller incidents of rebels going rogue. But we also have a front-row seat to the strategic genius of the rebels as a whole and the minutiae of the operation. How did your own feelings about or understanding of the rebels change as you worked on the project?

Daniel Wallace: You nailed it, and I like your characterization of the book as a memory box. This is a repository of documents that Mon Mothma wants to preserve due to their future historical significance—or so she hopes. I kept thinking about the American Revolutionary War and the kinds of things that would be fascinating to see from that period. An attack plan for the Battle of Yorktown? Entries from Washington's journal? Early sketches by Betsy Ross for the U.S. flag?

Something that changed for me in my understanding of the Rebel Alliance was the depth of their desperation. The Battle of Hoth does a good job of establishing that the Rebels are in dire straits, but the expanded canon goes even further. The Alliance suffers additional defeats as it tries to take control of the Mid Rim in Alexander Freed's novel Twilight Company. By the time of the Battle of Endor, the Rebels have their backs to the wall. If this doesn't work, it's over. 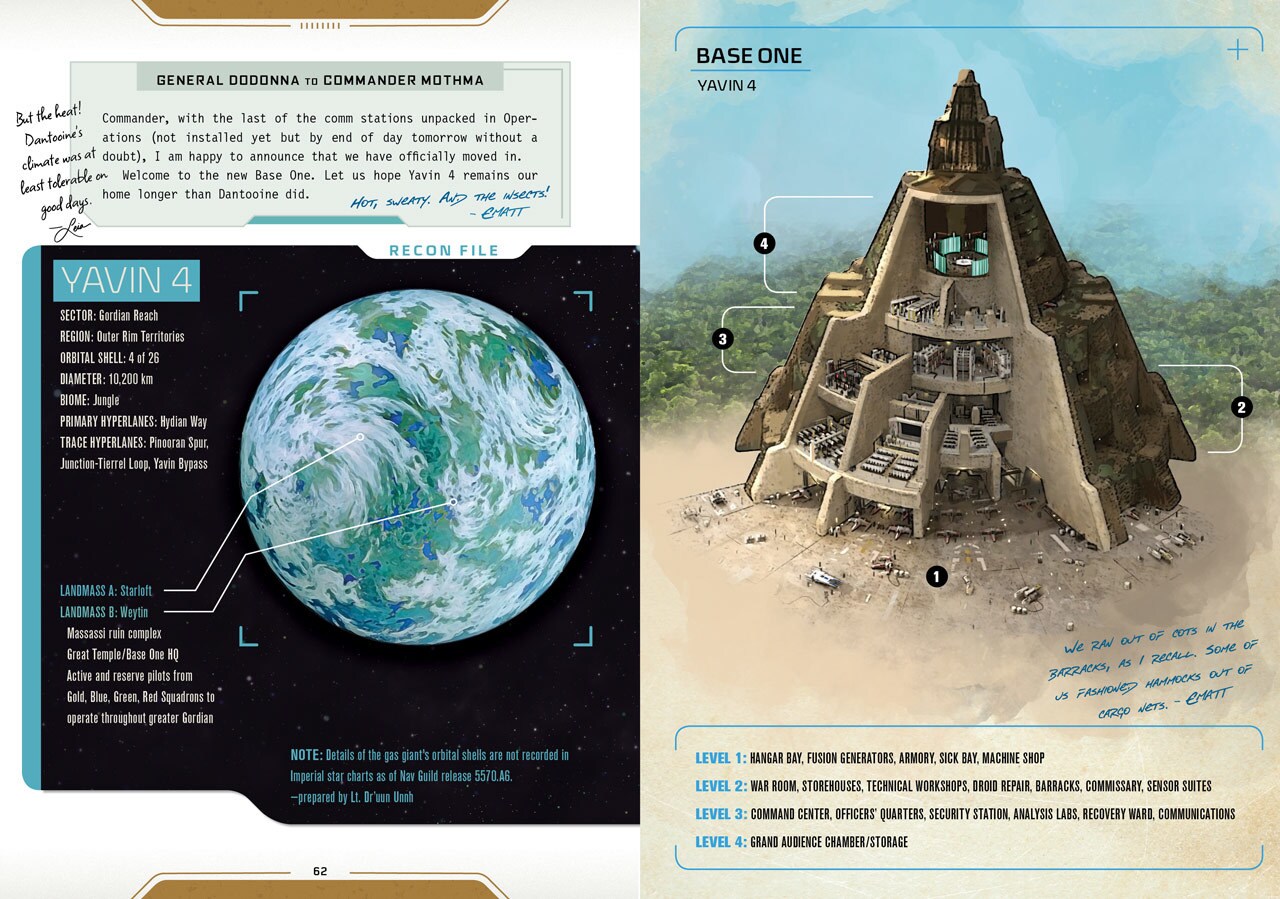 StarWars.com:  I enjoyed how the dossier hits on some essential pieces of in-universe history like the Battles of Yavin and Endor, and an overview map from Echo Base and more subtle references, like a memo on the evacuation of Crait, a page on Evaan Verlaine from the Marvel Princess Leia series, and a memo about the ill-fated Bothans agreeing to take part in an intelligence op. What are your favorite Easter eggs that you were able to include in the book?

Daniel Wallace: The Rebel Files is stuffed with Easter eggs, but I didn’t really think of them that way. There are plenty of references in the book to things established under the old Legends continuity, but my view is that the modern continuity is essentially a brand-new stage play using the previous play’s backdrops, costumes, and props. This opens up a massive toolbox stuffed with planets, aliens, weapons, droids, and starships for use. I’m convinced it makes the universe feel more fleshed out and lived-in when you can reference both Evaan Verlaine from the modern comics and Tac-Com Base from 1993’s Rebel Assault CD-ROM. 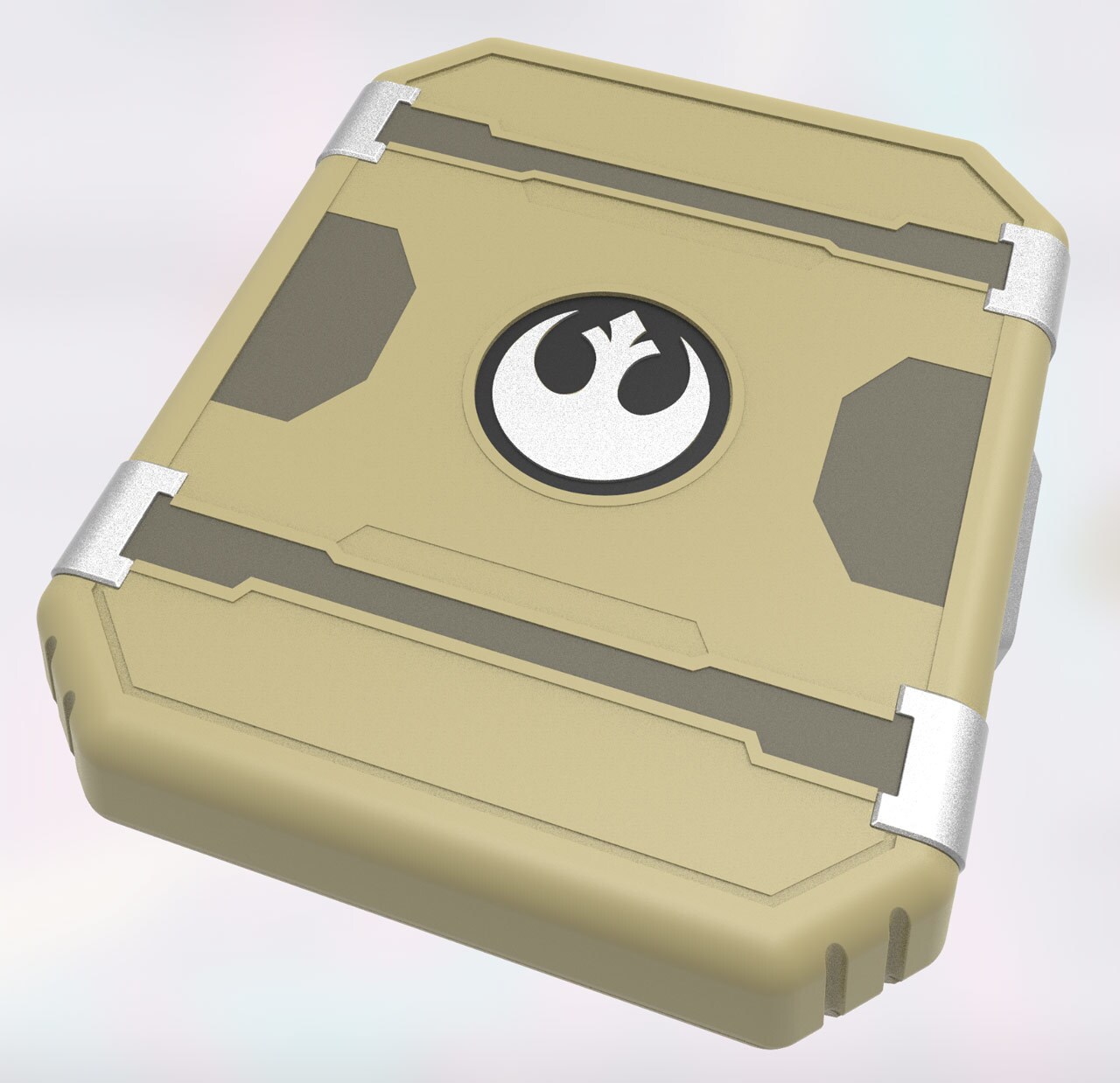 StarWars.com:  So much of Star Wars publishing is about beautifully bridging the spaces between what we've already seen on screen, giving the galaxy even more depth. And the many creators who get to play with and step into the universe leave their own mark. What personal touches did you incorporate into The Rebel Files to make it your own?

Daniel Wallace: Honestly, my aim with The Rebel Files was to make it feel like it wasn't written by a real person at all. That it was literally a collection of documents that fell onto our planet through a wormhole from the galaxy far, far away. I hope my author voice is minimal, if not invisible. My name isn't even on the cover!

StarWars.com:  This makes me wonder what an Imperial cache of confidential documents would reveal. Any chance you can tell us what you're working on now or hoping to write in the near future?

Daniel Wallace: Well, we did publish The Imperial Handbook several years back, but that was an Imperial primer distributed to newly-minted officers. I like your angle, though! I think there's a lot of good material to be mined from the rigid Imperial bureaucracy, in which everyone watches their backs and is terrified of failure.

What else lies in store for this book series? Some things I can't reveal, but I’m convinced there are some really fun corners of the Star Wars universe we have yet to explore.