At San Diego Comic-Con, I got to host a pair of panels this Star Wars Day that looked ahead into some of the publishing projects for the remainder of 2012 and into 2013. They revealed, among other things, that the chronicles of Vader’s fatherhood will continue, a pop-up acklay is a real showstopper, the classic heroes return to comics in all new adventures with an old school feel, and the Big Three return to a landmark novel that could perhaps be called postapocalyptic (see what I did there?) …

Vader’s Little Princess. First up today was a panel titled “A Quirky Point of View.” While the Expanded Universe stories tend to get the lion’s share of online fan discussion, there’s a whole ‘nother class of Star Wars book that have proven to be phenomenal successes, charting on the bestseller lists for many weeks at a time. These are the books that seek to capture the joy and creativity of Star Wars in new and unique ways. This past May saw a smash hit in Jeffrey Brown’s Darth Vader and Son from Chronicle Books, which asked the question “What if Darth Vader was a good dad to his four-year-old son, Luke?” In today’s panel, Jeffrey revealed there is a follow up in the works that looks at Vader raising a teenage Leia in Vader’s Little Princess. Details are still to come as to timing, but with Jeffrey slated to appear at Celebration VI, I’m certain those heading to Orlando in August will find out more.

Star Wars: A Galactic Pop-Up Adventure. Paper-engineering genius Matthew Reinhart took fans on a behind-the-scenes tour of the making of the follow-up to his astounding 2007 pop-up book. This new volume will focus on characters and events of the prequel trilogy – including The Clone Wars – and include such intricate pop-ups as a mighty acklay creature, a four-armed General Grievous, an assortment of Jedi heroes (with Ahsoka standing proudly among them) and a standout Anakin Skywalker that transforms into Darth Vader, complete with an electronic light-up lightsaber that turns from blue to red to show his dark change of allegiance. Matthew made mention of a limited edition which will feature more Clone Wars fold-outs, and he too will be at Celebration VI, for which he is planning a special pop-up. 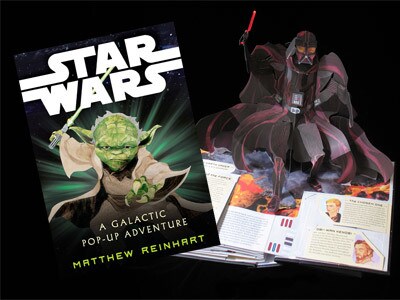 Darth Maul: Death Sentence. In a panel later in the day, editors Randy Stradley and Dave Marshall of Dark Horse Comics discussed some upcoming series. Later this month is Darth Maul: Death Sentence, a four-issue mini-series that bridges the gap between Seasons 4 and 5 of The Clone Wars, tracking the scourge of the resurrected Maul and his brother Savage Opress.  “They discover that they’ve killed someone close to a powerful man, and he’s put a price on their head,” said Randy. “They decide the best way to remove that price on their head is to go kill him and his army. Mayhem ensues.” The series is written by Tom Taylor, with art by Bruno Redondo. It starts later this month.

Lost Tribe of the Sith: Spiral. The popular e-book series by John Jackson Miller is expanded with an all new five-issue comics series starting next month.  “One of the really cool things about it is that it takes place on a planet where, due to the raw materials they can work with, there isn’t much technology,” said Jennifer Heddle, editor at LucasBooks. “It’s really awesome to see these Sith on this very, almost-steampunk looking world. It’s a very new milieu for Star Wars. It’s very exciting.”

Agent of the Empire. The Imperial spy series returns in October, and this time writer John Ostrander is joined by artist Davidé Fabbri. “I don’t want to give too much away, but Leia makes an appearance or two,” said Randy. “Boba Fett makes an appearance. It has to do with the assassination of Count Dooku. I’ll let you ponder that.”

Dawn of the Jedi: Prisoner of Bogan. The comics series that goes back to the ancient era of the primordial Jedi Knights continues where the last series left off. “It’s a coming of age story with massive Force powers,” said Randy. “This one will get off of Tython and we will actually see most of the other planets in the Tython system by the time the story is ended.” 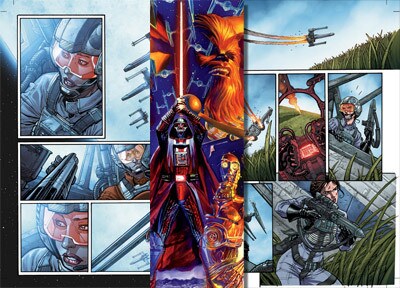 Star Wars. The splashiest Star Wars comics announcement this convention was for a series that goes back to the classic roots of Star Wars, with a title that is simply that: Star Wars. Written by Brian Wood with art by Carlos D’Anda (and covers by Alex Ross!), the comics star Luke, Han, Leia and Chewie in the days after the first Death Star’s destruction. “It’s going to be completely casual reader-friendly,” said Randy. “We’re not going to bog people down with dense continuity. If you’ve only ever seen the movies, you know everything you need to come into this series.”

The series starts in January, and seeks to capture the fun and camaraderie of that early original trilogy, but also delving in to the drama of the characters – Leia, after all, is still dealing with the destruction of Alderaan, and young farmboy Luke suddenly finds himself bandied about as a great Rebel hero.

“This is going to be the series that if you have friends who you’ve been trying to get to read Star Wars books but they’re a little intimidated because there’s so much out there, hand them this and say this is the kind of storytelling that Dark Horse is doing,” said Jennifer. “They’re totally going to get sucked in by it and then you can lead them to all the other great series that we do.” 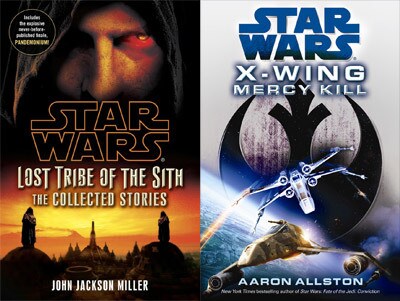 Lost Tribe of the Sith: The Collected Stories. Del Rey Books offered a look at what’s next, starting with this anthology of the previously released e-book series by John Jackson Miller, that’s capped by an all-new novella length tale, Pandemonium. Its due out July 24.

X-Wing: Mercy Kill. Aaron Allston returns to Wraith Squadron adventures in a story set after the Fate of the Jedi series. “A new generation of Wraiths and some old favorites rally together for one big final mission,” said Del Rey editor Frank Parisi. “Or maybe not final, if a lot of you guys buy it.” It will be out August 7.

The Essential Reader’s Companion. “The intent of this book is to summarize every prose Star Wars story that’s been published,” said author Pablo Hidalgo, who would later that night write a blog post about the panel and weirdly refer to himself in the third person. Editor Erich Schoeneweiss revealed the book boasts over 100 new illustrations depicting scenes from the novels, as well as about 50 character portraits. It’s due out on October 2. 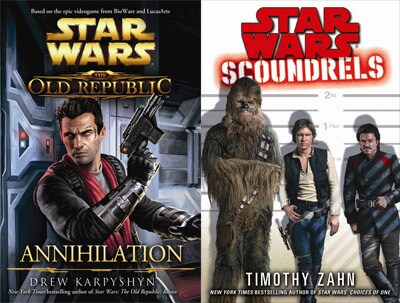 The Old Republic: Annihilation. Drew Karpyshyn returns with this hardcover due out on November 13. “It’s a different kind of book for Drew,” said Frank. “It has Jedi and Sith in it, but it doesn’t focus on them. It’s more of an action, fast-paced, espionage spy technothriller.”

Scoundrels. By the sound of the applause in the room, this book by Timothy Zahn might be the most anticipated of the year. Due out on December 26, it features Han Solo putting together an all-star team of con-artists, thieves and saboteurs to pull off a heist to steal from a major crime lord. “You get to see Han as a criminal mastermind,” said Frank “Lando is at his smoothest and sleaziest best. He’s awesome in this book. It’s a great gateway book like the new Star Wars comic book series.”

The Last Jedi: Michael Reaves and Maya Kaathryn Bohnhoff return to collaborate on this standalone adventure set in the “dark times” era between Episodes III and IV. It stars Jax Pavan and I-Five from the Coruscant Nights series. 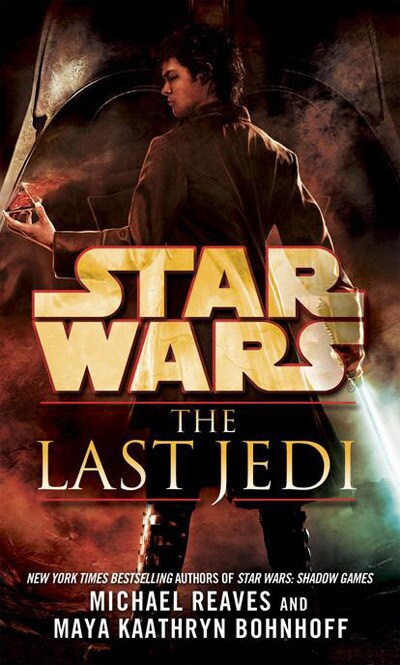 Dawn of the Jedi: Into the Void. Del Rey plunges into the deep, ancient past of the Force with a new novel featuring a new author, Tim Lebbon. “He’s been corresponding with John Ostrander and Jan Duursema,” said Frank. “It takes place concurrent to the Force Storm story from the comics series, but tells its own story and shows things not seen in the comics.”

Crucible. Author Troy Denning revealed his standalone hardcover that puts Leia, Luke and Han back in the focus of things in the post-Fate of the Jedi galaxy. “It’s a standalone novel that will start a year after Apocalypse,” said Troy, “It will feature the big three (and Lando) with no grandkids along. It takes place in a new part of the galaxy… well, it’s new to readers, but isn’t new to the characters.” The Jedi, understandably, have a lot to worry about after the defeat of Abeloth and the return of the Sith, but there’s a new threat in the galaxy that only heroes like Leia, Luke and Han can face. “There are some new villains,” said Troy. “They have connection that goes way back to my days at West End Games. One’s mother knew Han from way back then.” Hmmm… time to crack open those old Solitaire Adventures that Troy wrote back in 1990, it would seem.

Jennifer Heddle described the book as a landmark event for the trio that would forever change them. 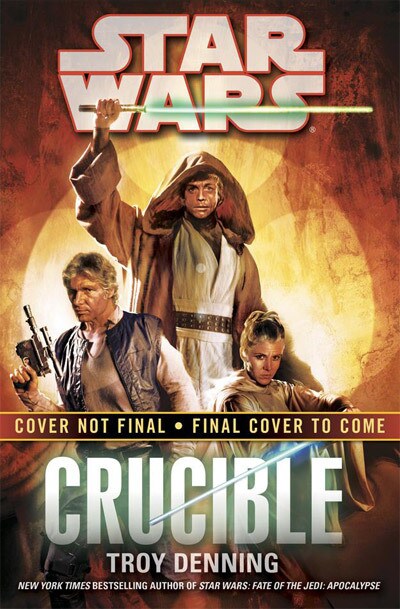 All the panelists here at Comic-Con will be at Celebration VI, where they will no doubt reveal more details about these titles – as well as announce even more works coming in the future.

Pablo Hidalgo is paid to know the difference between Romba and Lumat and dies a little bit inside when you misspell Wookiee or Lucasfilm. He lives in San Franicsco.