My Favorite Scene: An Old Man, a Young Man, and Two Droids Walk Into a Bar

The head writer of Mystery Science Theater 3000 discusses why the Mos Eisley cantina sequence, filled with weirdos and strange aliens, is a cinematic gem.

On The Flop House, podcast I've been known to refer to Star Wars as a movie about an old man and a young man who go to a bar. Maybe that's because for me the heart of the film is in that magical minute and a half from when the triangle-headed alien pops up from the bottom of the screen to when Momaw Nadon butts in looking like a big wooden flatworm who just got terrible news. Don’t get me wrong, I’ve always thrilled at the TIE fighter battles, been chilled by Darth Vader and Grand Moff Tarkin, and swooned over Leia and Han’s banter. But as far as I’m concerned, if a stranger stops me on the street and yells “Star Wars!” in my face, the first place my mind takes me is the Mos Eisley cantina.

Why is my favorite scene in the film, nay the entire seven (or eight, counting Rogue One) movie series, a short little snippet of random creature effects that barely features our main characters and does little to advance the plot? Well, first of all, I could easily watch three straight hours of random aliens popping into frame, kicking back, and having drinks. But in a more respectable sense, Star Wars is about surprising us with things we’ve never seen before, and no scene is more packed with surprises than our first sight of the cantina.

I used to do a stand-up routine about how the cantina scene had ruined me for real life bars, because no real life bar was full of crazy creatures and bizarro aliens. But the amazing thing about the cantina scene is that the illusion is so strong, despite being so easy to see through. This is clearly a hastily thrown-together collection of pre-existing alien masks and monster make-up (Exhibit A: the werewolf; Exhibit B: the devil guy) cut up by quick edits to hide the cheapness of the whole thing. And yet, that same thrown-togetherness works. It doesn’t feel like an elaborately choreographed set-piece. It feels like a bunch of aliens lounging around and hanging out.

And that’s the most revolutionary thing about it. When before had I ever seen aliens just HANGING OUT? Laughing together, being grumpy in the corner, smoking waterpipes, bopping to music just strange enough to sound alien but still catchy as hell. For a "lived-in" universe that gives us very few actual details of everyday life (what do these thousands of races do for fun other than hear live music, play hologram monster chess, and podrace?), the cantina scene works wonders in bringing a sense of actual existence to the Star Wars experience.

I’d go as far as to say this is the most beautifully cinematic scene in the series. For me, at least. The most basic building blocks of cinema are the use of editing to juxtapose images (which this scene does beautifully, like an outer space Man With a Movie Camera), and the image of a face we can project our emotions onto. On a purely technical level, the cantina scene is a parade of faces, or to be more precise, masks. We can project whatever emotions we want onto them, and we do. Every face makes us ask the question every scene of every movie wants us to ask: “Who’s that? What’s their story?” Luke and Obi-Wan could have hired any of those spacers and we would have gotten a very different, though still awesome, movie.

It’s so powerful there’s even a whole book of short stories, Tales from the Mos Eisley Cantina, about characters who aren’t even characters but mobile set dressing. Now the Cantina book isn’t particularly satisfying to me, but it never could be. The scene raises dozens of questions that were never meant to be answered. They exist to be mysteries. Intriguing glimpses of other worlds and cultures and species and stories. And maybe that’s why I like this scene so much. Because it packs more potential stories into 90 seconds than I’ve ever seen before or since. Just like the first time you ever went to a real bar, there’s a sense that a new realm of experiences is opening up to you. 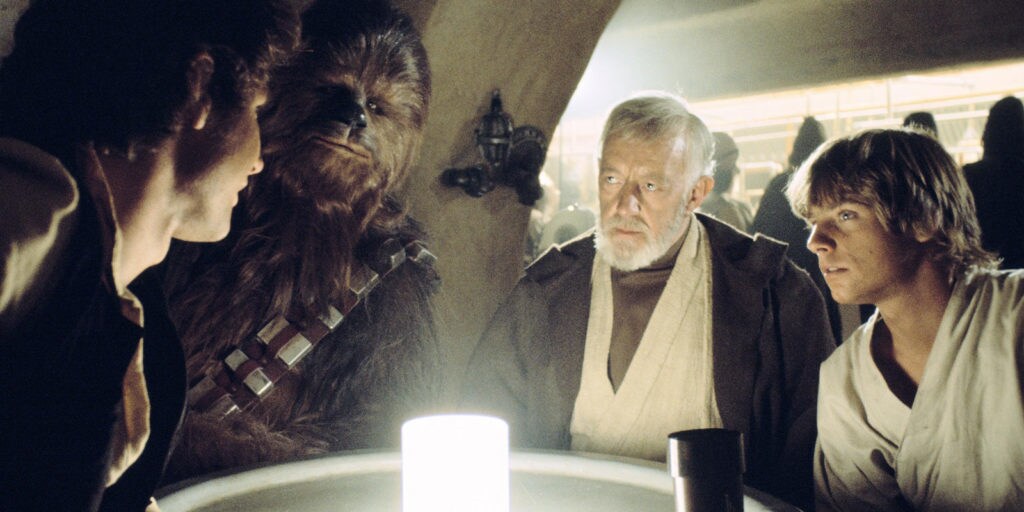 Now multiply that by the size of an infinite universe of creatures to meet and fight and love, far more than you’d ever dreamed of back when you were fixing moisture vaporators on the farm. You’re about to take your first step into the boundless cosmos of unlimited possibility, and no matter what happens to you, you’ll never be the same.

And of course, the music rocks.

Elliott Kalan is the head writer for Mystery Science Theater 3000, co-host of the Audible series Presidents Are People Too!, co-host of The Flop House podcast, and former head writer for The Daily Show with Jon Stewart, where he won four Emmy Awards. He also wrote the Marvel series Spider-Man and the X-Men. As an adolescent he collected anything with Boba Fett on it -- ANYTHING.

Celebrate a Classic Cantina Patron with These Muftak Macaroons