Much to Learn You Still Have: 8 Things You Might Not Know About Geonosians

Get a crash course in the insectoid designers of the Death Star!

The creepy, winged aliens known as Geonosians may seem like lowly bugs, but they actually played an important part in the galaxy’s history, from the fall of the Separatists to the rise of the Empire. Think you know more about them than the average Star Wars fan? Read up and find out!

1. They couldn't get the Death Star quite right.

In Rogue One, when Director Orson Krennic approaches Galen Erso for his assistance with the Death Star, there is no blatant mention of the Geonosians. However, if you’ve given James Luceno’s Catalyst a read, you’re privy to some extra details about the weapon’s construction. Apparently, the airborne aliens were responsible for designing the Death Star, but they didn’t account for how it would actually fire. When the Battle of Geonosis erupted, they hadn’t quite gotten it right just yet. Due to their incompetence, Krennic called upon Galen Erso to figure out the last piece -- how to get enough power to fire a weapon of that magnitude. Erso joined the initiative with his vast knowledge of kyber crystals and the rest is history. Maybe things would have turned out a bit differently if the Geonosians actually designed the weapon to properly function.

2. They were inspired by an infestation.

Take a look at the body of a Geonosian and it’s no secret that they were inspired from insects -- termites, to be exact. While coming up with the concept art for the winged warriors, George Lucas was also fighting a battle of his own. His house was infested with termites, and he wasted no time gathering up some specimens to show to his concept artists. The towering spires we see peppered through the landscape of Geonosis was a nod to the termite mounds of Africa. The background shots were actually made by a combination of still photography from the American Southwest, matte paintings, and miniature models. According to Doug Chiang, George Lucas originally wanted the species to take on a chameleon-like quality and change colors based on their surroundings. That idea eventually got nixed, but the color and texture of the Geonosians does match that of their homeworld.

Fun fact #1: The head design of the Geonosians was actually taken from unused original concept art for the Neimoidians before they were to be played by masked actors.

3. They don’t value life much.

The Geonosian arena where Obi-Wan, Anakin, and Padmé were brought to be executed has a long history of bloodshed. Properly known as Petranaki Arena, the stadium was constructed by cutting the top of a butte and hollowing its interior. The arena wasn’t only a place for prisoners, but also the location of nasty battles between Geonosians of all caste levels. The battles were a way for citizens to prove they were filed in the correct caste, and in turn gave residents a bloody spectacle to occupy their time. Geonosians place little value on life, and watching their fellow flying fighters was not only amusing but also respectable. The bugs like battling so much that it became an issue while they were building the Death Star. So many drones were attacking each other over who got to do what work that Director Krennic needed to consult Archduke Poggle the Lesser. Poggle didn’t care too much. Geonosians will be Geonosians... 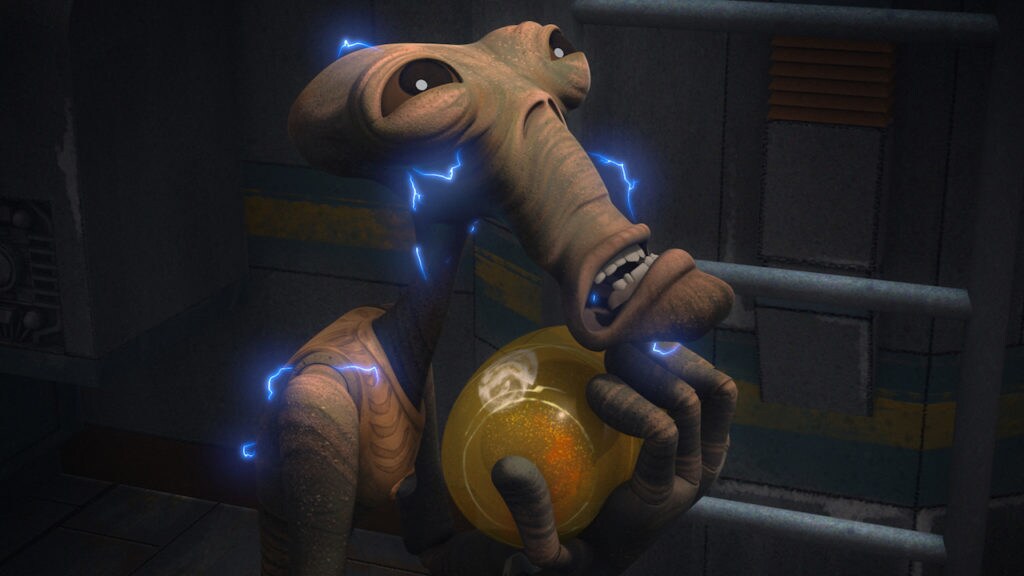 In the Star Wars Rebels episode "Ghosts of Geonosis," we finally got a glimpse of post-The Clone Wars Saw Gerrera, but more importantly, we met Klik-Klak! Klik-Klak is a skittish Geonosian that tries to protect a Queen egg from getting destroyed by the violent and jaded Gerrera. Though Geonosians may seem indifferent to the suffering of their kind, when it comes to the survival of their species as a whole, they finally show some compassion. The character of Klik-Klak was created to show that a sympathetic Geonosian was possible. The production team looked to the sci-fi film District 9 as inspiration. In both the movie and the episode we see a frightening and unappealing creature seem surprisingly sweet due to circumstance.

A day out at the Petranaki Arena isn’t all about the carnage --a Geonosian’s gotta eat, too! While watching two drones go at it, you can grab a lightly grilled arch grub. Arch grubs are insects native to Geonosis, and though there haven’t been any canonical portrayals of them, they are definitely a popular meal during the Geonosian holiday of Meckgin, a day to celebrate the planet's devotion to industry. The smell of the grilling grubs makes the arena pretty potent for non-Geonosians like Orson Krennic who took in a day at Petranaki while working with Poggle the Lesser on the Death Star project. Planning a trip to the dusty red planet but not into grubs? Feel free to nibble on the edible fungus growing in the deep underground caves. Warning: they may or may not create a euphoric effect when consumed. Have fun!

6. Their sound actually comes from nature.

The interesting dialogue of clicks and clacks that made Geonosians either irritating or fascinating, depending who you ask, actually came from real animals. The language known as “Geonosian hive-mind” came from two sounds recorded by Matthew Wood under the direction of Ben Burtt while in Australia shooting the prequels. First in Melbourne, a group of penguins at a reserve were recorded during their mating season. Later, Wood headed to Cairns, where a group of fruit bats fighting over a banana did the trick. Burtt took both of these calls and mixed them into what would become the final mother tongue of the insectoids. Orson Krennic is one of probably few humans who can both understand and speak Geonosian -- though not so well, according to Poggle the Lesser.

7. They have a caste system.

All Geonosians may be creepy and pest-like, but they certainly are not all created equal. Their society is broken up into different castes, starting at the top with the Queen, who is responsible for laying the eggs for her entire hive! Below the Queen you'll find the public leaders like Poggle the Lesser, who take orders from the crown. The lowest of the caste is made up of the worker and soldier drones, bred mostly to be disposable. These are the menial laborers responsible for constructing the Death Star, working in the droid factory, or going to war. Factory safety regulations are very loose, proving that the lives of the lower class aren't a concern for the top tier of Geonosians. If you do want to change your status in society, you can always take up arms in the arena to prove your worth.

If you take anything from this article, let it be from two of the COOLEST episodes of The Clone Wars to ever air. I’m talking about brain worms. Ever heard of them?  They’re slithering, psyche-controlling creatures that Queen Karina the Great used to bring dead Geonosian warriors back to life. The zombies were defeated by the Jedi, but that didn’t stop a worm from hitching a ride on the medical frigate and infecting clone trooper Scythe and the Jedi Barriss Offee. Moral of the story? Don’t get on the Queen’s bad side. But if you do, try blinding her with a flashlight.

Fun Fact #3: Geonosians are known to be xenophobes, and don’t take kindly to outsiders that impede on their territory. They hold too many secrets that could be discovered and exploited.

That’s a hefty dose of Geonosian facts, but I’m sure you can think of even more! Let me know what I forgot in the comments below.

Aliens Much to Learn You Still Have Geonosians Lists