Lucas Books' senior editor discusses why the first Star Wars comics are better than you might think! 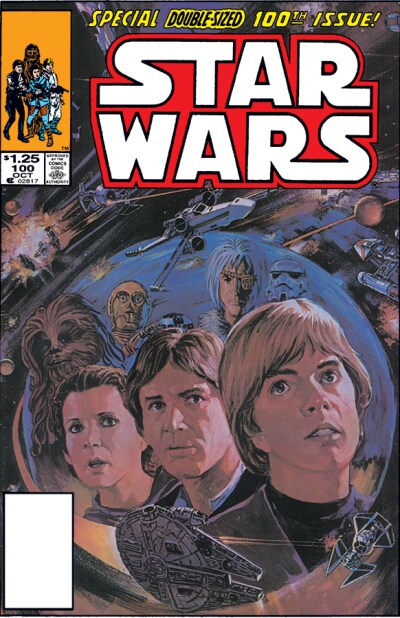 When I started this job, one of the first books I came across -- and I was very excited about this -- was a Dark Horse omnibus of a bunch of the old Marvel Star Wars comics. Come to mama, I thought gleefully as I stuck an extra copy in my bag to take home.

I suspect a lot of people would be surprised by this reaction. I know that those comic books do not have the greatest reputation among fans. But I unapologetically love them.

Only part of it is nostalgia. Yes, for a long time they were the only Star Wars fiction I could read, period, aside from my well-worn novelizations, Splinter of the Mind’s Eye, and the Brian Daley novels. When I discovered the comic books in a magazine shop, sometime between The Empire Strikes Back and Return of the Jedi, it was a revelation. I eagerly devoured every issue I could find. And I was convinced that eventually there would be an issue where they would find Han Solo and rescue him from Boba Fett! Ah, the innocence of youth.

But it’s not just fond memories that make me a defender of those 107 issues. There was some meaty stuff in there, especially from a character perspective. As a Princess Leia fan, I loved that the comics actually took the time to explore her feelings about Alderaan being destroyed -- I’ll never forget this one gorgeous full-page shot of her sitting in a chair, pensively thinking about her former planet. (I looked it up; it’s the first page of #53, “The Last Gift from Alderaan.”) Or the issue after Return of the Jedi (#81) where Han finds himself out of sorts and out of place and actually deals with the fact that he was frozen in carbonite for years, which was just what I wanted to read as a fan of that character.

There were great original characters, too. The Marvel comics gave us Fenn Shysa, a legitimate rival for poor frozen Han’s affections, and our first hint that Boba Fett was not the only one who wore that cool armor. There was Shira Brie, the spirited redhead in the Rebel Alliance who shared a bond with Luke but turned out to be an Imperial spy, and then resurfaced later as the vengeful Lumiya (who resurfaced again, even later, in the Legacy of the Force book series). There were the Nagai, truly chilling villains, an alien race that provided an opportunity to examine what it means to be human.

And there were Zeltrons! You guys, I love Zeltrons. Yes, early on I seem to remember an overemphasis on their being hypersexual, but the idea of a species that’s primarily interested in having a good time is just a fun idea, and I loved the way free-spirited Dani served as a counterpoint to Leia’s restraint (and later matured as a character, finding love with the Iskalonian hero, Kiro). And the mini-storyline with Leia’s young male Zeltron attaches near the end of the Marvel run is one of the funniest bits in Star Wars fiction, to me. They provided a dose of unabashed humor, and that’s such a crucial element to me of what Star Wars is all about.

Sure, everyone likes to single out Jaxxon, the giant green bunny rabbit from the earliest days of the comics, but I try not to hold against anyone what they did in the 1970s. Within those comic book pages there’s plenty of action, and drama, and pathos, and exuberance, to be found. Writers like Archie Goodwin, David Micheline, and Jo Duffy tackled years of stories to spin between and after the films, and delivered both sweeping action-packed storylines and smaller character moments that stick with me all these years later.

So consider picking up one of the collections Dark Horse has put out (under the titles “A Long Time Ago…”). You may just be surprised by what you find there.