Inside the Lucasfilm Archive: The Jedi Texts

Time it is. To stop looking past this pile of old books.

There’s a feeling of reverence surrounding the ancient Jedi texts. Secreted away on Ahch-To in a sacred place built a thousand generations ago to keep the knowledge of the Jedi Order safe for future disciples, the venerable tomes represent the last remnants of the Jedi religion, the last echoes of wisdom from an order on the verge of extinction. 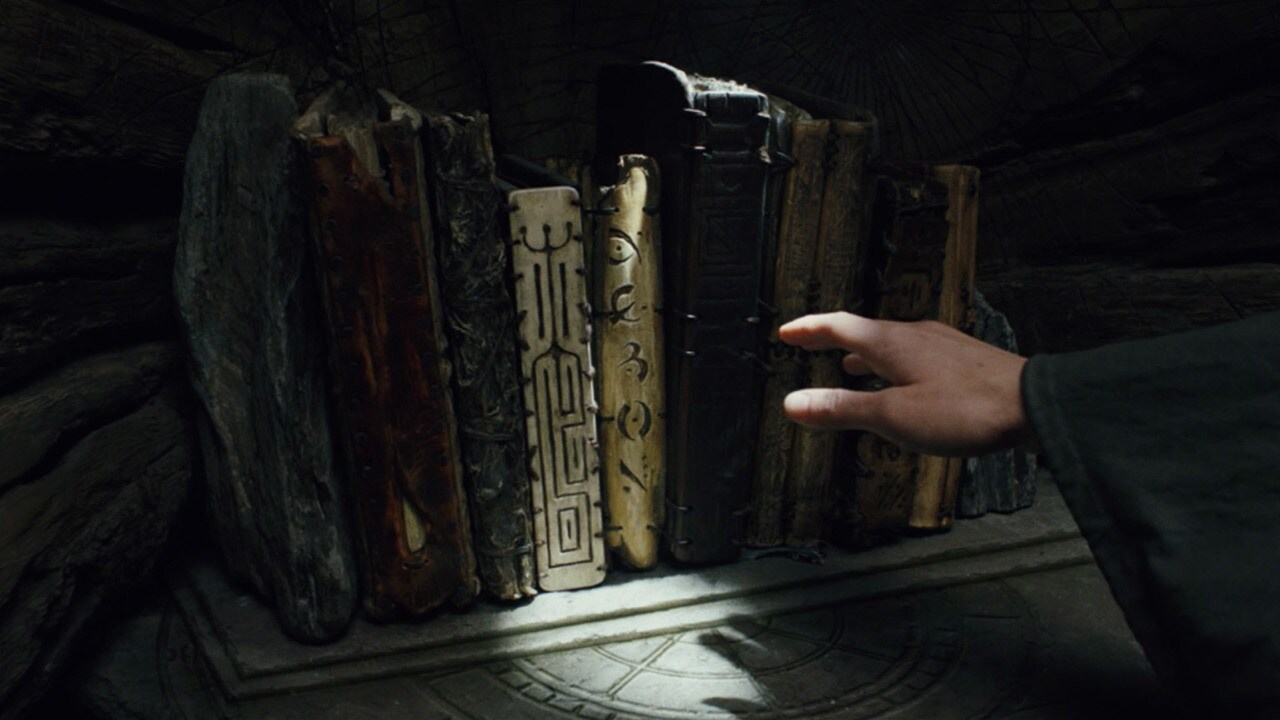 In-world, the library is a symbol of Luke Skywalker’s lost faith -- in himself, the Force, and the teachings of his masters, -- realized as simple, incendiary paper volumes that he tries but fails to torch in Star Wars: The Last Jedi. Printed books are a rare find in a modern galaxy that prefers datapads and holograms as primary forms of communication. But stashed away in a drawer aboard the Millennium Falcon, the scriptures survive for another day in Rey’s care.

To create the hero Jedi Order book, pulled from the petite row and opened to reveal the Jedi emblem for mere seconds on screen, prop makers and artisans designed and printed painstakingly detailed vellum-like sheets then bound them in the cast of a hand-carved cover.

The final effect is mesmerizing in person. “This is a pretty prized piece,” says Lucasfilm Archivist Madlyn Burkert. Beyond that first page are a host of individual pages, designed and lettered as if they truly held the knowledge of those first Jedi practitioners. There’s incredible attention to detail on each page, layers of gold leaf mixed with blue pigments and an unidentified script, perhaps inspired but some of the earliest scrolls and scribbles from our own human history. 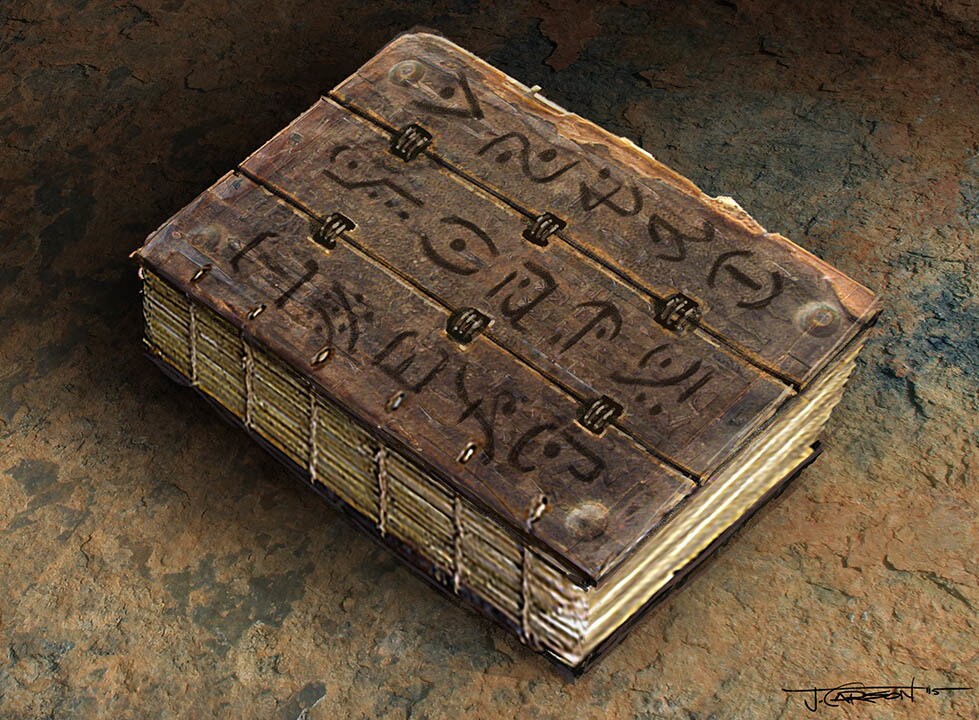 Originally, the props team conceptualized about 40 different volumes, of varying sizes and finishes, which director Rian Johnson narrowed down to a slim 10 finalists for the sacred shelf.

Burkert says the prop makers were given free rein with their own personal inspiration, provided that the final series looked like a set of ancient volumes when they were finished. As part of the process, the team researched old book-binding methods, so that each book would be unique in its fabrication.

For the hero book, the only volume that gets pulled from the stacks and cracked open on-screen, Burkert says the prop makers created the cover by hand, with lettering cut from leather and applied to the front before being covered in layers of vellum-type paper for texture. Then the entire thing was cast and molded from resin before being tied back together. “For the cover, there’s leather strapping that holds it together,” Burkert says.

Meanwhile, Lucasfilm’s graphics department created about 80 unique interior pages on handmade paper, taking great care beyond the single page glimpsed in the film. Look closely and you can see the way the ream of paper has some give beneath Luke’s gloved hand.

To complete the work, the props department aged and weathered the pages, rebound the book, and added the gold leaf accents. According to Propmaker Martyn Doust, it took the props team two weeks to complete a single volume from start to finish. 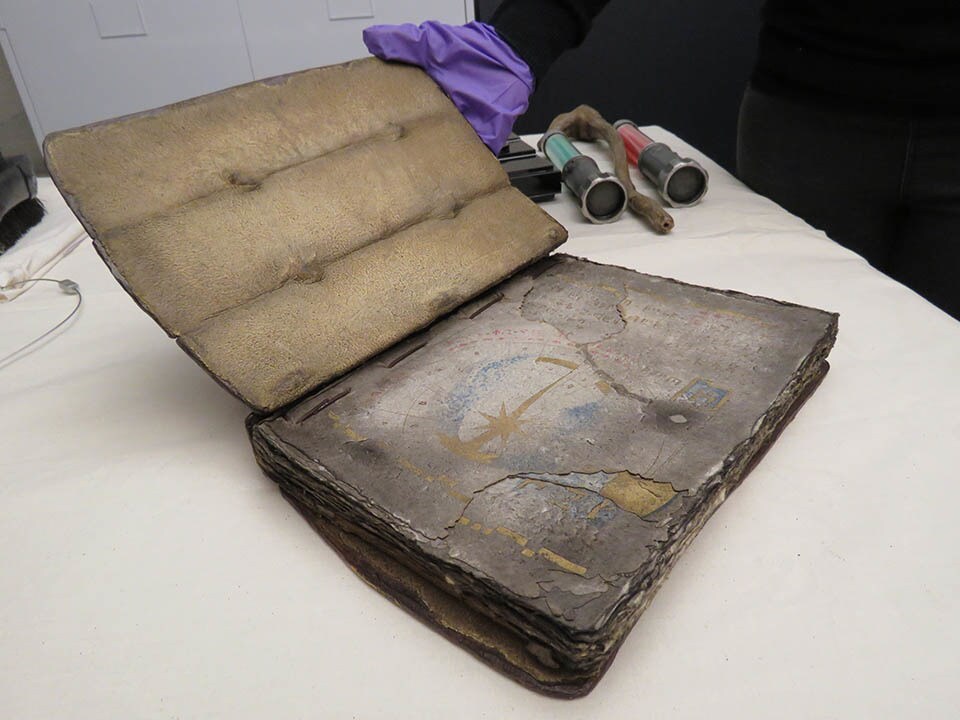 The finished prop volume has a substantial weight to it, although the bindings make it difficult to flip through like a contemporary printed text. It’s now kept sequestered in a special slip cover and carefully boxed away in the Lucasfilm Archives, a testament to the precision of the prop makers who imbued such an important piece of Jedi history with its own awe-inspiring mystique.