Learn how some fans celebrate the power of the Force around the holidays.

In Fully Operational Fandom, StarWars.com goes right to the heart of the Star Wars saga -- the fans -- for insight into their thoughts and experiences surrounding a galaxy far, far away.

'Tis the season and Star Wars fans have already received the best possible gift thanks to the release of Rogue One. But as the holiday and the end of the year approaches, it's only natural to turn towards the past. I asked fans about their memories of holidays of yore that have ties to Star Wars and received answers that will make you smile from ear to ear. 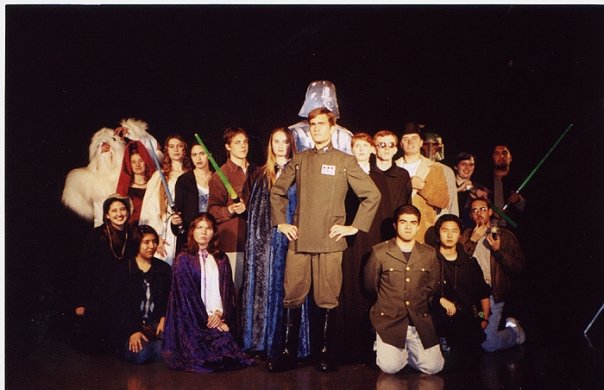 Joi Weaver tells me about her college Star Wars club: "Just before Christmas break every year, we would gather for a 'White Bantha' gift exchange and an attempt to watch all of the Holiday Special. I'm still friends with almost everyone from the club, and those are some of my happiest memories." After graduation, they occasionally gathered for Life Day parties. 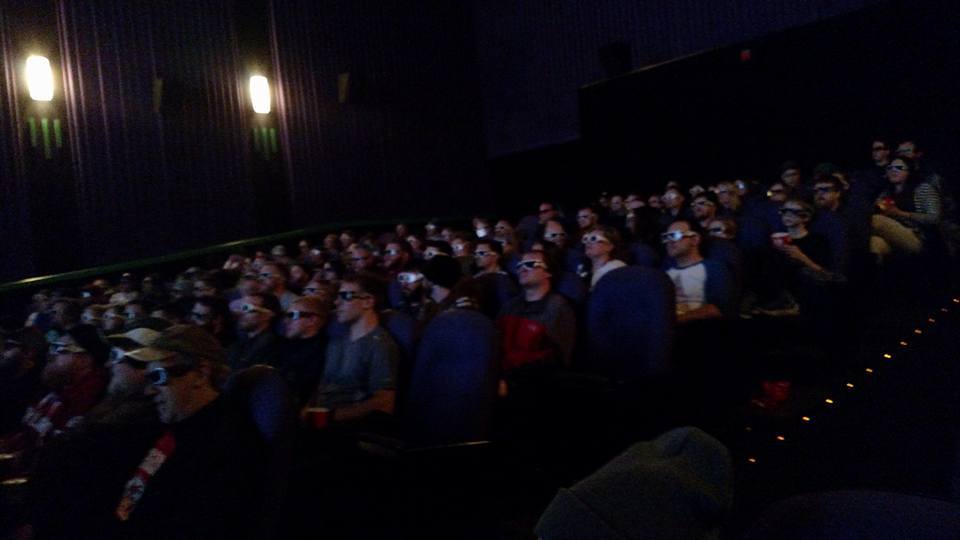 How would you like if your company put together an outing for everyone to see the latest Star Wars movie together? That's what happened to Devin last year. He says, "During a company meeting, the CEO of our company was going over a list of company goals and blindsided us with one of them being a company field trip to go see Star Wars [The Force Awakens] in 3D! Since we’re a company of nerds (understatement of the century), we all erupted in cheers. It was the coolest thing! We all got Star Wars-themed treat bags and some of us even went to the theater in full costume. We went on opening day, December 18, which is right around when a lot of people were taking breaks for the holidays, so it was a nice team outing to close out the year." And the tradition continued...Devin and his company all went to see Rogue One on opening night.

My company is just myself and my cat -- do you think they'd let her into a screening? 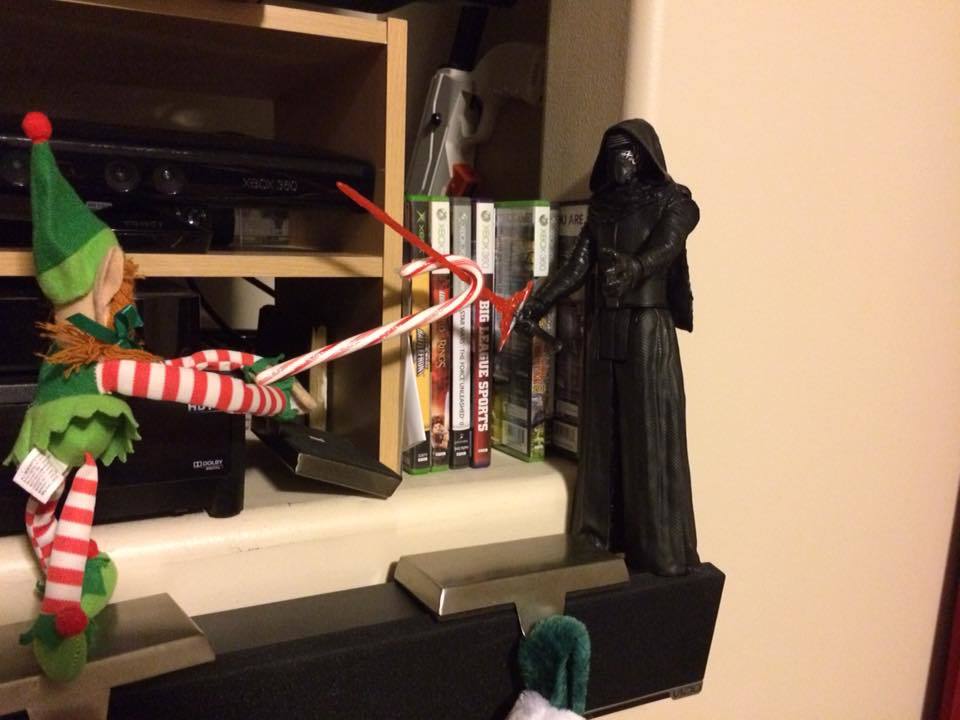 Daniel gets in on the Star Wars holiday fun with his children. "Because of December theater releases, my kids know how much I'm into Star Wars at Christmas. I hide the Elf on the Shelf around the house and had our Elf fight Kylo Ren, or I display him with Star Wars LEGO and the cup from seeing The Force Awakens in the theaters. I took my grandfather to The Force Awakens last year and will be taking him to Rogue One for an early Christmas present this year. We have plans to see each Star Wars in December as long as it continues." 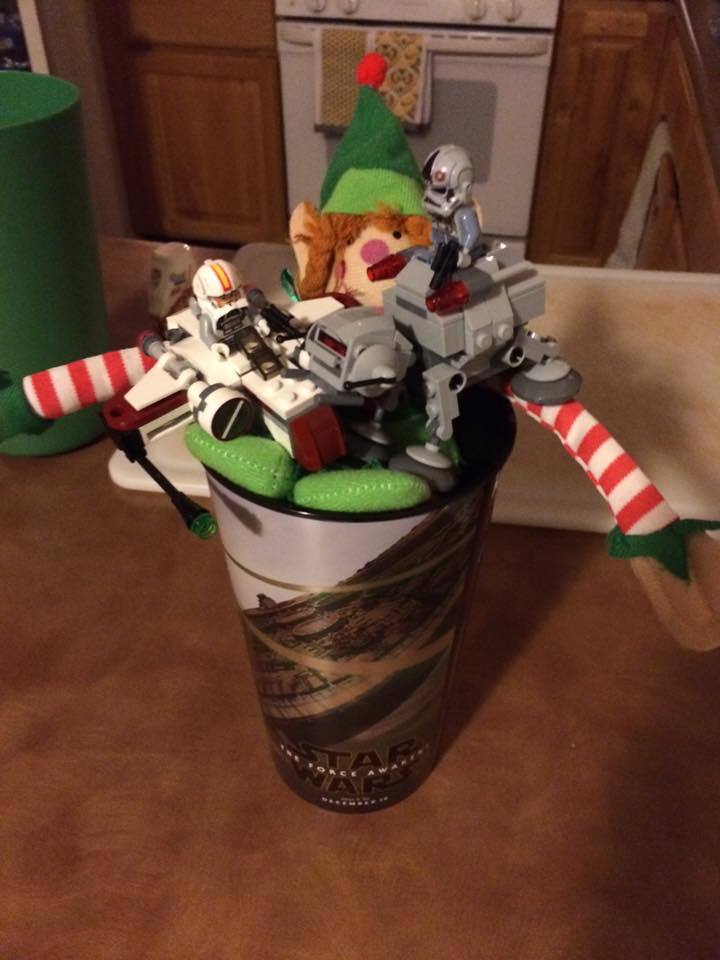 Going further back than The Force Awakens, Kim remembers playing with the Star Wars toys her brother received for Christmas. She says having a little brother gave her a peculiar benefit: "It would be decades before marketing to girls advanced past Barbie dolls, but in my brother’s world, I had access to the good stuff. Don’t get me wrong, I enjoyed freshly baked goods from my Easy Bake Oven, but he got the actual Star Wars cantina! It was like George Lucas himself had invited us over for a drink. I got a Barbie car, but he got a TIE fighter! A collection of figurines tightly grasped in our hands, we reenacted every way possible we had planned to save the galaxy. I remember using sticks to simulate the blasters as we ran around our yard yelling “PEW! PEW!" Seriously, our sounds effects were so real, they scared even us. I recently told my now nine-year-old about the Sears Wish Book."

For those not familiar with the Wish Book, it was massive and kids would thumb through and circle what they wanted for the holidays. It's a paper version of an Amazon wish list. Kim says, "My brother circled the Star Wars comforter and lo and behold, come Christmas, he was sleeping under the protection of the Jedi. Was I jealous? Yes. And I still am."

Do you have any holiday memories associated with Star Wars? Share them with everyone in the comments. If you have pictures of any Star Wars toys you received for Christmas as a kid, send them to me on Twitter!