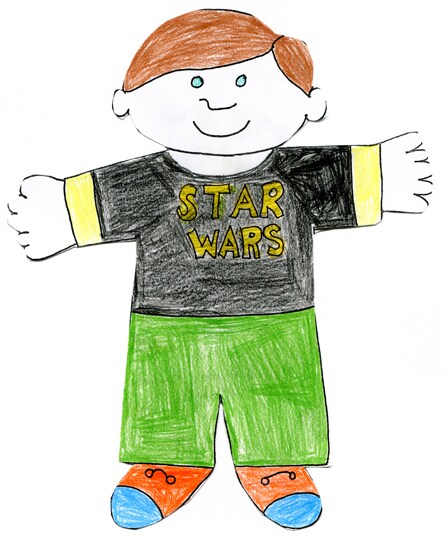 Hi! My name is Flat Stanley. If you’re of a certain age, you may have met me in school. I was born in a 1964 book by Jeff Brown, but I still look like I go to elementary school because that’s part of the magic of books and reading. I get to travel all over the world thanks to tens of thousands of students who read my adventures and a group called The Flat Stanley Project. I’m even an App!

But this is about one of my recent trips, a 2,636-mile journey from Mrs. Moore’s first-grade class at Six Mile Elementary School in Six Mile, South Carolina, to a magical place called Rancho Obi-Wan about an hour north of San Francisco. I guess I could have taken buses, but even nonstop that would have taken 39 hours -- and that’s a long time to be sealed inside an envelope. Instead I was lovingly tucked into a FedEx pack and whisked away. It was marked “Extremely Urgent,” and boy, did that ever make me feel important!

My full name is Stanley Lambchop, but ever since I was accidentally squished, my family and friends called me Flat Stanley. There are definite advantages to being flat. I can slip under doors, or I can fold up small enough to be put in an envelope and be sent to amazing places all over the world. So kids and teachers read and write about me, make copies of me, and then select great places to send me. Hosts then send photos and some details about Flat Stanley’s visit. That way my student friends get to know a lot more about the world, interacting with others through me. 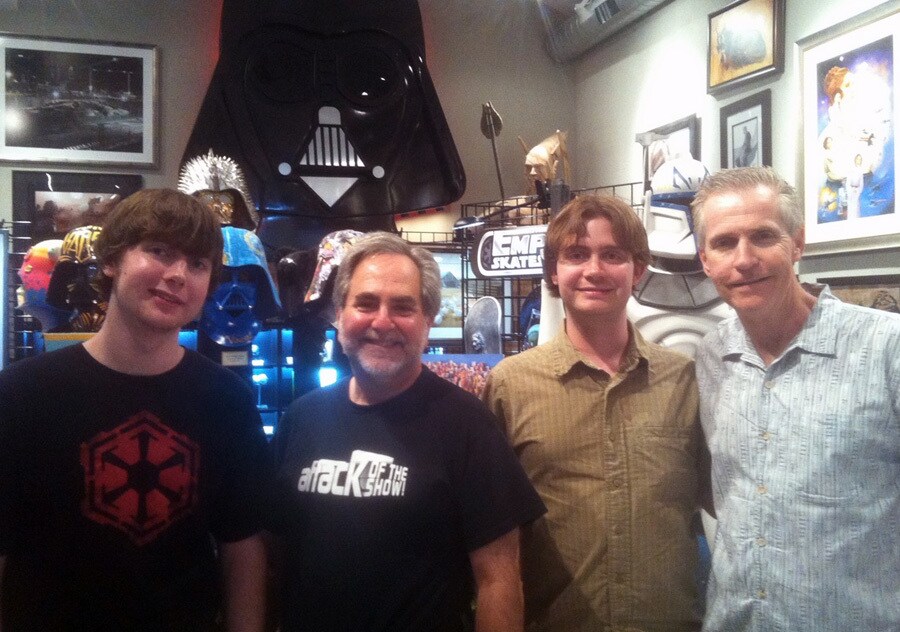 Last summer, Mrs. Moore’s husband Sam and her sons Nate and Lance -- all of them huge Star Wars fans -- toured Rancho Obi-Wan. Mr. Moore then suggested to Mrs. Moore that it might be fun to send me along to the Rancho, home of the world’s largest Star Wars collection. I love Star Wars -- and so do all the students in Mrs. Moore’s class, and they’re only six years old! You can see that they dressed me in a special Star Wars t-shirt, and they’ve been letting me hang out with the voice-controlled R2-D2 in their classroom. The little droid and I spend so much time together that I’m beginning to understand him! Maybe when I grow up I can become a flat protocol droid.

I spent three days at Rancho Obi-Wan, and it was so exciting, I hardly know where to begin. The people there, especially Steve and Anne, seemed very happy to see me and showed me every nook and cranny of the 9,000-square-foot museum filled with nothing but Star Wars! I even got to sit in on the recording of the Sith Happens podcast. The museum is awesome…and it is huge! I hear that the collection contains about 300,000 different items. That means if every kid at Six Mile Elementary could pick 100 items to take home with them, there would still be plenty left over. I played the holographic chess game like the one you see in Star Wars, but knew enough to let the Wookiee win. In fact, because of my size, I was one of the playing pieces. The holomonsters look fierce, but they’re really just pussy cats when you get to know them. 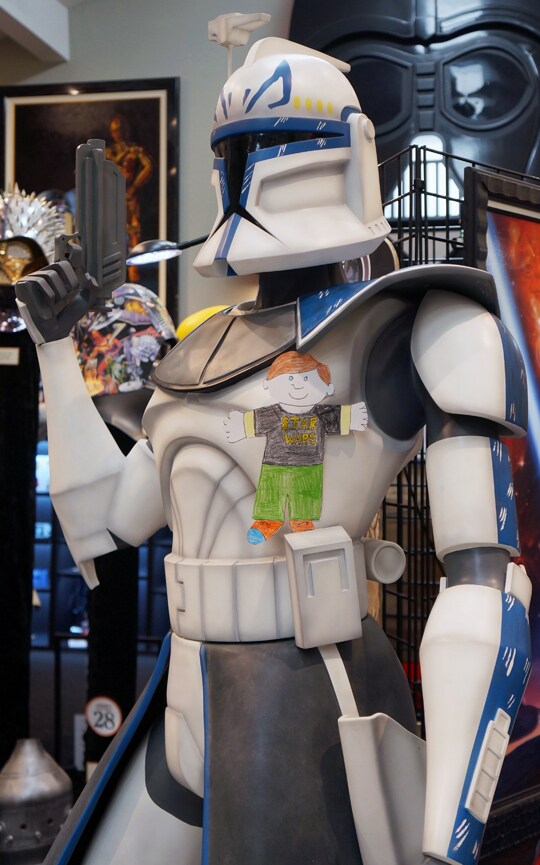 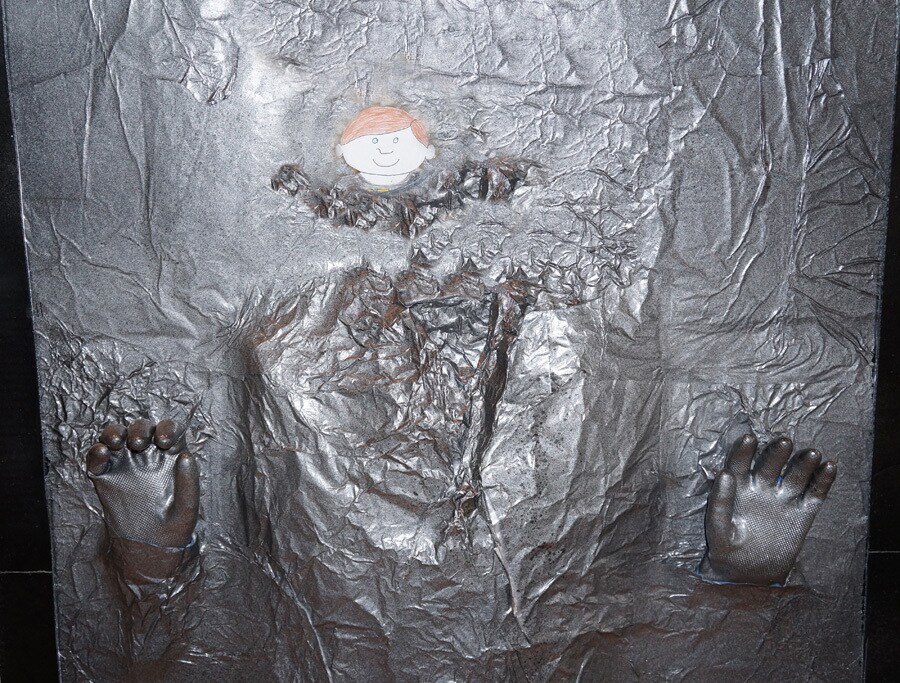 I hung out with -- or actually on -- Captain Rex, one of my favorite guys on the animated TV series, Star Wars: The Clone Wars. And for a minute, I became Stanley in carbonite, although I forgot to smush up my face like Han Solo did when he became a frozen ice pop in a carbonite block. 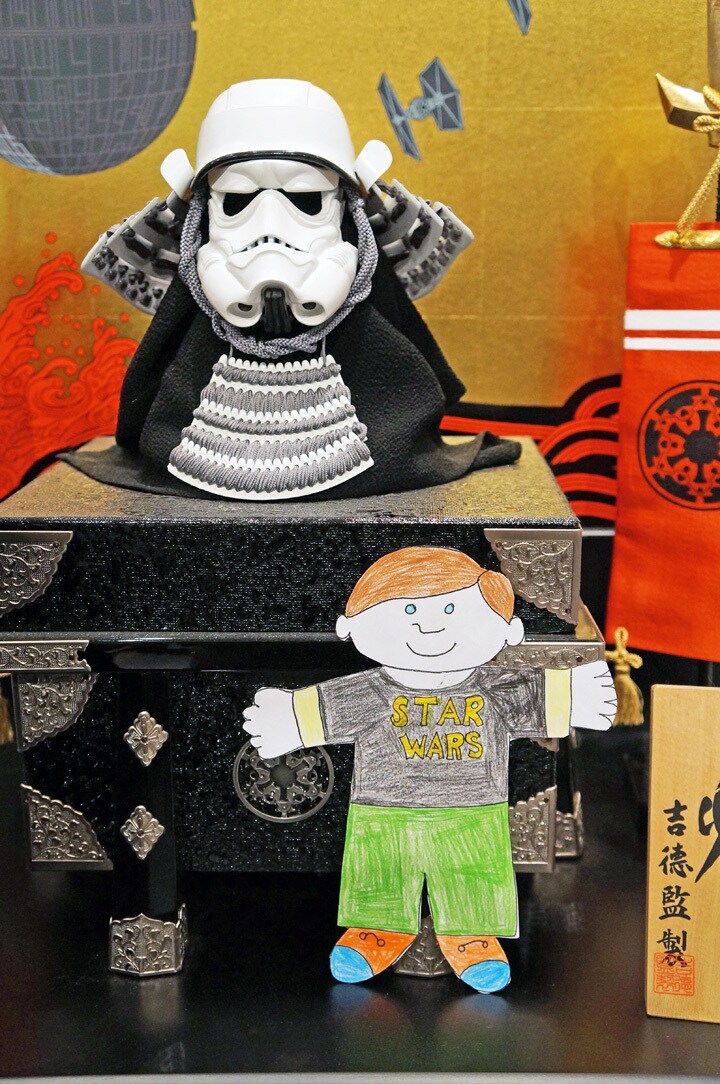 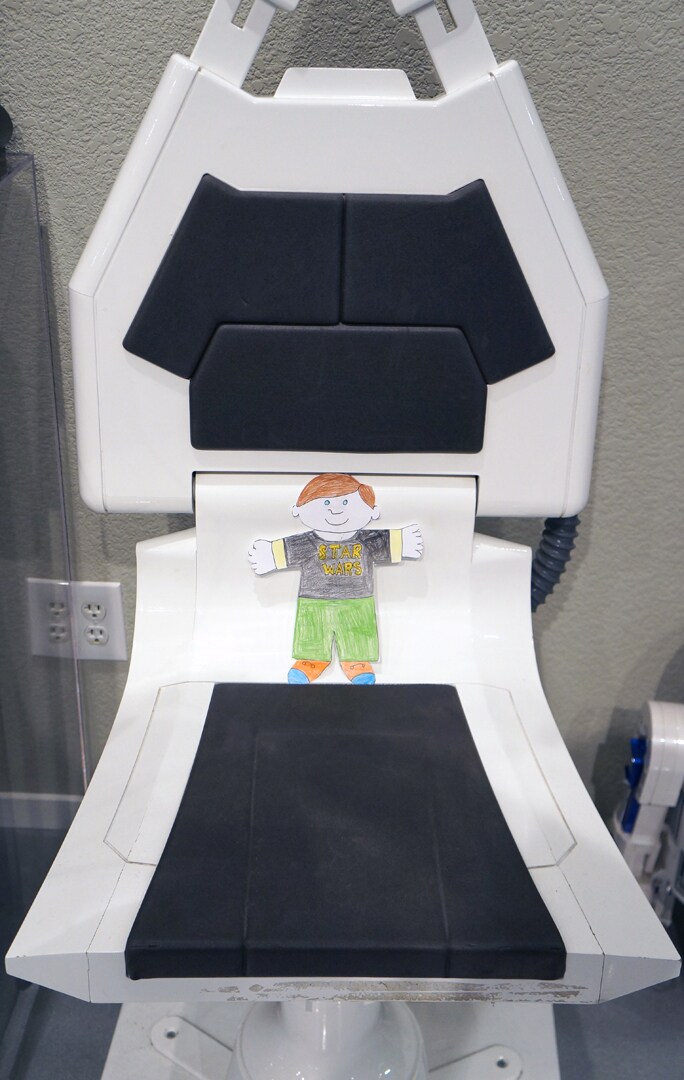 It felt like I was in far-off Japan when I posed with a samurai Stormtrooper headpiece made by Japan’s oldest doll company—more than 300 years old! I got to sit in one of the actual pilot’s chairs from the Alderaan cruiser we see at the end of Episode III, and got so carried away that I shouted, “Take us up to warp speed, Mr. Sulu.” Whoops! Wrong Star, but since the same guy is directing the next Star Trek and Star Wars movies, I didn’t feel too embarrassed! 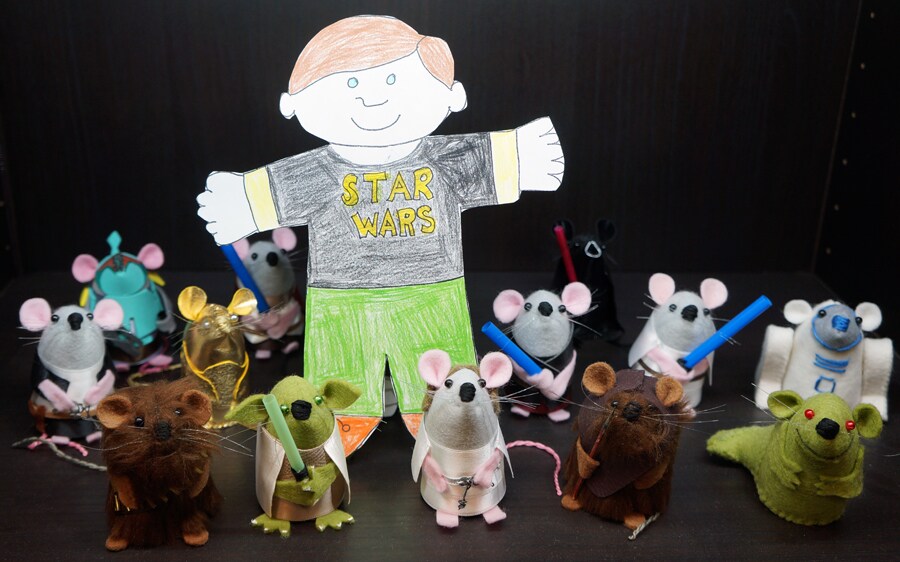 There were lots of creatures to study, including Stewok the Ewok, a very oversized resident of the Forest Moon of Endor. Stewok’s head is made from all of the actual pieces used to make the Ewok masks for Return of the Jedi! And then I got to play with a whole bunch of Star Wars mice! I really don’t remember them from the movies…but maybe they’ll be in the next one. I could have stayed at Rancho Obi-Wan for a week or more and not seen everything. But I had to get back to South Carolina to my first-graders by March 6 for Write Night, when I’ll be on display with all of the photos and the kids will write about my adventures with Star Wars. So Steve, the guy who owns this place, put me into his R2-D2 mailbox to send me home. I think he forgot the envelope, but Star Wars is so magical that I know I’ll make it back in time, even if I have to travel through hyperspace in some bucket of bolts!

Steve Sansweet, Fan Relations Adviser for Lucasfilm, is chief executive of Rancho Obi-Wan, a non-profit museum that houses the world’s largest private collection of Star Wars memorabilia. To find out about joining or taking a guided tour, visit www.ranchoobiwan.org. Follow on Twitter @RanchoObiWan and https://www.facebook.com/RanchoObiWan.