Ewoks Return to the Redwoods Thanks to the Ewok Builders Club

Yub nub! The Ewoks are back among the trees of Endor thanks to these dedicated fans in the Pacific Northwest.

Many Star Wars fans have taken the trek to the Redwoods National Park in California to visit the lush filming location of one of their favorite movies. But none of them have brought actual Ewoks along in the car on their road trip -- until now.

The Ewok Builders Club, which got its start in the Seattle area in 2014, began as a side project for a one-of-a-kind vacation. “We were planning to visit the Redwoods to see filming locations from Return of the Jedi,” says Amy Sjoberg, one of the founders of the Ewok Builders Club. “We came to the conclusion, 'The trip would be even better with Ewoks!'” (The same could be said of any trip, really.) 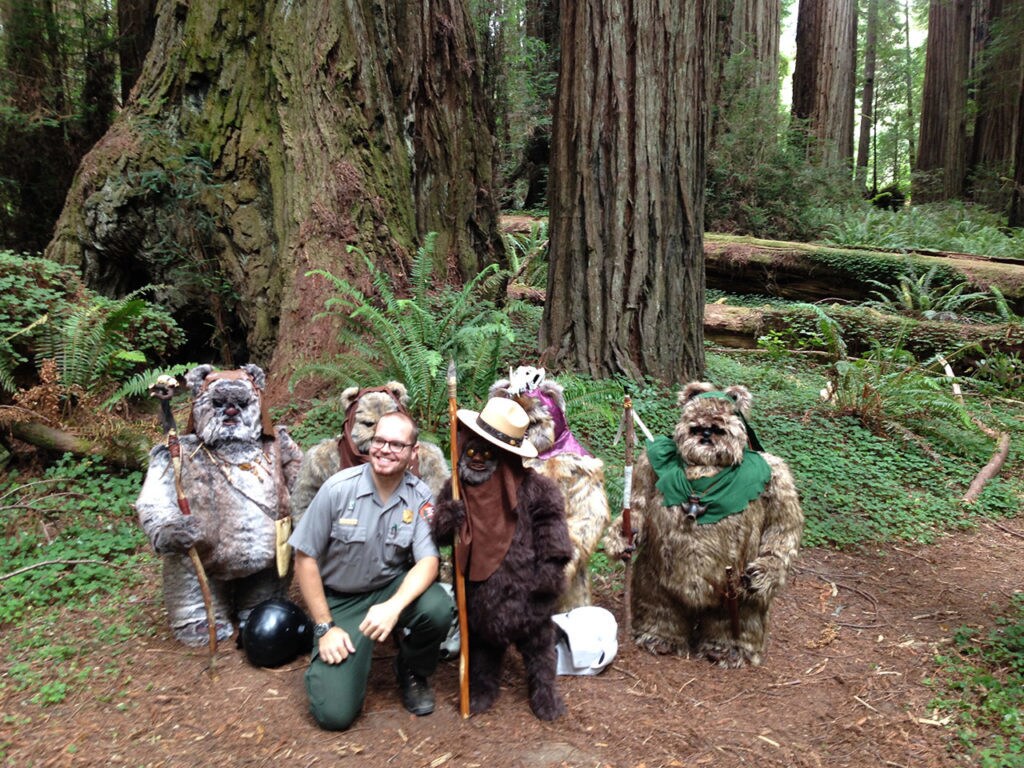 Using patterns from original costumes, the crafty Star Wars fans put together six full-sized, poseable Ewoks and one wearable Ewok costume in just two months. Five were packed in the car and made the trip to California for an eye-catching photo shoot, but the Ewok adventure didn’t end there.

“We came up with the idea for a builders club when we were on the trip,” Amy says. “Many people stopped us on the road and asked about the Ewoks, so we started the Facebook page as a way to share what we had learned.”

The Ewok Builders Club quickly grew into a community where fans and builders can share tips and photos of their creations as they’re in progress. To become a member of the club, all you have to do is join the Facebook page, where you’ll find information on getting started along with photos of past builds. Members make both prop Ewoks and wearable costumes. There are over 550 members of all ages, and the gathering of both builders and Ewoks continues to grow.

“Currently, there are 18 finished Ewoks and Woklings belonging to 20 builders,” says Amy. “Each one has its own name and unique personality.”

A prop Ewok begins as a skeletal frame made of PVC pipe, armature wire, and wood bases, Amy says. “From there we build undersuits that give the body dimension, using foam and rubber cement,” she says. “The next steps are where the Ewoks really begin to get some character.”

Faux fur is sewn into a form-fitting suit and attached, and then hands made from work gloves, faux fur, and nails formed with Sculpey Clay are attached.

“Finally, the face itself is worked over a styrofoam head and a Halloween mask,” Amy explains. “Foam is added to the mask to provide in areas that need contouring, such as the cheeks and chin. Eyes are caps that are spray painted black.”

Accessories and adornments help the Ewok’s personality come through. “This is where people can get really creative: Necklaces made out of beads and leather cording, arrows fashioned from twigs and feathers, staffs made from branches and found objects, eye patches made from faux leather, nets adorned with shells,” she says.

“Once most builders complete the accessories, they have already started to think of what kind of Ewok they have made. Sometimes the occupation or accessory lends itself to the name that people give their Ewok.”

On the group’s page, you can catch of glimpses of Ewoks named Ude, Turrik, Garrish, Lotor, and more, all lovingly made by hand and hot glue.

Each Ewok takes about 100 hours of work from start to finish, Amy estimates. Each builder faces their own personal challenges during crafting, whether it’s the sewing or perfecting the details on an Ewok’s face, but that’s what the club’s close-knit community is for.

“That is the great thing about working together with a group,” she says. “Everyone has their own strengths and can help others.”

As the Ewok Builders Club welcomes more members to the tribe, Amy hopes Star Wars fans around the world will catch the building bug as well. “We would love to see more people making Ewoks outside of the Pacific Northwest,” she says. “Perhaps we could one day have a display or a large photo shoot with them at a Star Wars Celebration.”

If you’re near the Seattle area, you can meet the ferociously furry creations at conventions and events when they team up with the 501st Legion. And don’t worry, they won’t try to cook you. Probably.