StarWars.com talks with Art Director Amy Beth Christenson about kitbashing the Aces' racers, how Flix is related to the Ewoks, and more! #News

The look of Star Wars is unlike anything else in popular culture. Step back in time to explore the history and philosophy behind the concepts that define the galaxy far, far away in Designing Star Wars.

In Star Wars, nothing's ever really gone. More than 40 years after the first film, creators routinely go back to those earliest drawing boards for inspiration. And oftentimes, among the stacks of unused concept art and sketches, they find models and muses for the next generation of Star Wars storytelling.

In creating the new anime-inspired look of Star Wars Resistance, Art Director Amy Beth Christenson turned a forgotten Ewok ancestor into a bird-like business partner, resurrected an impossible droid, and kitbashed pieces of some of the most recognizable ships in the galaxy into something new and unique. "We have a tradition of going back and looking at what didn’t make it," Christenson says, scouring through the old Ralph McQuarrie, Joe Johnston, and Nilo Rodis-Jamero concepts.

BB-8 was already a big-screen star when Christenson and her team were designing the look of Resistance. But to translate Poe Dameron's beloved droid into animation, she consulted early concept art for the roly-poly astromech's debut in The Force Awakens.

The idea was to reimagine BB-8 in the anime-inspired style, a slightly rounder, "stylized and squat version of himself." The redesign was also a conscious effort to differentiate the animated version from his live-action counterpart but retain the spirit of the feisty little droid.

"There’s a level of simplifying that went with it, as well," Christenson says. The animated BB-8  has just one antenna and "you don’t see the red light in the lens." But she was meticulous about maintaining the details on the individual plates around the roundy's body.

“I think the biggest thing was the eye size. The second I started going through the images of the concept art, that was pretty consistent," Christenson adds. "BB-8 has a pretty small head in proportion to his body but he needs to be up there [on Resistance] acting with all these other animated characters."

Although he's claimed he's part Gungan, Flix actually shares some lineage with the Ewoks of the forest moon of Endor. Well, sort of.

Before the showrunners met to settle on plot points, Christenson and her team had drafted pages and pages of character designs for background vendors, mechanics, and racing fans. "Flix and Orka just happened to be on a page together, next to each other on a lineup," Christenson says. "When (Dave) Filoni saw them together he was like, 'Those are our acquisitions guys. Don’t change anything about it. That’s them.' Just the contrast between body types of Flix and Orka, worked really well together."

In designing Flix, Christenson used two pieces of original Ewok concept art to inspire Orka's long-legged partner. One was little more than a fuzzy scrawl, a rough idea of a lithe alien in goggles next to what would later become the design for the Yuzzum species.

A second discarded Ewok design helped focus the idea, with a beaky nose and beady eyes poking out from fuzzy, feathery tufts of fur. "What if I ended up making this a space chicken?" Christenson thought.

"So that’s what I did. There wasn’t really any big 'A-ha!' moment. I started drawing it and it sort of came together, the idea of this super simple egg shape with big eyes, a little beak, little antennae, and long legs. Super goofy." 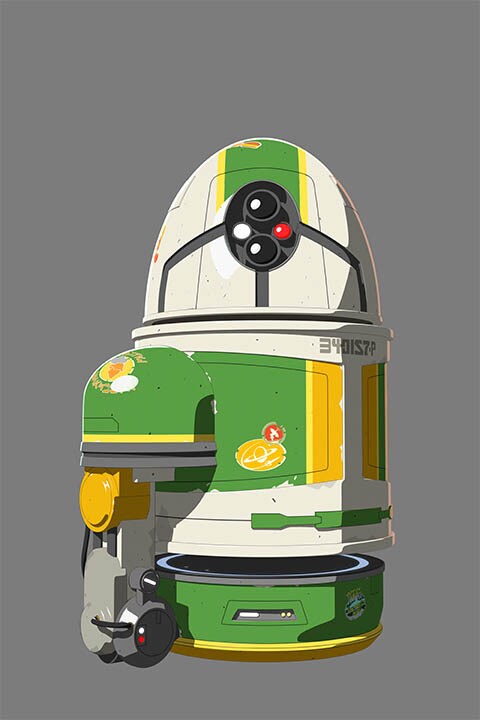 To create ace pilot Hype Fazon's astromech R4-G77, a technological marvel unlike any other droid seen before it, Christenson took a page from original trilogy designer Joe Johnston's sketch book.

One of those first concepts even appeared to float.. That design would have added new challenges for the special effects team working on the film, but proved to be just what the Aces required. "It’s pretty different from anything," Christenson says. "It did sort of take a visual jump. You don’t really see that much in the other astromechs."

In-world, Hype's prestigious racing record has netted him fame and fortune through numerous sponsors, represented in patches decorating his jumpsuit. It stands to reason that the cocky Rodian would also enjoy other trappings of wealth -- including a unique, customized droid. "He’d want to stand out. He’d want to be different," says Christenson. "So looking at that, it sort of just fit." To create the fleet of custom racers, Christenson took part in a hallowed Star Wars tradition -- ship-building through kitbashing.

While the original ship builders and model makers took model rockets and motorcycle kits off the shelves and reimagined the parts as the starfighters and speeders we know today, Christenson looked to those final designs and earlier concept sketches to salvage her own array of parts and pieces for a never-before-seen look.

"Torra’s born with a lot of money and you can kind of tell," Christenson says. "For her, everything would have been custom built."

The A-wing informed the design. but the smooth curves and general shape also took into account the character. The precocious young racer would need a custom ride built for speed, so it had to be aerodynamic. It also had to match her individual style. "It sounds kind of silly but her bubbly personality, literally, we tried to get that into everything. Even her droid is a lot more rounded."

"We always try to design the ship to the personality for the racers," Christenson adds. For Hype's green Ace, Christenson started the design with an X-wing cockpit, "although by the time we got to the final Hype cockpit we would have remodeled it."

For Griff, the character's background as a former Imperial TIE fighter pilot informed the design. "Maybe back in the day if he’d been some sort of tester for new TIEs, they were always kind of redesigning the TIE," Christenson surmised. Maybe this was the new next generation of that TIE," at least at the base level.

When it came to a new speederbike design, Christenson used a similar thought process.

She revived an old design by Nilo Rodis-Jamero from the archives.  The short answer behind what drew her to the sketch: "Awesome design, wanted to use it somewhere," she says with a smile.

It was also a logical offshoot of the speederbikes the Empire used in Return of the Jedi. "They’re pretty lightweight looking. They’re pretty thin. They break apart easily," Christenson says. This more substantial design felt like it could withstand the momentum and sudden drops the episode called for. "You haven’t seen anything that beefy before. It felt like you had something that had a lot of engine to it to be able to handle that drop."

The book of galactic flora and fauna includes this sketch by Terryl Whitlatch of a tiny Voorpak family. "The biggest that Terryl drew it was actually dwarf-rabbit sized," Christenson says, or "teacup-poodle sized."

In Resistance, the Ace pilot's pet needed to be more dog-like, so Christenson scaled it up, but the basic premise was largely perfect. "That design was fantastic because it was like half dog, half cat, half rabbit, half spider,” Christenson says.

She also reduced its spindly legs from eight to just six, "kind of just to help save the animators' sanity, honestly," she says. "It was twofold: animator sanity and it was too busy to look at. Having those eight legs, especially with Buggles being bigger, you didn’t know what leg was supposed to be what."