Comic Book Galaxy: The Menace of Grakkus the Hutt and More

StarWars.com discusses why Grakkus is a great new Star Wars villain, looks at the highlights of Han Solo #3, and more!

It’s a shortened week, due to the Labor Day holiday, but never fear, Comic Book Galaxy is here! We will look at the week that was in comics, as well as tantalize your comic book taste buds with what’s new and fresh from the comic book oven. Last week featured Han Solo #3, and this week brings us another offering of Poe, as he tries to flee Megalox prison in one piece in the pages of Poe Dameron #6. And while we’re on the subject of the Black Squadron leader’s adventures, how about we take a closer look at Grakkus the Hutt? Not too close though. He bites. (Probably.) 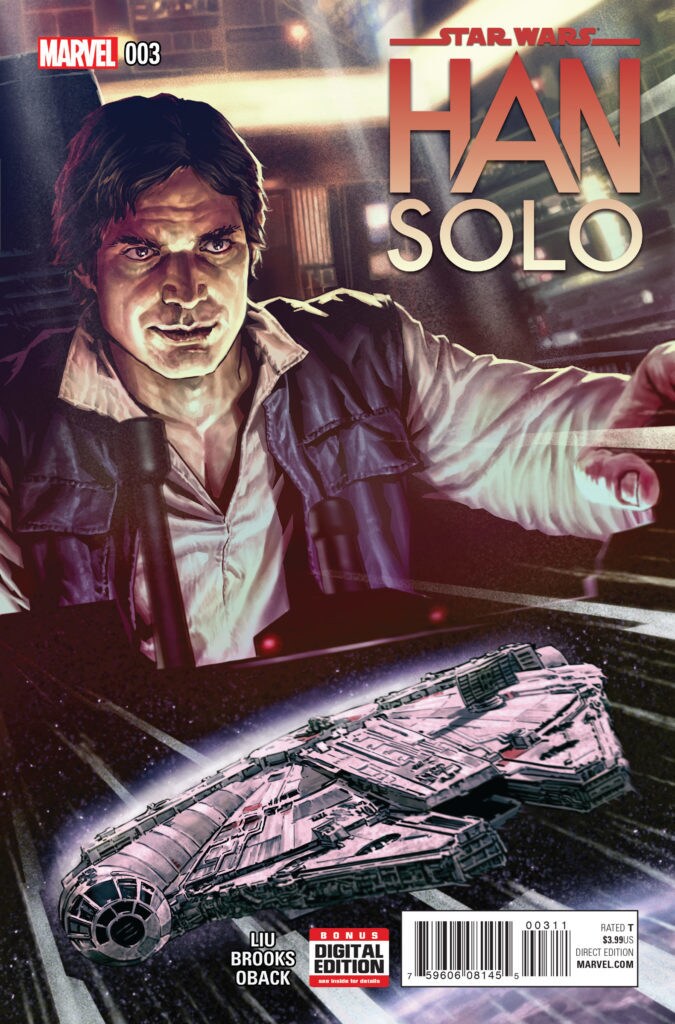 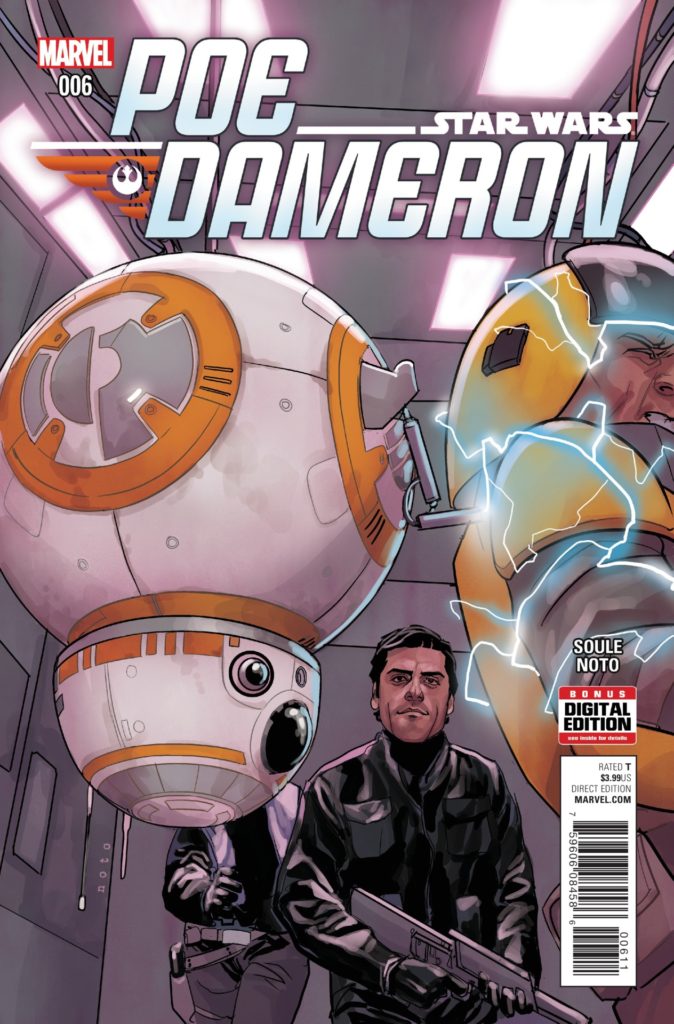 In this issue of Poe Dameron, Poe and his Black Squadron compatriots need to figure out a way to sneak Grakkus the Hutt out of Megalox prison and take on some of its permanent residents. Plus, they have to do so before Agent Terrex kills Grakkus. So, to recap, Poe is about to throw down with some nasty criminals, and has to inconspicuously smuggle out a Hutt. Good luck with that.

I’ll never forget the first time I saw Return of the Jedi. The anticipation was unprecedented for me; it had been three years since The Empire Strikes Back, and I finally got to see things I’d only dreamed about. Many stand out, of course (Luke Skywalker as a Jedi Knight, the fate of Darth Vader, Han Solo’s escape from carbonite, etc.), but the film moment that first blew me away was the appearance of Jabba the Hutt.

He was huge! He was grotesque! He spoke Huttese like a boss! He was…eating frogs? Gross. Anyway, it left an impression on me and many Star Wars fans. Leia the Hutt Slayer took care of him eventually, but the Hutt species had made its mark. 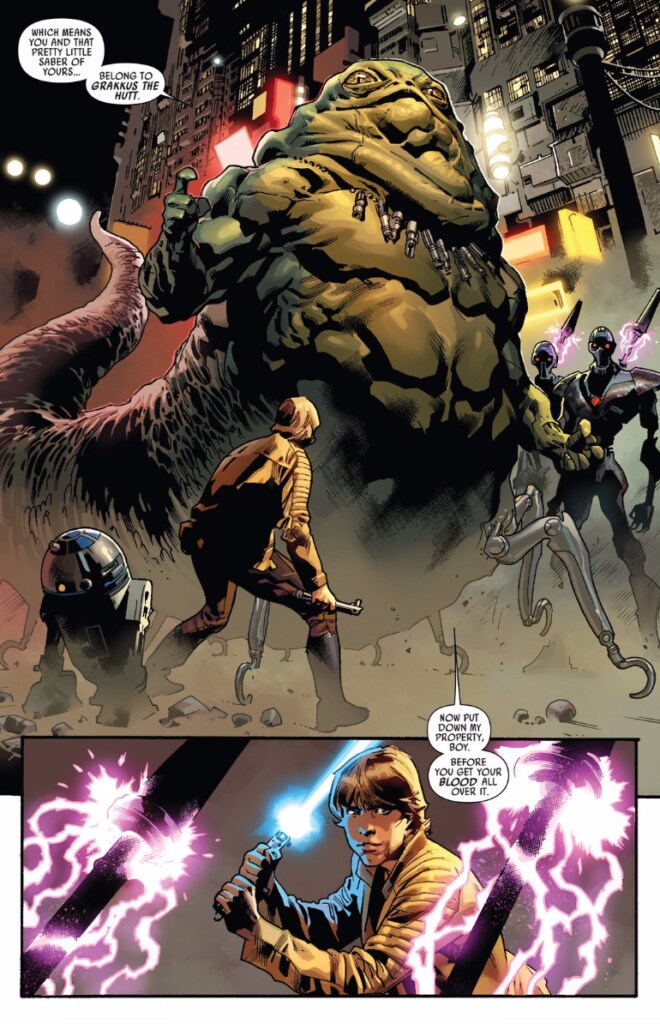 Fast forward to the current day: we’ve met a number of different Hutts, each one bringing a foul stench in their own right. However, Star Wars #9 brought us the first visual of a new Hutt unlike those that came before him: Grakkus the Hutt. He ups the ante, and brings some new tricks to the table that would make any slug-like creature proud. He’s not your average crime lord. And he’s certainly not your typical Hutt. But what stands out about Grakkus?

How about this: he’s got legs, and he knows how to use them. Grakkus possesses cybernetic legs that allow him to move around like a spider, but with more purpose and arrogance. He’s also buff. No, you aren’t imagining things; the dude is buff. He’s got a straight up six pack, too (it’s probably more than six, but I’m not about to get up close and personal with him). 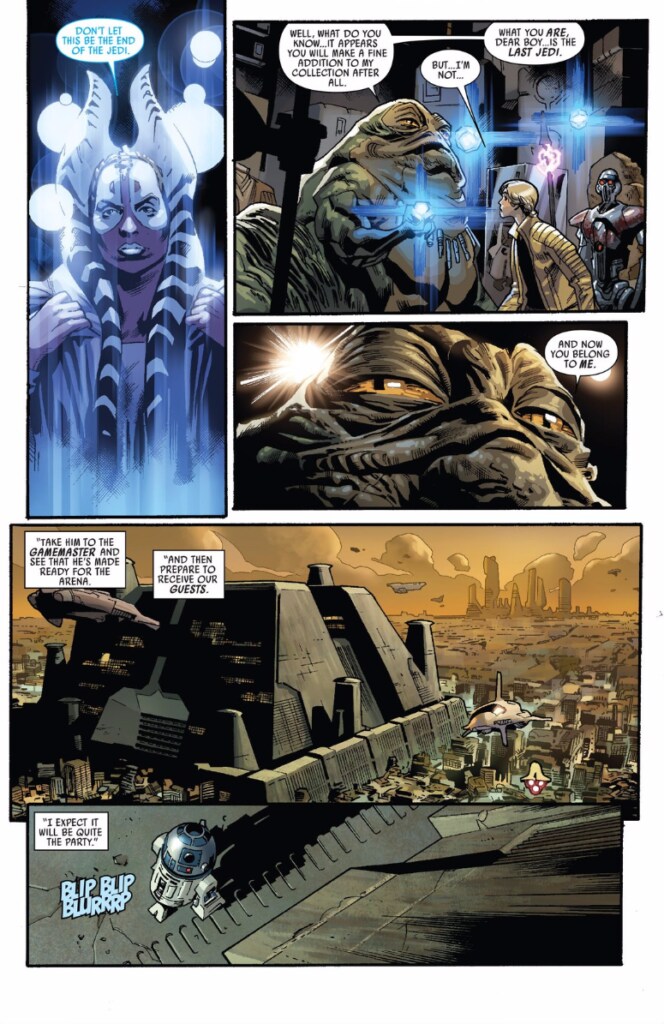 Grakkus the Hutt also has a collection that is not favorable for Luke Skywalker. He collects artifacts from the Jedi Order. It’s fair to say he’s obsessed, actually. Lightsabers, holocrons, and bones of Jedi Masters are a part of his hobby, and he even tries to add Luke Skywalker to the mix. He’s greedy, like many of the Hutts we’ve encountered before, but since he’s concerned with money, power, and Jedi souvenirs, he shows both passion and purpose. He’s no joke.

His machinations make him more compelling too, as we’ve seen in the pages of Poe Dameron. He’s wily, confident, and dangerous, and Poe will have to bring his A game if he’s going to find the whereabouts of Lor San Tekka from Grakkus the Hutt. I cannot wait to see how it all plays out. Bo shuda!