Get a sneak peek at more of Han, Luke, and Leia's adventure aboard a stolen Star Destroyer and much more!

Happy Wednesday! It’s time for a weekly trek to your favorite comic book shop as more Star Wars goodness awaits, and Comic Book Galaxy is right there with you to enjoy the latest offerings. First up, an exclusive first look at Star Wars #23. Then we'll look back at the best bits of Star Wars #22 and issue #3 of Star Wars: The Force Awakens, and then see what's going on with Han Solo’s run in with an Imperial fleet in Han Solo #3, which hits stores today. And if that wasn’t enough to spark your voracious appetite for Star Wars comics, also look at what Marjorie Liu and Mark Brooks have done with Han Solo and Princess Leia’s relationship in the Han Solo mini-series. You love them. We know.

Last week, Han, Luke, and Leia successfully stole a Star Destroyer -- but the mission ain't over yet. The story continues in Star Wars#23, hitting shelves September 28, and based on the preview below, it looks to be full of explosions and awkward Han and Leia moments. In other words, it looks awesome. Check out our exclusive first look, featuring pages and a variant SCAR troopers cover by Jorge Molina, the main cover and sketch variant by Mike Deodato, and a Hoth Rebel action figure variant cover by John Tyler Christopher! 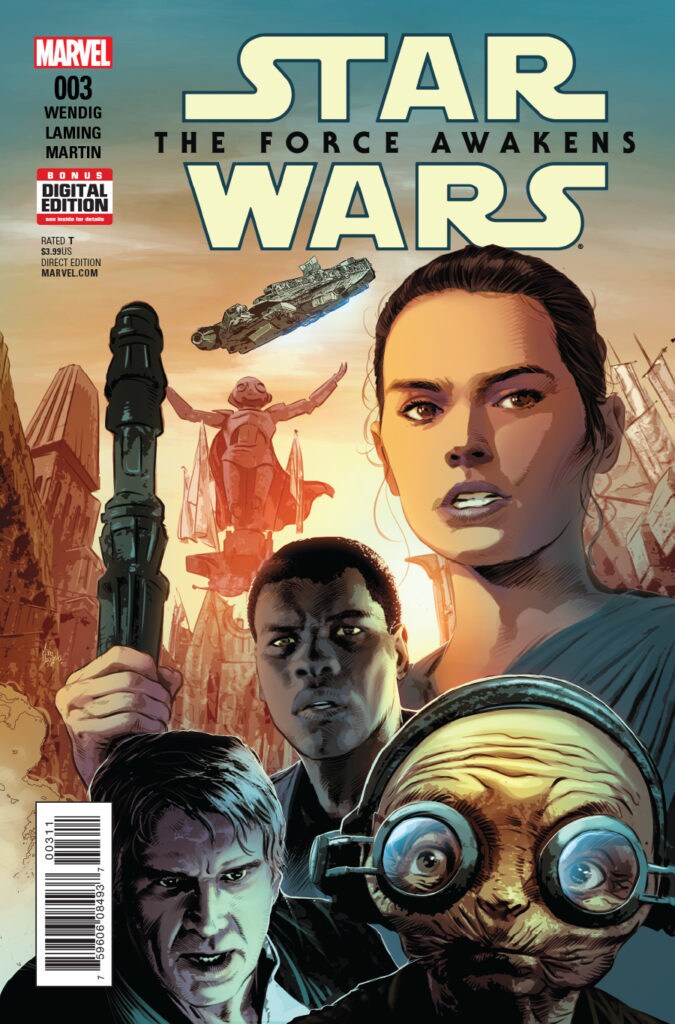 In Issue #2, Han’s thrilling exploits in the Dragon Void Run resume. So far, he and Chewie have encountered a bevy of colorful characters and danger around every corner. (Naturally, that’s exactly how he likes it.) The race is certainly not for the weak of heart, either. Among the many obstacles for the duo: mines amidst the race, egos of the other participants, and the Imperial army. Ever the spoilsports, the aforementioned Imperials show up at the end of issue #2 to arrest Han Solo and the rest of the racers.

Can’t a charming smuggler catch a break? Smart money says he will, and he’ll employ that cavalier bravado we all know and love. But that may be the least of his worries. There is a traitorous rebel spy out there, and Han has to rescue each candidate, in the hopes of finding the disloyal fiend. He’ll need to stay alive during the whole process, and there’s the matter of that race, too. Chewie keeps reminding him they aren’t there for the contest, but this is Han Solo we’re talking about. Will his competitive nature be an asset, or a detriment?

Word Balloon: All you need is love: Solo and Leia in Han Solo

One of the more charming elements of the Star Wars universe is the unconventional courtship between Han Solo and Princess Leia. We know the lines, we remember the beautiful moment on Cloud City before Han Solo becomes an ice cube, and we get emotional when they reunite on screen in The Force Awakens. We can’t seem to get enough of these two, who have the perfect blend of charm and stubbornness. It’s a love paradox with Shakespearian humor and drama, and it’s no wonder we want more.

This recipe is served to us as well in the pages of Han Solo through the talents of Marjorie Liu and Mark Brooks. They bring provide some brief, yet tantalizing moments between the princess and the scoundrel that deserve another look. We're on the ground floor of their burgeoning relationship, and it's really fun. The first issue in the series provides another volatile moment between the smuggler and the princess that is genuine and original, and adds nuance to their relationship as we know it. In an improvisational move of her own, Leia punches Solo in the jaw (when he leans in to kiss her), in order to sell Solo’s departure from the Rebellion. Brooks captures the moment beautifully, as the panel immediately after the punch heard ‘round the Rebel Fleet reveals the turmoil both characters feel. The art, as well as the decision by Liu to have no dialogue in this panel emphasize that both have regrets. It’s a motif the two share throughout their known history, and helps to explain some of the tension they feel at the beginning of The Empire Strikes Back. Perhaps it’s no wonder he sounds so angry when he exclaims, “You could use a good kiss!” in the film.

Issue #3 provides another moment between the two, but neither of them are even aware of it. Leia is watching with baited breath as Han Solo and the other racers are arrested by Imperials. She then leans forward on the control panel as she stares at the monitor before she speaks. It’s not so much what she says, as how she says it that provides this brief hint of her affections. Admiral Airen speculates that Solo may have abandoned them, and she replies, “Don’t give up hope just yet. If there’s one thing I’m sure of… Han Solo is a survivor. And he’ll survive this.” While she sounds calm, the look she gives (courtesy of Mark Brooks and Dexter Vines) speaks much more to her emotional state. She’s scared for him; much more than she lets on to the Admiral. Han provides a similar moment of brief emotional awareness when he says in a text box (only “heard” by the reader, of course), “For once, I’m worried about something besides myself.”

Knowing what’s eventually going to happen between Han and Leia makes this series all the more rich and interesting. It’s going to be something special to see what else occurs as they get closer to The Kiss aboard the Falcon, in the belly of a space slug. What’s more romantic than that in a galaxy far, far away?