Build the Future powered by Star Wars: Force for Change brought together tenacious teams to tackle the problems of today for a better tomorrow.

Disney, Lucasfilm, and FIRST® teamed up earlier this year to launch Build the Future powered by Star Wars: Force for Change; teams from around the world submitted their stories of science, technology, leadership, and perseverance to create a brighter future for everyone.

StarWars.com is thrilled to highlight three out-of-this-galaxy teams from the campaign: Lunatecs from New Jersey, Exploding Bacon from Florida, and CocoNuts from Arizona. Leaders from these three brilliant FIRST® Robotics Competition teams chatted about how they were introduced to FIRST, their exciting projects, how Star Wars has inspired them, and much more. FIRST is a global youth-serving nonprofit advancing STEM education, preparing a new generation of young people for the future through engaging, hands-on robotics programs. Seth Simpkins, 18, took his first steps in the field at a young age.

“My FIRST journey started 10 years ago as part of a FIRST® LEGO® League team,” Seth recalls. “It was the starting point of understanding that, as a child, I could problem solve.”

Seth and his team, the Lunatecs, took that problem-solving mindset and applied it to a need they discovered in their local community.

“The Lunatecs’ first project was designing and engineering a volleyball launcher for a man with quadriplegia who wanted to launch a ball into play,” Seth says. “Once we realized we could impact how physically challenged individuals live, work, and play by using the skills we learned in FIRST, we knew implementing this program was a win for all.”

The team continued its work on adaptive devices, eventually focusing on a swim fin to assist veteran amputees and spinal cord injury victims under the guidance of their mentor Mike Marandola. Originally modeled with CAD software and created by hand, the team has since refined the process for 3-D printing to speed up fabrication and adapted the swim fin for use in pediatrics. “These will be used widely by therapists providing aqua therapy to help patients increase muscle strength and mobility,” says Seth.

Seth credits Star Wars, in particular Star Wars: The Rise of Skywalker, for reminding him that one person can make a big difference. “It inspires me to believe that with the right tools our generation can advance and make a difference now,” he says. 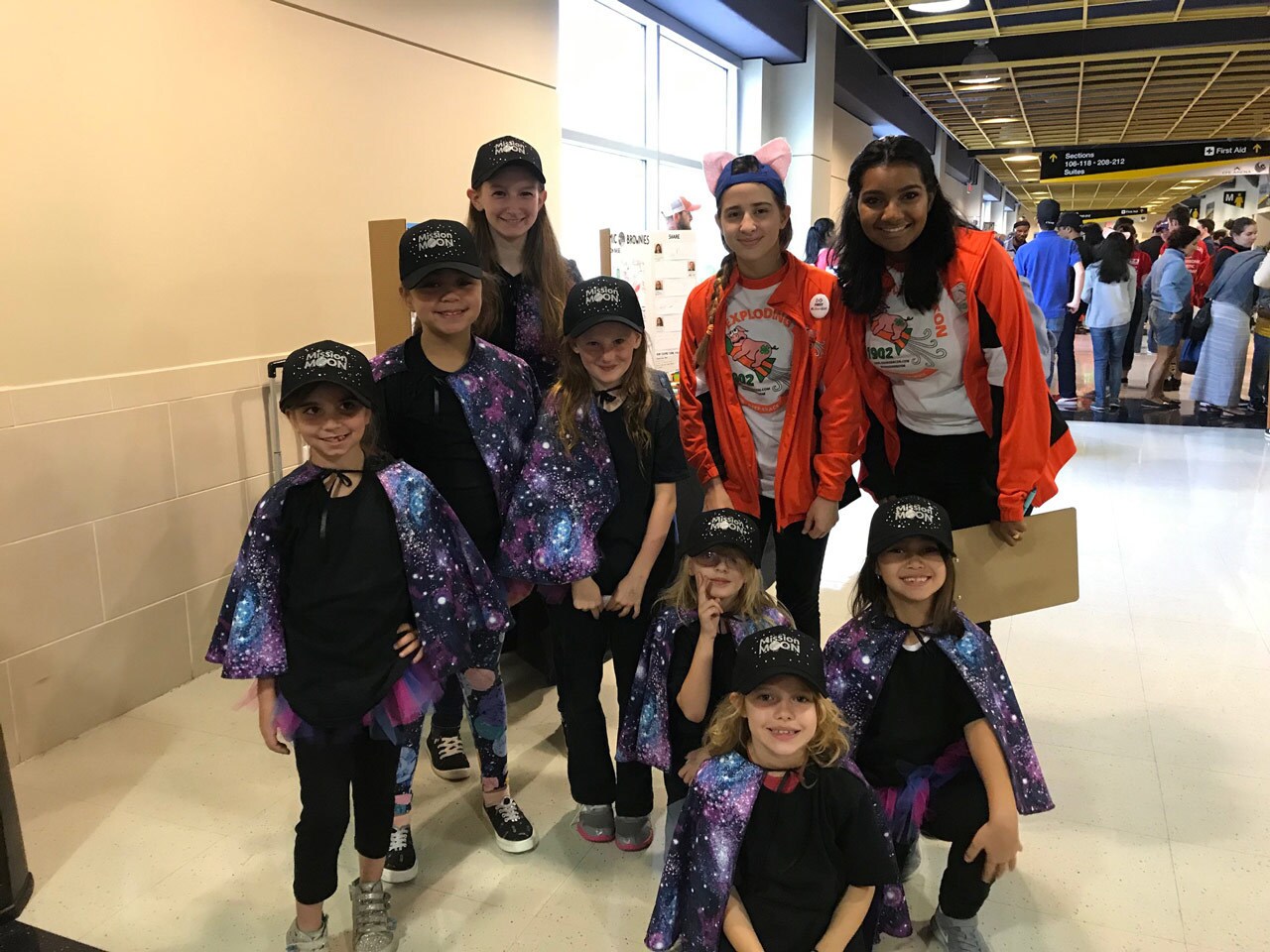 Eighteen-year-old Lexi Udowychenko of Exploding Bacon also found inspiration in the galaxy far, far away. She says building LEGO Star Wars sets with her brother first sparked her imagination. “I always wanted to know how all of the pieces and moving parts would have worked together to create some of the coolest and most imaginative technology I had ever seen,” she tells StarWars.com. “Even though it was fantasy, it inspired me to dream big and shoot for the stars.”

Exploding Bacon is a high school robotics team that launched an initiative called FIRSTLikeAGirl in 2016. The social media campaign is designed to encourage girls around the world to get interested and involved with STEM. “We continue our mission by encouraging and empowering girls at outreaches, competitions, events, and online,” says Lexi.

At the 2022 FIRST Championship held in Houston, Texas, Lexi and the Exploding Bacon team saw firsthand the impact #FIRSTLikeAGirl has had.

“One of our ambassador teams who had been really inspired and encouraged by our program came up to us during lunch to talk,” she recalls. “They began telling us about the immense impact our program had on their team, and they gave us a book. The book was about all sorts of prominent girls and women in STEM throughout history. On the first blank page, all the girls from their team had signed the book and each wrote us a message about how much our program has meant to them.”

Lexi and her team work hard to inspire future scientists and engineers because they believe a better future can only be accomplished by working together.

“For me, building the future means creating a path for myself and others that allows people to work together to make a kinder society, but also a more advanced one,” she says. “When I say advanced, I mean stronger, affordable, safer, and more reliable technology and products in all industries…I believe the only way to get there is by working with others of all different backgrounds and skill sets.” 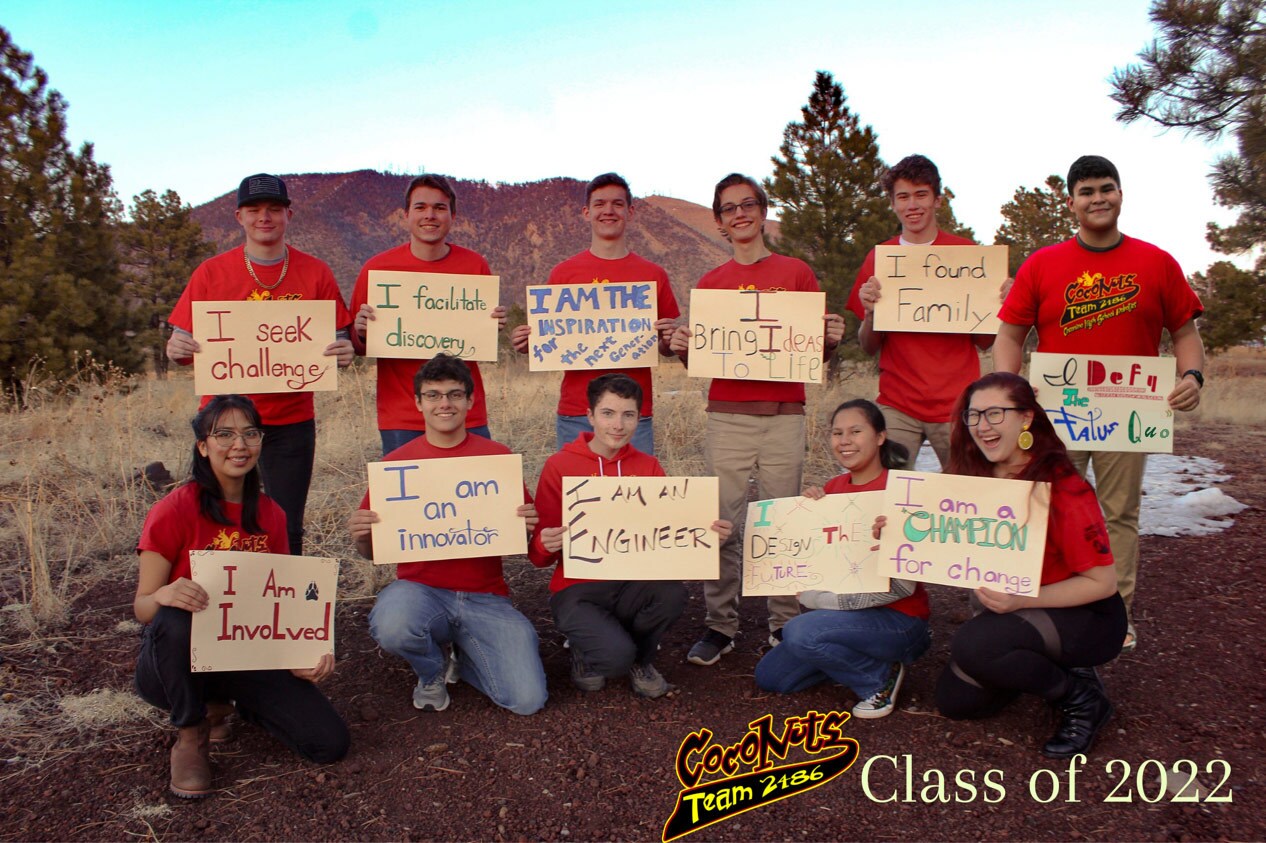 Hannah Gurne and her team are also working with the next generation to create a brighter future. The CocoNuts of Flagstaff, Arizona, focus their efforts on their local community.

“The citizens of Flagstaff, especially our school community, are an eclectic blend of people with the primary populations being white, indigenous, and Hispanic/Latinx,” Hannah tells StarWars.com. “As a team we strive to represent this demographic makeup in two main ways: by being role models and [by] enabling the next generation to continue the team’s mission of making STEM education accessible.”

Members of the team are invited to focus their energy on efforts that mean something to them personally. One senior member hosted a free STEM diversity fair at the CocoNuts school. “He entitled the event ‘También Los Puedes Hacer,’ signifying that there shouldn’t be boundaries when engaging with STEM, and that ‘I Can Do It Too,’” says Hannah.

Another teammate focused on the Diné (formerly known as the Navajo) Reservation. “She thought about her cousins that live three hours away on the Diné Reservation, and their limited access to STEM focused groups,” Hannah recalls. “She worked alongside her family and their school to create a FIRST® Tech Challenge team.”

During the pandemic, Hannah and her team continued to work with indigenous communities through virtual FIRST robotics workshops and online mentoring. “Some of these virtual trainings included teaching coding and what the various sensors are used for,” she says. “Seeing these young students get excited to build their own robot even through a screen was inspiring.”

Like Seth and Lexi, Hannah has found encouragement in the Star Wars galaxy.

“Star Wars has given us the words that have encapsulated an immeasurable amount of passion and drive,” she says. “[In 2019] the team was privileged to be invited to the Arizona Senate…In our speech, we explained our outreach methods, and how we continued to inspire hope, and finished our presentation with Princess Leia’s famous quote, ‘What is it they’ve sent us?’ ‘Hope.’

“What we originally added as an inside joke to our nerdiness and love of Star Wars was quickly realized by the team as true to our mission and message. As time has passed the last few years, the CocoNuts adopted the quote and began to morph it into our own. At the end of the day, we proudly proclaim, ‘We are the CocoNuts, and we are the Hope for the Future!’”

Kelly Knox writes features and DIYs for StarWars.com. She’s the author of Be More Obi-Wan and co-author of Star Wars Everyday. Follow her on Twitter at @kelly_knox to talk Star Wars, pop culture, and bad dad jokes.