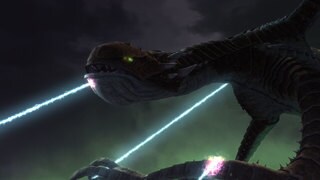 An ancient creature accidentally unearthed on Malastare during an intense battle of the Clone Wars, the Zillo Beast was a monster of legend. The enormous animal proved to be nearly invulnerable to Republic weaponry, prompting intense interest from Chancellor Palpatine. At his order, the creature was incapacitated and transported to a supposedly secure research facility on Coruscant. The Zillo Beast would not be caged, however, and it broke free from its restraints, running wild through the crowded thoroughfares of the capital, leaving swaths of destruction in the wake of its titanic rampage.

The dark side of the Force is a pathway to many abilities some consider to be unnatural, and Sheev Palpatine is the most infamous follower of its doctrines. Scheming, powerful, and evil to the core, Darth Sidious restored the Sith and destroyed the Jedi Order. Living a double life, he was also Palpatine, a Naboo Senator and phantom menace. He manipulated the political system of the Galactic Republic until he was named Supreme Chancellor -- and eventually Emperor – and ruled the galaxy through fear and tyranny. The galaxy rejoiced when he died at the Battle of Endor, but Sidious had cheated death and patiently plotted a return to power.

Discovered as a slave on Tatooine by Qui-Gon Jinn and Obi-Wan Kenobi, Anakin Skywalker had the potential to become one of the most powerful Jedi ever, and was believed by some to be the prophesied Chosen One who would bring balance to the Force. A hero of the Clone Wars, Anakin was caring and compassionate, but also had a fear of loss that would prove to be his downfall.

A grim Jedi Master with an amethyst-bladed lightsaber, Mace Windu was the champion of the Jedi Order, with little tolerance for the failings of the Senate, the arguments of politicians, or the opinions of rebellious Jedi. As the Clone Wars intensified, Mace sensed the dark side of the Force at work, and knew the Jedi's enemies were plotting to destroy the Order and end its stewardship of the galaxy.