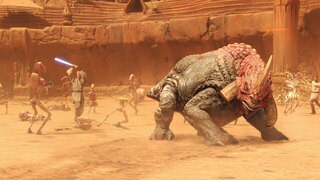 A stout brute with tough leathery skin, the reek was one of three deadly creatures unleashed in the Geonosian execution arena, dispatched to kill Anakin Skywalker, Padmé Amidala and Obi-Wan Kenobi. The surprisingly fast animal was directed by picadors to attack Anakin Skywalker. As Jedi reinforcements and battle droids waged war within the arena, the reek went berserk, charging battle droids and Jedi alike. The creature's trampling rampage was cut short by the marksmanship of bounty hunter Jango Fett.