Rather than use flesh-and-blood warriors, the Separatists prefer mindlessly loyal soldiers that are easily controlled. The soulless ranks of their armies are dominated by tall, thin B1 battle droids built as mechanical imitations of their Geonosian designers. Battle droids can be controlled by centralized command centers such as the Trade Federation’s enormous Droid Control Ships, or programmed for independent action. They often suffer programming glitches that manifest as personality quirks. Battle droids are dim-witted and no match for clone troopers or Jedi, but they weren’t designed to be smart – they were designed to overwhelm Republic civilians through sheer numbers, something they do very effectively. 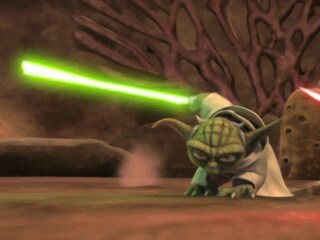 But I Just Got Promoted 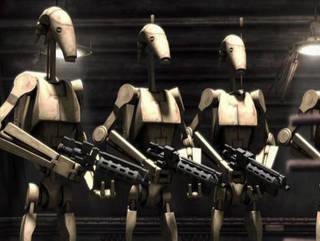 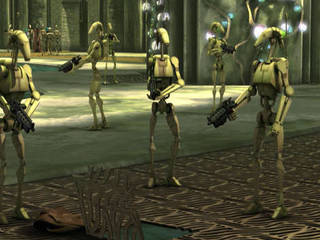 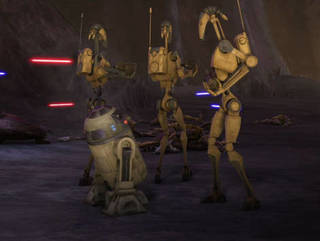 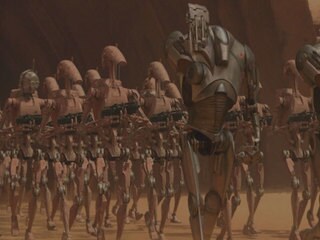 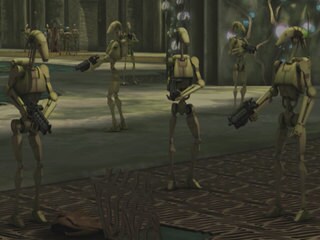 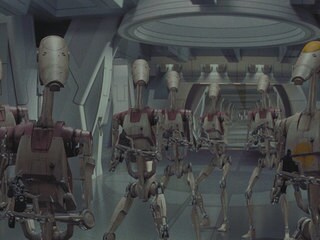 "I can't seem to hit anything."

An early use of battle droids came during the invasion of Naboo, as the Trade Federation sent armies of B1s to seize the peaceful planet’s cities. Badly outnumbered, the Naboo surrendered and were taken to internment camps by the droid hordes.

A decade later, many other worlds would share Naboo’s fate. A single clone trooper could destroy many battle droids, but there were many more Separatist droids than Republic troops. It would take years of grinding battle for the Republic to defeat the Separatists, and that victory would prove hollow. The Clone Wars were part of a Sith plot to gain power over a militarized galactic civilization, with battle droids mere pawns in that plan.