Author Phil Szostak talks to StarWars.com about his new book chronicling the concept art of The Mandalorian.

Phil Szostak considers Star Wars his first cinematic love. As a kid, he fell in love with the films and the draws of outer space.

“The river runs deep for me,” Szostak tells StarWars.com. “It’s something that’s just woven into the fabric of my being.”

Now, he is a creative art manager at Lucasfilm, and has worked on a number of concept art books within the Star Wars galaxy. His latest work, The Art of The Mandalorian (Season 1), arrives December 1 and takes a behind-the-scenes look at how the series came together, and the art that brings it to life.

In an exclusive interview with StarWars.com, Szostak lifts the hood on the lunches that helped make him a Star Wars author, the serendipitous moments that brought The Mandalorian to life, and what makes his favorite image from The Art of the Mandalorian so special.

StarWars.com: How did you get involved with the art book series and specifically this one about The Mandalorian?

Phil Szostak: I'm lucky enough to call [author] Jonathan Rinzler, and we used to just go and get Chinese food lunches together and stuff when he was our senior editor at Lucasfilm Publishing. One day he just flat out asked me. Over many conversations about film and Star Wars, we just got to know each other and just like any two people who love movies -- which is our entire company -- and I think he just got to know that these books would be perfect for me. And he just dropped that opportunity on my lap one day. I didn't hesitate. I said yes immediately. And I'm glad I did, because that's not always been true. It was scary and I never really thought of myself as someone who would write books per se, and suddenly there I was doing it.

With The Mandalorian specifically, I was part of the team that helped to bring the visual side of The Mandalorian to life from the very beginning. From the very first day of production, when we got Jon [Favreau]'s first scripts for the first season, I was part of the team and helping out right from when we hit the ground running, so I felt like I really needed to write this book. It's a product that I'm so passionate about and that we're all really passionate about in the art department. When you read the book, you'll see how a lot of the artists on our team say that this is their favorite project they've worked on in their whole careers. And many of them have had careers that have lasted for decades. So it's a project we all really love and really poured ourselves into and we had to. Being a television show, we had to produce more art for this show and do more design for this project than you would typically do for a film because there's just so many more hours.

StarWars.com: What is it about working on The Mandalorian that brings out that passion, both from yourself, then also the artists with whom you work who are featured in the book?

Phil Szostak: I think it's just a really special project. It all starts with Jon Favreau’s writing and ideas. It's got a freshness to it. It feels like the next logical step for Star Wars to me. And it was just exciting. We read those scripts and it was like, right out of the gate, Jon really gets it. It just felt really Star Wars and was so enjoyable to read. And it touched on so much of the legacy of Star Wars, as well.

Jon was folding in all these amazing characters and designs from Star Wars history and clearly someone who loves Star Wars as much as we all do, as all of our filmmakers do. And we just all dove right in from the get-go. Sometimes you read a script and right away you're just like, "Okay, this is great." You just know. And this was one of those cases.

StarWars.com: How would you describe the relationship between concept art and storytelling within Star Wars broadly?

Phil Szostak: In rereading the book and thinking back to my conversations with everyone, it just reminded me that Jon works in a way that's very similar to George [Lucas], as far as working with concept artists. He'll write a little bit and then he'll say, "Hey, I've got some ideas. Here they are. I haven't written anything down yet, though." And designs will be generated, concept art will be generated, fed back into Jon and that'll spark more writing ideas. It's a back and forth process and that's precisely how George worked with his concept artists.

It's a very symbiotic relationship between writing and art. And that's a huge theme in Star Wars in general. I think it's the perfect way to utilize concept art. It's more like, "I've got a vague idea." And some art comes along and that stimulates more ideas for the writing. It just seems to be the way it works best for Star Wars. I think part of the issue with Star Wars is that until a visual is put to it, it's really hard, I think, for the writers to wrap their heads around what they're trying to visualize with their story. Because Star Wars visuals are not like anything in our world. And so these artists really inject life into the story in a way that the writer would struggle to do alone.

StarWars.com: How do you approach actually making a book like this one?

And we also have a subset of art that we call our “designscape” or “moviescape” -- the greatest hits and the final designs for the whole season, in this case. So I had that to lean on, but then I also want to show the process and all the design. So it's just gathering a whole bunch of art and starting to put it into some kind of layout and also just creating an outline, stringing out what order I want the book to be in. For this one, it just seemed natural for it to go chapter by chapter through the episodes.

StarWars.com: What new insights can fans expect from this book?

Phil Szostak: Well, the thing I'm most excited about with this book is learning the story of how The Mandalorian came to be. It was really eye opening for me. I started to make all these connections during everyone's individual stories about how it all came together and realized that there were so many amazing coincidences that happened in order for this project to exist.

Like how Jon Favreau and Dave Filoni met on Skywalker Ranch in 2008 while Dave had been working in secrecy on The Clone Wars, which was about to debut that very year, and Jon was mixing Iron Man, which eventually became the MCU, his first film with Marvel at Skywalker Sound. For them to have met and for Jon then to do a voice for The Clone Wars because of that meeting, and Jon playing a Mandalorian in something that Dave Filoni produced. Then for Jon to have a live-action series and collaborate with Dave Filoni years later. This interweaving of these various amazing creatives, which eventually led to the creation of this show, I think is just a really cool story.

StarWars.com: What is your favorite image in the book?

Phil Szostak: Christian Alzmann did an image that's on page 104. It's a double page spread called “Mando Flashback Version 10,” and it's Din Djarin as a child holding onto the Mandalorian that's rescuing him with tears in his eyes. I watch movies for the emotional journey first and foremost. And I think that just cuts to the heart of what The Mandalorian as a show is about: a man who sees himself in the Child, someone who needs to be rescued, someone whose innocence needs to be preserved.

That's the flashback in “Chapter 3” of The Mandalorian that doesn't pay off fully until later in the season, but I just love what Christian did capturing that moment. We see really why the Mandalorian makes the choices he makes in this first season and why he connects with this child in a way that's unexpected. It's a powerful image and a powerful moment and I think it's the heart of what this series is.

StarWars.com: What are you hoping Star Wars fans take away from leafing through these pages?

Phil Szostak: I just hope that they have fun and enjoy seeing and understanding the process of concept art. I mean, it's great that they get to see the pieces that they do see at the end credits of the show every week, but I feel like hearing from the artists themselves and the insights of Dave Filoni and Jon Favreau will deepen their love and understanding of what the show is about and all the work that went into it. 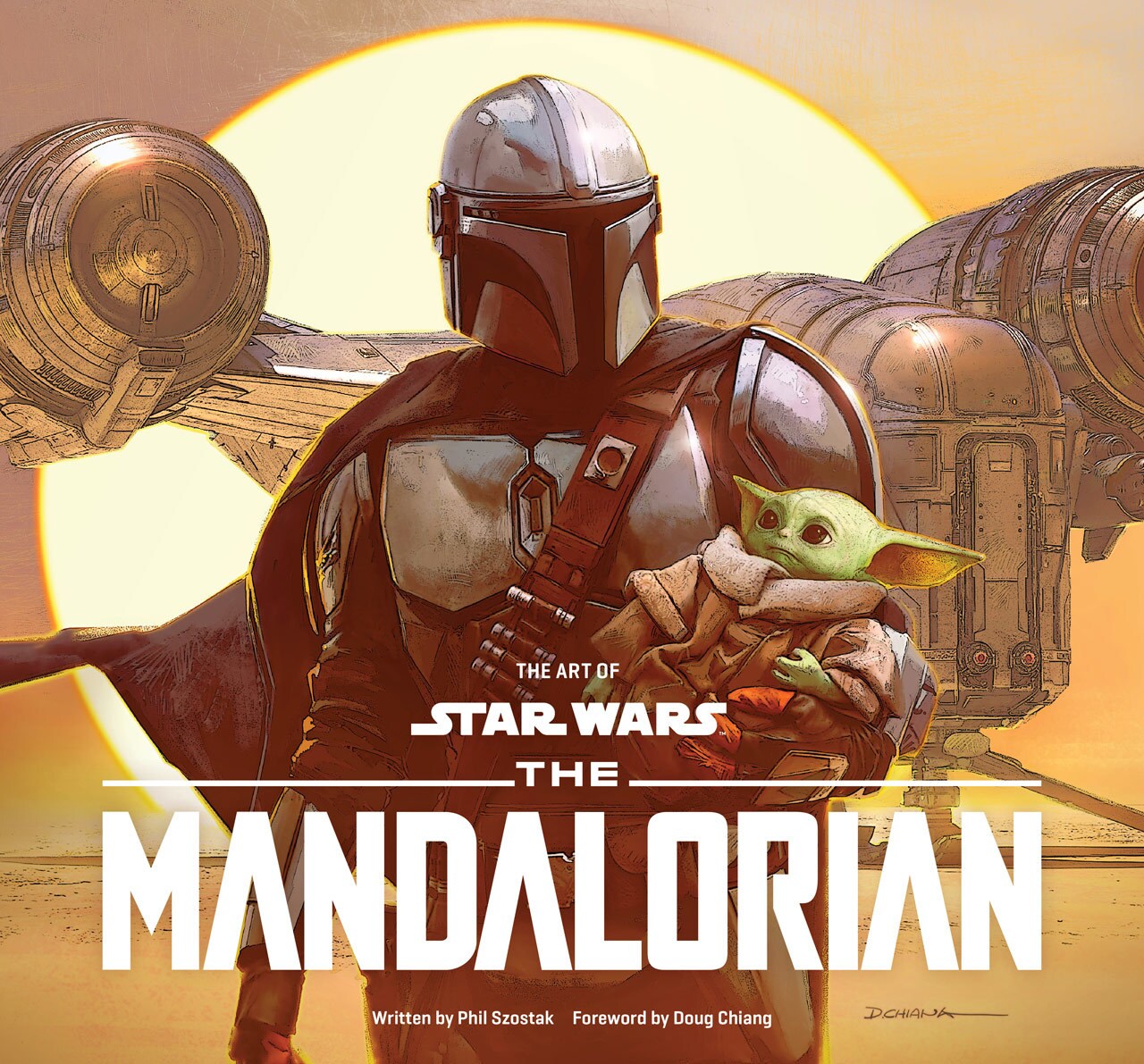 The Art of The Mandalorian arrives December 1 and is available for pre-order now.