Bags created in homage to Darth Vader, Boba Fett, and classic Stormtrooper armor are covered in Easter eggs, inside and out, delivering big on small design details.

“If you only knew the power of the dark side…”

When Jon Warren, VP of product design at Herschel Supply Company, and his team sat down to design the new Star Wars x Herschel collaboration, he knew it was the perfect time to incorporate his favorite design details from the costumes of the galaxy’s most captivating villains in Star Wars: The Empire Strikes Back. Darth Vader loomed large, along with the mysterious bounty hunter Boba Fett. And, of course, the gleaming white legion of Imperial stormtroopers would have to be represented.

But far more than just using the armor and color palettes for inspiration, Warren’s pieces speak to the most die-hard fans with a variety of patterns, quotes, and minute details that connect directly to the original costume design. The zipper pulls on one Boba Fett bag are braided in a nod to the embellishments cascading off one shoulder of his gear. The pinstripe stitching around Darth Vader’s chest plate has found new life on the exterior print of another bag. And the stormtrooper line salutes the gamut of armor and equipment represented by the Empire’s finest, with a variety of screen prints including one emblazoned with a thermal detonator.

To mark the release of the new line, StarWars.com recently sat down with Warren to take a deep dive into his favorite features, and nerd out about how the galaxy far, far away inspired him to become a designer. 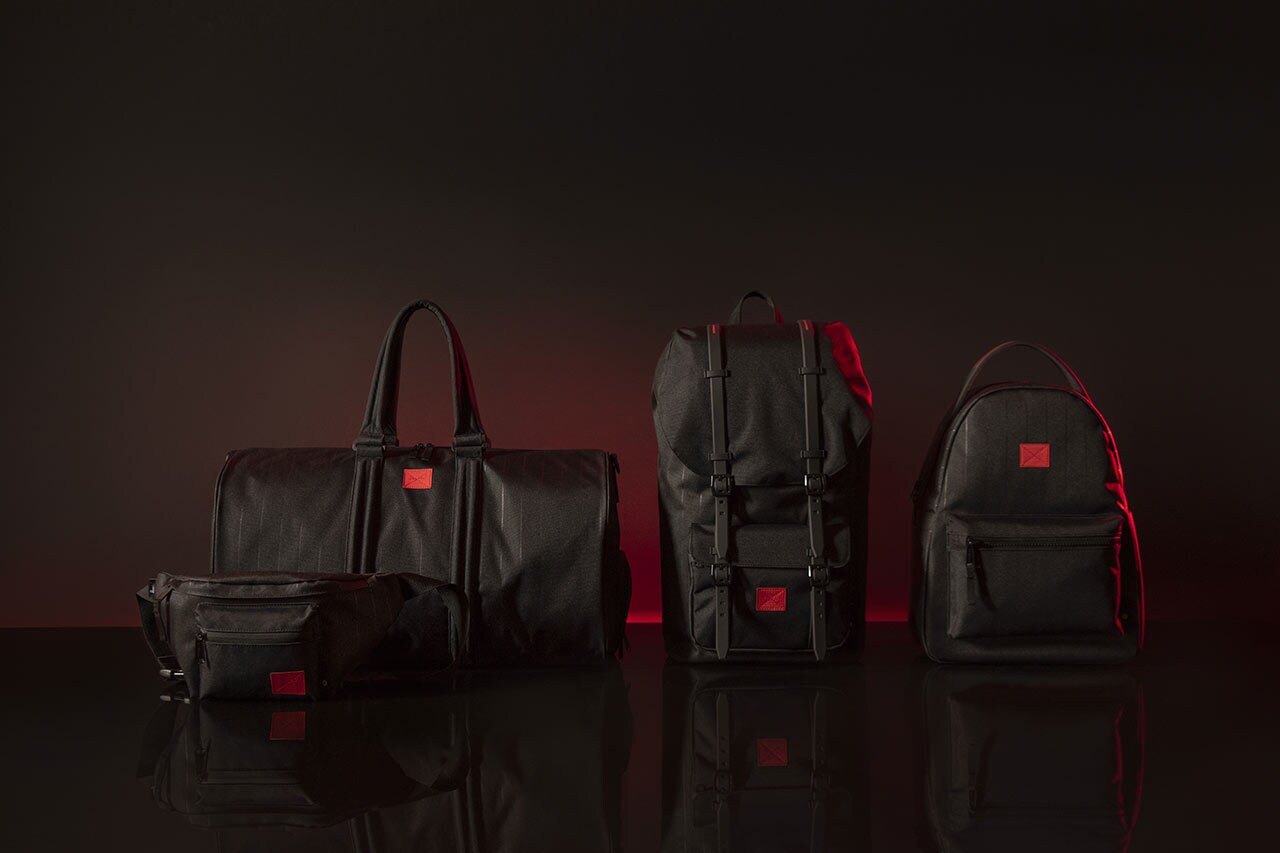 StarWars.com: As the first Star Wars x Herschel collaboration, when you sat down to begin designing the line, what were your must-haves for the collection?

Jon Warren: We wanted to work with the dark side and The Empire Strikes Back right out of the gate -- the villains are some of our favorite characters from the Star Wars galaxy. As designers, we see their uniforms as an extension of their story, so we decided to build designs off of what the characters wear and their equipment. We put in a lot of thought into this one. We’re product geeks and knew we had to [deliver] for the fans.

StarWars.com:  How did you stay true to the Herschel brand and aesthetic while incorporating those elements that were unmistakably Star Wars?

Jon Warren: When you think of Darth Vader, Boba Fett, and the stormtroopers, you immediately envision the distinctive gear they wear, which was a perfect jumping off point for the collection. When we began designing the line, we imagined what each character might use if they carried Herschel and pulled specific styles from our product range for each of them, so every set of bags is completely unique. A lot of us at Herschel are huge Star Wars fans. As kids, we would obsess over all of the different movie details, play with the action figures, and role-play these iconic characters so we had a lifetime of imagination to work off of. 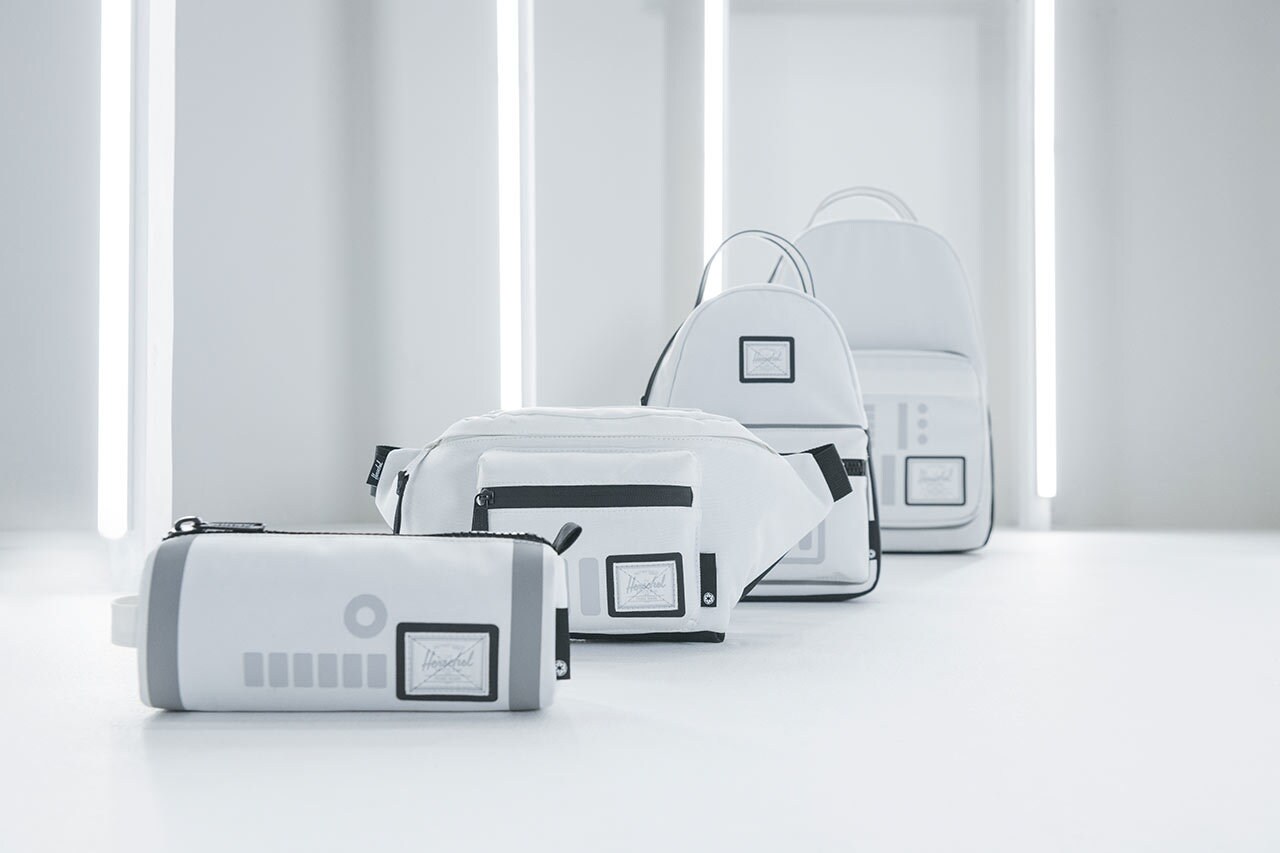 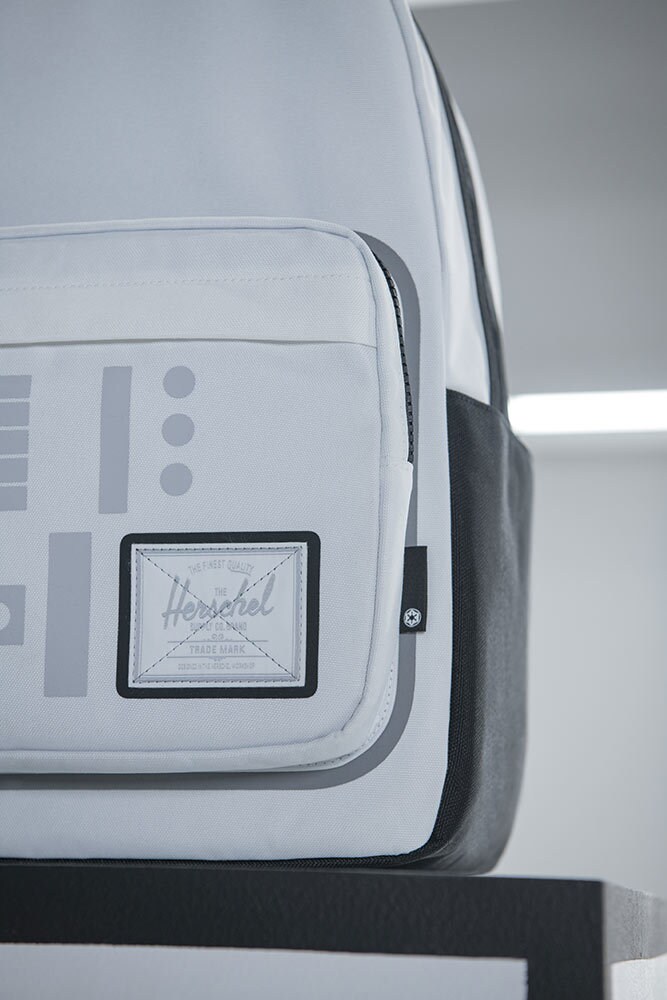 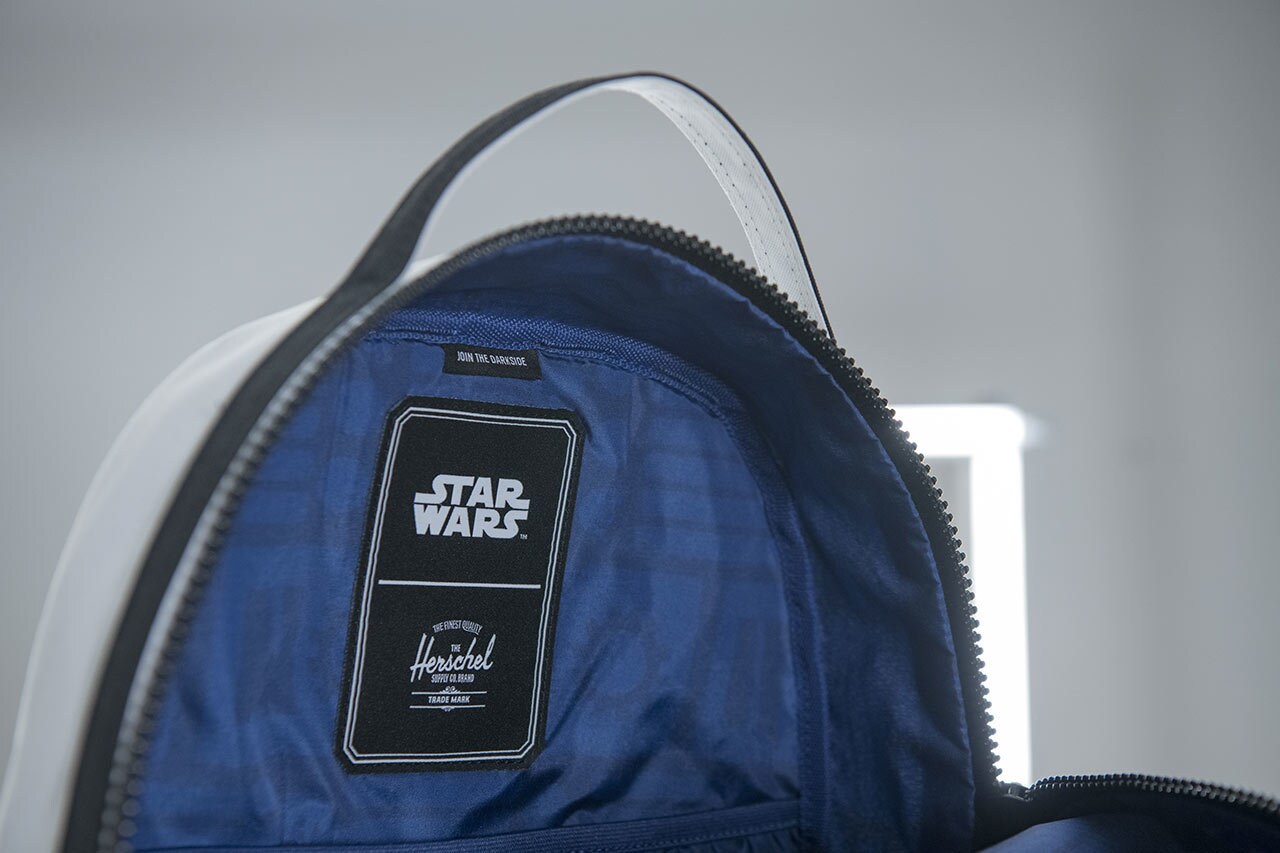 StarWars.com: Let's talk about some of those details in each character collection. The stormtrooper pieces are so crisp and clean, yet evocative of that classic white armor. I love the quilting detail on the straps in particular.

Jon Warren: Every bag in the collection has a cross stitch over a tonal version of Hershel’s signature woven label. This is a subtle nod to Darth Vader and Luke Skywalker crossing lightsabers. The stormtrooper is primarily white, but we screen printed different details of their uniform and equipment on the bags too. My favorite is the thermal detonator that we made out of our Settlement Case. If you’re in the know, you’ll recognize it immediately. 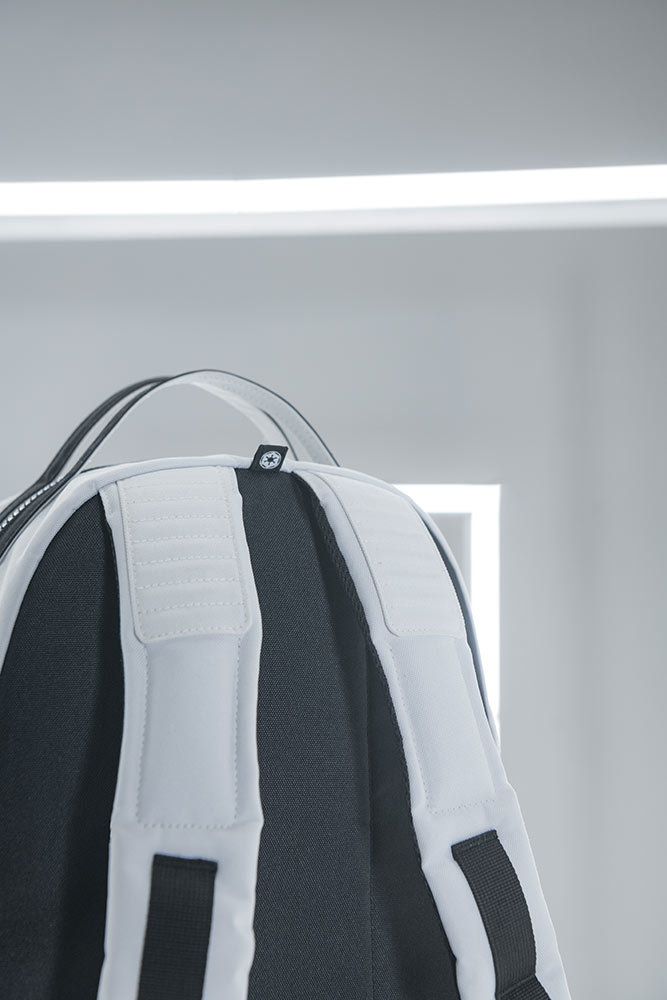 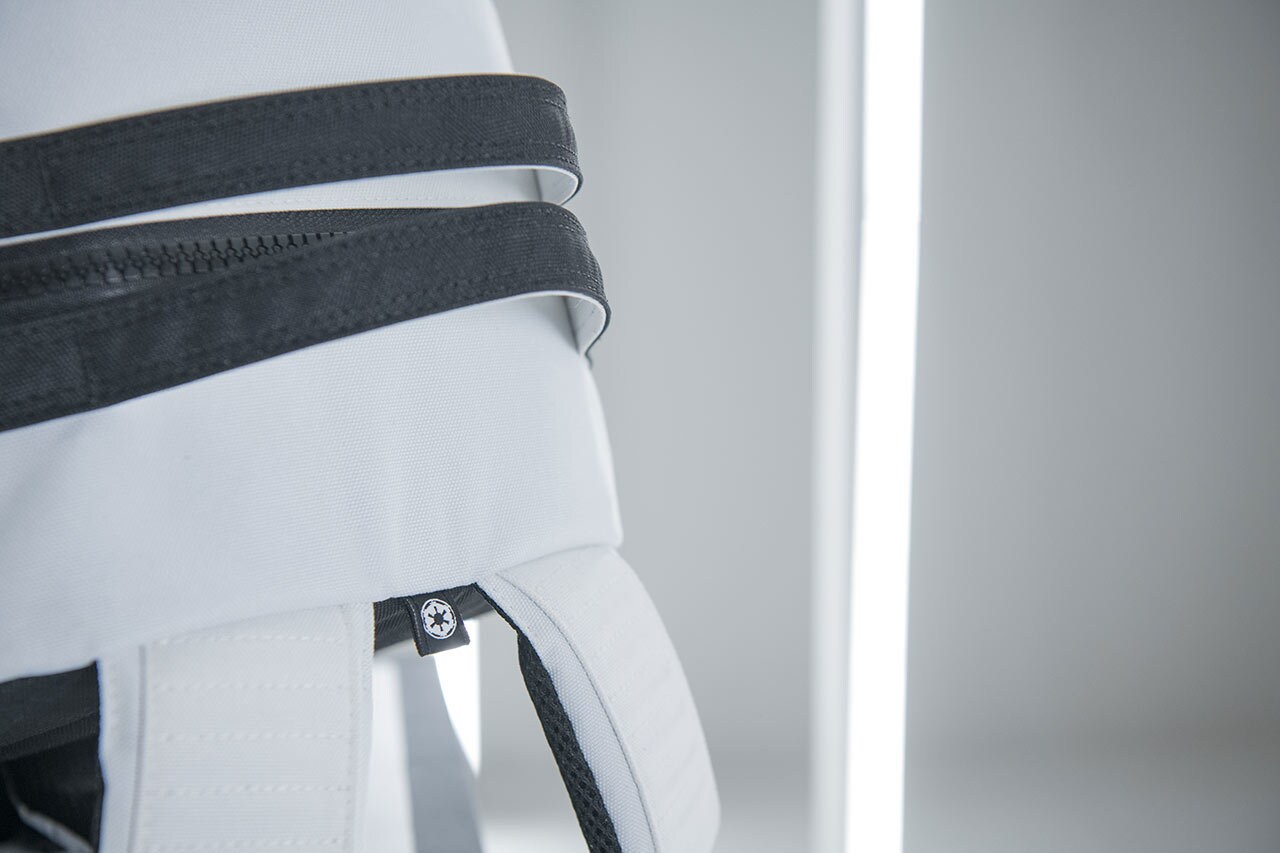 The shoulder strap panels on the Miller backpack were modeled after the way the stormtrooper’s chest plate attaches; when you wear the backpack, you get that hit of black.

The interior liner pattern is rendered with a custom pattern that takes cues from the armor. The color is a nod to the blue air filtration vents found on the stormtrooper helmet. 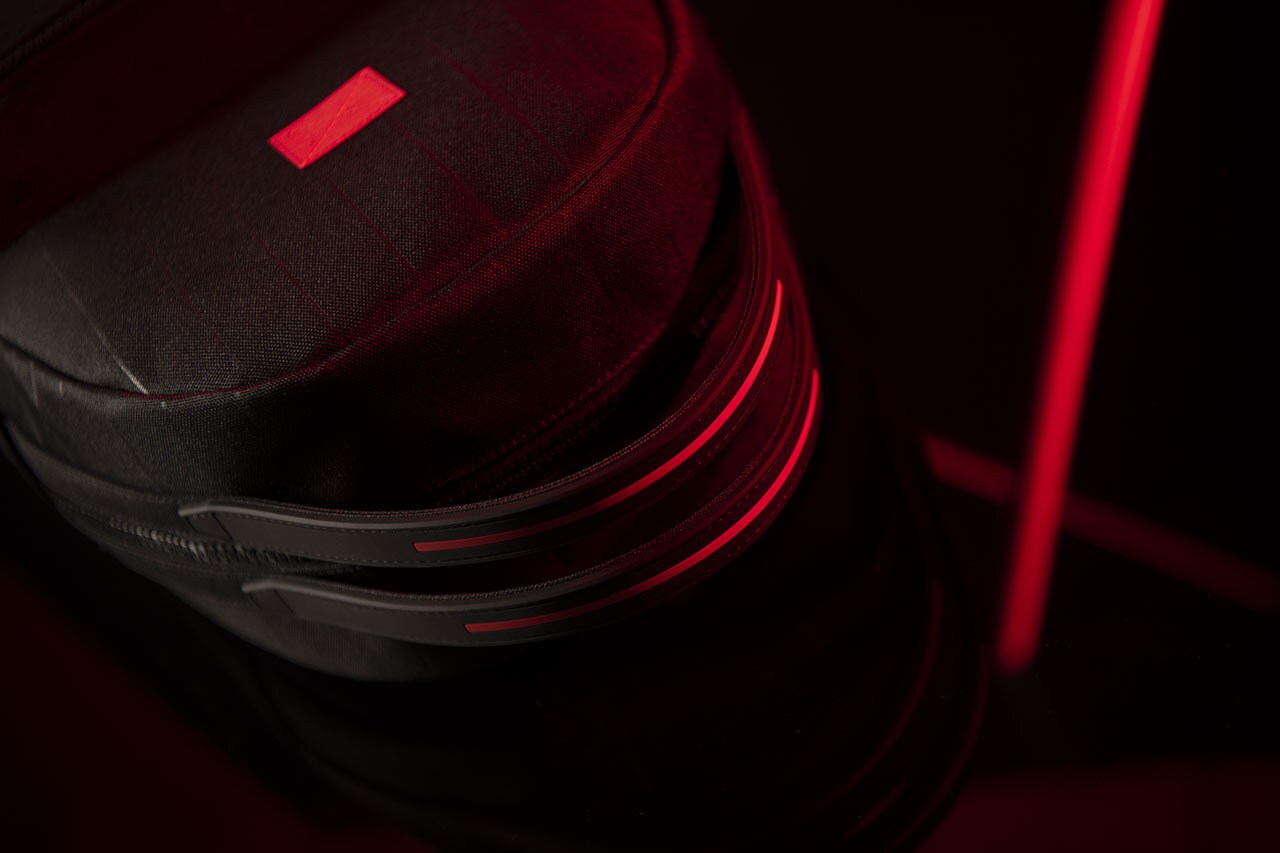 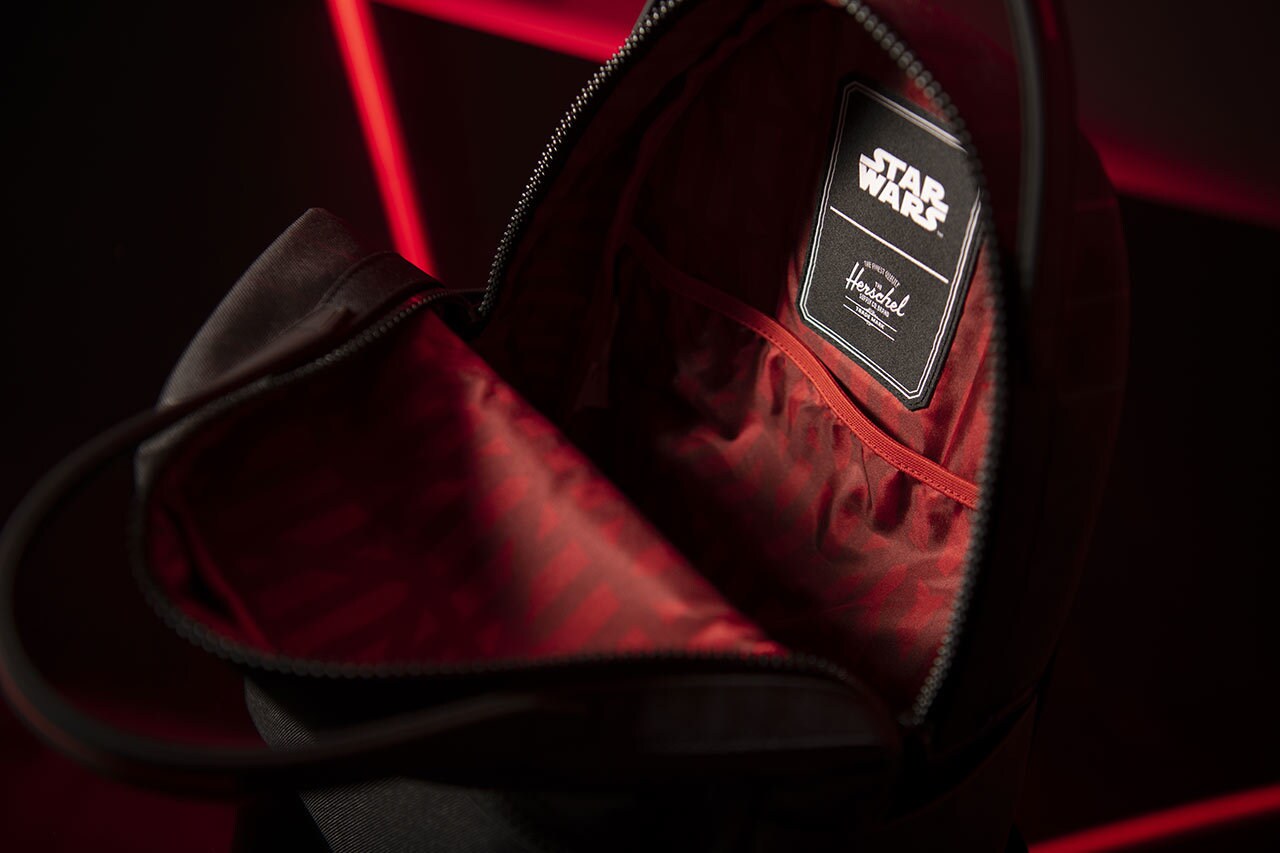 StarWars.com: The linings on your bags are always really fun prints. For Darth Vader, you went for what looks like a red Death Star lights motif and some of the pieces have a subtle pin striping on the outside.

Jon Warren: We went all out for Darth Vader. He’s the ultimate villain and might just be the most popular character in all of Star Wars. It was only fitting that we give him two of our most iconic bags -- the Herschel Little America backpack and Novel duffle. We opened custom rubber molding on all of the Vader bags to match his armor -- this is a particularly special feature since it’s completely unique to the collection. The red on the straps speaks to the red lightsabers used by the Sith. And the liner boasts another custom pattern inspired by the triangular grill on Vader’s helmet. Red is, of course, the color most associated with the Sith and the dark side. 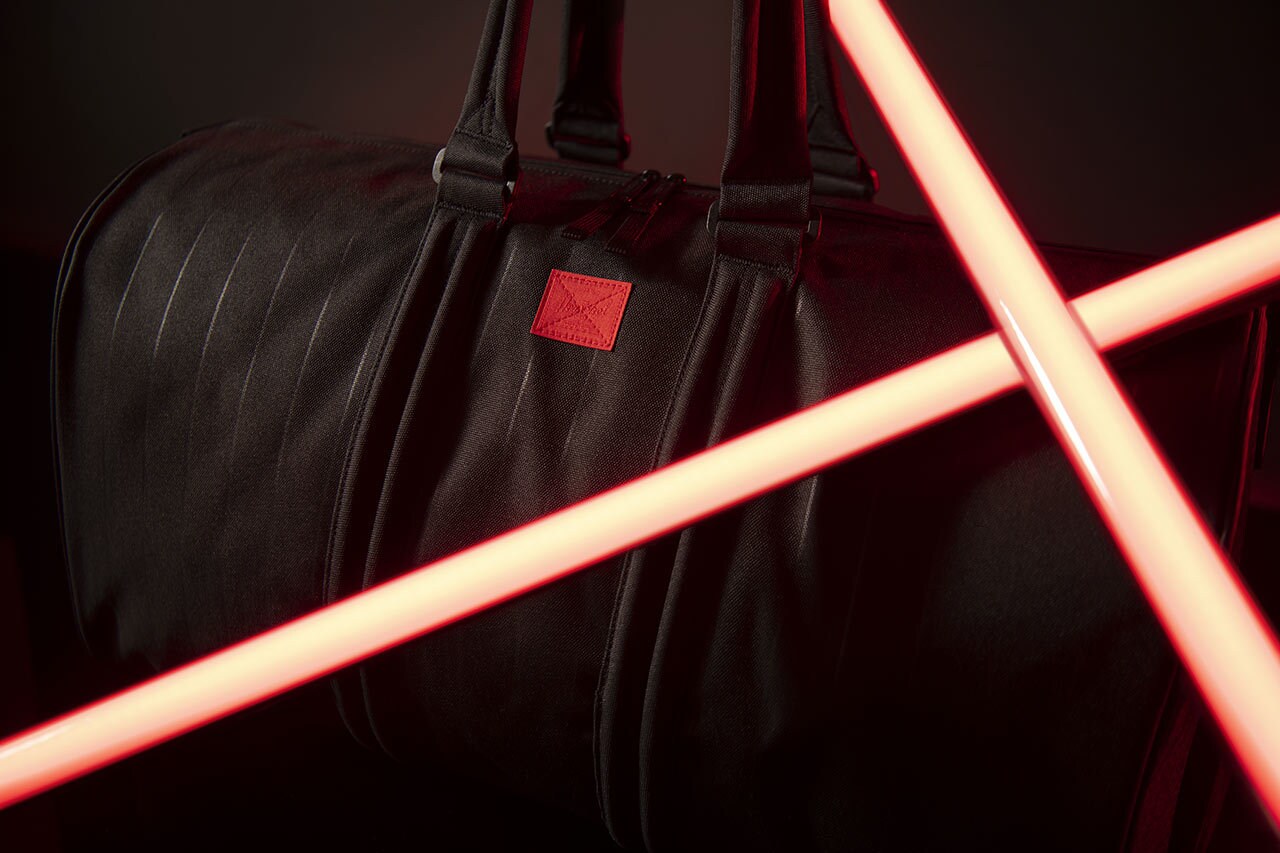 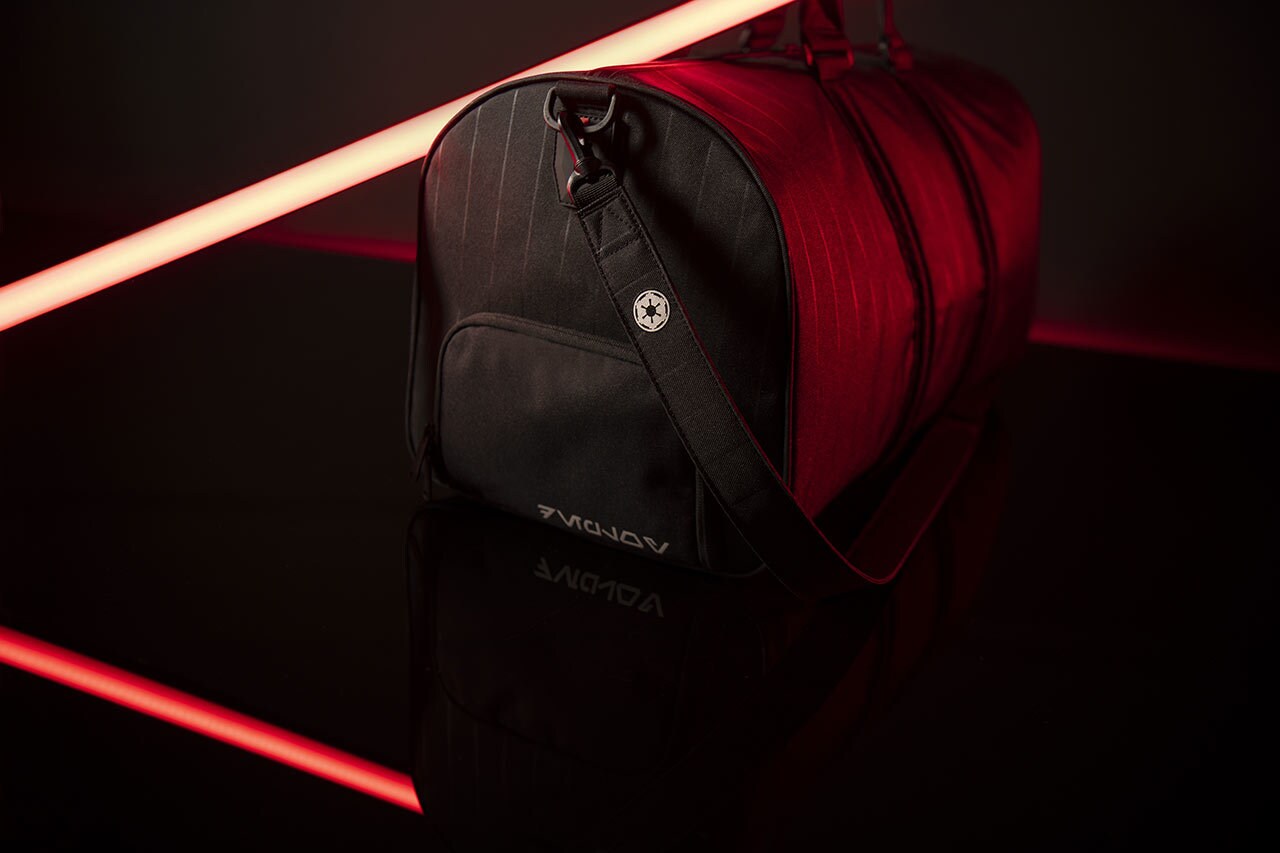 If you look closely, you’ll see that we used a heat transfer printing technique to recreate the pinstripe stitching around Darth Vader’s chest plate. It’s another one of those understated design details we wanted to include for the fans. We also wanted to do something special to reference Darth Vader’s cape. If you flip the Herschel Little America backpack and Nova Mid-Volume backpack over, you will see, screen-printed in Aurebesh, the word “DEPLOY.” And there’s a rain cover for the bag with a reflective Imperial Crest stowed away in a zipper compartment.

We added a small hidden detail behind the woven label located inside of the bags. The front of the label reads, “JOIN THE DARK SIDE,” but there’s a hidden quote behind the label specific to Vader. It reads, “NO, I AM YOUR FATHER.” It’s one of the most iconic quotes in the cinematic world and such a great twist in the film. We had to use it. 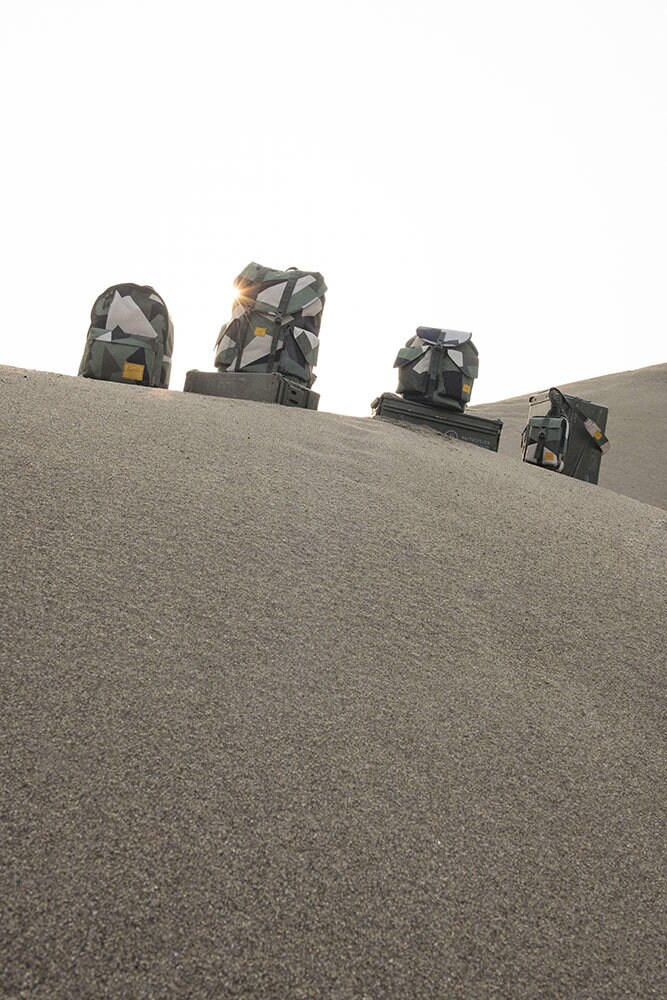 StarWars.com: And then there's Boba Fett! I love the abstract print using some of the colors that we associate with Fett's armor. It's very much an "if you know, you know" kind of piece at first glance that I could see would blend seamlessly into someone's existing wardrobe. How did you land on this more abstract print for this part of the collection?

Jon Warren: As a kid, Boba Fett was the coolest character in The Empire Strikes Back. My friends and I thought he was such a bad ass. His armor is so cool and as an old skateboarder that would frequently shop at army surplus stores, a custom camouflage print for his bags felt natural.

The camo was inspired by Boba Fett’s dinged up helmet. It reminded me of some vintage splinter cell camo I have. I wanted to do something military, but also unique to Herschel and Star Wars. I love all of the styles in the collection, but the Dawson backpacks are my favorite. We created external pockets to mimic Boba Fett’s cargo pockets -- a special design detail exclusive to these bags. 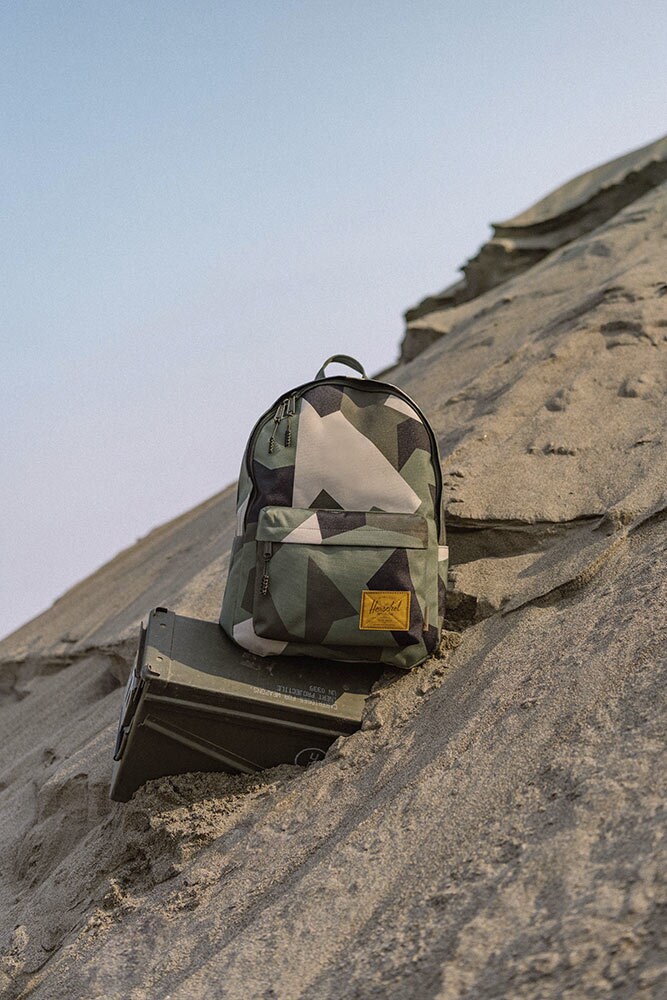 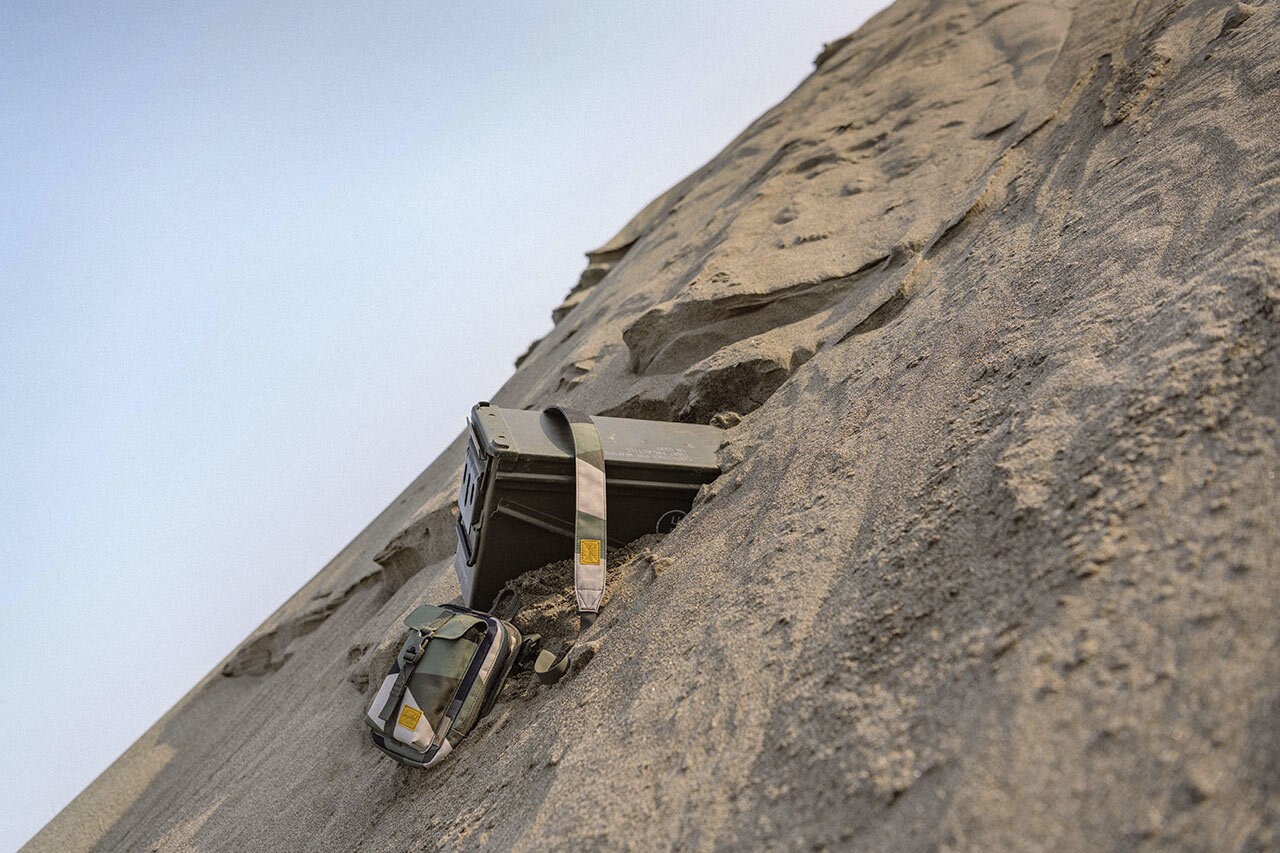 Another, darker, feature on the Boba Fett bags is the braided zipper pull you see throughout the collection. It’s a nod to the braids he has hanging off of his right shoulder in the film.

Like Darth Vader, Boba Fett also wears a cape and has a similar rain cover stashed away at the bottom of his Dawson backpacks and Classic XL backpack. His features the Mandalorian Crest instead of the Imperial Crest seen on Vader’s.

Boba Fett’s internal quote label says, “AS YOU WISH.” The interior liner print is a graphic play on his helmet and visor. The mustard yellow colorway is a reference to his knee and shoulder armor.

StarWars.com: Obviously, you are a huge fan based on all the thought and detail you’ve put in here. Can you tell us what Star Wars means to you?

Jon Warren: Star Wars made a huge impact on me as a kid. I saw The Empire Strikes Back in the theater and I was instantly hooked. George Lucas and his team created an entire galaxy with rich storytelling, compelling characters, futuristic vehicles, uniforms, planets, environments, and epic space battles. Everything was original and set my mind wild. As designers, we get to create our own world as well -- I try to channel that same type of creativity behind Star Wars into everything we do at Herschel. This collaboration was a chance for us to be a part of the Star Wars legacy, something that has inspired so many across different generations, young and old, and played such an important role in my and other people’s lives.

Associate Editor Kristin Baver is the author of the book Skywalker: A Family at War, host of This Week! In Star Wars, and an all-around sci-fi nerd who always has just one more question in an inexhaustible list of curiosities. Sometimes she blurts out “It’s a trap!” even when it’s not. Follow her on Twitter @KristinBaver.