Kylo Ren Rampages on Mustafar in the Star Wars: The Rise of Skywalker Novelization - Exclusive Excerpt

The dark warrior hunts for a wayfinder...and finds someone unexpected.

You've experienced the opening of Star Wars: The Rise of Skywalker. But not like this.

The novelization of Star Wars: The Rise of Skywalker arrives March 17, but it is no mere adaptation. Written by Rae Carson and available for pre-order now, the book features expanded scenes and content not seen in theaters, as well as a few surprises -- all culled from deleted scenes, never-before-seen material, and input from the filmmakers. In StarWars.com's exclusive excerpt, Kylo Ren tears through Mustafar hunting for a Sith artifact that could lead to Emperor Palpatine; but in a new sequence, he ultimately encounters a strange being protecting the desired device... 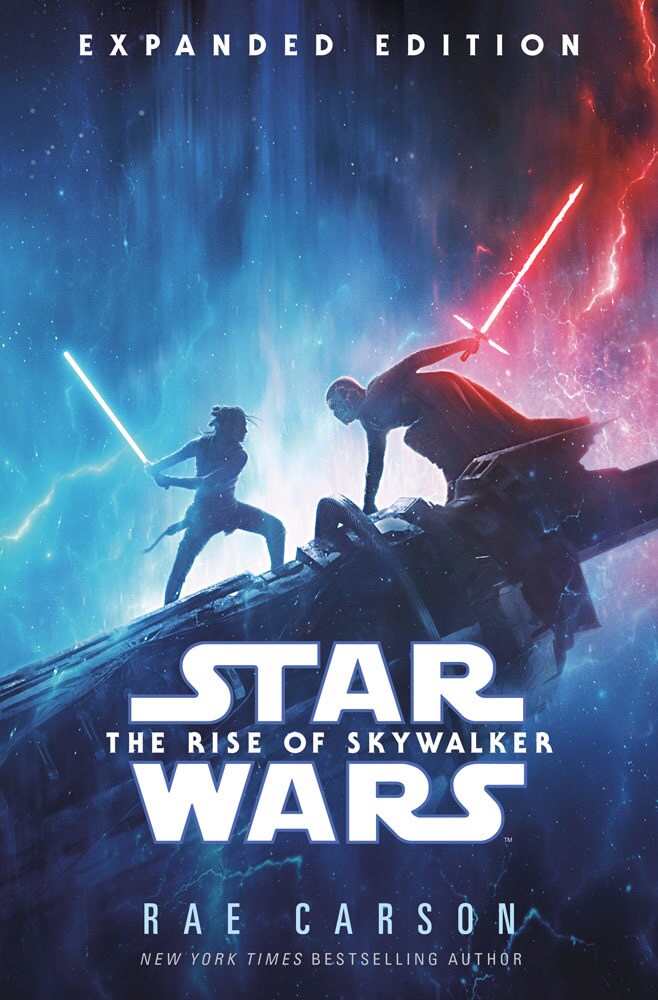 General Armitage Hux watched—from a safe distance—as Supreme Leader Kylo Ren and a squad of stormtroopers cut a swath of blood and destruction through the pathetic Mustafarian colonists. They battled through the gloomy woods of Corvax Fen, one of the few patches on this hellscape of a lava planet that was cool enough to support native growth, if you could call this “growth.” Barren trees grew out of a noxious marsh, and the air was hazy with mist. The barbarian colonists were failing to put up a decent fight; their ar­chaic halberds and broadswords were no match for the technical superiority of a good blaster, or even, Hux had to admit, a light­saber.

Ren was a blunt instrument, a mindless dog, whose current ob­session was putting all the First Order’s plans behind schedule. The general was half tempted to wade into the fight himself to hurry things along—just so they could leave this awful planet. Or at least he would be half tempted if his skills were not better used else­where. Best if Ren did all the dirty work; Hux was too valuable to risk.

“He’s almost beautiful to watch,” mused Allegiant General Pryde, standing tall beside him. The older man had arrogant blue eyes and a high hairline that seemed immune to perspiration, even in a hell-climate like this. “Don’t you think?”

Hux refused to gratify that with a response, because true beauty came from discipline, from order. So it was almost against his will that he found himself mesmerized as Ren met a barbarian’s charge head-on, cloak flowing, mist swirling around him. The glow of his lightsaber occasionally snagged on his cheek scar, making it appear as though a crack of glowing lava slashed his face. It was like some­thing out of a dream, or maybe a nightmare, as the Supreme Leader plunged his fiery crossguard into his attacker’s abdomen, lifted him from the ground, and sent him toppling onto his back. Kylo Ren did not spare his fallen foe a single glance, simply rushed forward into the woods seeking his next kill.

But there was no one left. Corpses littered the ground, barely more than lumps of shadow in the gloom. The air smelled of ozone and scorched vegetation. All was eerily silent as Ren looked around, catching his breath. Even from a distance, Hux could sense his dis­appointment that the killing was over, that no outlet for his rage remained.

Kylo Ren gathered himself and strode away into the woods, shoulders set with determination, lightsaber still ablaze. The myste­rious object he had come for—dragged all of them across the galaxy for—was nearly within his grasp.

“He’s gone mad,” General Hux said, and the contempt in his voice was obvious even to his own ears. “Flames of rebellion burn across the galaxy, and Ren chases a ghost.”

“No,” Allegiant General Pryde responded, softly but firmly. “Someone was behind that transmission. And Leader Ren will answer to no one.”

Hux narrowed his eyes. Ren would definitely answer to some­one, someday. He just didn’t realize it yet.

Kylo Ren showed mercy to nothing and no one, but he had a grudg­ing appreciation for things that struggled to survive. Even though the nearest lava flow was many klicks away, it seemed as though the air ought to be too hot, too chemical, for life to truly thrive here. As they’d landed, Hux had proclaimed the planet a “desolate hellscape,” and Kylo hadn’t bothered to correct him. The truth was, Mustafar was teeming with life—all connected through the Force. Like those hapless cultists he’d just killed, who’d been obsessed with protecting Vader’s legacy. Or this forest of twisted irontrees they endeavored to cultivate. Or even the extremophile organisms that swarmed the lava flows. All fragile but determined, mutilated but indomitable.

It was no wonder his grandfather has chosen this place for a home.

Kylo strode through the trees, lightsaber still ignited. Malevo­lence lay ahead, along with a darkness that had nothing to do with the planet’s day–night cycle. But that’s not why he kept his weapon ready. He refused to put it away because for the briefest moment, as he was hacking away at Mustafarians, he had sensed her. Watching him. Now his guard was up, and it would stay up until he got what he came for.

By silent mutual agreement, the stormtroopers who’d accompa­nied him had declined to follow him through the woods, which suited him fine. He preferred to be alone for this.

A few more steps and the ground became soggy. The mist thick­ened. A small splash indicated that his presence had been noticed. Finally, the trees broke open onto a small lake with brackish water, bordered on all sides by forest and large black lumps like boulders, jutting out of the ground at odd angles. No, not boulders, he noted upon closer look, but rather fallen remnants of Darth Vader’s cas­tle.

An oily film slicked across the lake’s still surface. But as Kylo ap­proached, the water bubbled up in the center, sending tiny waves to lap at his boots.

A giant emerged, a hairless creature sheening with wetness, bits of lake detritus clinging to its pasty skin. Its eyes were squeezed shut, but it could still see after a fashion, because draped over its massive bald head and across one shoulder was a second creature with long spidery tentacles. The two were locked in symbiosis. Kylo sensed the giant’s pain, as though it were a slave to the spidery being that clung to it. Yet neither could it survive alone.

The spider creature spoke. “I am the Eye of Webbish Bog. I know what you seek.”

The Eye cocked its head, making an eerie squealing noise. It took a moment for Kylo to realize the creature was laughing at him. “No need for that,” the Eye said. “Do you really think my lord would have left it in the guardianship of one who could be swayed by a trick of the Force?”

No, he supposed not.

“You’ve been seeking it for a while, yes? I must warn you, our fiery planet burns away deception. If you proceed down this path, you will encounter your true self.”

Kylo was growing impatient. He glared in silence.

“Fine,” the creature said, as though disappointed that Kylo would not indulge him in ceremony. “In accordance with Lord Vader’s wishes, you have defeated my protectors and earned it. His way­finder.”

The blind giant beneath the Eye raised its enormous hand from the water and pointed toward a small island in the lake. On it was a stone structure, like an altar.

Kylo turned off his lightsaber and hooked it to his belt. He waded into the shallow lake, soaking his boots and cloak. The water was warm, and the ground beneath the water a sludge that sucked at his feet. He ignored it all, reaching for a pyramidal object. It fit satisfy­ingly in his hand, heavy and hot, and he stared at it a moment, lost in its red glow. The sides were etched glass framed in deep-gray resin. The crimson light within seemed to pulse faintly. Ren had come a long way for this, and yet he hesitated, eyeing the pyramid with distrust.

“It will guide you through the Unknown Regions,” the Eye said. “To the hidden world of Exegol. To him.”

Whoever he was. The transmission purporting to be from Palpa­tine had reached the far corners of the galaxy. Kylo had it memo­rized:

At last the work of generations is complete. The great error is corrected. They day of victory is at hand. The day of revenge. The day of the Sith.

He wasn’t sure what to believe about it, but it was a fair guess that Kylo wasn’t the only one seeking answers. Others would follow the same path and come to Mustafar sooner or later, looking for this exact object.

So surely his grandfather would have made it harder than this? Those cultists were too easy to kill. This creature too easy to con­vince. Then again, he was Vader’s heir. The object belonged to him.

Now that he had it up close, the etchings in the glass clarified into patterns. Star charts. Alignment markers. Something stirred deep within him, suggesting ancient knowledge and power, and he felt a rush of triumph. It had all been worth it—diverting ships, sending out spies, tracing old records, enduring the smug disap­proval of that idiot Hux—all to find this.

Kylo looked up, and was startled to discover that the Eye of Web­bish Bog was gone, slipped back beneath the surface of a lake so still it was as though nothing lived within it at all.

How long had he been staring at the pyramid?

Kylo Ren wasted no more time. Dried blood made the skin of his face itch, and his boots and cloak were soggy with lake water, but instead of returning to his command ship, the Steadfast, he dis­missed everyone back to their regular duties and jumped into his modified TIE whisper to make the next part of the journey alone.

He connected the pyramid to his navicomputer, attaching ports where indicated by the glass etchings. The nav interface lit up with new information, but it also blared a warning.

For these coordinates would take him beyond the Western Reaches into the Unknown Regions. Kylo overrode the warning and jumped his TIE to lightspeed. The stars turned to streams of matter.

The Unknown Regions remained uncharted because a chaotic web of anomalies had created a near-impenetrable barrier to explo­ration; only the most foolhardy or desperate ventured there—criminals, refugees, and, if the reports were true, remnants of the old Imperial fleet who had refused to accept New Republic rule.

A few planets had been discovered, but their populations re­mained small, and their trade with the rest of the galaxy had been throttled by the navigational risk. The Sith and the Jedi had found paths through to even more dangerous, more hidden worlds—or so legends said—and the specific, carefully stepped coordinate jumps required to safely navigate the anomalies were among their most closely guarded secrets.

The trip would be worth the risk. Someone was out there, claim­ing to be the Emperor himself, and Kylo could already sense ripples of doubt in the First Order. After all he’d done, after all he’d sacri­ficed to become Supreme Leader . . . who would dare to challenge him now?