This amazing Han-and-Leia cosplaying duo talk to StarWars.com about their fandom and much more.

Naomi Brett Rourke and husband Tim Guest were intrigued by Star Wars from the beginning.

“When it originally came out, I was going around to all my friends saying, ‘Oh my gosh, I have to see that movie,’” says Naomi. Her friends, however, had about as much enthusiasm for this new space epic with laser swords and walking carpets as Luke Skywalker does for cleaning up droids. “I said, ‘No no no, that’s going to be a great movie.’ And it was, and I was so grateful that I could tell my friends that afterward.”

“I remember in ’76, before it came out, I was with some friends in the Bay Area,” says Tim. “They were going, ‘There’s this guy up in Marin County, and he’s making this sci-fi movie for 10 million dollars.’” Tim and his friends couldn’t believe the budget, thinking it “a huge amount.” But they looked forward to what this NorCal filmmaker was cooking up. “And then, of course, in July of next year we saw it and were like, ‘Well, that’s money well spent.’”

StarWars.com met Naomi and Tim in front of the stormtrooper exhibit at San Diego Comic-Con last month, their incredible General Leia Organa and Han Solo cosplay impossible to ignore. “We decided to start cosplaying after we saw The Force Awakens,” Tim says. 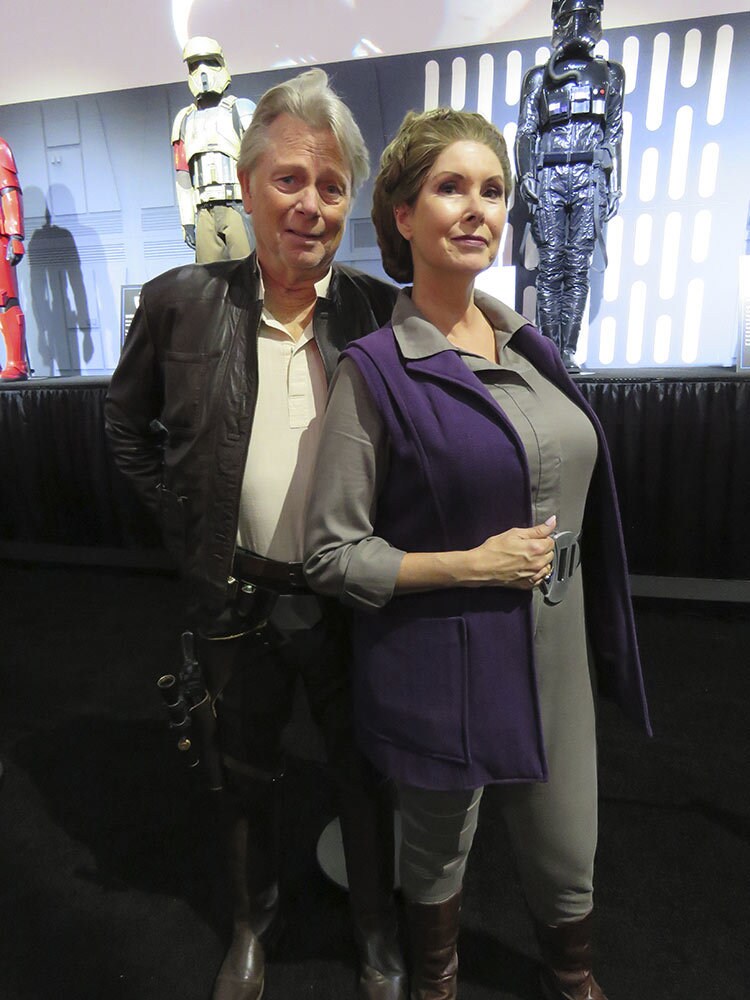 Naomi and Tim worked on their costumes for about a year, researching fabrics and design before having the outfits made. Just before they were to debut the costumes at a convention, however, Carrie Fisher passed away. Naomi decided she wouldn’t dress as Leia, her favorite character, out of respect -- it was too soon. Tim, however, thought she should, and convinced Naomi to do it. “I had people crying on my shoulder,” Naomi says. “It was cathartic. So I’m glad he talked me into going.”

Indeed, both Leia and Fisher have powerful legacies, and have had a lasting impact on Naomi since her first Star Wars viewing. “There was something about Carrie Fisher,” Naomi says. “She was my hero from then on. She was great. I think most girls who grew up in that time period wanted to be her.”

Today, Naomi, a member of the Rebel Legion fan group, and Tim, on his way to becoming one, love Star Wars as much as ever. But don’t get this Han-and-Leia pair started on their movie son. “Ben has been a disappointment to his mother,” Tim says.

“Bad-boy Ben,” Naomi says. “I think we were doing rebel business and missed a birthday or something.”

Naomi: “I am your father!” That was great. And the entire theater did a collective “[Gasps].” You know, it was wonderful.

Tim: The first time we went to lightspeed.

Naomi: Oh, are you kidding? The Resistance, come on.

Tim: I’m with the Resistance.

Naomi: Oh, the Millennium Falcon, absolutely. That thing is awesome.

Naomi: Chewie, ‘cause he’s cuddly. You could cuddle up next to him, and I’m cold all the time. It’s like a big blanket.

You’re dressed for the part.

Naomi: I’m dressed for the part, I want to be that person. I’m there.

Tim: X-wing pilot would be a lot of fun.