See BB-8, Shakespeare-Style, on the Cover of The Force Doth Awaken - First Look!

The astromech goes Elizabethan in a fun, beautiful illustration.

Ian Doescher's Star Wars and Shakespeare mashups have proven to be hits with classic literature and Star Wars fans alike -- telling the stories of the Star Wars films in the Bard of Avon's style, while staying true to both. As a series, it's simultaneously weird, smart, and original, all qualities that ring true to the galaxy far, far away and the work of the world's greatest playwright.

Each installment has also sported a beautifully illustrated cover, and StarWars.com has an exclusive first look at the image set to grace the next edition: William Shakespeare's The Force Doth Awaken -- Star Wars Part the Seventh, coming October 3, which features BB-8 in Elizabethan garb. (It's an image we didn't know we needed in our lives until we saw it.) In addition, StarWars.com caught up over e-mail with designer and art director Doogie Horner and illustrator Nicolas Delort to find out how the cover came to be. (Or not to be?) 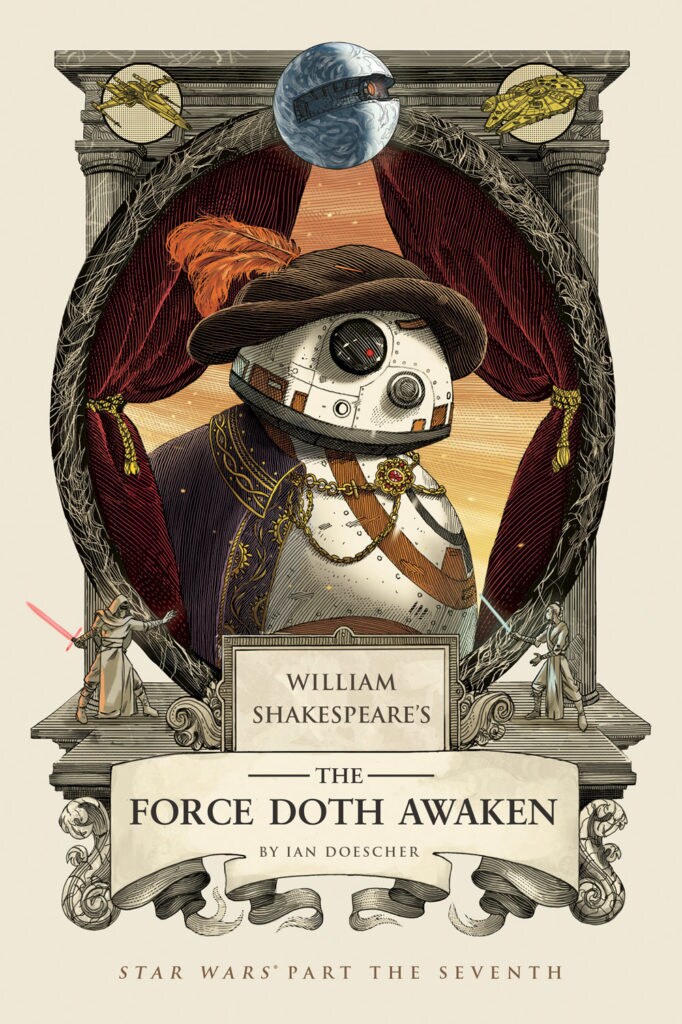 StarWars.com: BB-8 in the Shakespeare hat and cape. Brilliant. Please explain how that came to you.

Doogie Horner: Well, it was sort of a process of elimination. We considered Rey, but one distinctive thing about her is her outfit, which we'd lose when we dressed her in Elizabethan clothes. I just can't picture her character in a fancy dress. I also considered Kylo Ren, but again, I just didn't know how to make him look Shakespearean in an interesting way. BB-8 seemed like the right fit because he's such a fun character, and this book is funny, too. Also, I like giving a supporting character star-billing like this.

StarWars.com: Does Star Wars design lend itself to this style of illustration? Or did it take some craft to make it fit?

Nicolas Delort: A lot of the designs in Star Wars already lean heavily towards fantasy, rather than science-fiction, so it's just a matter of finding a way to add some comedic or tongue-in-cheek element to them. Imagining on-stage contraptions to replace the advanced technology is another fun part of the job.

StarWars.com: Your cover is really striking in both its detail and also a kind of sense of humor about itself. How did you approach the illustration?

Nicolas Delort: Out of all the covers in the series, I'd say it's the one that leans more towards comedy. BB-8 is such an adorable character, giving him this Elizabethan attire just makes him look funny.