The illustrator on infusing postage with the power of the Force, including fuzzy porgs, Supreme Leader Snoke, and other Star Wars icons.

In an homage to a legacy of richly illustrated movie posters, the 2017 Royal Mail Star Wars stamps are tiny works of art filled with hidden treasures and intricate details.

Yet when artist Malcolm Tween started the top secret project digitally painting the postage-stamp portraits of eight characters, including a few from Star Wars: The Last Jedi, more than a year ago, he knew very little about some of the new characters. “So when the porg turned up, that was quite a surprise,” he says. Beyond capturing the innocent blank eyes of Ahch-To's indigenous avian creatures and the craggy face of the First Order's Supreme Leader Snoke, Tween helped find the balance between the character featured in each stamp and an array of ships, vignettes, and other tiny details in their midst. Look closely, and you may even see where he's hidden a Jawa.

Recently, Tween sat down with StarWars.com from his studio in Bournemouth, on the south coast of the United Kingdom, to talk about his favorite Tatooine scrappers, the challenges of keeping his work under wraps, and having his stamp collection approved by the Queen.

Tween, as a partner in the illustration studio Digital Progression, has been designing the Royal Mail's Star Wars stamps since 2015, working closely with Lucasfilm and London-based design agency Interabang. But when it came to capturing the look and feel of the stamp series, Tween looked to legendary Star Wars poster illustrator Drew Struzan for inspiration.

“Lucasfilm has this amazing tradition of having lots of illustrative posters,” Tween says. “The legacy is fantastic in Star Wars posters...all the montages and scenes and backgrounds. So I think it's kind of wanting to pay a little bit of tribute to that.”

Struzan was, as it were, also tapped for a 2007 series of American Postal Service stamps. “I mean, that's quite a good honor to be in the same company as Drew,” Tween says. Still, at times the task was also daunting. “No pressure,” Tween jokes.

Beyond the storied history, Tween's work on such a high-profile and ultimately utilitarian series also meant his illustrations would reach far beyond the eyes Star Wars super fans. “Loads and loads of people have seen them,” Tween says. “You see people putting on social media just randomly, 'Oh, I went to the post office today and I got Star Wars stamps!' Or 'I got a letter today and it's got a BB-8 stamp on it. How cool is that?' So it's got this really broad appeal, this fantastic kind of natural spread of the Star Wars magic to places where you wouldn't expect it really,” he says. “It's this natural organic thing where it's just out in the wild and people are seeing them and responding to them. It's brilliant.”

It's rumored that the Queen herself even looked at Tween's work, as part of the process of approving official currency and items with her image emblazoned on them, he says. “So she's probably actually approved these Star Wars stamps. It may be the only bit of Star Wars merchandise approved by the Queen. I'm not sure if it's true but that's what I'm led to believe.”

And while there's been no word from Buckingham Palace as to how she feels about Ahch-To's space puffins, Tween feels confident that she might be a fan. “She might be, she might be,” he jokes. “I think she's Team Porg.”

Like most people working with Star Wars today, Tween started out as a fan first. “I don't think you can work on it unless you're a fan. I was six when it came out, so it was my childhood.” 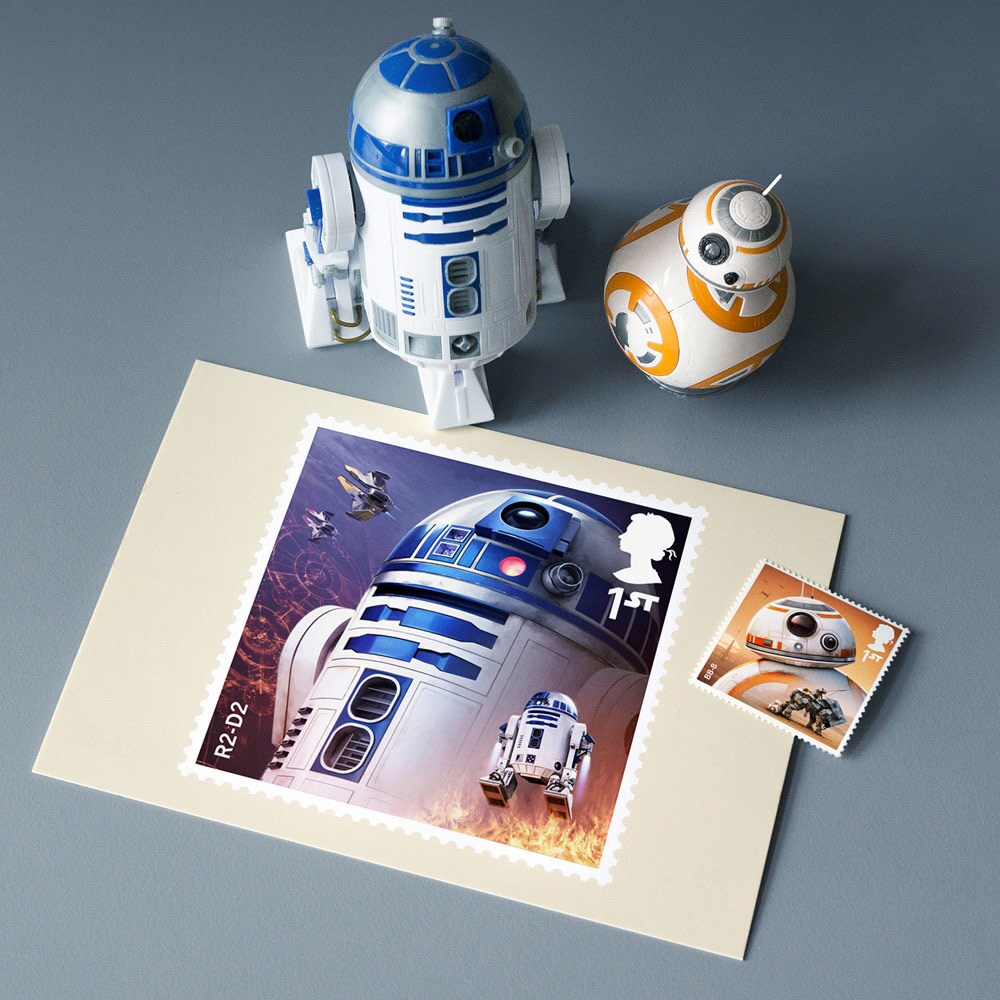 In fact, it was the galaxy far, far away that sparked his imagination to dabble in illustration. “I was an obsessive Star Wars fan when I was a kid. I think I actually re-drew the entire stories of the first three films as little comic books when I was a kid. They're probably in a box somewhere.”

Tween later trained as a technical illustrator, honing his patience for the painstaking art of fine detail in cut-away illustrations of tanks, cars and rockets. “But really I wanted to be drawing robots and spaceships and that kind of stuff.”

Tween had already worked with Lucasfilm on official illustrations and licensing work when the Royal Mail came calling. “They literally just phoned up and said, 'We've got a top secret project. Would you be interested in working on a new Star Wars project that we're not allowed to talk about yet?' And I didn't even know it was for the stamps at that point.” The answer was obviously yes.

Each stamp is its own masterpiece, but the collection also has to work in concert. “One of the things we definitely tried to do was give each stamp their own kind of color space so there's a separation amongst the set, that each one stands out on its own merits,” Tween says. “There's technical reasons why we do that also, but just visibly to make it work as a set and give that overall balance. Everything's tonally a little different...We try and develop it early on in the design process so we know how to whole set works as a whole as we're going along. That's really quite important. Because it's got to work as a set just as well as individual stamps.”

Characters that Tween has known and loved for decades, like Artoo and Chewie, are easier to capture in illustrated form. “You have kind of an emotional attachment to those characters, so you know exactly what they represent.”

But for the nefarious Snoke and the humble porg, Tween's only reference materials were concepts and glimpses provided from production. “I think until you see them in the context of the film, it's really difficult to get an idea of what they're going to be like...We have some reference to work from obviously, but we don't have a lot,” Tween says.

For the Supreme Leader, designers knew reds would dominate the color palette, but little else was confirmed about the character beyond what could be gleaned from the towering hologram in The Force Awakens. “It is a challenge, even down to the coloration of his skin and stuff like that. Sometimes the reference we have is unfinished renders and things like that so we haven't got a huge amount to go on...I don't know how tall he is still,” Tween says.

It was important for Tween to capture Snoke's beady eyes, bloodshot and piercing in a wash of crimson hues. “Particularly, the lighting and the color palette, we're trying to portray him in a certain way. A bit shadowy, a bit sinister. Not to scare the kids off on the stamps, but we have to give clues that he's probably not on the good side of the spectrum.”

The porg color palette was influenced by the emerald greens and gray tones of Luke Skywalker's island refuge at the end of The Force Awakens. “That's the only context we have to the porg as of now,” Tween said of imagery available at the time he created the image.

Amid the intricate details of each wrinkle on Maz's face and the many individual hairs covering Chewbacca's carpet-like mane, and you might catch some Easter eggs hidden within the designs.

The logo marking them as First Class utilizes the font from the iconic Star Wars logo. 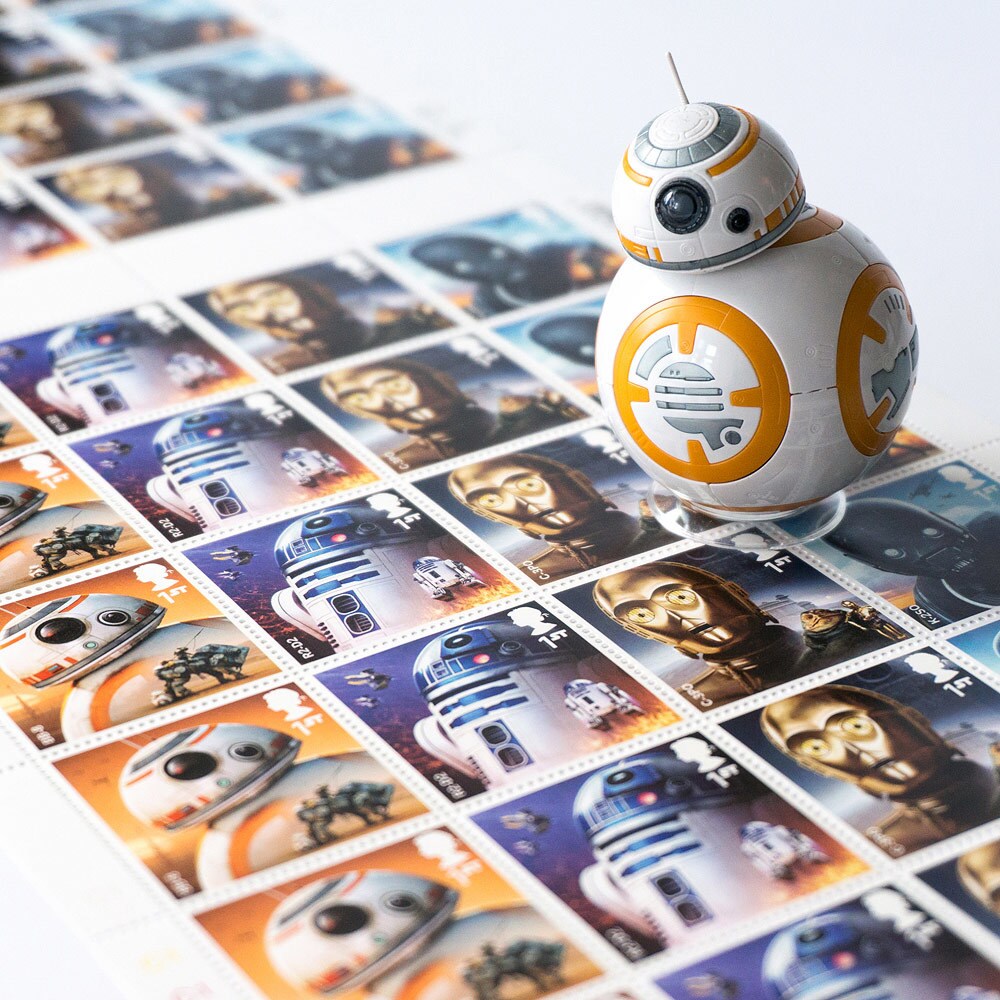 In keeping with earlier stamps that had the mark of the Rebel Alliance or the Empire hidden in UV-sensitive ink, the eyes of the four droids in this series light up under the right conditions. “If you put them under a UV torch, there's actually stuff hidden in the stamps,” Tween says. “So that's pretty cool.”

Tween also had some fun with the backdrops, dropping intricate ships into the background and, after his hopes of dedicating an entire stamp to the Jawas were dashed, hiding one of the pint-sized scavengers with one of their captives. “I did actually hide a Jawa in the R2-D2 stamp. It's quite small and I think it may have got cropped off a bit in the final cut,” Tween says. “I managed to sneak one in, so he's hiding in their somewhere.”

Officials at Disney and Lucasfilm help guide the process, which can take nearly two years from initial concept to final approved creation.

“It's just really exciting, because you get this stuff through and it's like, 'Oh! This is new Star Wars stuff!' There's very few people who have seen this stuff...and to see the process that's happening, you get little clues of what's coming up.”

The actual illustrative work on each stamp takes Tween a solid week, although a series of behind-the-scenes videos (seen throughout this article) condense the highlights of the step-by-step process.

It's time consuming to paint individual strands of hair on furry faces and perfect each tiny panel on droid's cursed metal bodies. “There's always a challenge. I think you get in the zone with it. You kind of get into a rhythm. It just takes time making sure all the details are correct. Especially with anything technical, like robots or spaceships, very specific things  need to be correct, so it's just taking that time to get everything right.”

Then there are revisions, changes, and approvals. All the while, he stays mum to friends and family. When Tween illustrated his first Star Wars Royal Mail series in 2015, their release was heralded by excited friends who didn't realize he was the artist behind them. “It's brilliant because they're out in the wild and actually when the first set got released, a lot of my friends, they're kind of posting all this stuff. 'Oh my god, have you seen the new Star Wars stamps?' And it's like, 'Yup, I've seen them.'”

Last year's project was a little harder to keep from friends. “They knew I was doing something top secret,” he says. But when asked if it was more stamps, Tween had to try to maintain secrecy. “I have to say no and I have to say it in a convincing way so everyone believes it. You've just got to keep quiet and don't give any clues.” Which begs the question -- will there be a 2018 collection? “I couldn't possibly say,” Tween says. But with half a collection already devoted to droids, he would love to see more of the mechanical characters nab a stamp-sized spotlight, including the boxy GNK power droid. “I think they've been really well received. There are still a million characters you could choose,” Tween says. “I'm not sure it's popular enough to get one, but that would be my vote. Vote for Gonk!”