The creators of the new Apple Arcade mobile game speak to StarWars.com.

If you were a LEGO Star Wars character, who would you be? That question lies at the very heart of LEGO Star Wars: Castaways, an online, action-adventure mobile game available now on Apple Arcade and playable across iPhone, iPad, Mac, and Apple TV. In LEGO Star Wars: Castaways, players build and customize their own in-game LEGO minifigure character, who they’ll use to visit a mysterious new planet, meet and team up with friends (other "Castaways"), race Microfighters, and experience classic Star Wars moments. There are puzzles to solve and battles to fight, as well as a strong social component, as players can meet with friends in the Social Hub and communicate through LEGO emotes. In other words, there’s a ton to do, and there’s never been a LEGO Star Wars game like it. To mark the game’s release, StarWars.com caught up with Lee Kaburis, game manager at Gameloft, Jacques Durand, creative director at Gameloft, and Craig Derrick, Lucasfilm Games executive producer to discuss the surprising spark for the minifigure focus of LEGO Star Wars: Castaways, working with “real-life encyclopedias of everything Star Wars,” and how the influence of Disney Parks helped bring it all together. 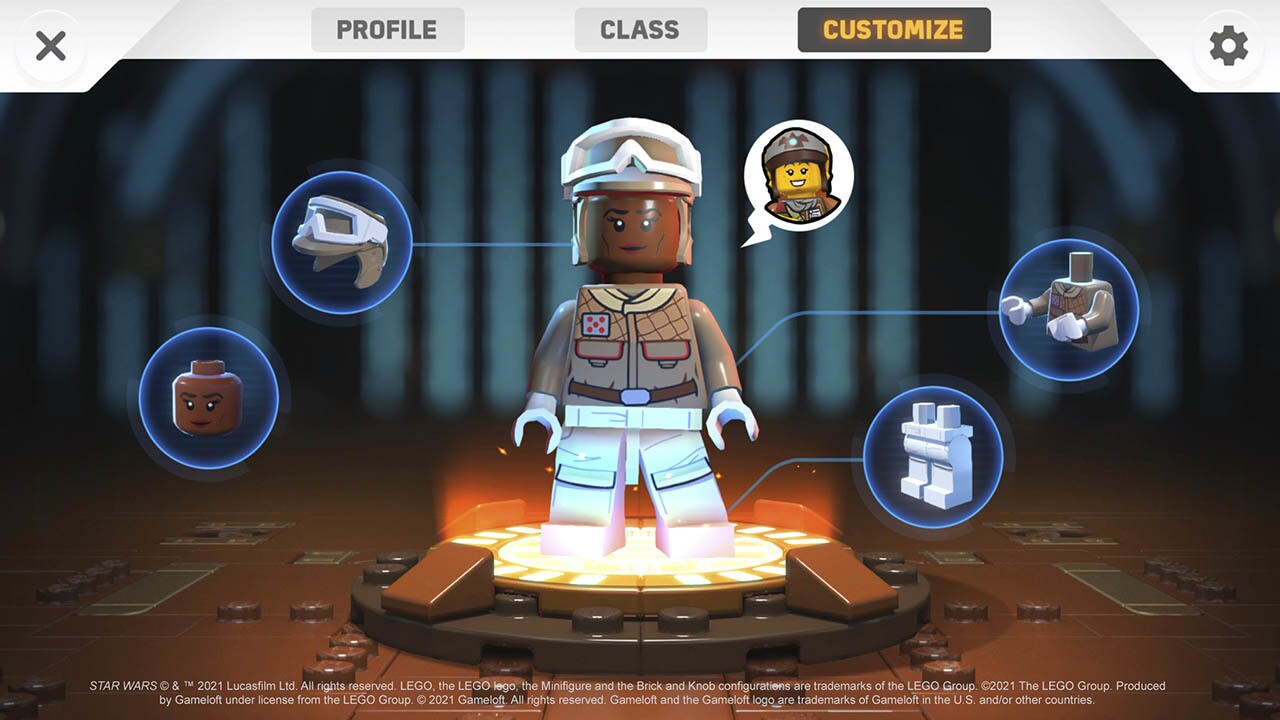 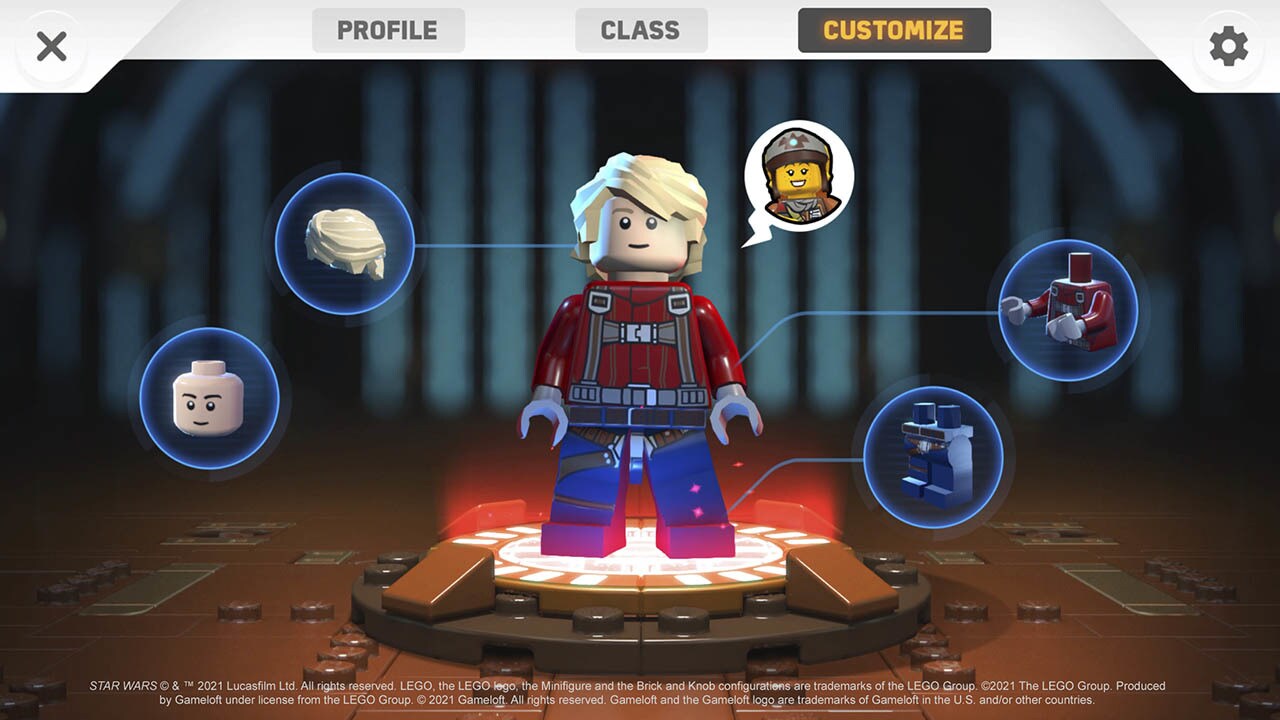 StarWars.com: Customizing your own LEGO Star Wars character for a video game is such a great concept. Can you talk about the genesis of the idea and coming up with all the ways to develop your character?

Jacques Durand: The idea started when we looked at an actual LEGO minifigure and thought: how do kids interact and play with the actual toys? We remembered what it was like when we were kids and we were playing with our LEGO toys, mixing and matching things and bringing out our own creativity to express ourselves with the unique things we’d create.

In short, we wanted something unique, something that could bring out the same expression and creativity brought out by playing with the actual physical LEGO toys.

So, like the toys, players can swap around the actual hair, head, torso, and legs of the minifigures. We searched through the LEGO Star Wars library of all of these existing parts and chose those we felt would best suit the game at launch. Although we only chose a small subset of existing pieces, hundreds of thousands of combinations can be made. We also had a little bit of leeway to play with the hair a little more and search outside LEGO Star Wars to allow for a greater variety of hair styles and options.

Craig Derrick: From the beginning, we wanted LEGO Star Wars Castaways to be about you, the player, stepping into the world of Star Wars and discovering this mysterious planet, meeting all-new characters, and exploring and playing with your real-life friends. We felt the best way to do that was to build the story and gameplay around this new expression, allow the player to customize the look of their minifigure from a host of fantastic costumes and accessories that can only come from a LEGO Star Wars game while allowing them to choose emotes and expressions, hairstyles, complexion, gender, and gear. The result is you feel immediately welcomed on this island while staring in your own Star Wars adventure. 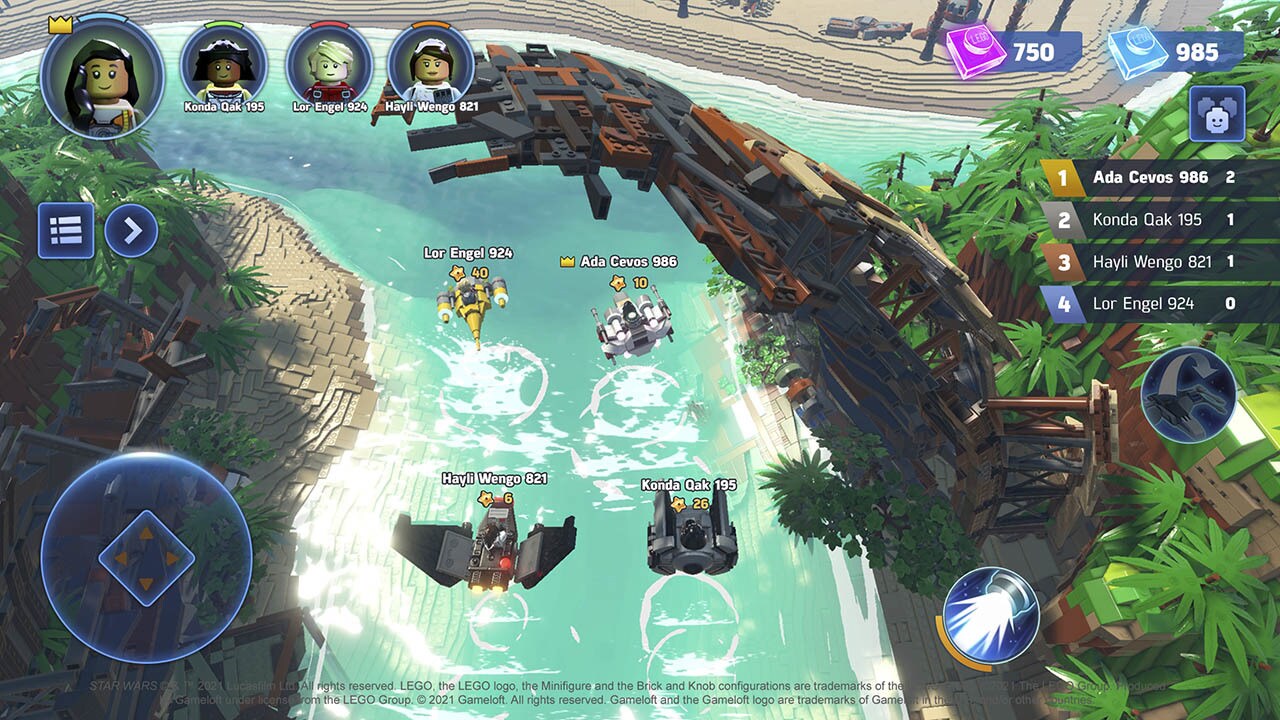 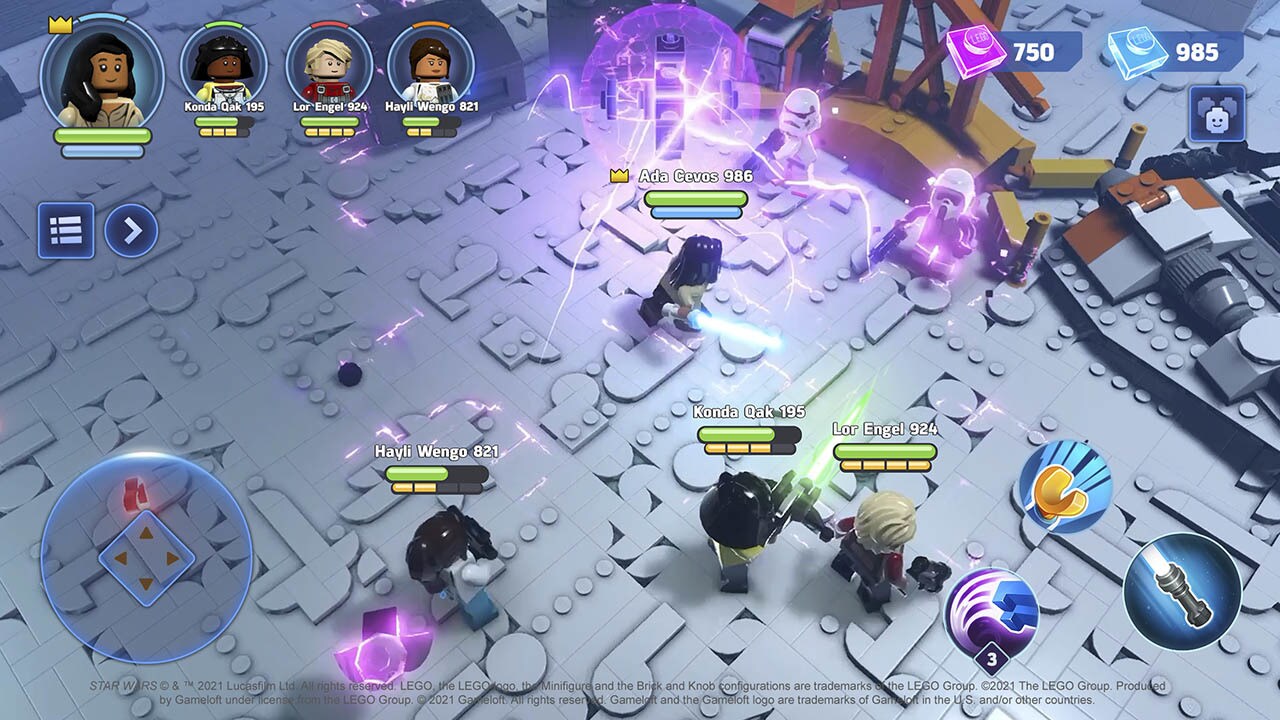 StarWars.com: How did you develop the story of the game?

Craig Derrick: Early in development, we knew we wanted to create a never-before-seen location with a mysterious history and a new cast of characters. We also wanted to allow familiar characters, moments, and elements from the Star Wars saga that everyone knows and loves.

To do that, the Lucasfilm Games team worked very closely with the Lucasfilm Story Group and the creatives at Gameloft early on to identify a framing story and worldbuilding that would allow us an entry point that sets up the plot and structure of the story, while also giving the player the agency and freedom to create their narrative.

Lee Kaburis: We worked closely with Lucasfilm Games to plan out the eight chapters of the narrative of LEGO Star Wars: Castaways.  Our senior narrative designer worked with the Lucasfilm Story Group, as well as the Gameloft team, to build it into the narrative that we have today.

Our narrative designer would work on the story, we’d have some reviews internally, and when we felt that a certain section of the narrative was in a good enough state, we’d send it over to the Lucasfilm team for review and feedback. We would schedule meetings to discuss feedback live with Lucasfilm and, believe it or not, in pre-pandemic times, we actually met face to face, as well!

We would also invite the Lucasfilm team to play the game with us at various milestones so that they could get a feel of what the game was shaping up to be so that could, in turn, fuel all of our creative juices. It was really an honor for all of us to get the chance to work with these amazing, real-life encyclopedias of everything Star Wars and be given the privilege of creating this unique and original storyline and cast of characters for our game. 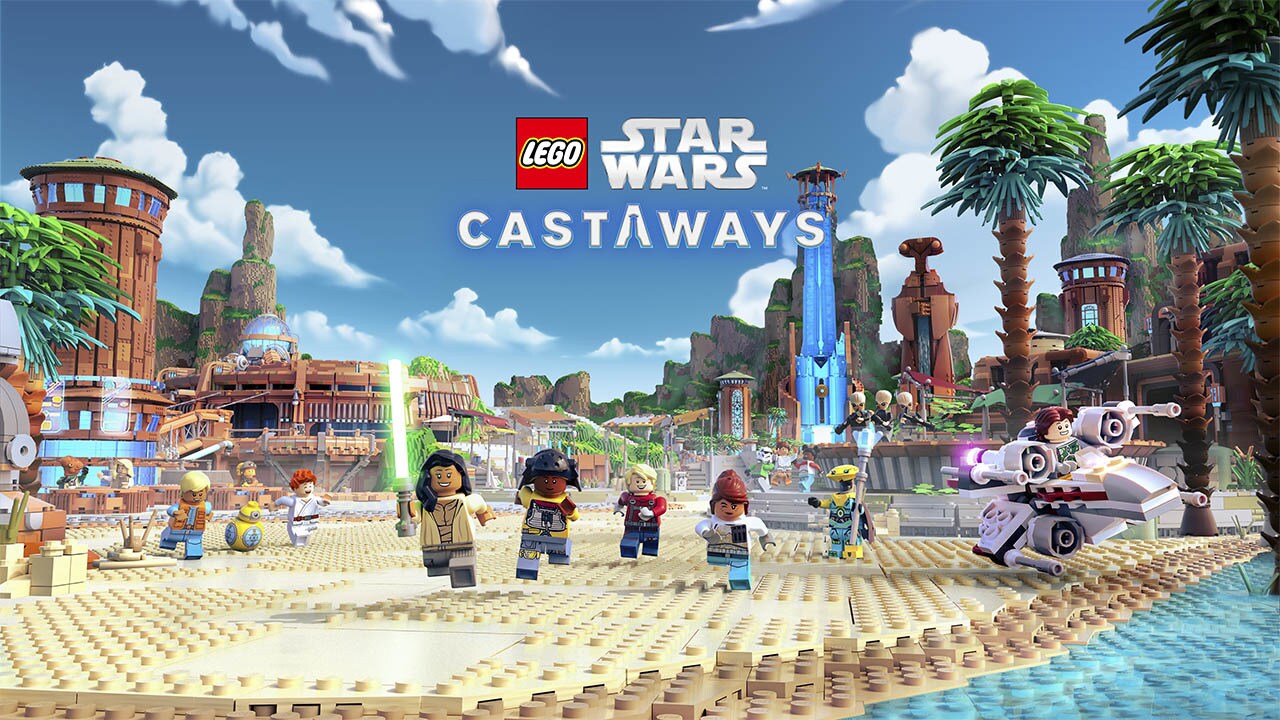 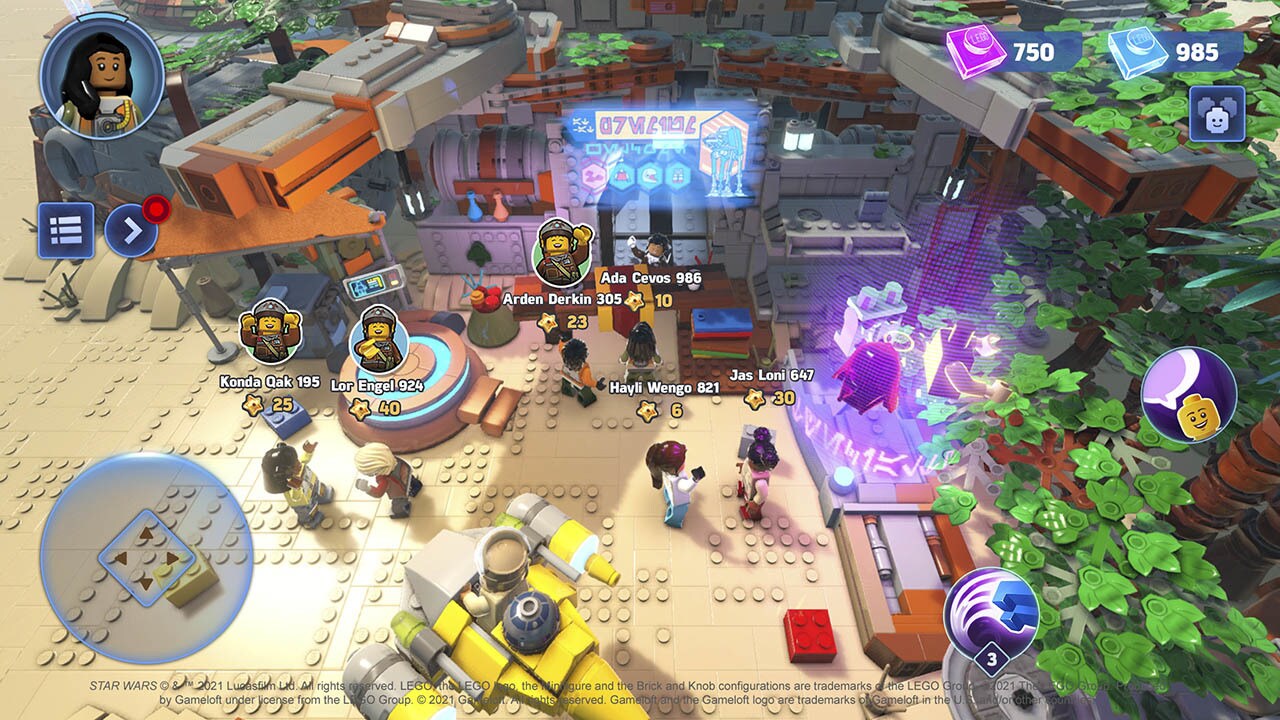 StarWars.com: There's so much to do in LEGO Star Wars: Castaways. How did you approach combining everything into one cohesive game?

Craig Derrick: We wanted to give players a choice of activities. Some are lighthearted, fun, and very social, like going on quests, racing mini-fighters around the island, and playing hot-potato with a droid, while others are about taking down stormtroopers on the Tantive IV or flying an X-wing on a mission around the Death Star.

Going back to our initial framing story of crashlanding on an unknown planet filled with characters from all known parts of the Star Wars galaxy, it gave us an exciting place to drop the player into by simply exploring and discovering on their own how all of these characters became stranded on the planet, how they were dealing with it, and how some of them are trying to get off. The introduction of a threat to the planet also gives the player a reason to help the community of Castaways, while giving them the activities you may most expect from a Star Wars game -- picking up a blaster or lightsaber (or other fun items!) and taking out stormtroopers and the like.

Jacques Durand: It definitely was a challenging task, but one that the team at Gameloft Montreal was very eager and excited to take on. Especially when we were getting the chance to work so closely with Lucasfilm Games on this.

There we were, sitting in one of the conference rooms discussing the island, and that’s when an idea, or should I say revelation hit us: what else do we know of that brings an insane number of things to do into a cohesive environment that makes them easily accessible?  The answer was looking us all in the face: Disney Parks! Disney Parks are designed in a way that they can house so many unique experiences, yet all are easily accessible from wherever you are in the Park. In that conference room, we took the decision to design the island in a similar fashion to that of a Disney Park. We made sure that all the different areas of the island; the Marketplace, Spaceport, Observatory, Hippodrome, and beach, that each gave you access to different things to do, could be easily accessed from one another, and from a central location connecting them all, while still having other paths available to access one area from the other one. Once we had that, the story and our quest system were integrated to help guide the player to different parts of the island so that we made sure that they got to experience it all.