Even with lucky dice, it helps to have a stunt double or two.

Even after Han Solo's luck had run out, his golden dice still dangled in the cockpit of his beloved Millennium Falcon, a symbol of a simpler time, when he was a young man on Corellia just dreaming of getting out of the slums and escaping to the stars.

In-universe, the aurodium-plated chance cubes were Han’s lucky charm, whether adorning the windscreen of a stolen landspeeder, tucked into the palm of his beloved friend Qi’ra, or clutched in the hands of his son, Ben Solo. For many years, the dice hung in the cockpit of the freighter he called home, a relic from the Corellian Spike variation of sabacc.

In reality, the prop counterpart to this particular piece of Star Wars lore has developed over time from simple set dressing trinket to major plot point, with several iterations along the way. "What makes the dice interesting is their evolution over time,” says Lucasfilm Archivist Madlyn Burkert. 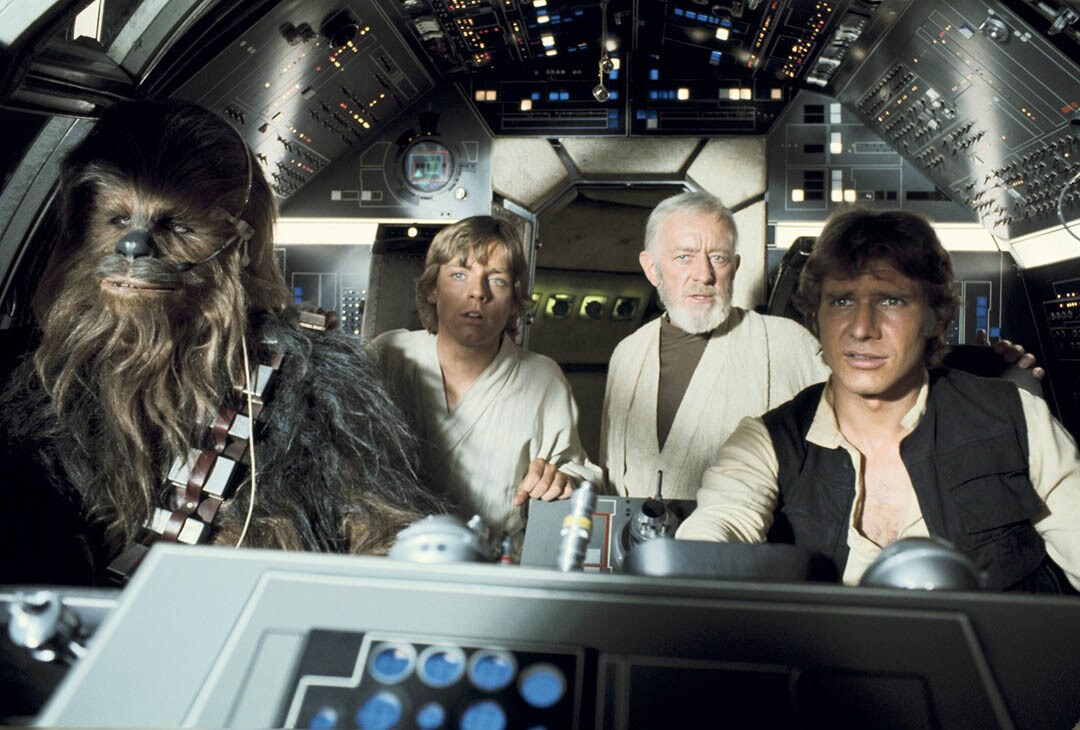 The dice were first spotted in A New Hope, most notably in a brief shot where Chewbacca’s head knocks them slightly, Burkert says. Many props and costumes from those earliest days of filming have been lost to time, but the first prop was a simple pair of Earth dice painted gold.

If you’ve never spotted these dice from their brief appearance in the film, you’re not alone, says Pablo Hidalgo, Lucasfilm’s Senior Creative Executive for Franchise Story and Content. “They did not make much of a splash in the pages of comics, guides or novels either, but there is one noteworthy appearance in Marvel Comics’ Star Wars #81, cover-dated March 1984,” Hidalgo says. In one panel, when Han is reunited with his beloved ship after the Battle of Endor, he spots the dice he “won her with.”

Nearly 40 years later, the creative team working on The Force Awakens resurrected the diminutive dice when they resurfaced for Han’s reunion with the fastest hunk of junk in the galaxy. The prop used for the part appear to be a light plastic resin casting of Earth dice once again given golden deco by hand. “These are really, really light,” Burkert notes.

For The Last Jedi, the dice prop became more of a focal point, a symbol of loss passed from Luke Skywalker to his sister, and Han’s widow, Leia Organa. This time, prop makers experimented with fabricated metal, two bronze-colored versions that were slightly larger and heavier than earlier incarnations with finer attention to the detailed symbols on each side, and a golden-hued duplicate for background shots. 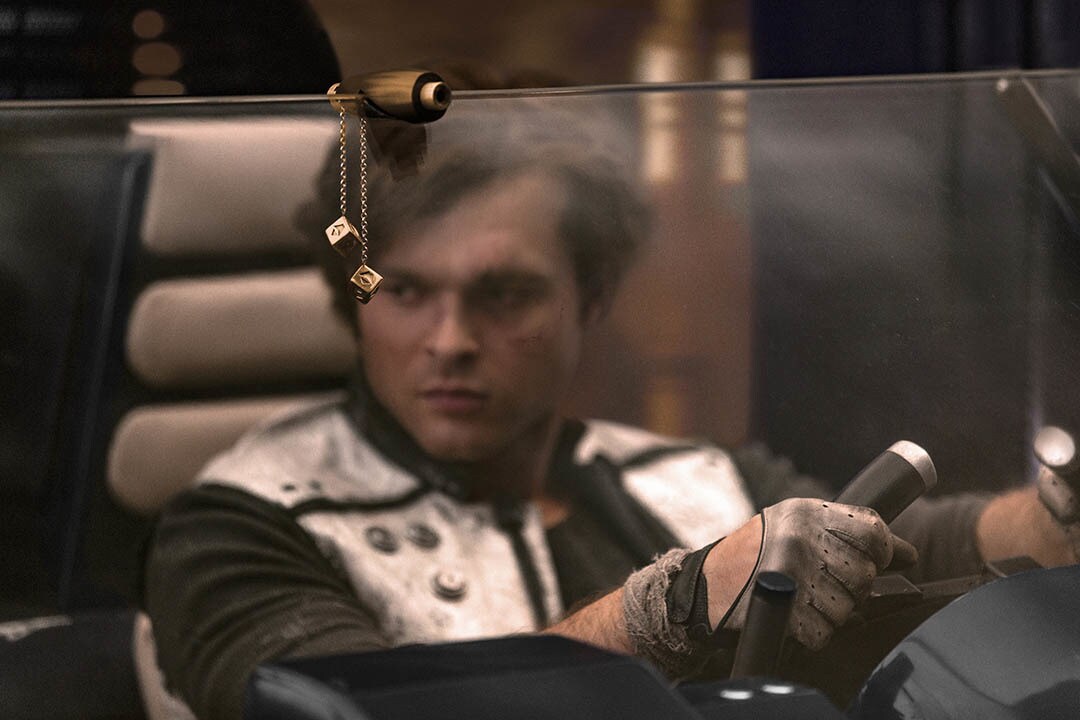 But for Solo: A Star Wars Story, where the prop plays an even bigger role in exploring Han Solo’s psyche and the events that shaped him, designers returned to the drawing board for yet another, smaller version. “It’s at the discretion of the props making team who is fabricating it,” Burkert says. And each design choice takes into account the prop’s role in the story and how it will be used onscreen. 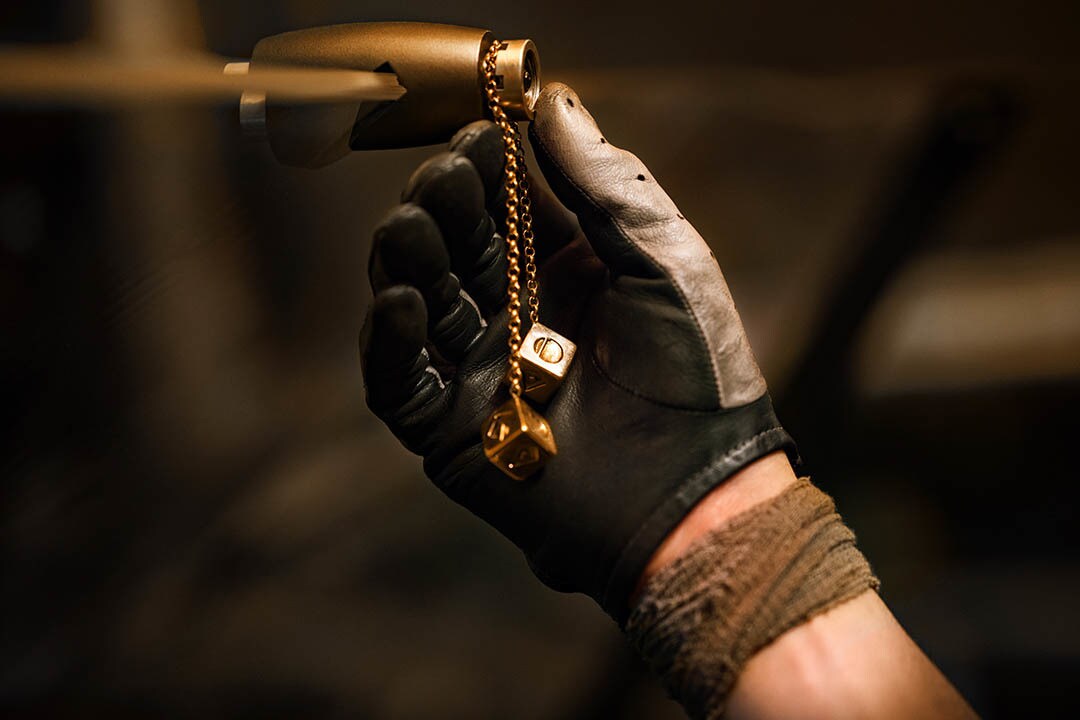 Today, the Lucasfilm Archive contains several copies and versions of the sturdy dice forged from brass, equally perfect for close-up shots and fast-paced chase scenes. “There’s a reason they might make a lot more of any given prop as it has prominence in a film,” Burkert says. “It’s look. It’s weight. But it’s also damage control. Sometimes props break on set. They also could get scratched.”

Even with lucky dice, it helps to have a stunt double or two.

But that still leaves the question – “Did Han and Lando indeed play a Corellian Spike version of sabacc and were the dice used in that fateful game on Numidian Prime seen in Solo, where Han wins the Falcon?” Hidalgo asks. “Perhaps.” The game doesn’t play out onscreen in full, “But it should be pointed out that Han could have used them in their most basic form: as a good luck charm.”

For more props from The Force Awakens, check out this week's episode of The Star Wars Show below.


Associate Editor Kristin Baver is a writer and all-around sci-fi nerd who always has just one more question in an inexhaustible list of curiosities. Sometimes she blurts out “It’s a trap!” even when it’s not. Do you know a fan who’s most impressive? Hop on Twitter and tell @KristinBaver all about them.
star wars props props Han Solo (Star Wars) Solo: A Star Wars Story inside the lucasfilm archive