StarWars.com speaks to Hasbro's Steve Evans about a 40th anniversary Darth Vader figure that will be long remembered.

When it came to making a certain Sith Lord's 6-inch action figure for Star Wars' 40th anniversary, design director Steve Evans and Hasbro had a simple, if powerful, idea.

"We took the principle of, 'Let's do a Vader without any gimmicks,'" Evans says. "Let's just do Vader."

What Evans means by "gimmicks" is, no removable helmet. No removable hand. No Emperor's lightning to attach around his body. Nothing to mark the figure in a moment in time. He wanted instead to go for something definitive -- and that meant going back to Vader as we met him in Star Wars: A New Hope.

"It was really simple," Evans says. "Just do a pure Darth Vader. Get that pure evil over without any removable this or removable that, because it's such an iconic shape and design."

For the 40th anniversary of Star Wars, Hasbro decided to honor the saga's toy roots, but with a modern twist: by releasing a new wave of the critically-acclaimed 6-inch Black Series line based on Kenner's original 12 figures from 1978. The packaging is charmingly retro, right down to the Kenner logo. Some of the figures, like the Jawa and Tusken Raider, are new. Some, like Han Solo, are long-requested reissues. And some, like Darth Vader, are particularly special.

The classic villain had previously appeared in the Black Series, but with a removable helmet. The anniversary version gave Hasbro the chance to build a better Vader, as it were, putting their learnings over the last few years with the Black Series to the test, adding more details and perfecting others.

"The guys took great delight in doing less with him, if that makes sense," Evans says. "It was just, 'get him exactly right.' Get the way that the cloth goes over his shoulder and chest plates. Even down to painting a very subtle silver on his cheeks, which we know the prop had in Episode IV when they filmed it."

Another added detail is the lenses of Vader's mask. In A New Hope, they had a reddish-brown hue, which would be darkened in subsequent films. Hasbro attempted this coloring on the original Black Series Vader and decided, as the goal this time was to make a true A New Hope version, to go for that coloring again. "Anything subtle is really hard, especially when you're making a lot of these figures," Evans says. "Grays and dark reds and browns are very hard to get exactly right. He does have these red tints [in the film], and depending on how the light's hitting it, it comes across as very red or not very red at all. There's a lot of subjectivity in which light angle do we actually call as canon. But yeah, I think getting those brown-red tinges on the lenses was important. We lose sleep over things like that." It was a risk -- had the coloring been too pronounced or even too light, it would stick out. Instead, it adds dimension and blends in.

In developing the figure, Hasbro created a brand new sculpt, with nothing carried over from the original release. The designers went back to their reference library and into Lucasfilm's archives, including movie stills, promo shots, and behind-the-scenes photography, dialing in on A New Hope-specific features like Vader's chest box, helmet shape, and silver detailing on his mask. The figure was then digitally sculpted in ZBrush, shown to Lucasfilm for input, then further developed and prototyped until a final version was ready. 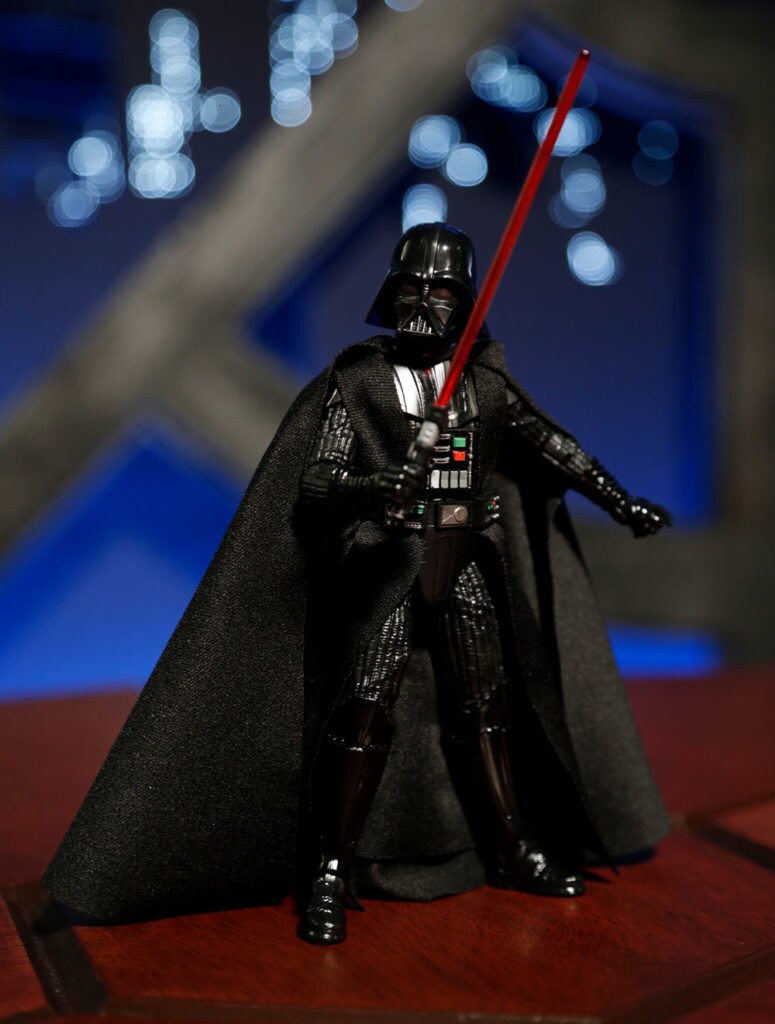 And the final figure is something to behold -- a handsome sculpt with a helmet that looks impossibly accurate, articulation that allows for dynamic poses but never comes at the cost of design, flowing bits of cloth and cape that fall naturally. His left hand is even crafted in such a way that he could either hold his lightsaber or deliver a Force choke to someone whose lack of faith he might find disturbing. (Whichever you prefer.)

"The simple, pure authenticity of Vader for the 40th anniversary is what I'm most proud of," Evans says.

This Vader would make his debut at New York Comic Con in October 2016 to raves from fans, and is finally hitting shelves alongside the rest of the 40th anniversary series. The figure comes as part of a deluxe "Legacy Pack" with a display invoking Kenner's infamous "Early Bird Kit," another smart tribute to the toys of old. As the Black Series approaches its own milestone -- the line will be four years old come fall -- 40th anniversary Vader shows how it's grown and the possibilities ahead.

"The promise of Black Series is straight-off-the-screen, movie-accurate detail, highly articulated," Evans says. "I think, as we've gone through four years, we're still getting better. Where we are now, releasing for movies that are coming up, the quality is always moving forward."