Look back at what critics said in 1980 about the sequel to Star Wars, now considered a classic. It wasn't pretty. 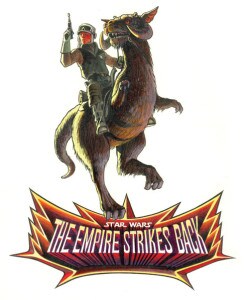 The Empire Strikes Back logo by Ralph McQuarrie.

Sitting here in 2014, the 34th year since its release, it can be hard to believe that The Empire Strikes Back wasn't always lauded as the movie masterpiece it clearly is. On the contrary, its arrival back on May 20, 1980, was welcomed with an array of mixed, lukewarm, and indifferent reviews on both sides of the Atlantic from newspapers, magazines, and TV critics alike. But of all the entries in the saga, time has been kindest to Empire's reputation and standing. Not to us fans who have adored the film since its release, but to the wider world who perhaps needed the resolutions brought to us by Return of the Jedi to fully appreciate the nuances and dangers that Empire presented.

But why did the film get such short shrift from the reviewers of the time? What was it about Empire that they missed? One of movie history's most respected critics, Pauline Kael, who wrote for The New Yorker, had this to say about the film:

"There is no sense that this ebullient, youthful saga is running thin in imagination or that it has begun to depend excessively in its marvelous special effects -- that it is in any danger, in short, of stiffening into mannerism or mere billion-dollar style."

“By far the most imaginative part of the Star Wars trilogy. This middle, bridging film is chained to an unresolved plot and doesn’t have the leaping, comic-book hedonism of the 1977 Star Wars, but you can feel the love of movie magic that went into its cascading imagery.”


High praise from one of the most respected critics, and she wasn't finished.

"I'm not sure I'm up for seven more Star Wars adventures, but I can hardly wait for the next one."


Other reviewers couldn't quite grasp the film, its basic plot or the nature of returning characters. Published on June 15, 1980, Vincent Canby wrote this in The New York Times:

“The Empire Strikes Back is not a truly terrible movie. It's a nice movie. It's not, by any means, as nice as Star Wars. It's not as fresh and funny and surprising and witty, but it is nice and inoffensive and, in a way that no one associated with it need be ashamed of, it's also silly. Attending to it is a lot like reading the middle of a comic book. It is amusing in fitful patches but you're likely to find more beauty, suspense, discipline, craft and art when watching a New York harbor pilot bring the Queen Elizabeth 2 into her Hudson River berth, which is what The Empire Strikes Back most reminds me of. It's a big, expensive, time-consuming, essentially mechanical operation. The Empire Strikes Back is about as personal as a Christmas card from a bank.”


The Bank of Aargau perhaps, but you take his meaning. Clearly Mr. Canby wasn't feeling the Force that day, but over here in the UK, The Guardian certainly were as they praised the film's technical prowess and innovation.

“It is technically even more proficient, has virtually the same ingredients and bursts forth into a world that still seems ripe for its special blend of nostalgically simple story-telling and complicated technology. If George Lucas wants to go on and on...there seems no good reason yet why anything should stop him.” Prophetic words indeed.


Logical, given the film's structuring as the second chapter in a three-act play, a point raised by Harrison Ford in the July 24, 1980, edition of Rolling Stone.

"One of George's real strengths is not giving you all the information you need, yet at the same time not denying you anything essential. You have a feeling that you want to know more at all times.

"I have heard frequently that there is a certain kind of disappointment with the ending of the second film. I've heard people say, 'There's no end to this film' or 'I can't wait to find out what happens.' But they will, and that's exactly the effect intended by the ending."


Writing in The Radio Times here in the UK, reviewer Alan Jones was astute in his distillation of the film's plot and motivations, noting the more mature nature of the film and its characters' relationships.

"Director Irvin Kershner's imaginative supervision of George Lucas's brainchild gives this second part of the first Star Wars trilogy a truly epic dimension, adding a mature, philosophical aspect to the nonstop barrage of brilliant special effects. Events take place all over the universe -- Darth Vader sends Imperial troops to crush the rebels on the ice planet Hoth, while Luke Skywalker searches out Jedi master Yoda for further instruction in the mysterious ways of "the Force" -- and the much-loved characters are developed in intriguing ways. Kershner darkens the imagery of Lucas's vibrant, futuristic fairy tale and deepens its narrative with provocative plot strands, giving this sequel a cynical, harder edge that lifts it above the serial roots of its predecessor."


Surprisingly Cinefantastique was less than enthusiastic about the sequel, condemning Empire as “A lifeless copy of Star Wars propelled chiefly on the momentum of that earlier film,” but Alan Frank writing in The Daily Star here in the UK said, "The level of invention and the special effects are as high as ever and, for once, a sequel is as enjoyable and exciting as the original.”

Returning to Kael, it's interesting -- almost quaint -- to see how people described our now familiar heroes back in the early '80s. Characters that any modern reviewer would be very familiar with still seemed alien back then, as Kael's descriptions show:

"Scenes linger in the mind: the light playing on Darth Vader's gleaming surfaces as this metal man, who's like a giant armored insect, fills the screen; Han Solo saving Luke's life on the ice planet Hoth by slashing open a snow camel and warming him inside; Luke's hand being lopped off, and his seemingly endless fall through space; Chewbacca, the Wookiee, yowling in grief or in comic fear, his sounds so hyper-human you couldn't help laughing at them; the big-eared green elf Yoda, with shining ancient eyes, who pontifically instructs Luke in how to grow up wise -- Yoda looks like a wonton and talks like a fortune cookie."


Perhaps the biggest divide in opinion comes from The Telegraph, with a review in their Sunday edition stating, “As the successor to Star Wars it is every bit as visually astounding, fast-moving, noisy, swashbuckling and unbelievable as its parent.”

In the The Daily Telegraph, Eric Shorter wrote the following on May 23, 1980:

"(T)hey assure us that their latest offering is only episode five in a nine-part saga and that although we haven’t yet had the first three parts they will all reach us in good time. There is talk of trilogies and myths and legends as if the enterprise had classical aspirations. Meanwhile what we get on the screen is the usual emphatic pride in machinery and paucity of characterisation that marks so much space fiction. Who are these people? What are they up to? Why is it so hard to care what happens to them? If you ever saw and committed to memory Star Wars such questions may seem naively exacting, since this episode reintroduces many of the figures and fantasies from the earlier film."


Shorter goes on to make the admission that he'd never seen Star Wars. Imagine that!

"(H)aving somewhat advertently missed the famous predecessor I had to take for granted the motives and the cues for passion in a fable of such fantasy that one quickly understands what the advocates of it mean by its appeal to children of all ages. It is violent. It is conventional. It is not without humour of the cosy Enid Blyton kind. And it is devoid of blood."


A less informed review you could hardly hope to find. Writing in The Washington Post, reviewer Judith Martin gave a measured review, balancing her appreciation for the film's strengths as a sci-fi movie against any over-the-top cries for it to be described as a masterpiece of cinema.

"To call The Empire Strikes Back a good junk movie is no insult: There is enough bad junk around. And surely we're getting over the snobbery of pretending that it is undemocratic to recognize any hierarchy of culture, as if both low and high can't be appreciated, often be the same people.

But when light entertainment is done well, someone is bound to make extravagant and unsupportable claims for its being great art. You will hear that this sequel to Star Wars is part of a vast new mythology, as if it were the Oresteia. Its originator, George Lucas, has revealed that the two pictures are actually parts four and five of a nine-part sage, as if audiences will some day receive the total the way devotees now go to Seattle for a week of immersion in Wagner's complete Ring Cycle.

Nonsense. This is no monumental artistic work, but a science-fiction movie done more snappily than most, including its own predecessor. A chocolate bar is a marvelous sweet that does not need to pretend to be a chocolate soufflé; musical comedies are wonderful entertainment without trying to compete with opera; blue jeans are a perfect garment that shouldn't be compared with haute couture. There are times when you would much rather have a really good hot dog than any steak, but you can still recognize that one is junk food and the other isn't."


Fair comment at the time, but as I mentioned before, the bookending of Jedi makes Empire all the stronger, and seals the trilogy as an entity of its own. Martin also gives some memorable descriptions of the principal characters:

"A new puppet, representing a great guru but looking like an elderly, Eastern rodent, is a success; an invented beast of burden that looks like the rear half of a cheap camel costume is not. The monkish character played by Alec Guinness is back with sparkling lights on his shoulders and a transparent body to indicate that he was killed off in Star Wars."


Time Out here in the UK was impressed by the film, but perhaps not for the reasons you'd expect.

"Familiarity breeds content; from the corny 'droids to the tired and emotional Wookie, the events, recognitions and revelations of the sequel have the rhythm of Soap in 70 mm -- and we love it, it makes us better people. As it appears that the plot is now infinitely extendable, a li'l oedipal confidence works in; there's more passion, more pain and more riddles in this family plot. With a goddam muppet as its spiritual guide, Star Wars: Episode V is an impressive indulgence in Hollywood style for the TV generation."


Praising the soap elements of the film. Interesting, and quite astute.

So you can see that The Empire Strikes Back covered the spectrum of critical opinion back in the early '80s, from deep disdain to casual indifference, from mild appreciation to high praise. Reviews from 1997's Special Edition era would be kinder, the intervening years cementing the original trilogy into the foundations of popular culture, and today the film regularly tops popular movie polls worldwide and is lauded as one of the great movie sequels.

Which goes to show, it's all about a certain point of view.