10 Memorable Musical Instruments from the Galaxy Far, Far Away

From movies to video games, instruments are seen throughout Star Wars.

One of the most beloved and integral components of Star Wars is the amazing music that permeates the storytelling. From the orchestral scores of John Williams to the deep Mongolian throat-singing of the HU in Star Wars Jedi: Fallen Order, music takes an important role in telling us the roles of the characters, the settings, and what we as the audience should feel -- you could say that it is instrumental. While much of the music is solely for us, the audience, there is also the saga’s diegetic music: the songs that the characters hear during their adventures. Whether it’s from live bands playing a crowded venue or from some pre-recorded tunes on some kind of playback device, music is everywhere in the galaxy far, far away, and much of that music comes from people playing instruments. From Mon Calamari shell horns to the growdi harmonique, musical instruments run the gamut from the simple to the very complex. Here’s a look at 10 memorable musical instruments in Star Wars. 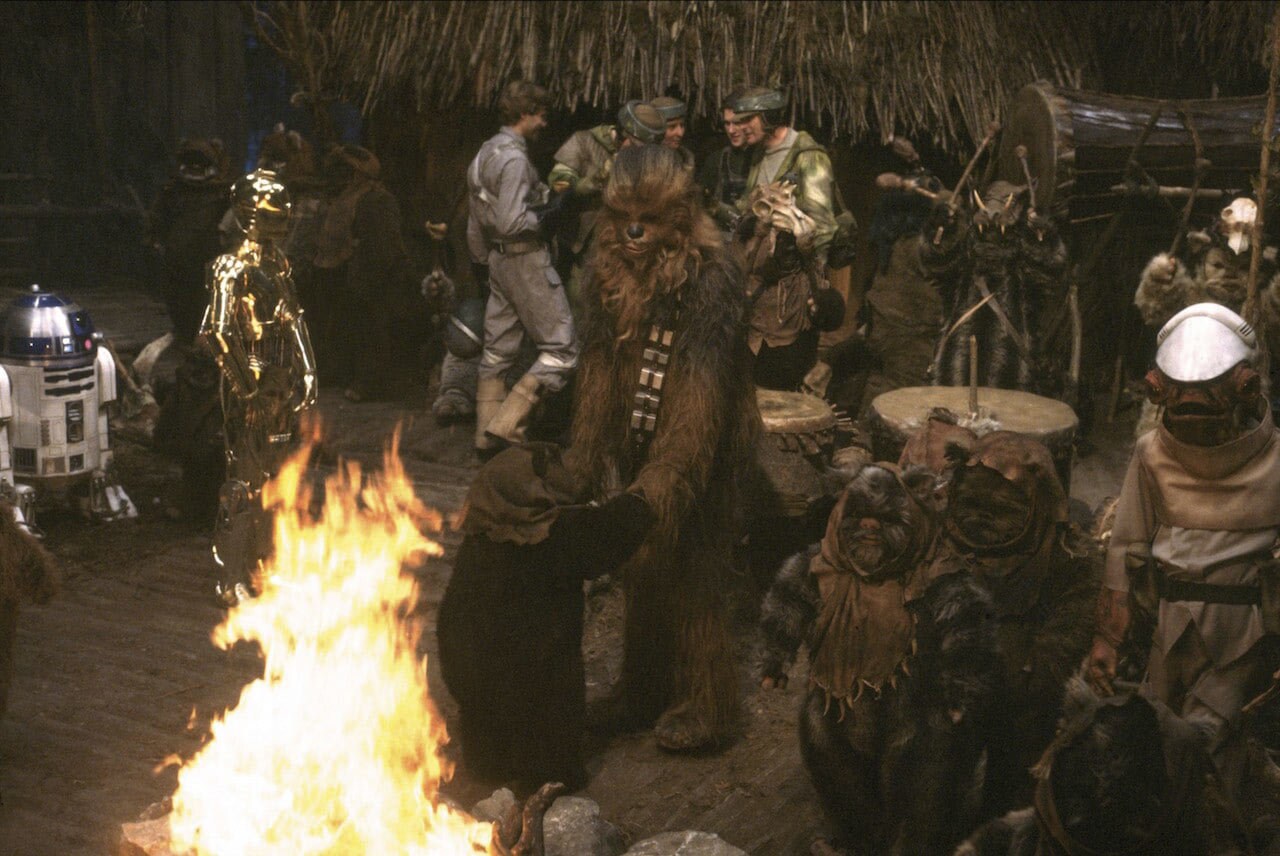 One of the most basic musical instruments across the galaxy is the drum. Stretch a tight skin or other surface across a hollow shape, and you’ve got yourself a drum, either played by hand, like parading Gungans in Star Wars: The Phantom Menace, or beat with sticks, like the giant drum used on both sides by Ak-Rev and Umpass-stay in the palace of Jabba the Hutt. But perhaps the most well-known drum set in Star Wars comes at the end of Star Wars: Return of the Jedi, improvised by the victorious Ewoks. Using the hard surfaces of looted stormtrooper, biker scout, and other Imperial helmets, Brethupp banged out a tune. Sure it looks easy, but have you ever considered how to arrange a bunch of helmets by pitch and then keep them in tune? 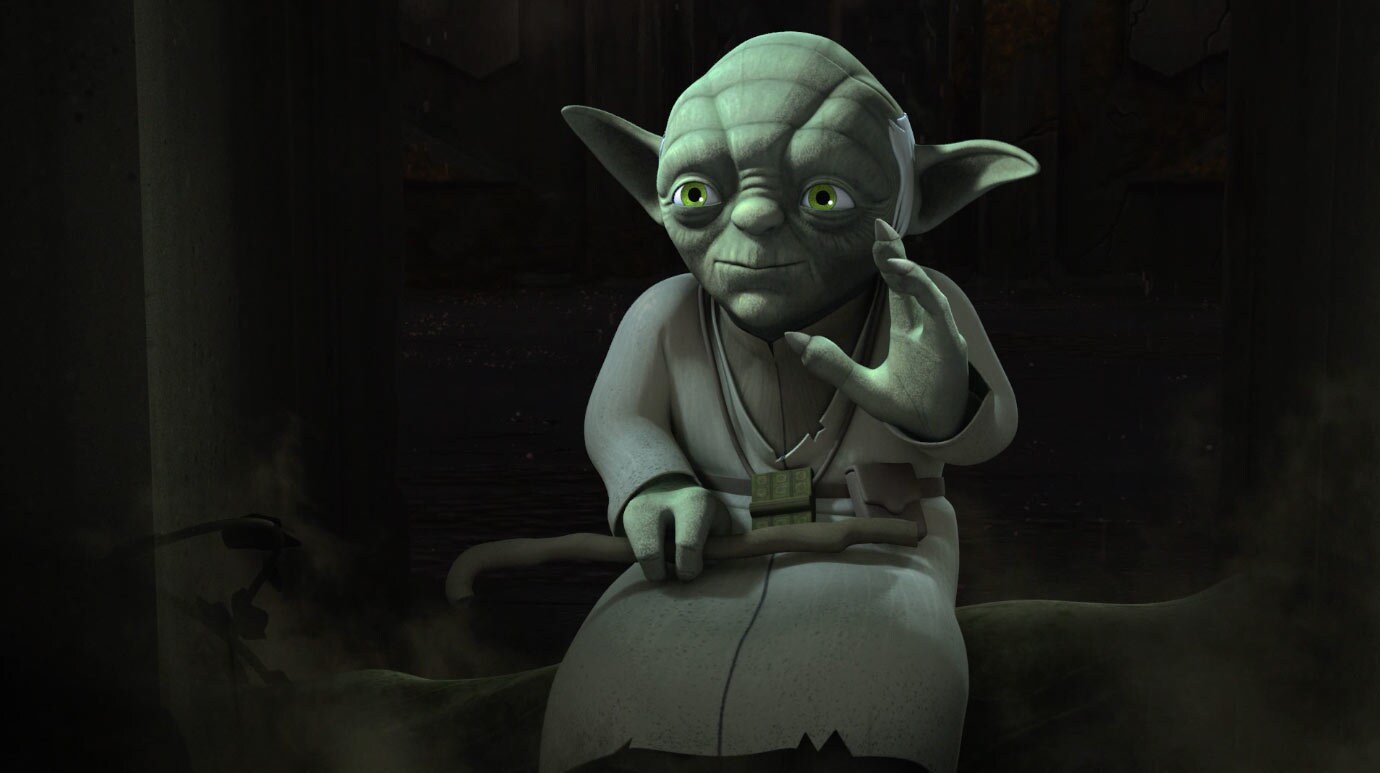 Even in exile on Dagobah, the Jedi Master Yoda needs a little tune every now and then to entertain himself, and so he wears a blissl around his neck in Star Wars: The Empire Strikes Back. Similar to a pan flute, the blissl had three little pipes, perhaps not much for a range of notes, but probably a lot easier to keep clean in the mud of Dagobah than a more elaborate wind instrument. In Mos Espa, blissl players at the podrace kept their instruments in pitch with blissl tuners. 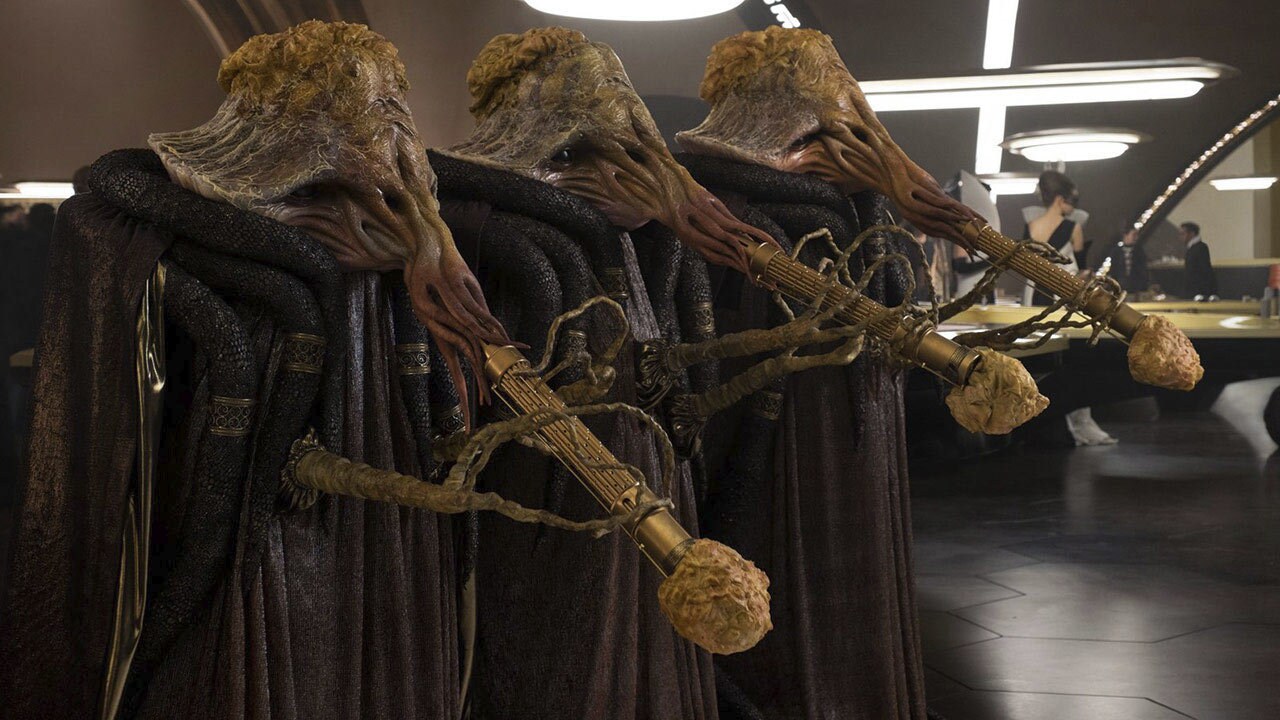 Canto Bight is a city of luxury, and the resplendent casinos and hotels require their music to be top notch. At the Canto Casino and Racetrack, melodies are provided by the Palandag trio of Jhat, Dhuz, and Hhex, playing on their f’nonc horns. This wind instrument has a long tube that ends in a gas bag. Is this sac helping to hold air to be slowly released like a bagpipe? Or does it simply change the pitch through using a gas with a different density like helium? Whatever the case, the f’nonc horn provides a touch of class to the already ritzy casino scene in Star Wars: The Last Jedi.

While the Ewoks have their battle horns and Wookiees have their clarions sounding a call to arms, the Gungans have a whole variety of horns for a variety of uses. Leading their troops and beasts into battle from the swamps of Naboo in The Phantom Menace, Gungan hornblowers play their didgeridoo-sounding battle horns. Later, Augie’s Grand Municipal Band parades through the streets of Theed with their trumpet-like bawoonkas, accompanied with their drums.

If one horn is good, then a multitude of horns is better, right? Filling that niche is the hypolliope horn cluster, seen in Star Wars: The Force Awakens. As part of Maz Kanata’s house band, Shag Kava, that rocked with such hits as “Jabba Flow,” Infrablue Zedbeddy Coggins is the master of the hypolliope, blowing into a single mouthpiece, and sending the air through a whole cluster of twisting output pipes. If there’s a wind instrument able to sound like a one-sentient band, the hypolliope cluster horn is probably it. Similar to the hypolliope, but on a smaller scale, is the bandfill, a boxy instrument played by Nalan Cheel of the Modal Nodes in the cantina.

There’s one musical instrument that is mentioned a few times but never actually seen: the valachord from Solo: A Star Wars Story. Tobias Beckett yearns for the time he will be clear of debt and possibly rich from one last score, so that he can finally learn to play the valachord, a kind of instrument played with keys. While not seen in the film, concept art for the movie, found in The Art of Solo: A Star Wars Story, reveals that the valachord appears with strings between two arcs, so while played with keys, it is more rightly a stringed instrument, in the style of an open vertical piano. In the Aftermath books, Temmin Wexley rigs the family valachord to unlock a secret door when the right combination of notes is played. Another popular stringed instrument is the seven-string hallikset, as seen in The Force Awakens played by Sudswater Dillifay Glon, and in Star Wars Jedi: Fallen Order by Cal Kestis. 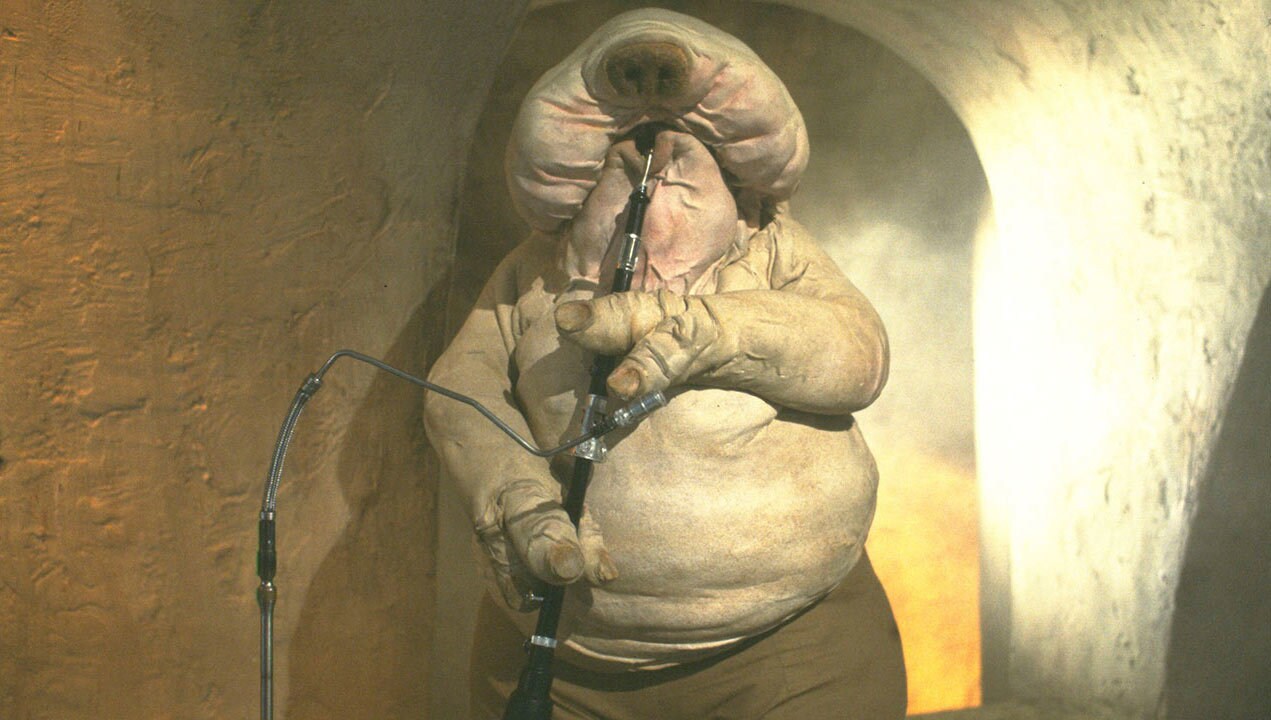 The Max Rebo Band is probably the most famous musical group name known to Star Wars fans. One of the key players in the band is Droopy McCool (his stage name, since his real name is unpronounceable set of whistles), and he plays the chindinkalu flute in Return of the Jedi. A long straight wind instrument like a clarinet or an oboe, the chindinkalu flute, when in the hands of the Kitonak, adds a signature tone to the band rocking Jabba’s palace. A flute also appears in the first episode of The Mandalorian, in the hands of a Kubaz, who uses it to summon taxi speeders for Mando.

The Aki-Aki of Pasaana treasure music as a way to retell their folklore through song. In Star Wars: The Rise of Skywalker, a variety of Aki-Aki instruments are seen and heard from the tambourine-like jangle-deff to the stomp harmonium and the triple ride-rhythm O’Tawa cymbals. One of their more elaborate instruments is the flukebladder pipe balaxan. Looking similar to a xylophone with pipes hanging down below the keys, the balaxan has compressor tome targets on the top, which, when pressed, push sound through the hanging flukebladders. These instruments help bring the tune for Aki-Aki dances, including the largest one, the Lobeha Mwadu, centerpiece of the Festival of the Ancients. 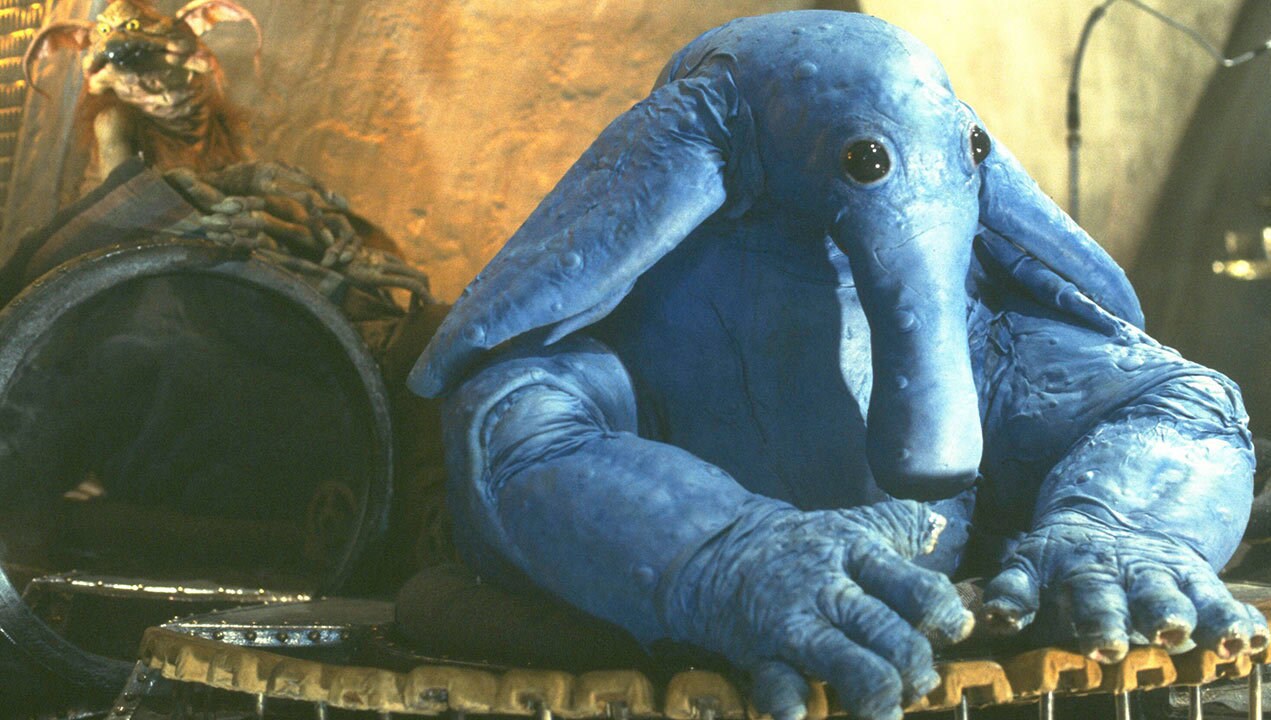 When it comes to tickling the keys, no one does it better than Max Rebo, playing in Jabba’s palace. As leader of his namesake band, Max Rebo plays the red ball jett organ in Return of the Jedi. Featuring 21 keys and surrounding the Ortolan musician, the red ball organ, also called a nalargon, provides the percussion sounds that lay down the notes for such hits as “Jedi Rocks” and “Lapti Nek.” Sadly, it's assumed that Rebo’s organ suffered a poor fate and went down with the explosion that engulfed Jabba’s sail barge. Fellow Max Rebo Band member, Rappertunie, plays a hybrid percussion/wind instrument, the growdi harmonique, in the palace.

Probably the most well-known and most-loved diegetic music in Star Wars are the jazzy songs played in the Mos Eisley cantina in Star Wars: A New Hope. Figrin D’an, the leader of the Bith cantina band, the Modal Nodes, plays his signature kloo horn for the hit songs “Mad About Me” and “Dune Sea Special.” A double-reeded wind instrument with a long straight body and a mouthpiece on an S-shaped neck, the kloo horn is a staple of Bith musicians, with Lirin Car’n playing second kloo for the Modal Nodes, and even Figrin’s brother, Barquin D’an, playing one with the Max Rebo Band.