The long conjectured third Star Wars trilogy has kept fans guessing for decades, and may even have a few numerologists working on their mysteries. George Lucas' shifting feelings about future Star Wars trilogies have consistently clouded the picture. Given the difficulties associated with the birth of Star Wars in 1977, it's no wonder that Lucas's ideas kaleidoscoped. When trying to get such a big undertaking up and running and out the door, visions of the future are understandably hazy. But, as of October 30, 2012, Episodes VII, VIII and IX have been announced as real and soon to be tangible -- but they've existed as gossamer spirits for nearly 40 years.

On December 29, 1975, in conversation with Alan Dean Foster per the novelization of Star Wars, Lucas mentioned the prequel trilogy along with what would become Episodes V and VI: "I want to have Luke kiss the Princess in the second book. In the third book, I want the story just about the soap opera of the Skywalker family, which ends with the destruction of the Empire. Then someday I want to do the back story of Kenobi as a young man - a story of the Jedi and how the Emperor eventually takes over and turns the whole thing from a Republic into an Empire, and tricks all the Jedi and kills them. The whole battle where Luke's father gets killed. That would be impossible to do, but it's great to dream about."

As Lucas came to terms with Twentieth Century-Fox during the making of Star Wars, he secured the legal rights to his sequels, though they remained undefined at the time. On location for the first phase of principal photography in Tunisia in March 1976, Lucas began a long tradition of talking with close collaborators, voicing his ideas for these other episodes and trilogies, much as Walt Disney would do of his projects.

"You know, when I first did this, it was four trilogies," Mark Hamill recalled in 2004, speaking of their conversation in 1976. "Twelve movies! Out on the desert, any time between setups... lots of free time. And George was talking about this whole thing... ‘Um, how'd you like to be in Episode IX?' 'When is that going to be?' '2011.' […] I said, 'Well, what do you want me to do?' He said, 'You'll just be like a cameo. You'll be like Obi-Wan handing the lightsaber down to the next new hope.'"

In 1978, a Time magazine article reported that the Star Wars Corporation (a subsidiary Lucas had formed for Star Wars) would be producing "Star Wars II [Empire], and then, count them, 10 other planned sequels." At that time Lucas consistently mentioned 12 films and even created a barebones outline to that effect. 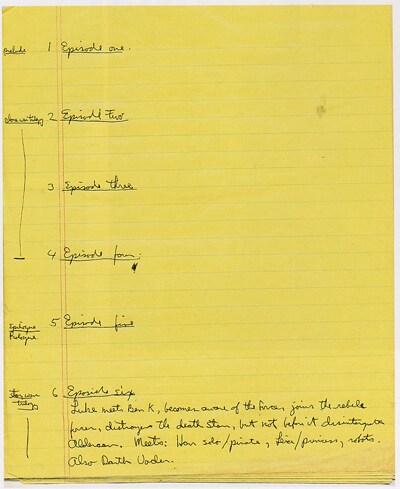 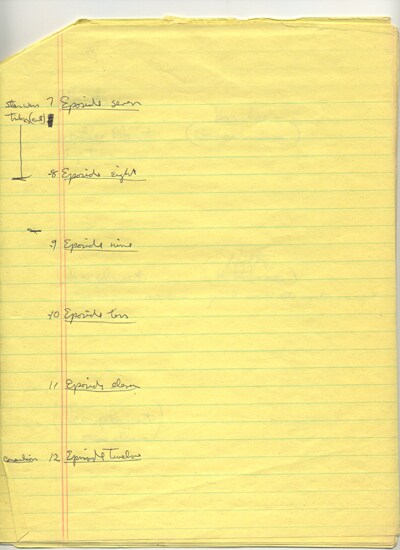 In it, the original trilogy occupied Episodes VI, VII, and VIII; a Clone Wars trilogy took up Episodes II, III, and IV, while Episode I was a "prelude," Episodes IX through XI were simply left blank - and Episode XII was the "conclusion."

In 1979, however, Lucas said in an interview on the set of Empire, "The first script was one of six original stories I had written in the form of two trilogies. After the success of Star Wars, I added another trilogy. So now there are nine stories. The original two trilogies were conceived of as six films of which the first film was number four."

While in postproduction in early 1980, Lucas used to kick back from time to time with ILM manager Jim Bloom and muse about the bigger story. "The first trilogy is about the young Ben Kenobi and the early life of Luke's father when Luke is a little boy," Lucas said. "This trilogy takes place some 20 years before the second trilogy, which includes Star Wars and Empire. About a year or two passes between each story of the trilogy and about 20 years between the trilogies. The entire saga spans about 55 years. I'm still left with three trilogies of nine films. At two hours each, that's about eighteen hours of film!"

While Empire was originally part of a 12-film plan, by the time it was released, the number had clearly been reduced to nine. "The prequel stories exist -- where Darth Vader came from, the whole story about Darth and Ben Kenobi -- and it all takes place before Luke was born," Lucas explained at the time. "The other one -- what happens to Luke afterward -- is much more ethereal. I have a tiny notebook full of notes on that. If I'm really ambitious, I could proceed to figure out what would have happened to Luke."

Lucas mentioned these notebooks -- or one big book -- to me, a few years ago. I asked if I could see it, but he declined. My feeling is that this big book or these notebooks are private, though Lucas has occasionally sent me via an assistant miscellaneous handwritten notes from the period 1976-1983 to help in the writing of the making-of books.

But two years later while filming Jedi, for many reasons, Lucas was burning out, tired of the whole enterprise: "I'm only doing this because I started it and now I have to finish it," he adds. "The next trilogy will be all someone else's vision."

As of today, Lucas has given his new co-chairman Kathleen Kennedy several ideas and is really going into semi-retirement. Now, in a relatively short time, compared to the decades of speculation, fans will learn the secrets of Episodes VII, VIII and IX. Star Wars has risen again!

7 Reasons Why The Last Jedi Novelization is Essential

Check Out the Star Wars: The Last Jedi Set and Scoring Stage in Stunning 360 VR