The first film of the prequel trilogy has much to say about emotions, friendship, and more.

Studying Skywalkers is an exclusive column that investigates the characters, themes, and lessons of Star Wars from an educational, literary perspective. In this installment, StarWars.com looks at prevalent themes in The Phantom Menace.

As we get closer and closer to December 18, 2015, when the next epic chapter in Star Wars lore approaches, many of you will be revisiting the Star Wars films with palpable anticipation and excitement. While we are not certain as to how Star Wars: The Force Awakens will incorporate specific storylines, character development, and plot details, we can be optimistic that what we see in theaters will be replete with moments that will have us examining the themes, concepts, and ideas. Undoubtedly, we will be enjoying the existing films in a whole new way due to the ideas that will flood our collective consciousness once we are in the movie theaters this Christmas season.

To help prepare for this amazing time in Star Wars fandom, StarWars.com will be reexamining some of the themes in the six existing motion pictures. Let's start with 1999’s Star Wars: The Phantom Menace, where we're introduced to a young Anakin Skywalker who enables us to think about the future fallen Jedi in all-new ways. When the film opens, the first two Jedi we encounter are Qui-Gon Jinn and Obi Wan Kenobi. There is clearly a bond between the two, as we see Master and Padawan united against a new threat to the Republic. While the two may not always agree, they still realize they are beholden to one another through the Force, the Jedi Order, and their friendship.

During a particularly poignant scene, Obi-Wan objects to his mentor’s insistence to defy the Jedi Council and train Anakin. Obi-Wan stands up to his Master, who responds with dignity, poise, and direct communication. He acknowledges Kenobi’s point of view, but says he will do what he must. He respects his friend but trusts his instincts. This demonstrates how to react when disagreeing with a friend or mentor in order to ensure communication. Clearly, the Jedi Order would benefit from more of this.

The question then becomes, to whom should the Jedi place their loyalty? The Master? The Order? The Republic? And when do loyalty and friendship come in direct contrast with one another? Star Wars fans know where the story is going (naturally), but the Jedi do not. This gives significant context to the title, The Phantom Menace, as it raises these questions.

No doubt, the classic line we heard in the first teaser trailer is reverberating through your mind. When Yoda proclaims, “Fear leads to anger; anger leads to hate; hate leads to suffering,” the immediate impact of fear is profoundly realized. The belief that fear is damaging to an individual psyche is one of the oldest motifs in all of literature. Yoda makes the connection in dramatic fashion and foreshadows what we as an audience know to be true. In 1999 it was not yet crystallized, but the seeds of doubt are placed in the Council, Anakin, and the audience. How can this seemly innocuous boy turn into the Dark Lord of the Sith? All signs point to fear. 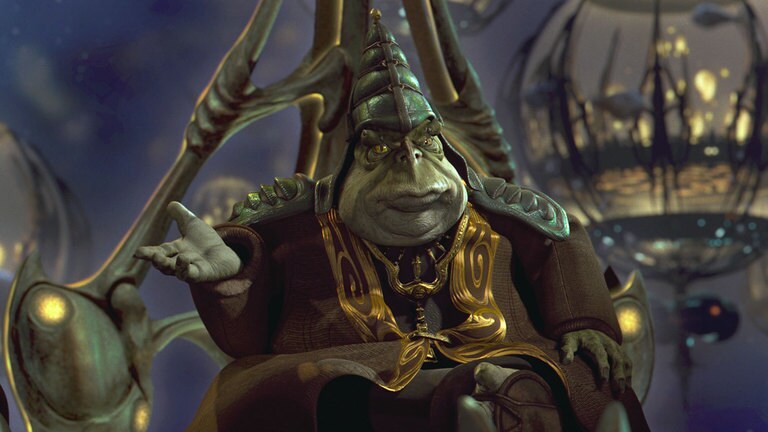 The Importance of working together

One of the biggest opportunities for personal growth in a character is the discovery that differences can be an extremely positive thing. Boss Nass asserts that the people of Naboo believe themselves superior to the Gungans. Obi-Wan is instantly skeptical the moment he meets Jar Jar Binks. Both Gungan and Jedi must subvert their preconceived notions and open their minds to the possibility that no matter what their differences are, they can only accomplish more by working together.

Certain characters, such as Padmé Amidala, are needed to help raise this awareness in the galaxy. The Queen emphasizes the power of negotiations to solve conflict and seeks to resolve the blockade issue by working together. An honest, respectful approach that seeks to illuminate the mind instead of manipulating others helps perpetuate trust.

Family, especially surrogate families, is important in Star Wars, and The Phantom Menace is no exception. Anakin eventually decides to leave his mother on Tatooine and joins his surrogate family, the Jedi. Obi-Wan Kenobi and Qui-Gonn Jinn share a brotherhood as Master and Padawan, and Jar Jar Binks steps away from the Gungans and forms a new family with Padmé and the Republic. The theme here shows the importance of family in all forms. A healthy family dynamic allows for the individual to become part of something greater, and together all parties become stronger. Only by becoming isolated does one lead down a dark path, which is why Palpatine seeks to isolate and break up the family dynamic.

These themes encapsulate important messages which communicate with audiences. We learn more about what is going on beyond the story and are entertained as well as educated. In two weeks, we will continue our exploration of the themes present in Star Wars: Attack of the Clones. In the meantime, what other themes present in The Phantom Menace speak to you?

Poll: Which Podracer is the Coolest - Anakin's or Sebulba's?

20 Things You Probably Didn’t Know About the Making of Star Wars: The Phantom Menace

From a Certain Point of View: What's the Best Scene in Star Wars: The Phantom Menace?