Twin Suns Setting and Beyond: The Perfect Star Wars Shots

ILM’s Hal Hickel and Todd Vaziri talk about their own work on Star Wars and pick their favorite shots in the saga.

From Luke Skywalker gazing wistfully at the twin suns to the X-wings swooping through the trenches of the Death Star, Star Wars is chock-full of iconic shots. But what’s going on in these images from a filmmaking perspective? To satiate our curiosity, StarWars.com sat down with Industrial Light & Magic’s Hal Hickel and Todd Vaziri to find out. They shared with us the emotional impact of their favorite scenes, the technical trickery of a Texas Switch, the challenges of hand-drawn animation, and much more.

StarWars.com: Thanks for taking the time to chat with us. Would you mind telling us what you do at ILM?

Hal Hickel: I’m an animation supervisor. I work on projects that have a lot of creatures or characters. I oversee a team of animators and it’s our job to figure out how to make stuff move the way the director wants them to.

Todd Vaziri: I’m a lead artist. I work in compositing, so I’m responsible for bringing together all the different elements of a visual effects shot. I take filmed elements like fire or smoke and layer them up with live-action or bluescreen photography.

StarWars.com: Which shots from the Star Wars franchise did you work on?

Todd Vaziri: I worked on the shot of the TIE fighters against the setting sun in Star Wars: The Force Awakens. This is right before the attack on Maz’s compound. I wanted to bring the iconography of TIE fighters to an Earth-like atmosphere.

Hal Hickel: That sequence has two iconic shots of classic Star Wars ships in different environments. The other one is when the X-wings come in over the water with those big rooster tails behind them. It felt really fresh and new.

Todd Vaziri: That’s exactly what J.J. Abrams wanted. He didn’t want to rely on nostalgia alone. He wanted to bring something new and different to the table. 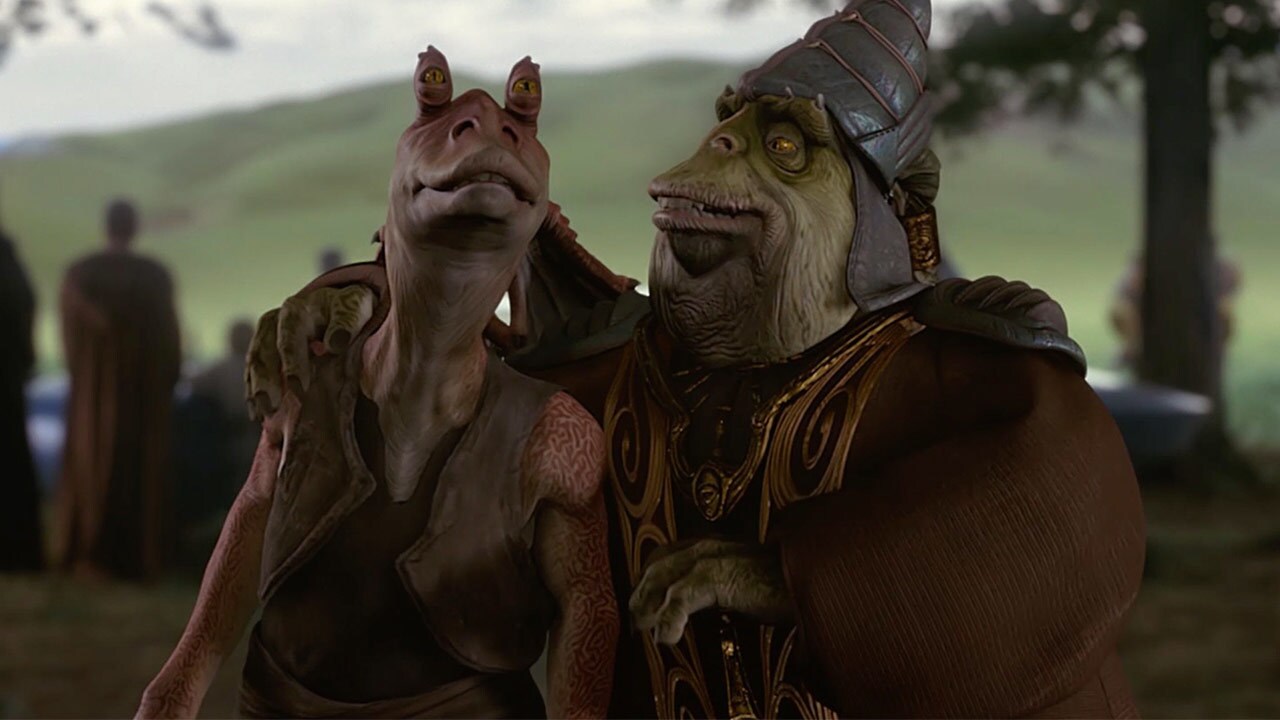 Hal Hickel: As for me, in terms of shots I animated myself, I was the lead animator on Boss Nass from The Phantom Menace. It was fun because he’s very broad, so I got to give him a lot of character. I also did the digital double work on the fight scene between Jango Fett and Obi-Wan on the loading platform in Attack of the Clones. I still like the way that sequence came off.

StarWars.com: Out of all the shots you worked on, which ones are you really proud of?

Hal Hickel: I supervised all the animation work in Rogue One, so that film is near and dear to me. I love the shot in Rogue One where the two Star Destroyers crash into one another. Not only did that shot materialize super late in the game, but the idea behind the movie was conceived by one of our own here at ILM [Editor’s Note: It was the legendary John Knoll.]. We created the Star Destroyer crash because we wanted the rebels to have a victory. We didn’t want to just make it all about retrieving the plans for the Death Star.

The whole series of shots where the Death Star blasts Jehda is incredible, too. They’re beautiful, but terrifyingly so. Our London studio did those shots.

Todd Vaziri: Rogue One was one of the highlights of my career. I worked on the shot where we see the Death Star for the first time. It’s a cool shot because it adds so much information in a short amount of time. As the shadows melt away from behind the Star Destroyer, you suddenly realize you’re seeing the station lights from the Death Star.

StarWars.com: Rogue One is so different because it feels more like a gritty war film than a fun space adventure. The original trilogy is definitely more lighthearted in tone. Speaking of the older movies, what are your favorite shots from those?

Hal Hickel: One of my favorite shots is the opening scene from A New Hope. When the first movie came out, I was 13 and living on a cattle ranch like Luke Skywalker. I wanted to touch the stars and go on an adventure. I was also interested in stop-motion and had to know everything about how the visual effects were made.

What really blew me away was how they made the first shot. The model for the rebel blockade runner was six feet long while the gigantic ship chasing it was about half the size. I had assumed the big ship was a large model and the little ship was a small model. There’s just so much energy and force to this shot. Plus, it’s the shot you think of when you think of Star Wars.

Todd Vaziri: The opening sequence is jaw-dropping. You’re just smashed right in the middle of it all. First you’re underneath this looming bad guy ship and then the camera tilts down and the planet comes into frame. The filmmakers are just daring you to soak it all in.

Hal Hickel: It’s a great example of flipping cards over one at a time to give you more information in a super dynamic and exciting way.

I also love the shot of Luke gazing at the twin sunset. It still gets me right in the feels. It’s so organic-looking and then you’ve got the swell of John Williams’ music. I just love it for its simplicity, beauty, and emotional punch. There’s nothing more classic than that shot.

The shot where the Jawas zap R2-D2 with their [blasters] is great, too. It might not seem like the most spectacular shot, but the blue electrical arcs crawling over Artoo are hand-drawn. That was unique and a whole visual effects craft of its own. Adam Beckett, best known for his contributions to the first Star Wars movie, was one of the foremost practitioners of that kind of work.

Todd Vaziri: There’s only a handful of people in the world that can handle that kind of complexity on a frame-by-frame level. It takes tremendous skill to give those blue arcs character.

StarWars.com: I had no idea those electrical arcs were hand-drawn! That’s amazing. You’re really opening my eyes to all the technical challenges. Can you dive into some of the technical aspects of your favorite shots?

Hal Hickel: The shot of Luke dropping into one of the trenches of the Death Star is absolutely fantastic. It’s the kind of shot audiences react audibly to. They essentially flew a small camera through a long miniature trench. The sense of travel is enormous even though they were working on a small stage space. The way the camera bobs and weaves make it feel like a ride film, too.

Todd Vaziri: What I like about this shot is that you actually feel like you’re on the nose of a rickety ship. If you’re banging a hard left, you have to figure out how to get level again, which will involve some bobbing and weaving. There’s an organic, imperfect aspect to it which adds a lot.

Hal Hickel: That’s why the original films were so innovative. The filmmakers were a bunch of young people interested in doing things in new ways. I mean, you don’t see ships swooping around like that in 2001: A Space Odyssey. They essentially mounted a camera to a boom arm and flew it through miniature trenches. It’s actually something that George [Lucas] demanded from the beginning.

Todd Vaziri: I love the scene in Return of the Jedi where the Ewoks are being dragged across the ground by an AT-ST. It really represents the imbalance of power and the overwhelming odds our heroes are up against. But what’s really cool about this shot is that the live-action actors are directly interacting with an animated AT-ST.

I can’t imagine the amount of planning it must’ve taken to get this movement right. The filmmakers had to figure out how far an AT-ST steps, if it’s going to move its leg unencumbered, and so on. There’s so much complexity to this shot and it goes by so fast. Hal, you know what I’m talking about right?

Hal Hickel: I do. I love it because it harkens back to Ray Harryhausen’s stop-motion work. It reminds of a scene from The Valley of Gwangi where a group of cowboys are lassoing a dinosaur. Ray had to line up the animated ropes and wires with real ones.

Todd Vaziri: Animating ropes in stop-motion is hard. It’s kind of an impossible thing. But when the animators manage to pull it off, it’s such a triumph.

There’s another shot from Return of the Jedi that has a lot of technical trickery in it. In one of the first scenes in Jabba’s palace, the camera cuts to a shot of the R2-D2 and C-3PO at the top of a staircase. As C-3PO moves down the stairs, the camera pans with him and then over to where Jabba’s sitting. The shot ends with C-3PO approaching Jabba and R2-D2 appearing from behind a nearby pillar. They achieved this shot by positioning a second R2-D2 model at the bottom of the stairs by the pillar. That’s called a Texas Switch.

StarWars.com: In your opinion, what’s the most beautifully designed shot in Star Wars?

Todd Vaziri: The shot where the Millennium Falcon flies toward the camera with the core of the Death Star exploding behind it in Return of the Jedi resonates with me on a technical and aesthetic level. There’s a real progression to it, too. First you’re inside these claustrophobic tunnels and then you’re zooming around inside the main reactor, which is huge and cavernous. The last part of the sequence has you going through those tight tunnels again, but doing the exact inverse. It has this rubber-band effect where the tension releases and then builds up again.

Hal Hickel: It’s easily one of the most beautifully designed shots in all of the movies. The energy of it is fantastic. You start off in that big open space where you’re given a chance to breathe for a moment and then the ball drops and the peril is back. When the tunnel comes back into frame around camera and ship, the kineticism of that scene is great. The sense of speed is amazing, too. You can sense that you’re moving fast but you don’t know how fast until that tunnel surrounds you. It’s like the first ride-film ever made.

StarWars.com: Do you have any advice for future animators and visual effects artists?

Todd Vaziri: My best advice for young visual effects artists is don't get caught up studying visual effects techniques until you understand the basics of visual storytelling. I'd say study non-visual effects movies to learn why we make movies in the first place and watch as many of the AFI 100 films as you can. As for the tools, don't get intimidated by complicated software packages. If you understand the concepts of what you're trying to do, trust that you'll be able to learn the software.

Hal Hickel: Don’t wait to be invited. Don’t wait for someone to give you your break. Don’t make excuses for not starting. If you’re saying, “I’ve got a film I want to make, but don’t have access to a camera,” or “I want to animate, but I don’t have access to the high-end software,” just get on with it. Don’t have a camera? Shoot that film with your phone. Don’t have expensive software? Use Blender, make flipbooks, or write your project. All you need is a pen and paper to get started.

Ashley Barry-Biancuzzo is an editor at Reviewed, a division of USA TODAY. She also occasionally writes for Geek & Sundry and StarWars.com.