Much to Learn You Still Have: Talking Rogue One Aliens with Pablo Hidalgo

Pao. Moroff. Two Tubes. Get all the intel on a whole new batch of aliens!

It's a new year and we're starting it off right with a special edition of Much to Learn featuring the Lucasfilm Story Group's Pablo Hidalgo! I got a chance to chat with Pablo about some of the aliens featured in his new book Star Wars: Rogue One: The Ultimate Visual Guide and got an exclusive closer look at some of my personal favorites.

StarWars.com: Thanks a bunch for taking time to talk to us about the aliens of Rogue One, Pablo! After seeing Rogue One, I, like I’m sure many others, had so many questions about those new guys roaming in the background. There’s one in particular that I recall from the first trailer -- he’s lying in the bed across from Jyn in prison and he has these glorious tentacles protruding from his face. Who is this guy and what can you tell us about him or his species?

Pablo Hidalgo: Well, one thing to clarify that he is actually a she. The novelization of Rogue One by Alexander Freed clarified that Jyn’s cellmate calls herself Nail. In prison, I guess it’s worthwhile to have a tough nickname. Turns out everyone else calls her “Kennel” because she’s got parasites. Her “real” name is Oolin Musters. And she is played by Kiran Shah (a man, but hey, that’s acting for you).

StarWars.com: Any idea why this new creature was chosen for this scene rather than a more familiar one?

Pablo Hidalgo: I know that this creature was originally designed to be a pedestrian in the streets of Jedha City. I don’t know if becoming a prisoner on Wobani is a promotion exactly, but at least Nail gets some more screen-time. Another bit of trivia for you: this alien’s production nickname was “Blue Top.”

StarWars.com: I couldn’t stop thinking about that gal, so I’m glad we got that out of the way. There aren’t too many non-human characters in Rogue One that get a significant amount of screen time, but we do get a lot of Two Tubes action. Edrio and Benthic are to me, terrifying, which makes me love them even more. These two are described as Tognath “egg mates,” not necessarily brothers. Can you explain what that means?

Pablo Hidalgo: Tognath hatch from eggs that nurture in a suspension jelly. While in that jelly, two or more eggs might graft together and create a bond that continues throughout their life. But, those eggs don’t have to come from the same parent. 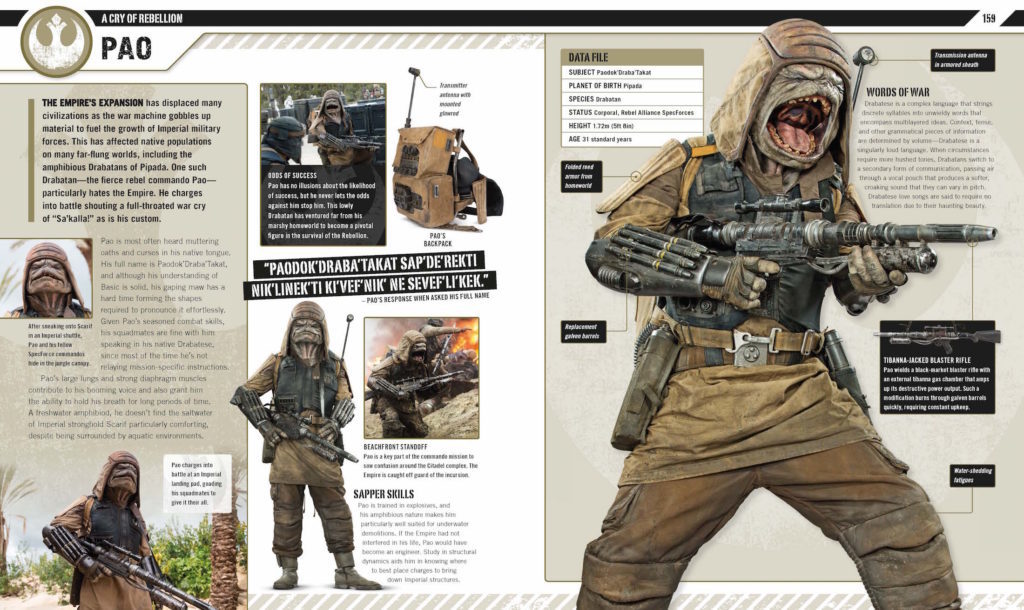 StarWars.com: Another new alien we get to see a bit of is Pao. Pao is my favorite Rogue One character (and maybe one of my favorite alien designs of all time), but after seeing the movie I knew so little about him. Well, aside from the fact that he likes to scream battle cries with his gigantic Muppet-like mouth. Is this typical of his species, the Drabatans?

Pablo Hidalgo: I think Pao may be a bit more gung ho than your average Drabatan, but I hope his people would be be proud to consider him a representative of their species. One story idea I wanted to put in the Ultimate Visual Guide was that he had a mild-mannered civilian life prior to joining the Rebellion. He was an engineer who felt he had to do something about the Empire.

StarWars.com: Before we move on I have to ask: Drabatese love songs have a haunting beauty? This little tidbit in the Visual Guide cracked me up. From a behind-the-scenes standpoint, how do you come up with these totally-not-relevant-but-amazing fun facts?

Pablo Hidalgo: Wherever possible, I try to talk to the Neal Scanlan in the creature shop to ask about what were their inspirations in creating a character. When I visited the Rogue One set, I had a crash-course in the aliens. In the case of Pao, the idea that he had these amphibian roots was too good to resist. And I thought it would make a fun contrast to the giant shouting mouth to show the softer side of Pao. StarWars.com: One of the aliens that was getting a huge buzz, particularly after Star Wars Celebration Europe, was Bistan, or “Space Monkey,” as we lovingly called him. I, for one, did not expect he would make actual monkey noises, so that was a pleasant surprise. The planet Iakar is described as a jungle where Bistan would swing from tree to tree. If we visited Iakar, would there be a bunch of swinging monkeys or are the Iakaru more human-like on the day-to-day? Since Bistan wears a sweet space suit I could imagine they at least wear clothes while they’re swinging?

Pablo Hidalgo: Though they’re not a space age people, I don’t see them as primitives. They’re beyond Ewok technology but maybe not as technically inclined as Wookiees. Also, I think Bistan is probably wilder than the average Iakaru.

By the way, I named the Iakaru after the Amazonian uakari monkey, but in doing so, I created the potential for the most misspelled alien name ever, since people are inclined to read that capital “I” in Iakaru as a lower-case “L”. Sorry, everyone.

StarWars.com: Aside from the new guys, we see the return of some familiar alien faces, as well. There are both Twi’leks and Mon Calamari in Rogue One. We talked a bit about the new Mon Cals in a previous post, was there any specific reason for making them the new polar variety?

Pablo Hidalgo: The color design came from production; I rationalized it by making it specific to an environment. But I love the idea of diversity within an alien species. We’ve seen a wider variety of Mon Cal colors in The Clone Wars than just the red ones. I think having the colorful ones be from tropical environs and the black-and-white ones be from colder extremes work with Raddus’ no-nonsense personality. It also allows for someone to make “cold fish” jokes. 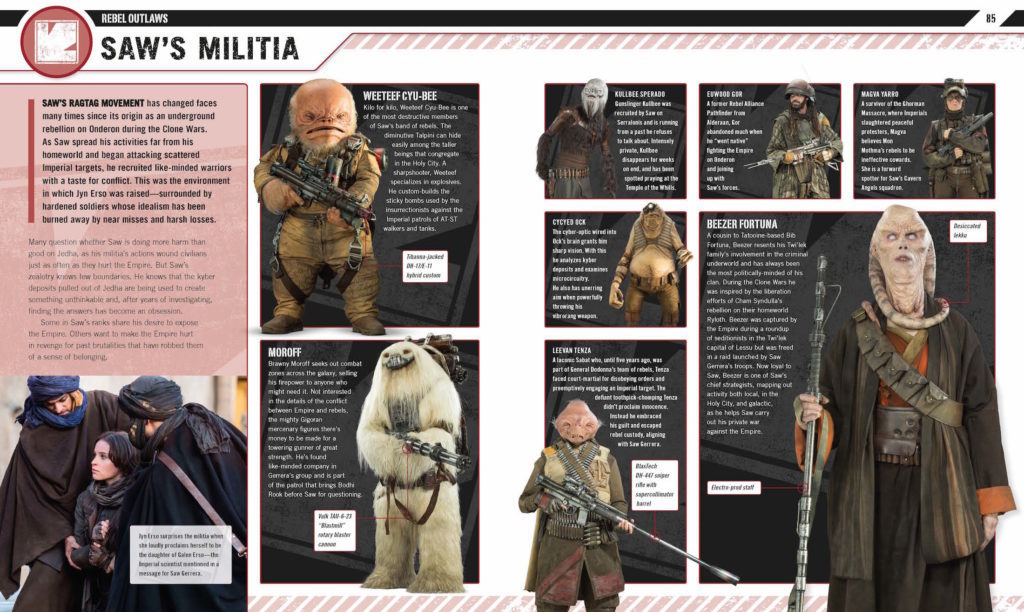 StarWars.com: Warwick Davis makes his return as Weeteef Cyu-bee, who is a member of the Talpini species. Any fun facts about these little guys?

Pablo Hidalgo: A couple of people have asked if the Talpani might be the same species as Maz Kanata, but that is not the case. You can tell if you take a look at Weeteef’s ears -- they’re quite long but he has them folded back.

This alien’s production name was “Tiny Teef,” because he does indeed have little tiny teeth. When it was decided his “real” name was Cyu-Bee, I insisted that Cyu-Bee only be part of his name and that perhaps his full name started with “Weeteef." That not only kept his adorable production name in place, but continued the tradition of Warwick Davis playing characters whose names begin with the letter W (Wicket, Wald, Weazel, Wollivan, and now Weeteef).

StarWars.com: Speaking of Saw’s gang, it’s hard to miss Moroff trudging through the crowded streets of Jedha. We know this guy’s a hired gun. Is that common for the Gigoran species or are they ever gentle giants, too?

Pablo Hidalgo: For Moroff’s species, I reached back to the old Expanded Universe lore and plucked a very obscure alien from the old roleplaying game. There was a character named Rollos who was a Gigoran in a 1994 story. They have a lot in common with Wookiees in that they’re often exploited for their strength, but a few tough ones have found a way to make that work for them by becoming brutes for hire. So the ones you’re more likely to run across in the galaxy are thugs, as we saw in the Doctor Aphra comic. 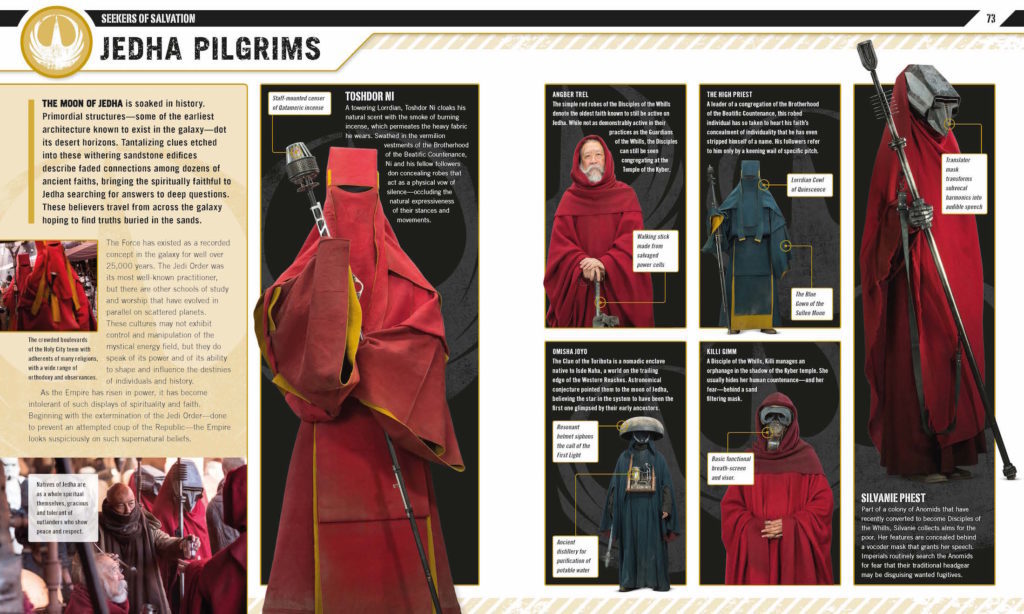 StarWars.com: On Jedha, we see some crazy looking civilians. Some of them are wrapped in cloth and don't even show their faces, like the Central Isopters or the Lorrdians. Is it safe to assume there are humans under these cloaks, or can they be any sentient species?

Pablo Hidalgo: Their cultural identifiers indicate their faith, but not their species. So it can be anything under there, I suppose (provided it fits humanoid proportions).

StarWars.com: Bonus question: Does Kullbee Sperado have a species? He’s SO cool-looking and I would love to see more of him in every film going forward. I want to know why he’s running!

Pablo Hidalgo: Some have wondered if he is a Lasat. He is not, but his species has not been established. His name is a combination of his production nickname (Skullbeard) and the word “desperado” since he looks like an Old West gunslinger! And like the best of the old gunslingers, he doesn’t talk about his past.

For even more info about all the awesome aliens discussed in this interview, pick up a copy of Pablo's latest book, Star Wars: Rogue One: The Ultimate Visual Guide available now from DK!